Every Malaysian knows about Madam Kwan, and the popular chain’s nasi lemak and nasi bojari. And for many first-time business visitors to Kuala Lumpur, Madam Kwan would probably be the first place they are brought to in order to have a taste of “Malaysian cuisine”.

Although Madam Kwan, the chain, just started in 2009, its pedigree goes back a bit further. Back then, a very talented and industrious young woman by the name of Kwan Swee Lian first started her own business in the 1950s - but it was not a food joint, rather, a hairdressing salon called Sakura Beauty Salon. However, after 20 years, she tired of her choice of vocation and converted her business overnight to become Sakura Cafe. That was back in 1977. Back then, Kuala Lumpur does not have many places which serve hawker/street fare in a more “upmarket” environment. So, just as Chatterbox in Singapore became an overnight sensation by serving humble fare like Hainanese chicken rice in a hotel restaurant setting, Sakura became KL’s toast of the town for its nasi lemak, a dish often sold on street corners by itinerant food peddlers from little foldable tables. Its use of imported Japanese cutlery and tableware was also a first for an independent cafe in Kuala Lumpur in those days.

Madam Kwan’s nasi lemak was a luxe version, though - for a start, her rice was milkier and richer with the use of higher amounts of good quality fresh, creamy coconut milk, slightly salted to give it a nice flavour. We don’t see any ginger nor pandan when it’s served, but these were most likely used during the cooking process to give the rice its subtle aroma. Madam Kwan’s nasi lemak is served with a very rich-tasting, thick Chinese-Malaysian chicken curry (I say Chinese-Malaysian because Malay-Malaysian curries tend to be more liquid, and with much lesser coconut milk used). There is also a sambal ikan bilis - a spicy relish of tiny crisp-fried anchovies with onion rings, cooked in a spicy chili-tamarind gravy. Toasted groundnuts, half a hard-boiled egg and slices of fresh cucumber - all traditional and indispensable accompaniments to the rice - complete Madam Kwan’s nasi lemak platter. It was my favourite ever since I had my first taste of it in Sakura Cafe on Jalan Imbi back in the early-80s. 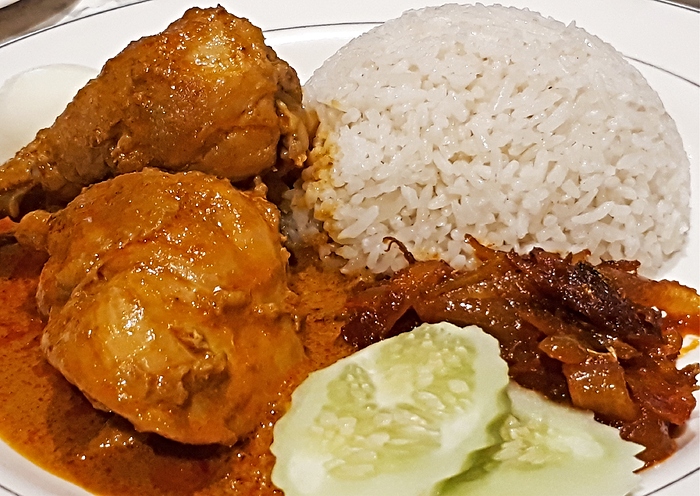 Madam Kwan is also well-known for her Nasi Bojari, a unique (and much-copied) rice dish which she invented herself - although Madam Kwan attributed the idea of the dish to a certain Mdm Chin who served it to her in Singapore back in the 70s. Madam Kwan never knew the recipes, but concocted her own take on the dish: a tri-coloured steamed rice dish, served with a large piece of spiced, fried chicken leg, a melt-in-your–mouth beef rendang (best ever!), large prawns cooked in spicy chili-tamarind gravy, half a hard-boiled egg, and slices of cucumber and tomatoes. 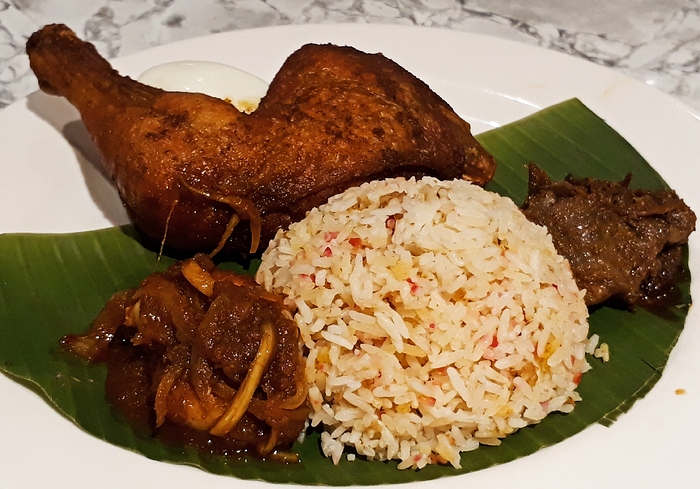 However, Madam Kwan had to sell off Sakura Cafe when she lost much of her fortune during the 1997 Asian financial crisis. The buyers retained her as the chief cook for a year before turning her out into the streets! That was, in her words, the lowest point in her life. But the feisty Madam Kwan persevered.

And in 2009, her son & daughter-in-law put up the money for her to open the first Madam Kwan Restaurant in Bangsar, then KL’s most hip and trendy dining precinct. The menu at Madam Kwan was exactly as the one she had at Sakura Cafe.

But whilst Madam Kwan, the restaurant was on the uptrend, Sakura Cafe began its slide into ignominy. Like they say, karma is a b*tch. In 2003, Sakura Cafe also hit the headlines in both Malaysia and Singapore for the wrong reasons when a triad godfather was shot & killed gangland-style by two hired assasins whilst having his supper (nasi lemak?) in the restaurant. Last I heard, Sakura has shuttered its doors permanently just last year.

In the meantime, Madam Kwan has continued to pack in the crowds. We had dinner there last Saturday at its main outlet in Suria KLCC mall, beneath KL’s iconic Petronas Twin Towers, before we attended the Malaysian Philharmonic Orchestra’s concert at the sumptious Petronas concert hall a mere 5 minutes stroll away from the restaurant. 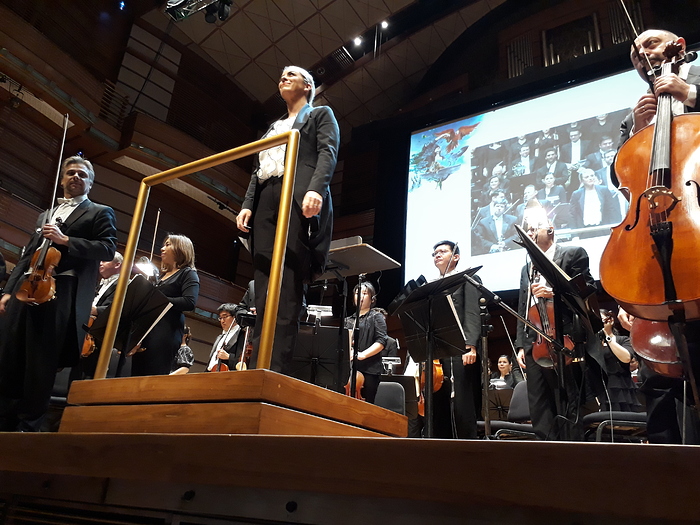 Be prepared to wait for a table at Madam Kwan’s Restaurant - it’s first-come-first-served. 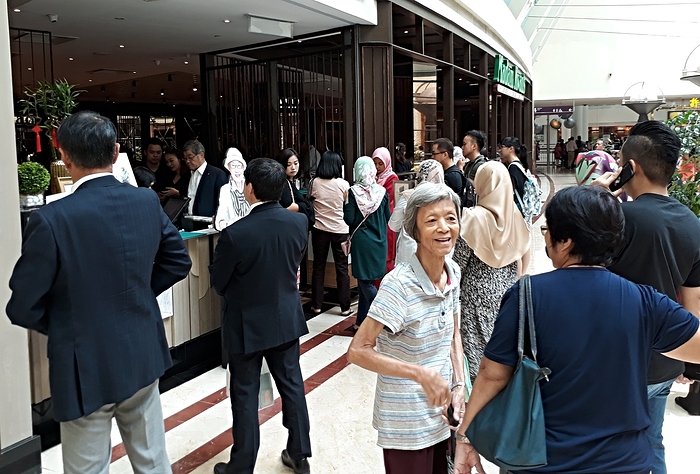 P.S. - Madam Kwan also serves one of the best satays in KL, don’t miss it! 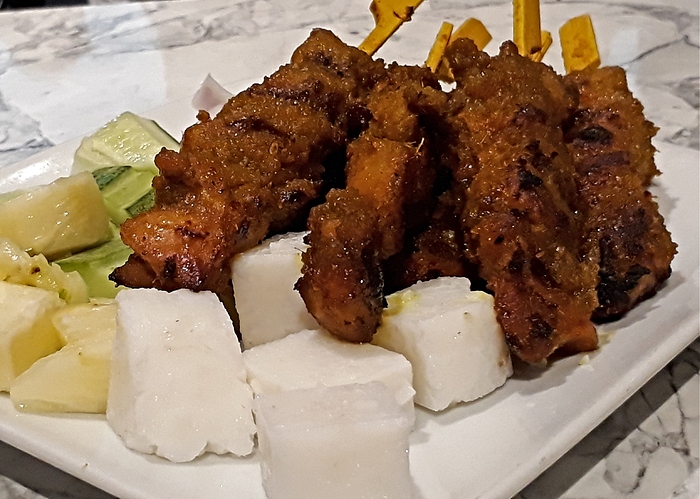 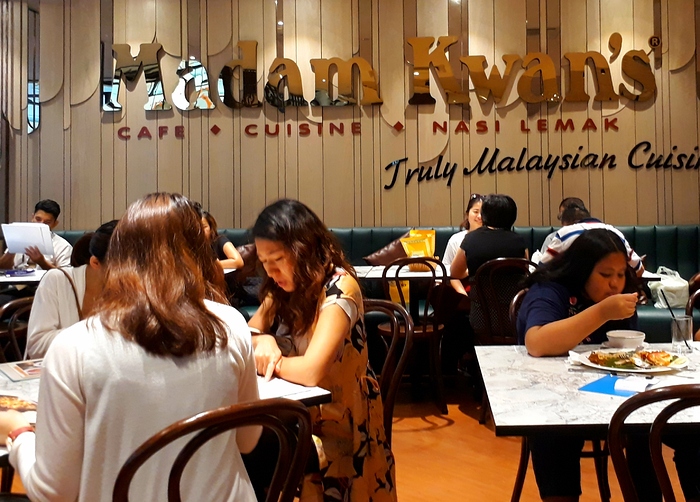 Great story, Peter. I love it when anyone puts food into its social/historical context. Thanks.

Thanks for the background and the life of Madam Kwan. The context gives a different appreciation of what is in the plates.

Madam Kwan had a very eventful life. She’s now 84-years-old - still insists on cooking 100kg of beef for her rendang curry each morning at the break of dawn, supervise the kitchens and, by noon, go out to meet & greet customers at Madam Kwan Restaurant’s busy Pavilion outlet. She’s never been seen without a hat. 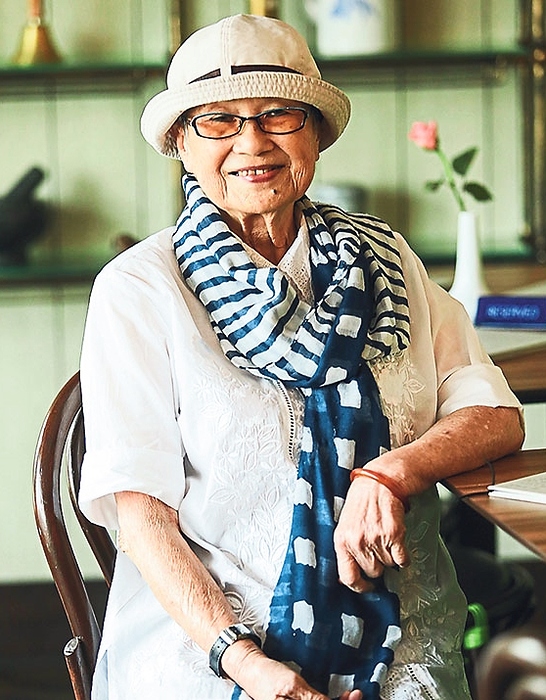 I read more about her, a bit shocked that it was not her intention to cook when she opened Sakura Cafe:

“Originally when I started the restaurant, I never thought I would be the cook as I was not interested in cooking but the chef I hired worked for 10 days and quit,” she said.

Madam Kwan learned to cook by making the dish over and over until she got it right. “Since I’ve eaten it so many times, I kept testing until I got it right. If it was not good, I threw it away and did it again.”

A perfectionist and has a very persistent character, interesting read. 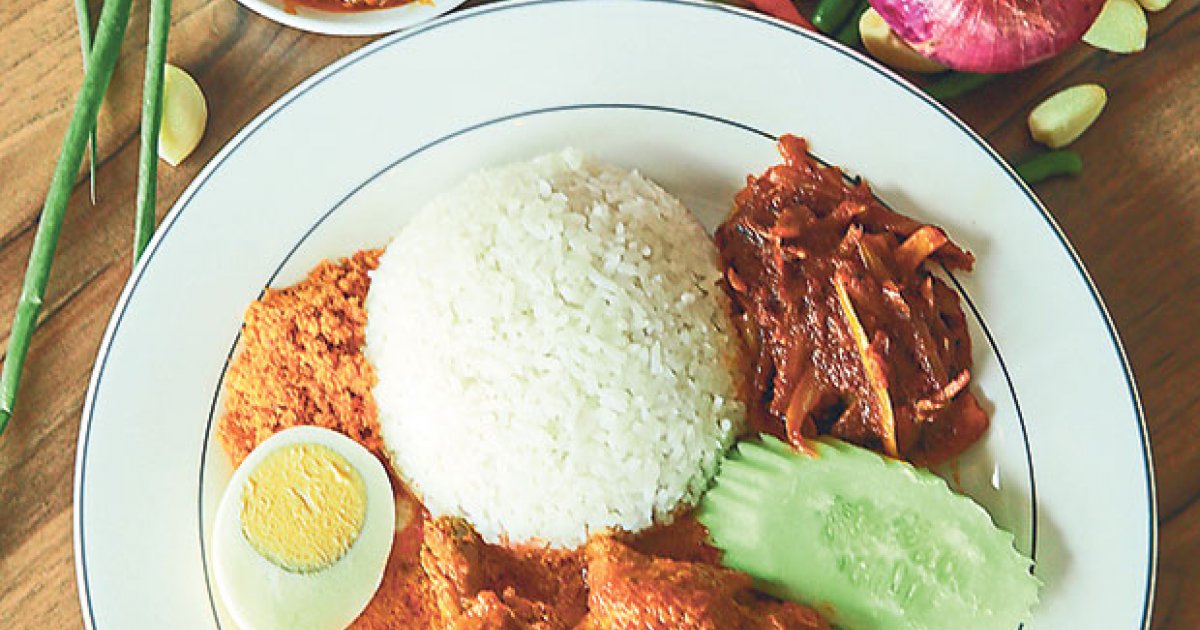 KUALA LUMPUR, July 5 — You have probably tasted Madam Kwan’s iconic nasi lemak at some point. Believe it or not, the recipe is from a person who hates to cook. The namesake of the popular Malaysian restaurant, Madam Kwan Swee Lian, 81 admits that...

but the chef I hired worked for 10 days and quit

Very risky to rely on one chef if you’re starting a restaurant. I’ve seen so many promising new restaurants fall wayside when their chefs left.

Best depend on oneself to cook.

Best depend on oneself to cook.

She is a good cook and has also the spirit of entrepreneur. I have heard quite a few stories of good chefs opening their own restaurants but closing doors due to poor management skills.

Did you ever have a chance to taste her food court stall in 1 Utama after she was fired from Sakura Café around 98 or 99?

Among the different restaurants of Madam Kwan, which one(s) do you recommend, or they are all good?

In this interview, she said she has stopped cooking 1 year ago due to her old age, but she still goes to the restaurants to scold the staff for quality control.

Did you ever have a chance to taste her food court stall in 1 Utama after she was fired from Sakura Café around 98 or 99?

No, I’d never had the chance to try her cooking during her stint at 1 Utama. I lived in Singapore and, until 2011 when I moved to KL, I think I’d visited KL less than 10 times between 1990-2010, staying only for a few days each visit. So, honestly, I am actually even more familiar with Hong Kong than Kuala Lumpur, although the latter is only an hour’s flight from Singapore.

I think, in terms of quality of cooking and service, I prefer the ones at KLCC (reviewed above) and at the Pavilion, which is KL’s swishest mall in the Bukit Bintang retail belt. I didn’t like the one in Bangsar Shopping Centre, which was just 15 minutes’ walk across the street from my KL apartment, as the cooking there seemed uninspired.

I think the Madam Kwan group should try to rotate its chefs between the different outlets, in order to ensure some level of consistency between them and also prevent complacency in some outlets.