Kuala Lumpur will lose yet another of its traditional, old Hainanese coffeeshops when Sin Hoy How (founded 1937) on Jalan Tun HS Lee shutters its doors for the last time at the end of this month. It’ll become the latest casualty of the COVID lockdown which has claimed hundreds, if not thousands of businesses, in Kuala Lumpur. 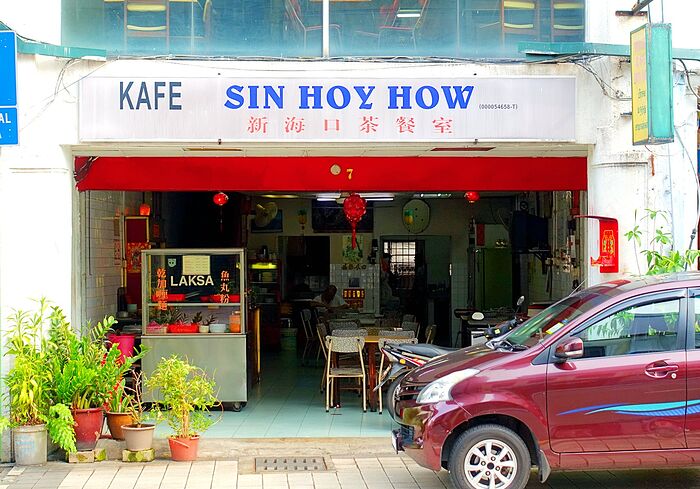 Sin Hoy How, meaning “New Haikou” in Hainanese dialect, is named after Haikou, the capital city of the island province of Hainan in Southern China. Its founder, Lee Kah Kiat, came to Kuala Lumpur from Hainan Island as a plucky 12-year-old lad, who worked his way through a string of Hainanese coffeeshops that used to dot Kuala Lumpur’s old downtown during most of the 20th-century.

In 1937, having learnt all the tricks of the trade, he opened his own coffeeshop, which has since seen Kuala Lumpur grow through the decades. His 3 daughters now run the place, but they have decided to bring forward their retirement as the harsh COVID lockdown has made their business untenable nowadays. 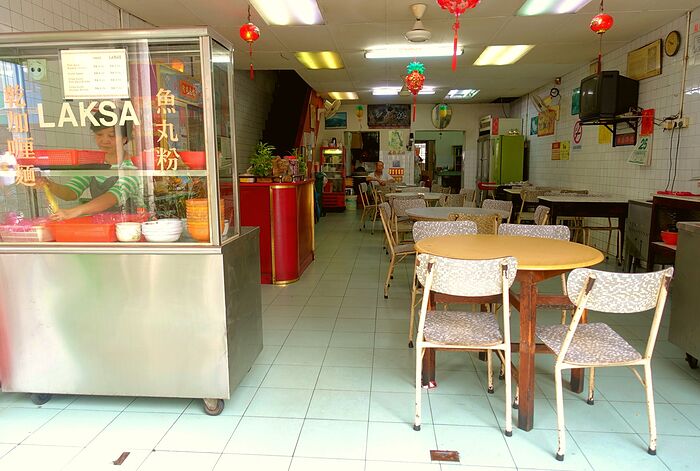 Up till 1997, Sin Hoy How only served its popular Hainanese-style coffee (which they brewed using coffee beans which they’d roasted themselves in-house), and toasts filled with kaya, the rich, sweet, custard-like Hainanese egg-coconut crème spread which the Lee sisters prepared from scratch in a laborious 12-hour process that involved a lot of hand-stirring over a charcoal-fired double-boiler.

Post-1997, in order to compete with newer cafes and eateries that popped up around them, the Lee sisters started offering one-dish meals, as the majority of their clientele were office workers from the surrounding offices in KL’s banking/financial district looking for quick lunches. Their Hainanese chicken curry, served with rice, noodles, or simply with toasted bread, proved to be the most popular. 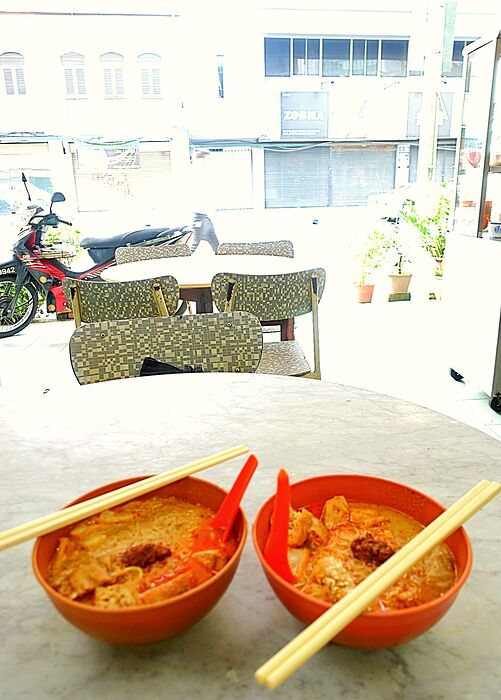 As the years went by, Sin Hoy How settled into its present form: serving its coffee with toasts and soft-boiled eggs, besides its now legendary chicken curry noodles, which can entail up to 45-minutes’ wait at peak dining periods. That was back in the “good old days” before the COVID pandemic hit. 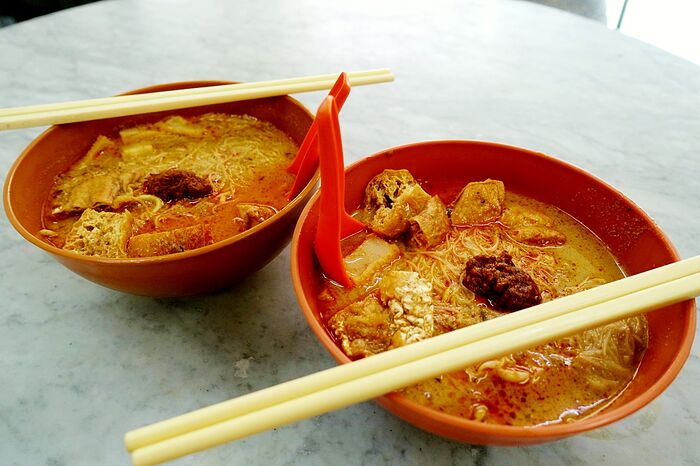 Roasting of their house-brand coffee beans was no longer done in-house in recent years, but outsourced, whereas its Hainanese bread was procured from a bakery based in Cheras, an outlying KL suburb.

We were last at Sin Hoy How in May 2019, half a year before the COVID pandemic reared its ugly head in Wuhan, China. No one in the world at the time knew how lethal the virus was going to be, and how much it’s going to change our lives forever.

During our May 2019 visit, we ordered the curried noodles and the coffeeshop’s signature frothy hot, freshly-brewed coffee. The curried noodles came with your choice of the type of noodles: yellow wheat noodles, rice vermicelli, or flat “hor fun” noodles. We opted for a mix of yellow wheat noodles and rice vermicelli. The broth was fairly liquid, very faintly spiced and tinged yellow with turmeric. The garnishes were sliced fish-cake, tofu puffs, and some shredded chicken. Each bowl of curried noodles was topped with a dollop of red-hot chili paste, to be stirred in for added potency. 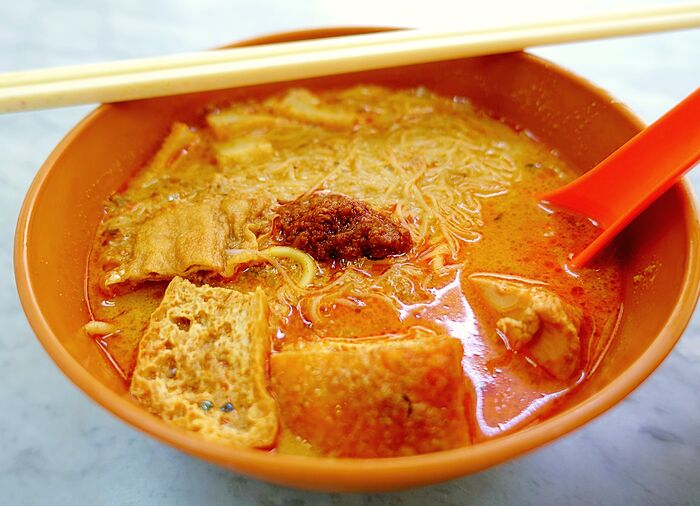 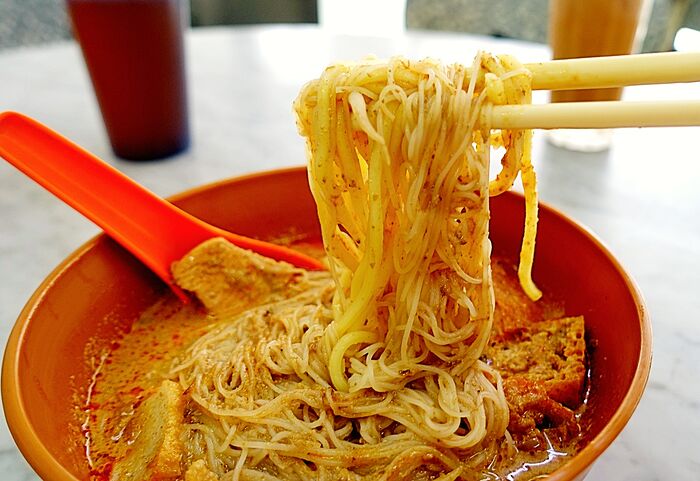 Hainanese coffee tended to be quite rich, and slightly sweet, as the coffee beans were usually roasted with sugar, which would caramelize during the process, plus some butter for added richness. 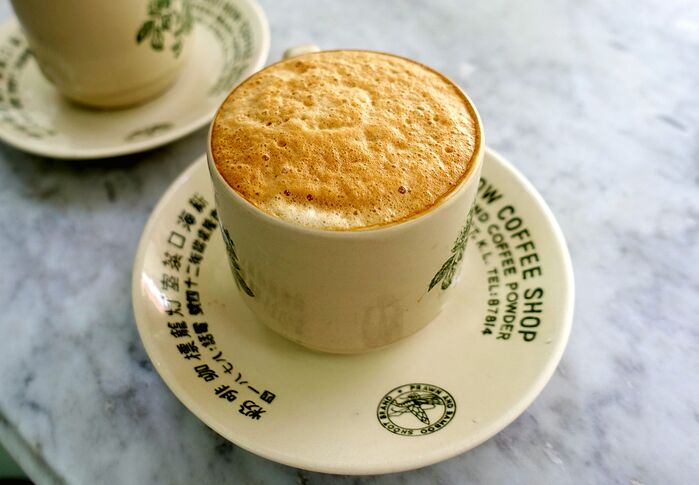 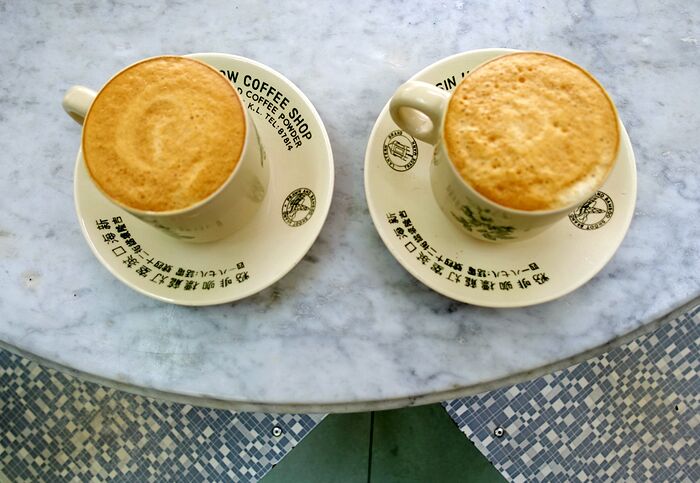 Lee Chew Boey, founder Lee Kah Kiat’s eldest daughter, best-known as Auntie May to her regulars still runs the coffeeshop, assisted by her sisters, known as Auntie Lily and Auntie Kam. With business slowed down by up to 90% because of the pandemic, the sisters were more amenable these days - they used to be known as “The Angry Sisters” for their knack of snapping at impatient or annoying customers.

These days, take-out business is terribly slow, and is not enough to sustain their coffeeshop. Dining-in has been banned in Kuala Lumpur for months, walk-in business has slowed to a trickle, and few would order toasts or soft-boiled eggs as take-outs. Orders for their curried noodles fared much better, but it’s still far from sufficient to make their continued operations worthwhile.

So, come end-July, an 84-year-old Kuala Lumpur dining institution will bite the dust, and fade into history as yet another casualty of the on-going COVID pandemic which still showed no signs of abating.