IMO, Chef Trakool “Korn” Yodsuk is hands-down the best Thai chef in Kuala Lumpur, in fact, the whole of Malaysia! His breakthrough restaurant, Erawan in Kota Damansara, had raised the bar for Thai food in Malaysia to a whole new level when it first opened back in late 2009. With his careful attention to detail, and his finesse in producing Royal Thai dishes previously not seen in Malaysia, Chef Korn managed to elevate the status of Thai cuisine among Malaysians from the ordinary (think, pandan-wrapped chicken) to fine dining status. Some of his offerings back then included miang kham (Thai: เมี่ยงคำ) using fresh lotus petals instead of wild betel leaves for wrapping. 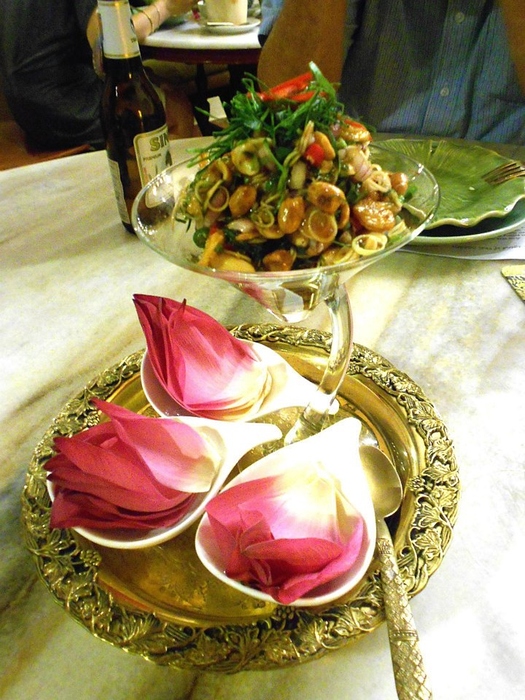 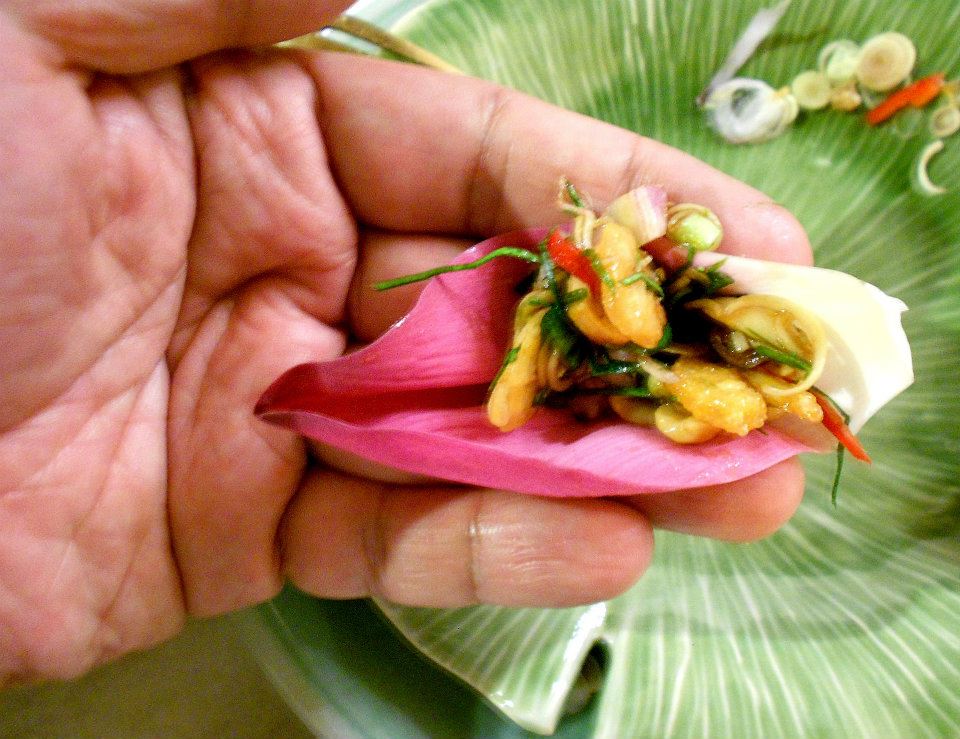 Another one of my favourite dishes there was the rhoom, also known as la tieng (Thai: ล่าเตียง) , a popular Royal Thai dish dating back to the rein of Rama II. These are delicate little parcels made from egg-nets used to wrap a stir-fried filling of meat/shrimps/peanuts. 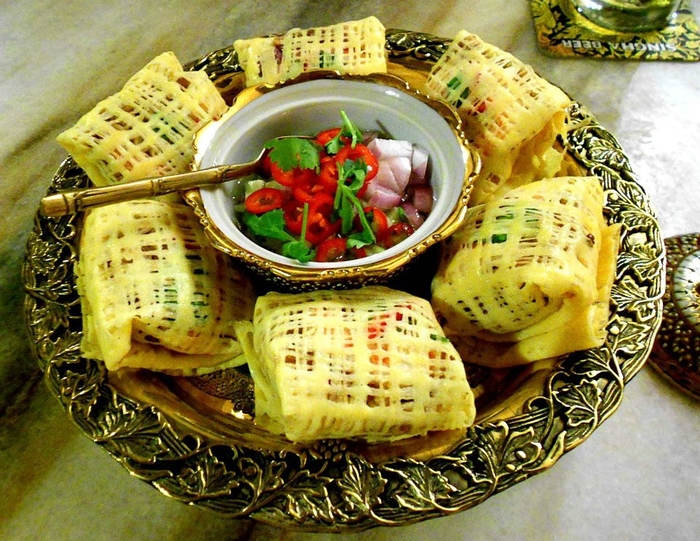 Then, came the move to DC Mall at the upmarket Damansara Heights neighbourhood, which opened in Sep 2016, with new business partners providing the financial backing for an even swisher version of Erawan. Erawan at DC Mall, despite its stratospheric prices, continue to draw in the affluent crowds from nearby Damansara and Bangsar on the strength of Chef Korn’s stellar reputation.

All of which, of course, bring us all to the surprising news that Chef Korn and his brother, Anann (the front-of-the-house host extraordinaire) had severed all ties with the restaurant which they founded late last year, and has now moved on to a new venture: La Moon in Taman Tun Dr Ismail (TTDI). The new one-month-old set-up looked less severe than the DC Mall incarnation of Erawan - lofty ceilings and floor-to-ceiling glass walls that resulted in the bright, airy feel of the dining room.

Anann was there, his usual, infectiously effervescent self. And Chef Korn - consistency is his middle name: for he brought along his old crowd favourites and produced them perfectly in this new month-old kitchen without missing a single makhuea phuang (Thai: มะเขือพวง).

La Moon ticks all the boxes for what I look for in a good Thai restaurant. Prices are high, as always is the case with Chef Korn’s ventures. But then, this is the place one comes for the best Thai food in KL, if not actually in Malaysia. 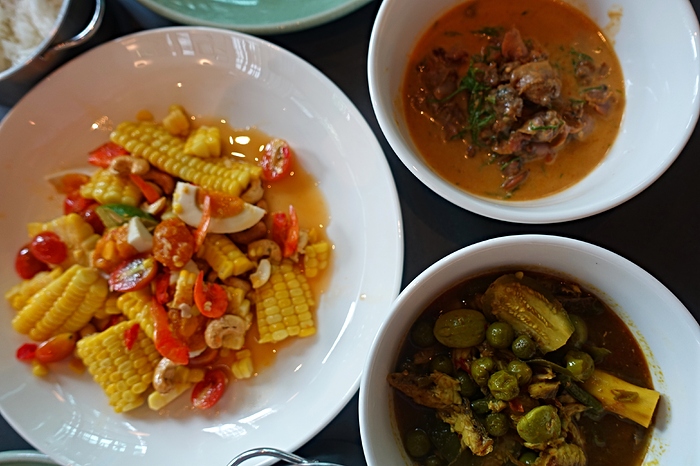 That’s a winner on all counts.

Thanks much for this very enlightening review. Have just moved to TTDI and was excited when I heard of Chef Korn’s new place here. We were at Erawan for lunch, food was ‘glorious’! So, the price tag of MYR450/-, sans wine, for 2 was very much acceptable.
Will be paying a visit to La Moon very soon.

But he cooks so well, and we are pretty deprived of good, authentic Thai food in Malaysia.

Like the look of cockle curry. Can you describe the taste of the curry? I could try making it but then without coconut milk (if it contains any). I can pick up some Thai curry paste for this, such as “Massaman”.

The crab omelette looks great also. I can imagine crab anything comes at a cost. It takes time to extract the meat. Can you describe the taste of the curry? I could try making it but then without coconut milk (if it contains any). I can pick up some Thai curry paste for this, such as “Massaman”.

It did taste like Chef Korn has added coconut milk into the curry, not a lot, but just enough to cut through the spiciness.
The curry itself tasted closer to “Gaeng Pa” (Jungle Curry) than the sweet-ish “Massaman”.

Thanks, Klyeoh! I shall make it a bit differently… without coconut milk.

Thanks, Klyeoh! I shall make it a bit differently… without coconut milk.

Cool! Do let us know how it turns out.

Yes, it’s the kind of place you go to when you want to be ‘very good’ to yourself, or others. Or, when in very desperate want for great Thai!
You’re right about us being “pretty deprived”.

A new discovery (for me) is Chef Korn’s Corn Salad ,

I want that. Now.

I made the curries with shellfish. 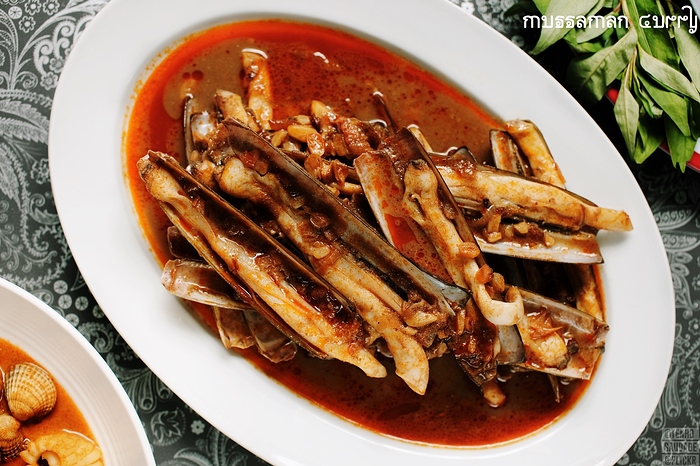 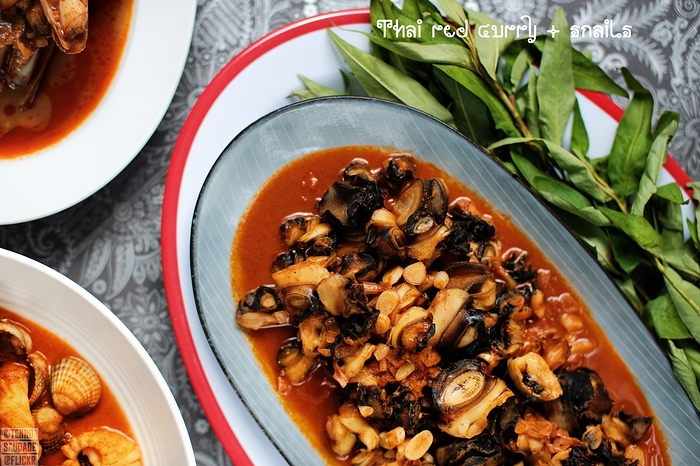 This one has coconut milk for the partner. With squid and cockles. 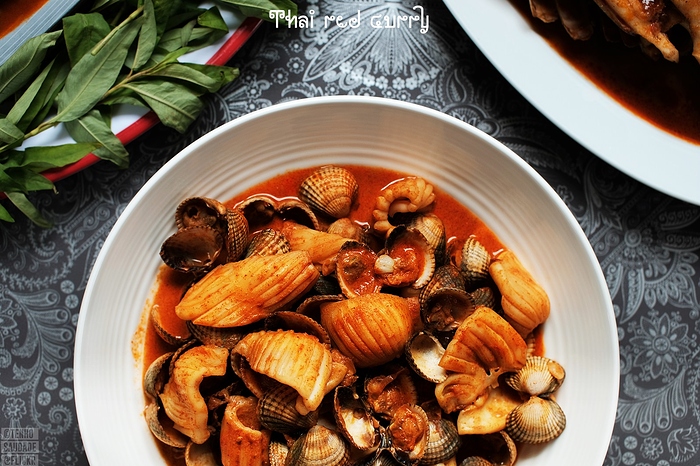 I made the curries with shellfish.

Back to Erawan recently for lunch. The piece de resistance this time was the lump crabmeat curry - rich, luscious, and with an incredible amount of super-fresh crabmeat. I just found my single favourite dish in Kuala Lumpur, irregardless of type of cuisine. 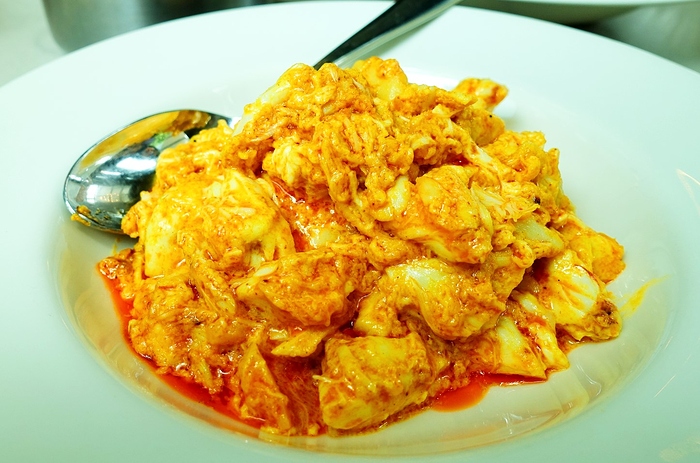 Of course, one can’t go to La Moon and not order the corn salad. I’ve run out of superlatives to describe this dish: the corn kernels provided bursts of sweetness, whilst the toasted cashews provided some nutty crunch, salted duck’s egg lent a salty, savoury depth to the salad, but the winner was in the dressing - sweet, salty, spicy, with a fragrant citrusy tang. Chef Korn is a master at obtaining the perfect balance of flavours. This was sunshine on a plate. 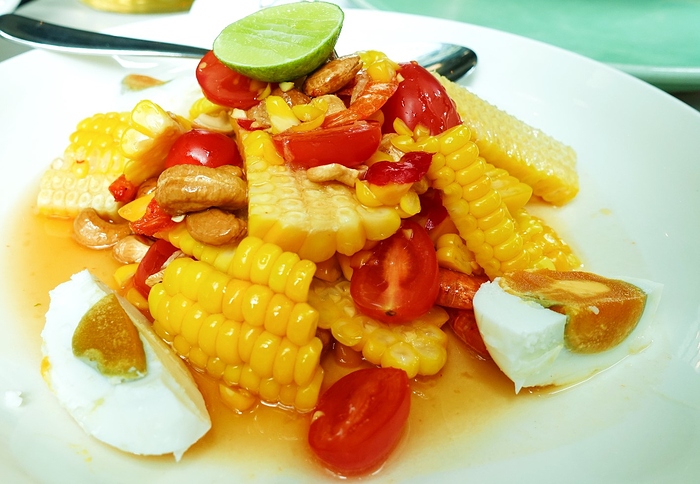 The cha-om omelette which came next brought us down to earth with a thump. The fat, sinfully-rich eggy disc was fried the same way Bangkok’s famous Jay Fai does her crabmeat omelette, i.e. gradually basting the egg mixture over hot oil till it’s metamorphosised into a gigantic, edible pillow of deliciousness.

But we already had a crab dish in our curry order, so we opted for the cha-om omelette instead. In Thailand, A large omelette is usually prepared, then cut into 2-inch squares, to beaten with a nam prik dip, or else slipped into a kaeng som soup. I think those “traditional” approaches would work more than this one we had here, which I found to be rather heavy, bland and unexciting: 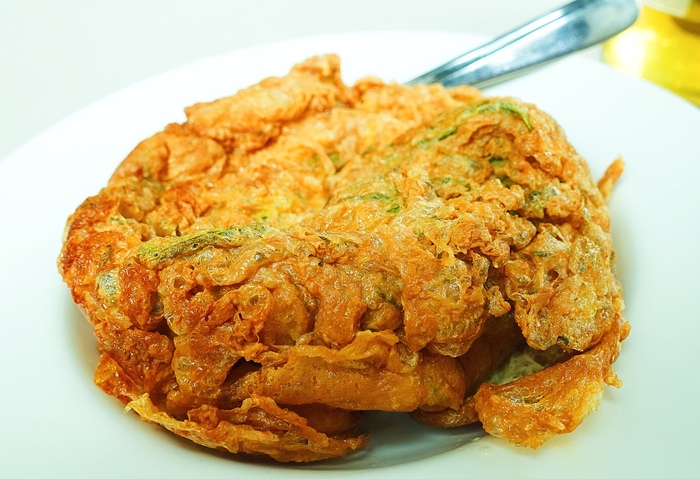 The only dessert was, again, the tub tim krob - this one tasted better than the last one we had a few months back but still didn’t rise beyond the ordinary. Chef Korn is unrivalled where cooking is concerned, but I think he still needs a pastry/dessert chef. 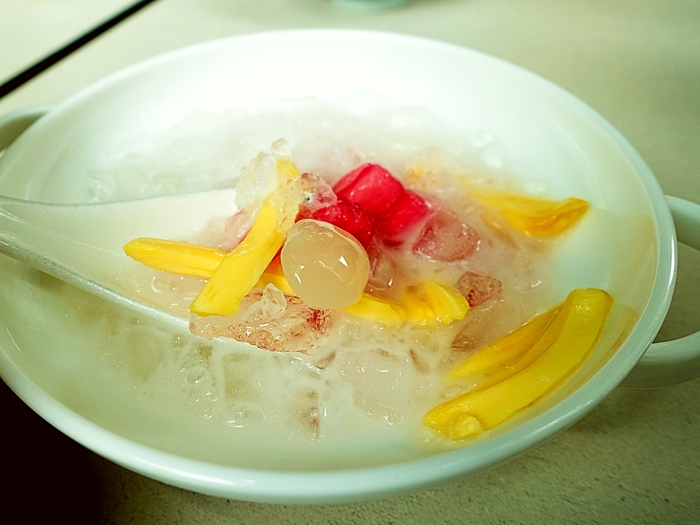 Come for the savoury dishes - Chef Korn is extraordinary in this respect. Just go somewhere else for coffee and dessert afterwards. 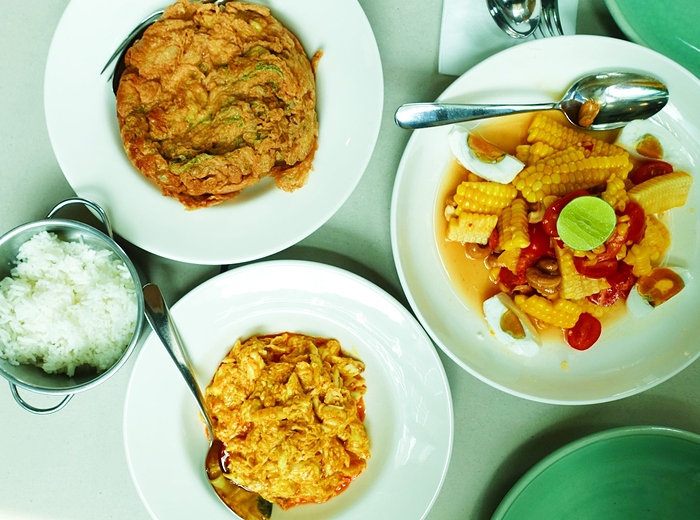