Dewakan came to the notice of foodies here with its inventive take on local Malaysian herbs and fruits/vegetables, weaving them into its dishes which uses more formal (French-influenced) techniques, with some molecular gastronomy touches. Chef Darren Teoh is a lecturer-cum-chef at the culinary school where this restaurant is located.

Dewakan has also just become Malaysia’s first-ever entry in the 2019 Asia’s Best Restaurants List, now into its seventh edition. So, a visit was definitely on the cards - we’d been delaying it for years because of the rather isolated location of the restaurant, incongruously perched at the bottom of a monolithic academic building within a college campus situated 23km from Kuala Lumpur city centre, and with an unavoidable 1.5 to 2-hour car journey thru KL’s energy-sapping traffic crawl in the evenings. But we decided to brave it this time.

The cream-coloured dining room was pretty spartan, with well-spaced tables (which did nothing to alleviate the noise coming from a loud table of guffawing diners next to ours), serviced by a slick, efficient team of wait-staff. 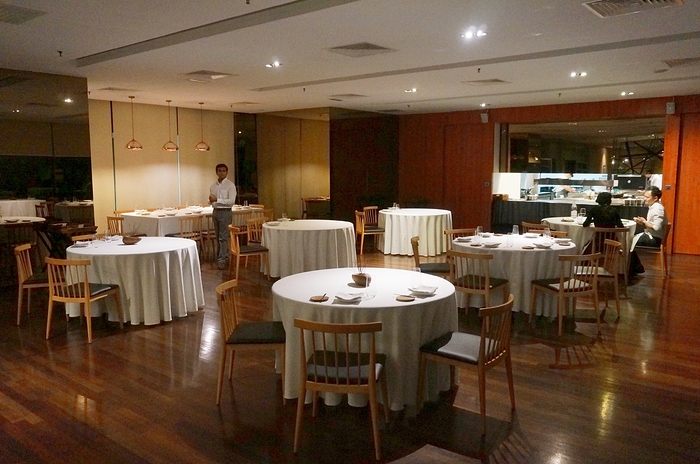 What sets Dewakan apart from other fine dining restaurants in Kuala Lumpur is its brave inclusion of some very Malaysian ingredients in its repertoire, for example, strong-smelling condiments like Terengganu “budu” (fermented fish sauce), assertive herbs like “temu kunci” (fingerroot or lesser galangal) and “ulam raja” (a leafy edible fern) - common items on dining tables in Malay villages, but usually never found in a fine dining restaurant. This place is like a “Noma-in-the-tropics”.

Baby Corn - These are grilled baby corn (reminiscent of those served by Michelin-starred Cheek by Jowl in Singapore and GAA in Bangkok), corn emulsion, crab cracker and garam marsala.

Mango Curry - a mild, creamy soup which was supposedly reminsicent of a curry made by a Malayalee friend of Chef Darren’s grandmother.

Savoury Cakes - deep-fried little globes - the batter was folded with a “serunding” (spiced, cooked mince) of mackerel, then filled with smoked roe emulsion and mulberry jam.

Roasted Eggplant with Buah Keluak & Candlenut Oil - oven-roasted eggplant brushed with buah keluak paste, with a green "stem"consisting of delicately-arranged tiny petai belalang pods. The “eggplant” is served with an earthy foam made from button mushroom stock and candlenut oil. 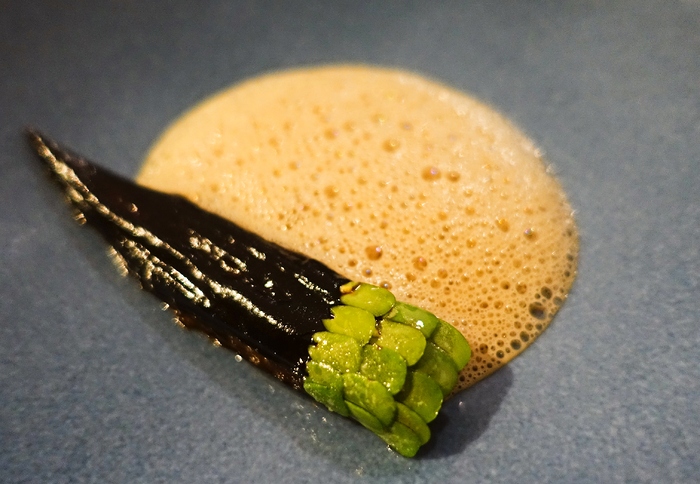 Slow-cooked Red Snapper with Broth made from Temu - this light fish broth was flavoured with “Temu Pauh”, a native root from the same family as ginger and galangal, but with a green mango flavour. 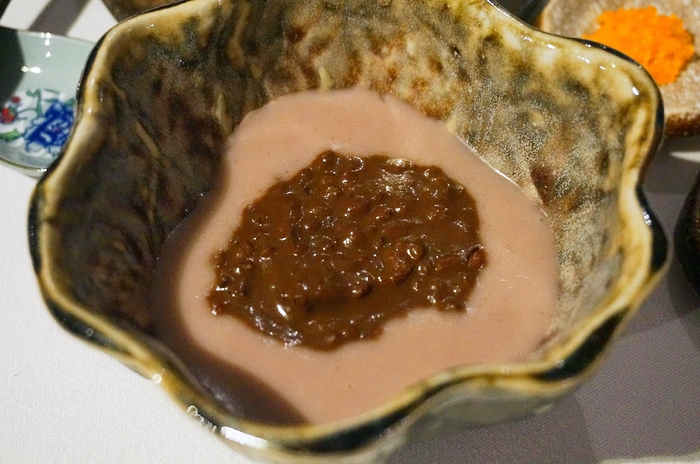 Kid Goat from Boden Farm, with Petai-So - grilled goat-meat (from a farm in the negihbouring state of Negeri Sembilan), brushed with a miso-“petai” paste, served alongside minced goat-meat with Chinese chives and lime juice. 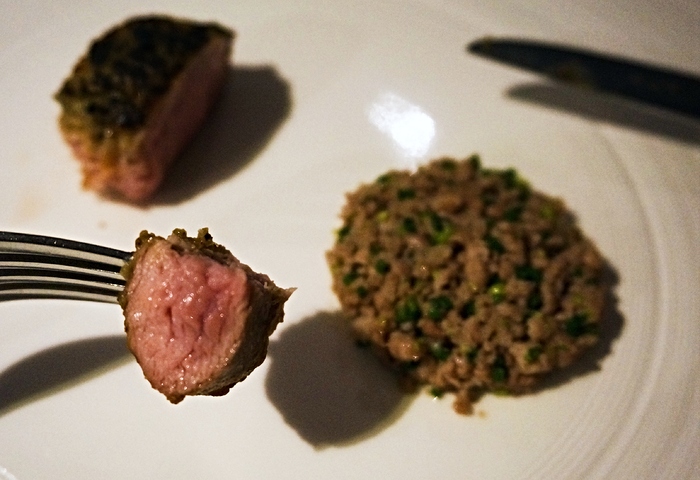 Tapai with Pickled Rose - “tapai” is usually a fermented rice wine, but we’re made to understand that the sourish-tasting version here is non-alcoholic to cater to Muslims.

Sweet Leaf Sorbet & Nam Nam - cubes of poached nam nam is served with sweet leaf sorbet and topped with a wafer made from dehydrated milk and dusted with roselle powder. 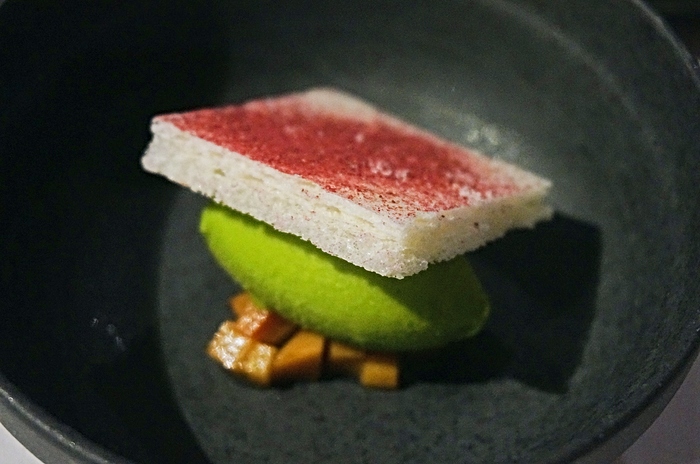 Temuan Chocolate with Jaggery Ice-cream - the chocolate is named after the Temuan aboriginal tribespeople who tended the cocoa trees which yielded the beans this chocolate is made from, served with a banana ganache and bee pupa. 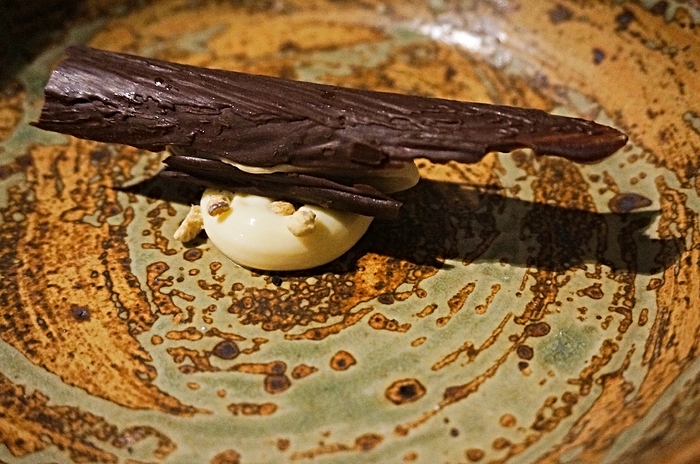 Popsicles - these are Chef Darren Teoh’s take on Malaysian “ais krim potong”, but with more elaborate flavours here - one with “ciku” & salted lime flavour, and one with banana & “ulam raja” flavour. 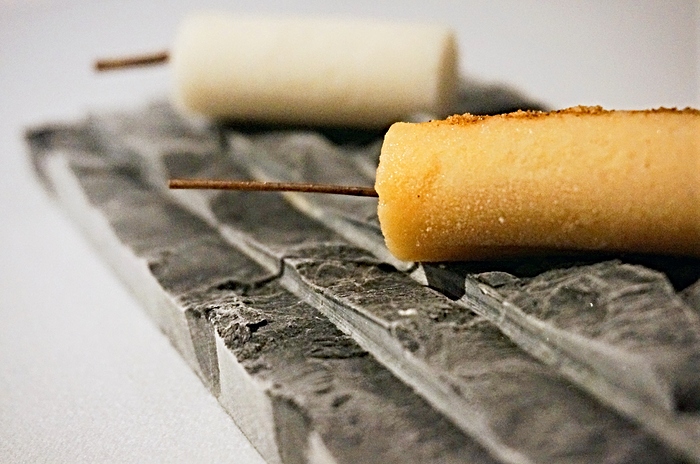 Overall, a rather rewarding “adventure” dining experience. The dining room is pretty open, so be prepared for noisy fellow diners, if any.

I can’t tell if you enjoyed the meal

I couldn’t decide - the food seemed inventive, and it delivered on taste more than the one we had at 1-Michelin-star GAA in Bangkok. But the noise coming from a table of 8-10 people next to ours was pretty distracting. I didn’t enjoy my dining experience there one bit - mainly from the din, even with Dewakan’s efficient wait-service and its kitchen which delivered the dishes like clockwork. I do wish Dewakan has private dining rooms to put big groups in.

It was also quite exhaustive to endure a 2-hour ride from KL city centre to Dewakan’s isolated campus setting outside the city.

Would I go back - maybe, only if Dewakan moves elsewhere.

Yeah Shah Alam is wayyyy out in the sticks. Does not pop up when I think of food. I have friends who live there and always insist we meet somewhere closer to civilization.

Trying to direct some locals to Dewakan for additional opinions.

I just re-read the ingredients, seems like there’s a lot going on the plate and resulting in potentially incongruous flavors. Curious if they’ve got it to work or it’s just a bloody mess for the sake of being Noma’esque.

For example:
I think this will have a nutty, earthy flavor punctuated by the slightly bitter pungent petai.
buah keluak + petai + foam made from button mushroom stock + candlenut oil.

This one OTH seems like it might be a mess:
taucheo+ kerdas+ fiddlehead ferns + pickled rose + smoked daikon.

For example:
I think this will have a nutty, earthy flavor punctuated by the slightly bitter pungent petai.
buah keluak + petai + foam made from button mushroom stock + candlenut oil.

This one OTH seems like it might be a mess:
taucheo+ kerdas+ fiddlehead ferns + pickled rose + smoked daikon.

The flavours were actually very much toned down - I think they go for “exotic” ingredients but made sure only small amounts of strong-smelling or -tasting ones were used.

I am so tired of this kind of cooking. It’s been played out since 2017. It’s amazing how long SEA has taken to realize how people don’t really want 4 hr meals with foam and cheap theatrics anymore–one course at a time. It feels so dated.

I feel the same way, too. We had the same at GAA in Bangkok earlier this year, and also the now-defunct Restaurant André in Singapore. One bite-sized courses and a meal that went on far longer than one would like.