Hua Xing by 73-year-old Madam Oh Fuu Yong is one of the few restaurants in mainly-Cantonese Kuala Lumpur that specializes in Fuzhou cuisine. Although Fuzhou (Population: 7.66 million) is the capital of Fujian Province, its dialect is virtually incomprehensible to the other Fujianese (Hokkiens, Min-nan) people. The Fuzhou people are often referred to as Foochow or Hockchiew, and their cuisine also differs markedly from those in other parts of Fujian. 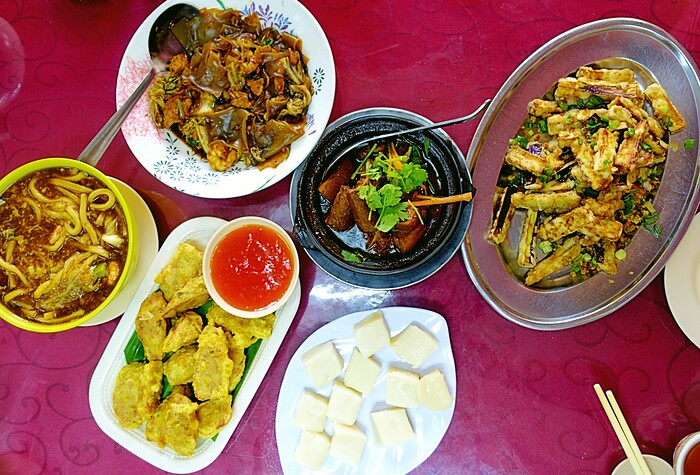 In Malaysia, there are 3 major urban centres with majority Fuzhou-Chinese populace: Sibu in Sarawak state, Yong Peng in Johore state, and Sitiawan in Perak state. So, it was a pleasant surprise for me to chance upon Hua Xing in Kuala Lumpur. Located in the outskirts of the city, in the middle of the Sungei Way industrial area, the spartanly-furnished eatery looked pretty inconspicuous. But the cooking was at another level altogether: punchy flavours, and where many of the dishes have this unctuous quality much loved by the Fuzhou people. 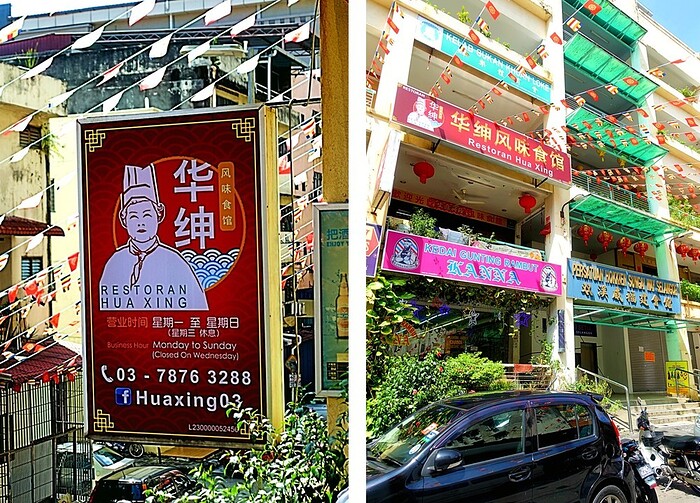 Our lunch consisted of:
Fuzhou spring rolls - this dish confused us a bit (my lunch partners were a Cantonese and a Hakka, so they weren’t much help in trying to explain the dish). I think in Penang or Singapore, where majority of the Chinese are Fujianese/Hokkien, we’d never call these spring rolls, but perhaps 5-spiced rolls (“ngoh hiang”) or “lor bak”. The meat rolls themselves were quite bland, so the little saucer of chili sauce helps. 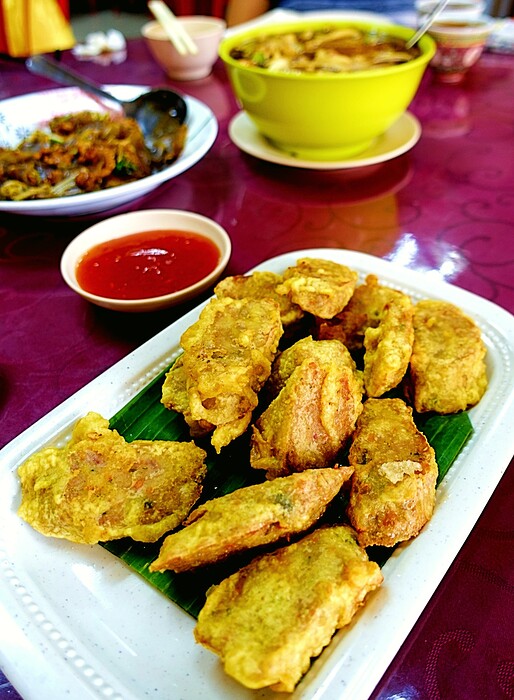 Lor Mee - this noodle dish is widespread in Fujian Province, not only in Fuzhou, but also in other major cities like Xiamen, Nan’an, Quanzhou or Zhangzhou. Basically thick yellow wheat noodles (also known overseas as Hokkien noodles) smothered with an unctuous sauce cooked with pork and shrimps, and flavored with 5-spice, oyster sauce, soy sauce and eggs. It’ll be served with raw, chopped garlic and dark vinegar to undercut the heaviness of the sauce. 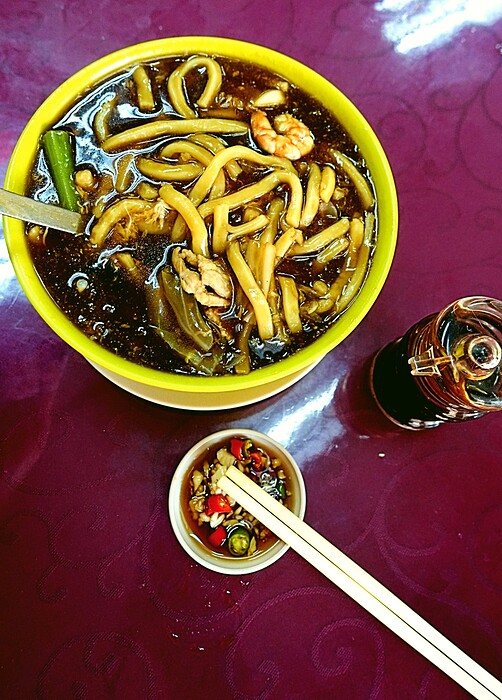 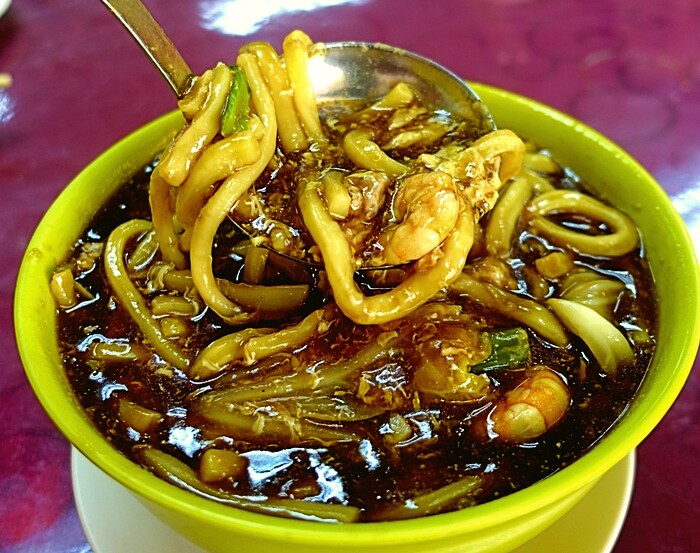 Shiang Shu Qie Zi (described on the menu as “pungent aubergine”) - the aubergine was cut into little batons, seasoned, floured and crisp-fried. Very addictive flavors and textures. I’d come back here just for it. 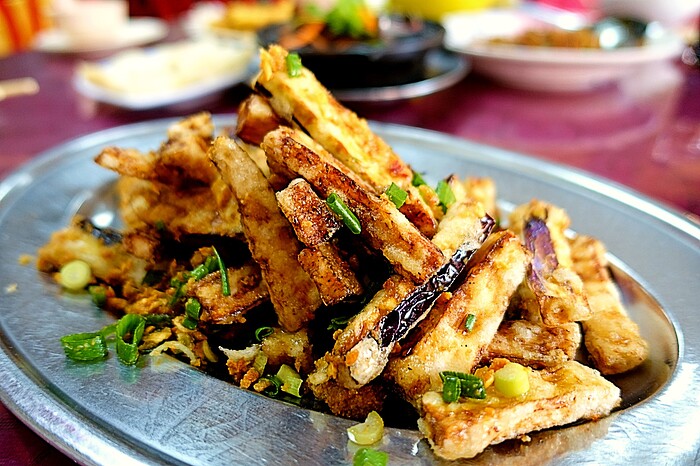 Feng Rou Jian Shui Gao (soy-braised pork) served with rice cakes - one of the house specialties. It’s a rather heavy, meaty dish - thick strips of pork belly cuts, slow-braised till meltingly-tender and where the meats have absorbed all the flavors of the braising sauce/marinade. It’s served with squares of alkaline rice cakes which have a stretchy, chewy texture. It’s quite a challenge to even pick up these wobbly, slippery squares with one’s chopsticks. The rice cakes’ blandness provide a perfect foil to the heavily-seasoned meat stew. 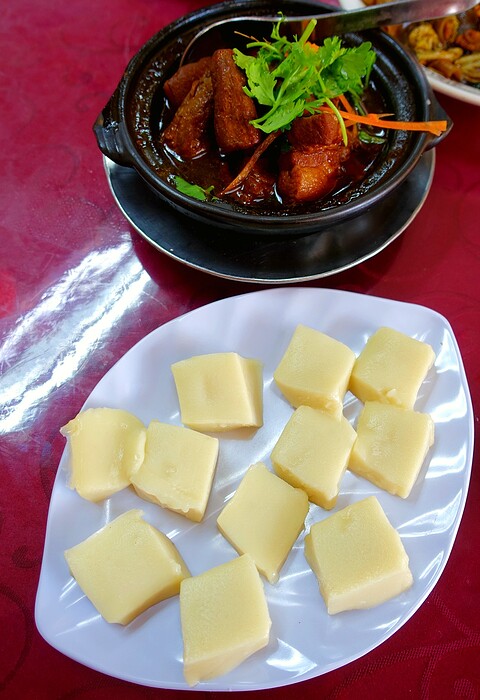 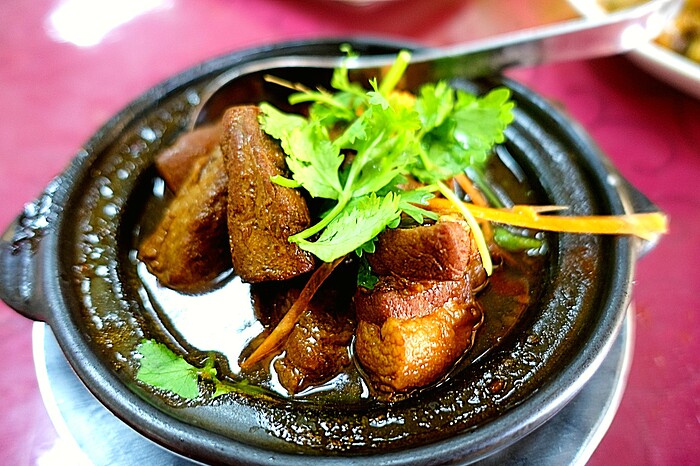 Braised Tapioca Flour Noodles - yet another slippery noodle dish: the flat tapioca noodles have a semi-transparent appearance, and quite stretchy as well. Braised with pork, shrimps and Chinese cabbage, I quite liked this noodle. 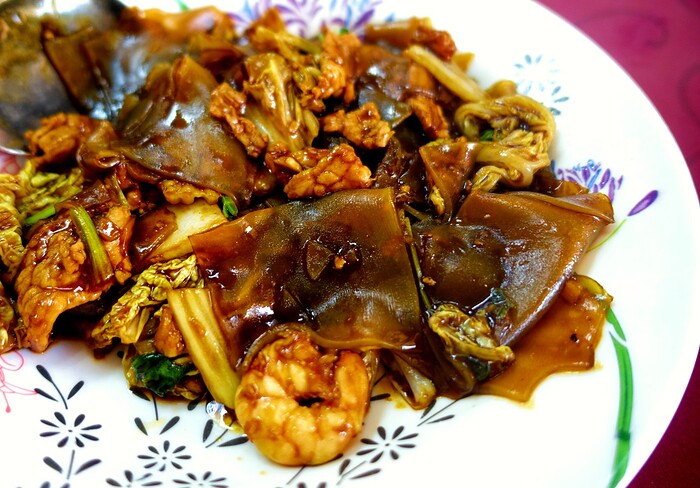 Always an exciting adventure to explore another Chinese regional food culture. The cuisines of China’s different provinces tend to differ markedly from one another, but it’s quite a surprise for me that even within the same province - Fujian, in this case - we encounter a totally alien food culture from our own.

The aubergine dish looks fanTAstic. Tapioca noodles (so wide I’d call them sheets) are interesting. The dish has a few things I like, too.

It’s quite amazing how adaptable the Chinese diaspora is. The Fujianese have been emigrating to South-east Asia since the 15th-century. 3 years ago, when I was one of the delegates to the 31st Baba-Nyonya Peranakan International Convention hosted by Indonesia, we were taken to visit Lasem in Central Java, which has a 700-year-old Chinatown! There, we saw hybrid Chinese-Javanese culture, lifestyle, language and even cuisine! Some of their food items, though indigenized, remained recognizable to us who are familiar with Fujianese cuisine.

The Chinese in Indonesia, whether from Java or Sumatera spoke Hokkien with a distinct Zhangzhou accent, similar to the Penang-Hokkiens, and different from the Quanzhou accent prevalent in Singapore and most of Malaysia to the south of Penang. So, a Penangite can go to Medan or Jakarta in Indonesia, speak Hokkien and be mistaken for a local, but can be picked out as a foreigner in an instant the moment he/she utter a single syllable in Singapore. Likewise, when I first moved to Penang in 2017, locals (cab drivers or street hawkers) would pick up on my Singapore-Hokkien accent (despite my attempts to mask it) and sometimes even asked if I have Xiamen (Amoy) forefathers!

In Indonesia, Malaysia and Singapore, I’d say the most obvious adaptations to Fujianese cuisine are the use of chilis and local spices and herbs.

In Jakarta, we were also brought to the Rumah Boeroeng Museum Kuliner, a culinary museum in Tangerang Chinatown district. Some of the local Chinese food items served to us: 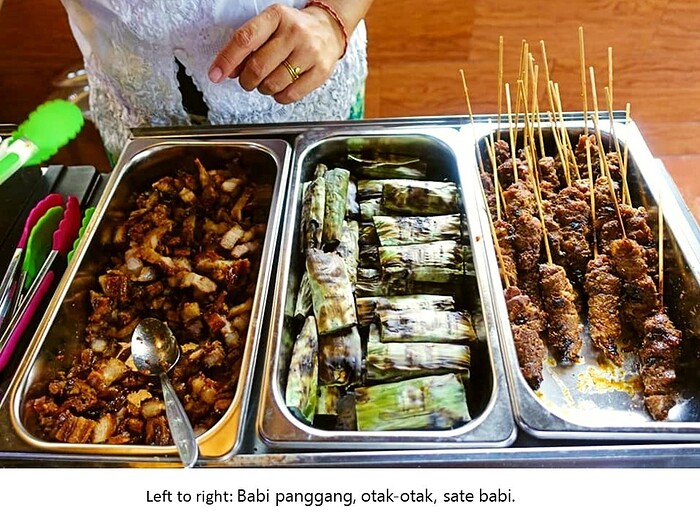 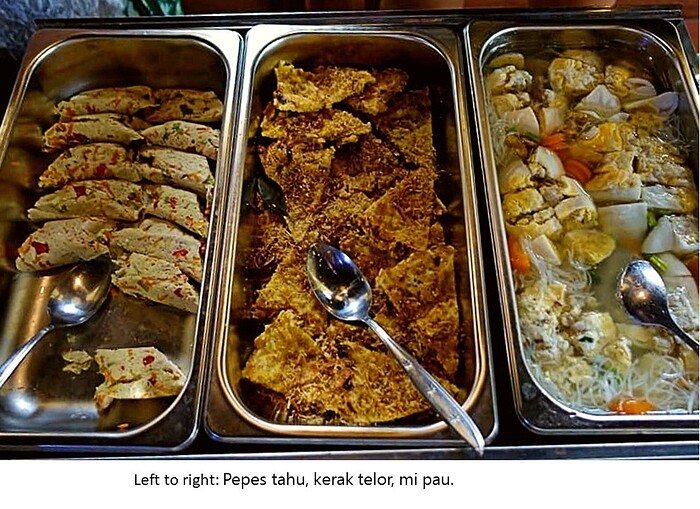 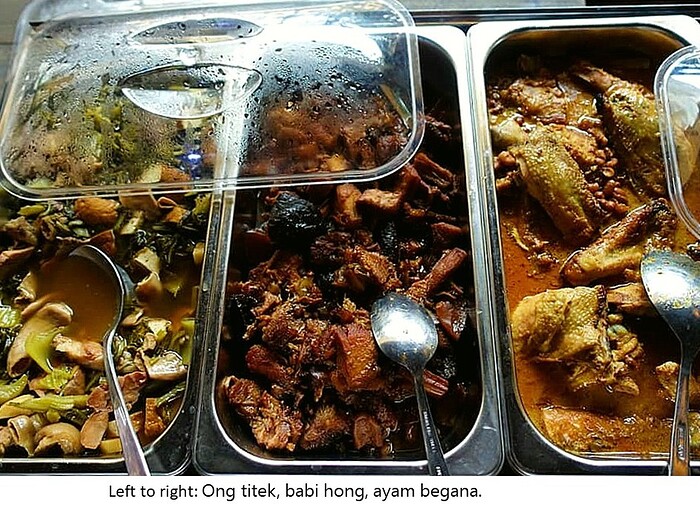 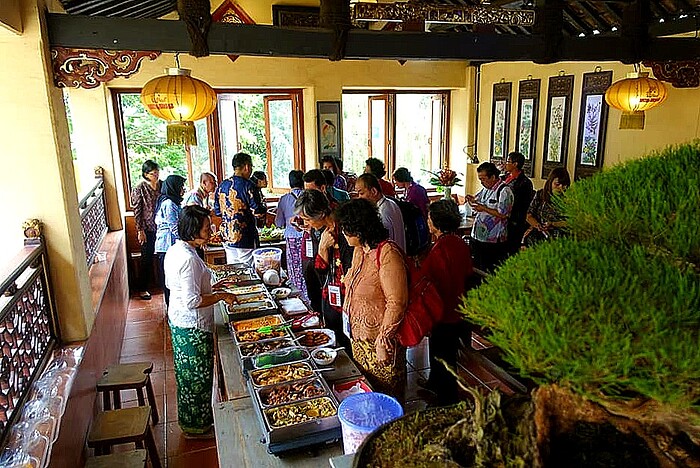 It was the first time I encountered all these dishes, but at one taste, I can detect familiar flavours - some even transported me back to the cooking from the olden-days in Singapore or Malaysia. Seems like whilst we in Singapore have lost the use of some of the spices and herbs, the Indonesian-Chinese have retained them.

Really fascinating. It’s no wonder the Chinese succeed almost everywhere. Being able to adapt and in many cases, getting on the the language(s), are both the key to a successful future in a new country.

Whilst doing research for my Okinawa trip I learnt that most people on the boats to Brazil were Okinawans. They were forbidden to practice their languages and culture under Japanese rule and saw the opportunity to leave for a new land and took it. Nowadays young Okinawans go to Brazil to learn about their culture and languages. It’s where the old Okinawan ways have been preserved by the migrants.

Okinawa prefecture remains the “poorest” (least prosperous) in all of Japan.

Whilst doing research for my Okinawa trip I learnt that most people on the boats to Brazil were Okinawans. They were forbidden to practice their languages and culture under Japanese rule and saw the opportunity to leave for a new land and took it.

Okinawa, as part of the Ryuku archipelago, has had contacts with the Fujian people since the beginning of the Ming Dynasty: 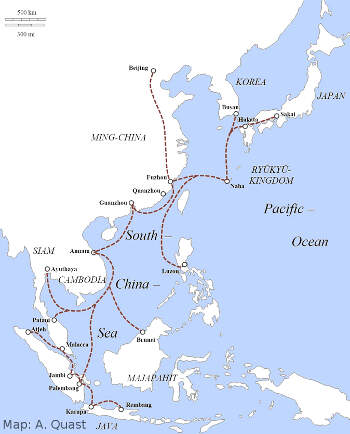 The 36 Clans of the Min-People

Shortly after the establishment of tributary trade relations with China, a group of Chinese from Fujian were granted to Ryūkyū by the Chinese Emperor and started to immigrate to Okinawa in 1392."Continue reading..."

And of course these historical contacts with different tribes and people in the region have all contributed to their cuisine.

We love it there. Can’t wait to go back.

Loh/Lor Mee is a Fujian dish?

I had it for brekkie yesterday, at the hawker center next to One Corner cafe. There was a line. It was decent. Dark rich sauce with a bit of vinegar.

Loh/Lor Mee is a Fujian dish?

Yes, it is. Traditionally, in Fujian, they’ll serve lor mee to early guests who are waiting for the proper wedding dinner banquet to start. The guests would also be served deep-fried 5-spice meat rolls.

Oftentimes, the diners would dip the hot, freshly deep-fried meat rolls into the lor mee’s gravy to “cool” the meat rolls down before eating. Eventually, that evolved into the method of eating meat rolls, and people started asking for the lor mee gravy (which is unctuous, sticky and complements the meat rolls) outside to go with their meat rolls. That was the origin of the “lor” dipping sauce which is always served with the 5-spice meat rolls in Penang, together with a red chili dipping sauce.

Fujianese everywhere would refer to the meat rolls as “ngoh hiang bak” (the Fujianese pronunciation of “wu xiang rou juan”/ 五香肉卷), but in Penang, it’s called “lor bak”: “lor” referring to the brown dipping sauce, “bak” being the Hokkien word for meat. 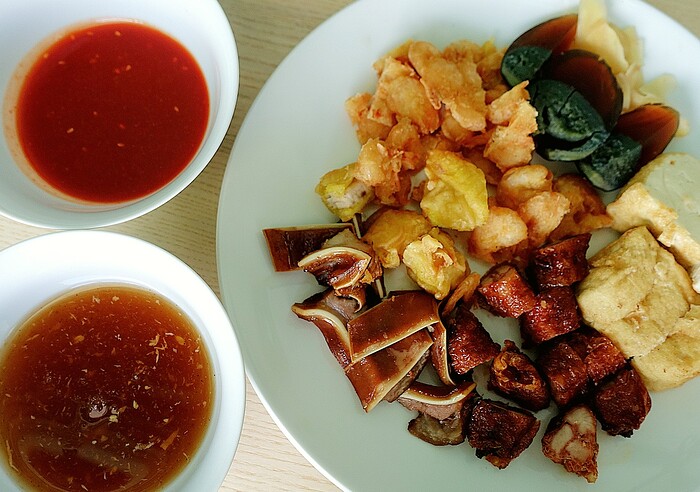 I had it for brekkie yesterday, at the hawker center next to One Corner cafe. There was a line. It was decent. Dark rich sauce with a bit of vinegar.

The “lor mee” guy took it as an affront to him by the other stallholders, and he decided to move out, and Seong Huat Cafe, being just a couple of minutes’ walk away, was the logical choice.

Your depth of knowledge on the stories behind the food here never ceases to amaze me!

Was just in Pulau Tikus this morning. Lots of goodies out!