Kristang cuisine, which encompasses Portuguese, Dutch and British influences, is a distinct regional cuisine by itself in Singapore and Malaysia. Its long history stretched back to the 16th-century, when Portuguese conquistadors overthrew the Sultanate of Malacca and settled there, creating a Creole Portuguese community. Malacca was a Portuguese colony from the time of its conquest in 1511 until 1641, when the Dutch East Indies Company’s fleet defeated the Portuguese armada and ransacked the Portuguese’s Fortaleza de Malaca. The Dutch subsequently stayed for nearly two centuries before the British took over Malacca in 1821, to become part of its British Malaya domain. Consequently, one finds Eurasians with surnames like Da Costa, Sequeira, Carvalho, Santa Maria, Pereira, alongside van Huizen and Oosterhuis, all a testimony to Malacca’s long, colourful history. During the British’s more than two centuries of colonial rule over Malaya, the Eurasians spread from Malacca to Penang in the north and Singapore in the south, as the 3 states make up the British Straits Settlements.

The Portuguese-Eurasian community is most distinct in Malacca, and its popular cuisine has well-known dishes like Curry Debal, Beef Smore, Feng, Pang Susi and many more, which has become an indelible part of the Singaporean/Malaysian culinary landscape.

Melba Nunis (we all called her “Auntie Melba”) was a Malaccan-born former restaurateur - she ran Simply Mel’s in Kuala Lumpur from 2011 to 2016, before shuttering it to move to Malacca and headed the Mansion at the Majestic Hotel there for two years. These days, Auntie Melba has chosen the quieter life and runs a supper club (which she calls Dine with Mel) at her home in Kuala Lumpur. She’d also written the Kristang Family Cookbook which listed down all the Portuguese-Eurasian dishes in her repertoire. Auntie Melba’s essentially Kuala Lumpur’s answer to Singapore’s Mary Gomes (author of The Eurasian Cookbook, and who runs Mary’s Kafe).

A foodie friend organised a group of us to try out Melba Nunis’ supper club last Thursday. Auntie Melba cooks for a minimum of 6 persons, but we managed to muster a party of 10 (she caps her supper club party size at 12).

66-year-old Auntie Melba was a “hostess with the mostest” tour de force - in-between dishing out her home-cooked fare, she filled us in with anecdotes, origins of the dishes we had, cooking secrets, etc. Her newly-minted supper club joins a handful of others in Kuala Lumpur, catering to those of us who are tired of run-of-the-mill KL eateries. Whilst Auntie Melba has set menus for us to select from, she was also open to tailoring the menu with any particular dish we’d want to have. What we had that evening - all the food were served on communal platters: 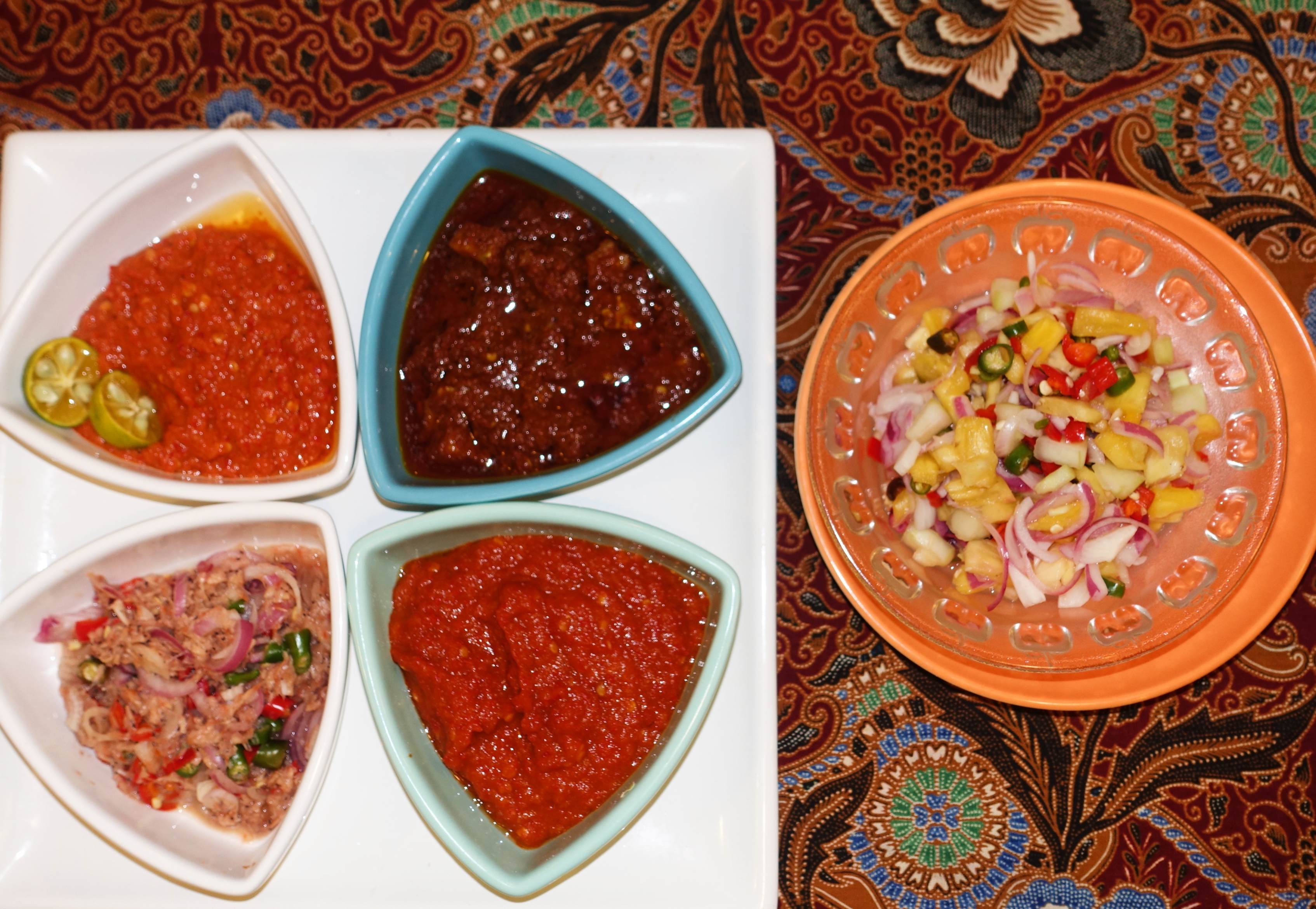 MAINS
3) Bacon bone Kari Debal (Devil Curry) - “Debal” is a Kristang-Creole word meaning ‘leftovers’ as this ultra-spicy stew was cooked utilising Christmas roast leftovers in the olden days, with lots of chilis and vinegar thrown in - perhaps to also act as preservatives for the dish during pre-refrigeration times. In time, Kari Debal became the signature dish of Kristang/Eurasian cuisine, and its trademark chili-spiciness (plus some inadvertent mispronunciation early on) earned it the moniker Devil Curry, as it’s “hot as Hell”.

Devil Curry is usually cooked using chicken or pork-ribs (sometimes both), with frankfurters and potatoes thrown in. I know Singapore’s Kristang/Eurasian restaurants liked to add cabbage to the stew - but it’s probably a regional variance as Malaccan Kristang/Eurasians don’t. The version we had at Auntie Melba’s used bacon bones, which added a smokey, sweet quality to the stew, tempering its spiciness a bit. 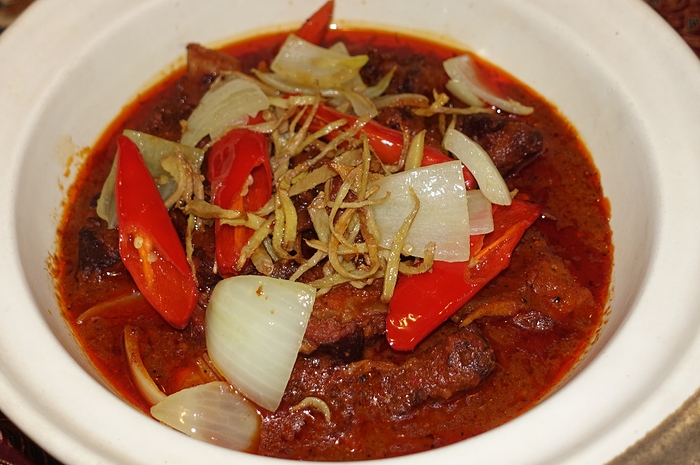 DESSERTS
9) Sago biji Gula Melaka - this home-made rendition was absolutely much better than the ones we get outside which usually used canned or powdered coconut milk. Here, the freshest coconut milk was used, and the Gula Melaka was also of the best quality, with a distinctive smokey richness and depth in flavour. 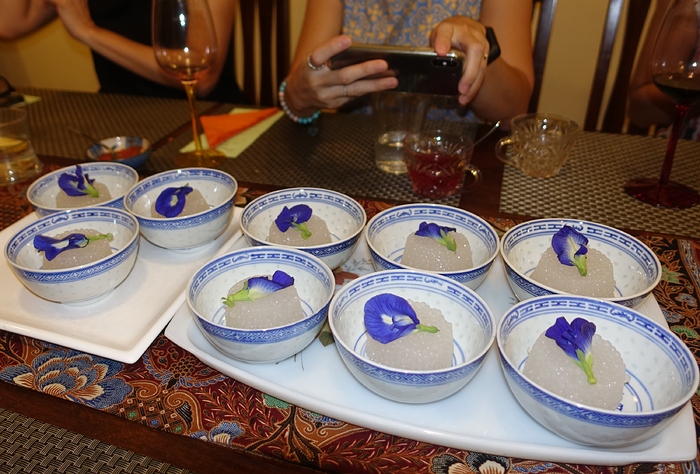 Auntie Melba’s supper club gave us the home-cooked flavours which we couldn’t find in commercialised Eurasian restaurants outside, even at her now-defunct Simply Mel’s at Bangsar South. Here, the spice blends were all made from scratch, the freshest coconut milk and good quality Gula Melaka were used. 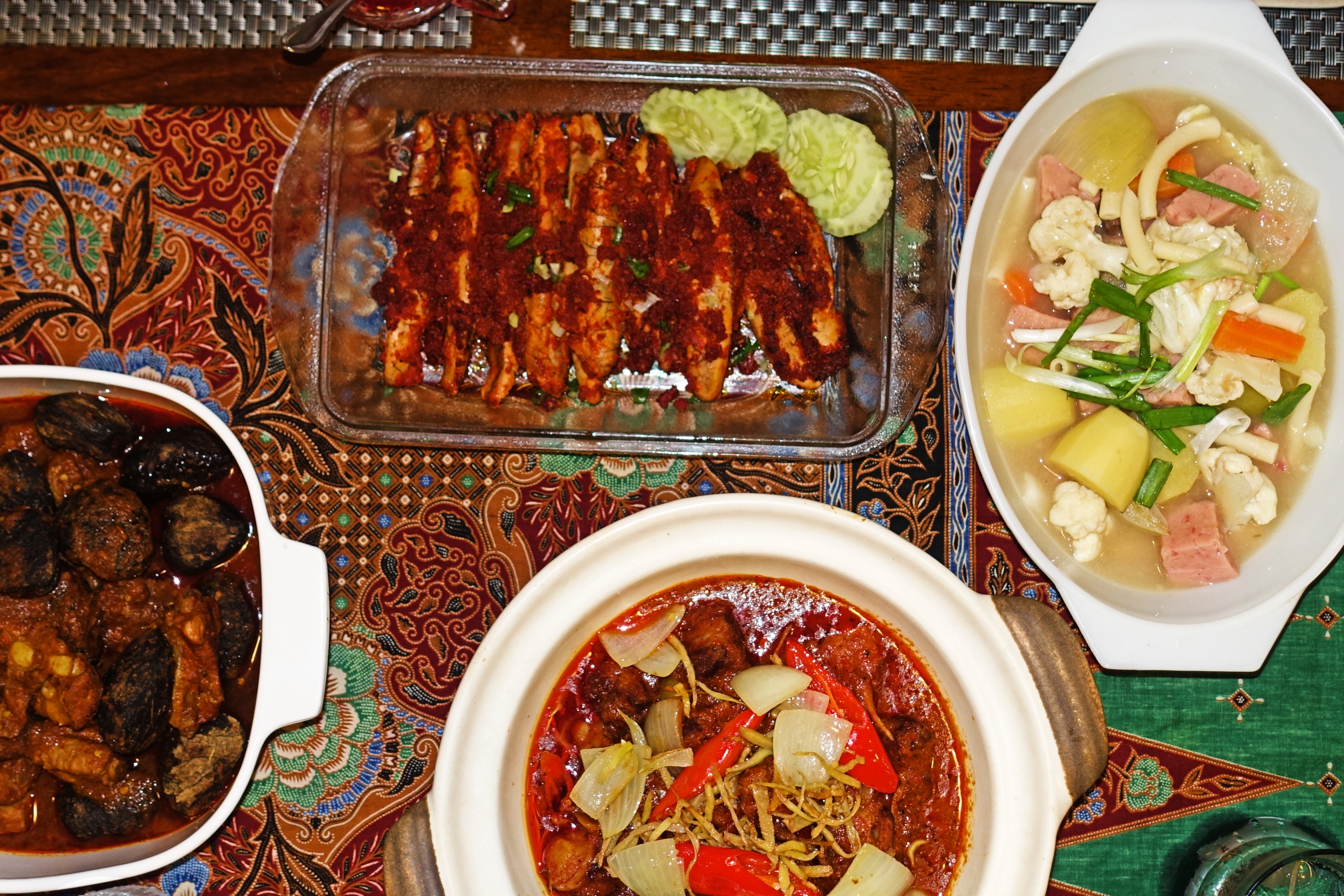 Auntie Melba provided us with a refreshing jelly rose selasih drink that combined rose syrup with basil seeds, and which reminded me somewhat of the Katong jelly drink served by Casa Bom Vento, a Kristang/Eurasian restaurant in Singapore back in the 90s. We discovered that adding a splash of gin into this drink actually improved it quite a bit. 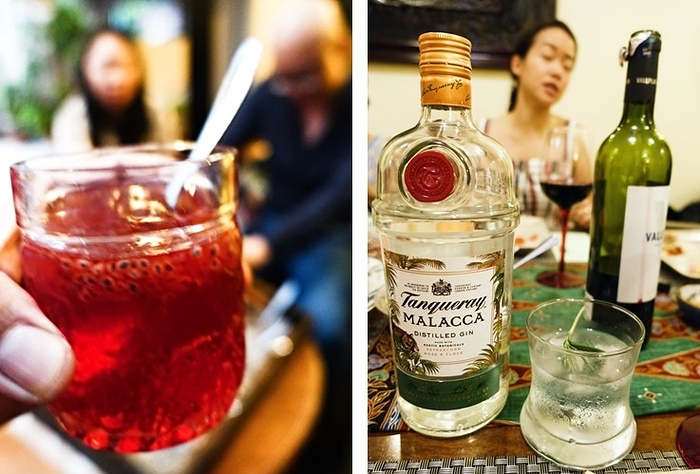 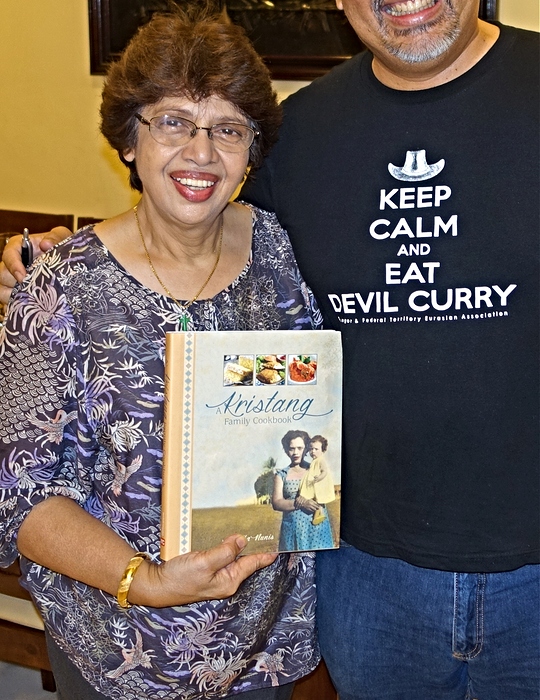 Eurasians themselves are the most vociferous critics of Eurasian restaurants - very much attributable to the fact that each Eurasian family will have their own variation on a certain dish (very much like us Baba-Nyonyas). Consequently, a Eurasian eating in a restaurant might bemoan that the dish was “not as good as what my mom cooked”. This general attitude among Eurasians had actually led to the demise of a good number of Eurasian restaurants in Singapore in the past 20-30 years: Casa Bom Vento (when the legendary late Eurasian chef Robin Pereira was cooking in its original East Coast Road location, not the Joo Chiat Road incarnation), Kristang on Orchard Road, Sandrina’s Kitchen at Lagoon Food Centre, Sylvia’s Delight in Serangoon Gardens and The Eurasian Settlement in Katong. The standard bearers for Eurasian cuisine in Singapore today are Mary’s Kafe by Mary Gomes, Folklore by Damian D’Silva and Quentin’s at the Eurasian Community House by Quentin Pereira, the son of the late Robin Pereira.

In Malaysia, one very good Eurasian restaurant can be found in Kuala Lumpur: Kumi by Malaccan-born cousins Rueben Moissinac and Amos Stevenson. Malacca, on the other hand, has a cluster of Portuguese-Eurasian food-stalls at the very touristy Portuguese Square, in the middle of its Portuguese Settlement. These food stalls concentrate very much on seafood and standards can be pretty erratic.

I’ve only done a supper club once but it was a fascinating experience. Home cooked Punjabi food - so different from restaurant food.

so different from restaurant food.

Supper clubs normally have food with more home-cooked flavours, possible as they are cooked in smaller portions.

For visitors to Penang, there’ll be a Eurasian Food Fiesta coming up on Saturday, Aug 17. It’s held at a local high school - Saint Xavier’s Institution, and the pop-up stalls are all run by amateur Eurasian cooks, so one really gets to taste home-cooked Eurasian flavours!
It’s held as part of the centenary celebrations of the Penang Eurasian Association. 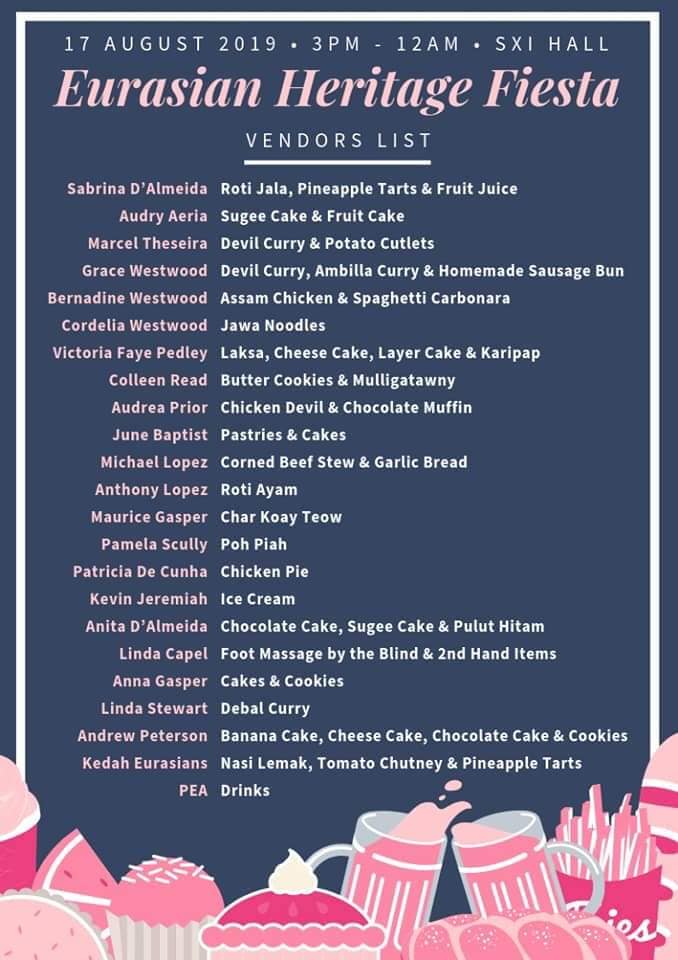 Chilli garam fried fish roe - this was a sinfully delicious dish, with the spicy-garlicky chili garam a perfect foil for the fishy pan-fried roe. 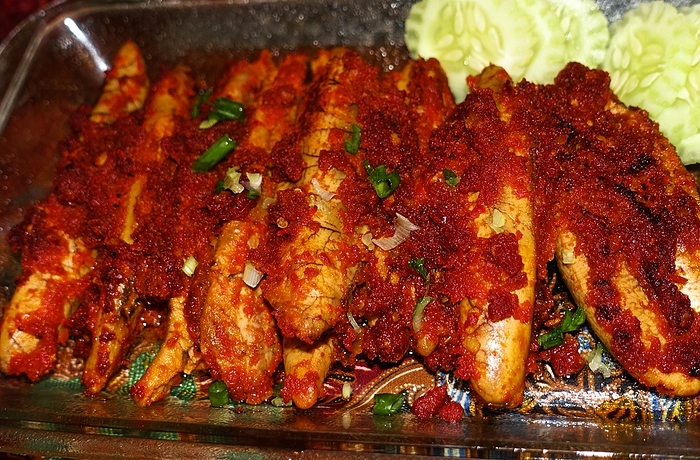 As a big fan of roe I would love to eat this. What’s in the chilli paste besides onions and chillies? I’m tempted to add crispy chilli and dried shrimp.

I made a chilli paste for crabs last week with the following ingredients: long green and red chillies, ginger, garlic and tiny salted shrimp (the kind that looks white and shell is intact). This is the basic paste. For something like crabs I also add pounded fresh turmeric (sometimes belacan) to the basic paste. Some fish sauce and a pinch of sugar to taste. It was very good with crabs.

I ate this in in Okinawa. It’s simpler, just raw roe, salt and chillies. This big advert is the first thing you see when exiting the airport. I had no idea what it was then at the supermarket a couple of hours later I knew straight away. 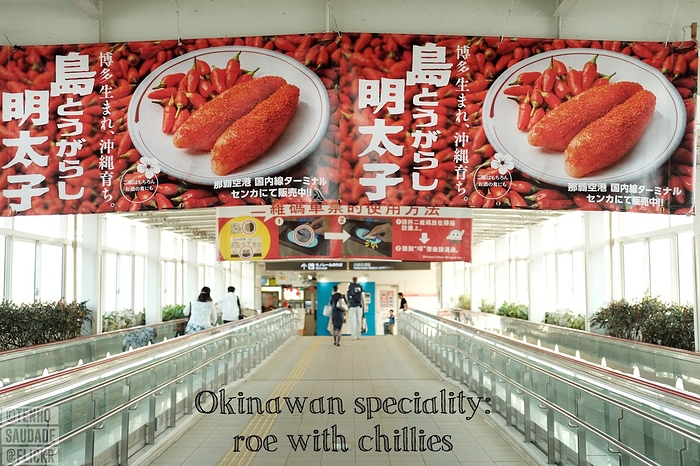 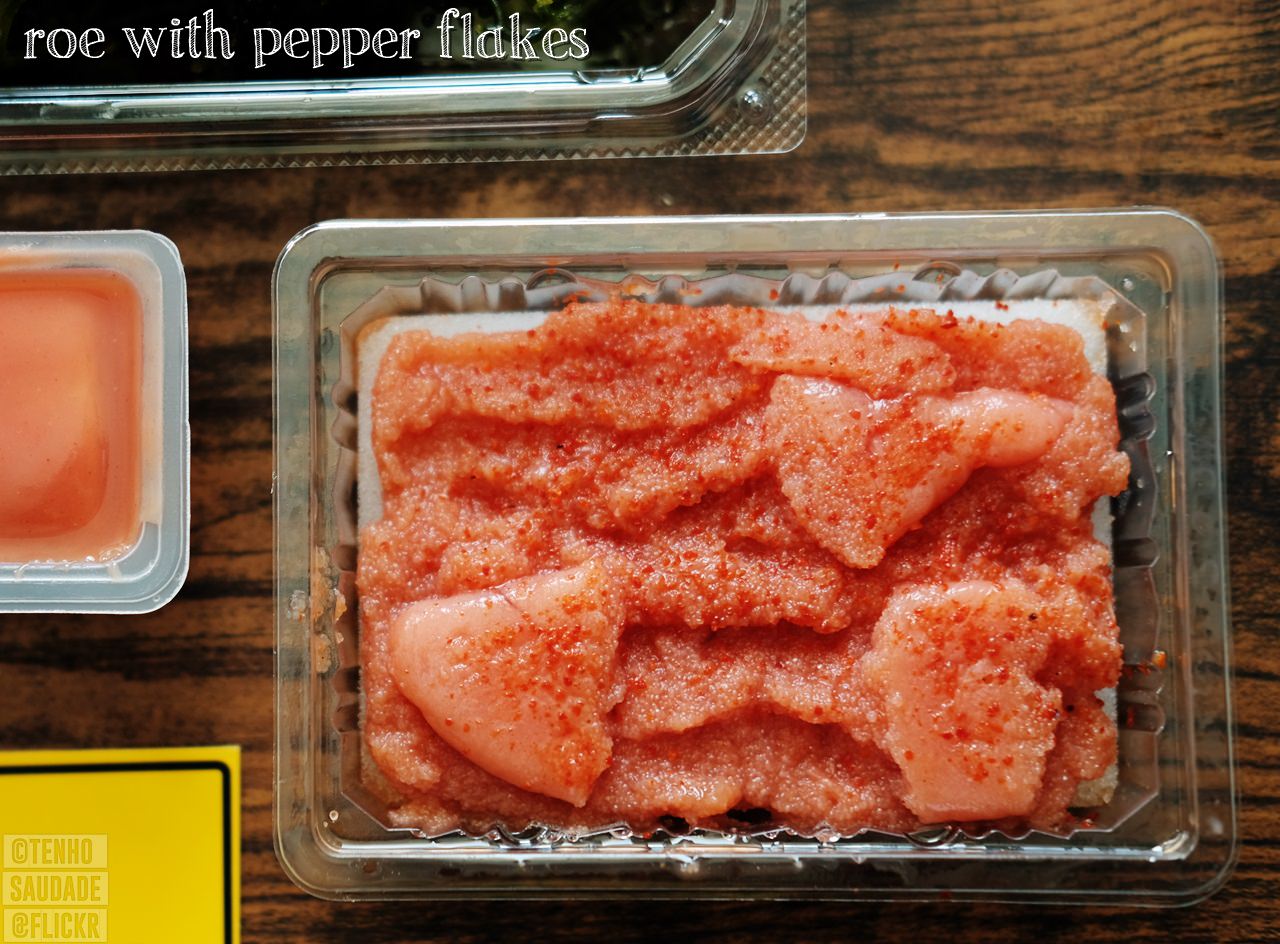 What’s in the chilli paste besides onions and chillies?

Only 3 basic ingredients for the sambal rempah spice paste:
dried chilis (softened/rehyrated in water), shallots/small onions and candlenuts (macadamia can be used as a substitute).

I ate this in in Okinawa. It’s simpler, just raw roe, salt and chillies.

I’d sure like to try that! Am scheduled to be in Okinawa next April 2020.

Thanks! I shall give the paste a go.

Btw, I’ve seen Melba and her restaurant in some food show.

Thanks! I shall give the paste a go.

Drain the softened dried chilis, then place in a food processor with the shallots, candlebuts and water, Blend.
Heat oil, then cook the paste over low heat until fragrant (about 10 minutes). Remove from heat and drain excess oil.

Paste can be used immediately, or else kept refrigerated for up to 2 days. Frozen paste can keep for months.

Thanks for this! I forgot to get macadamia nuts yesterday. I have Sichuan heaven-facing chillies so I’ll use them.

This is the paste I mentioned in a previous reply. I also use it as a base for noodle soup, with fresh turmeric and more seasoning added. 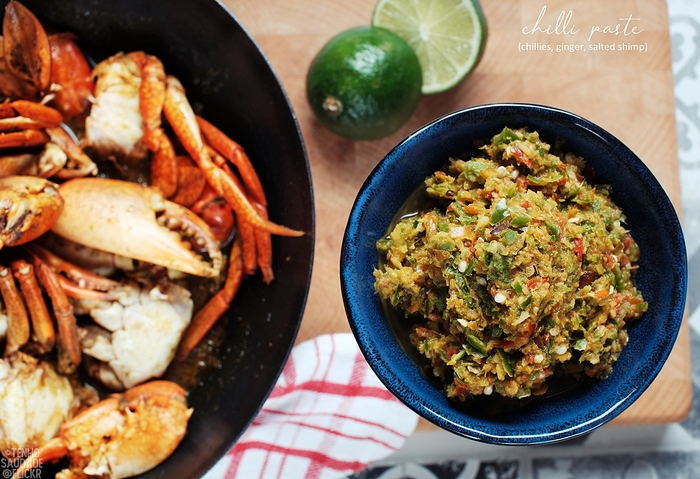 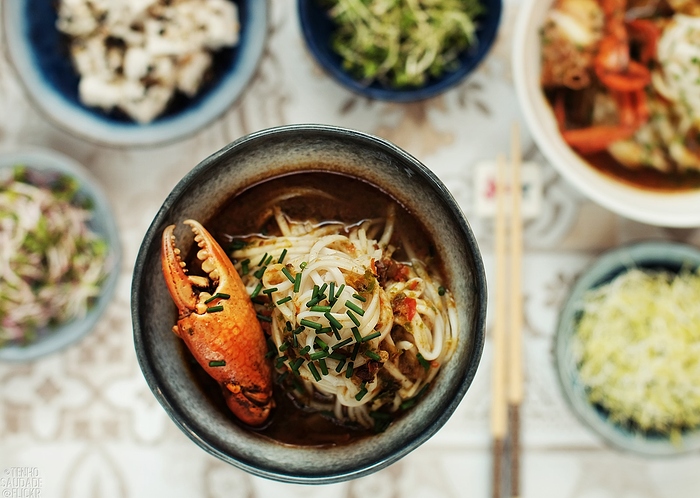 Madagascan chilli crabs a la moi. The shell is soft enough that not much strength is needed to crack it open. 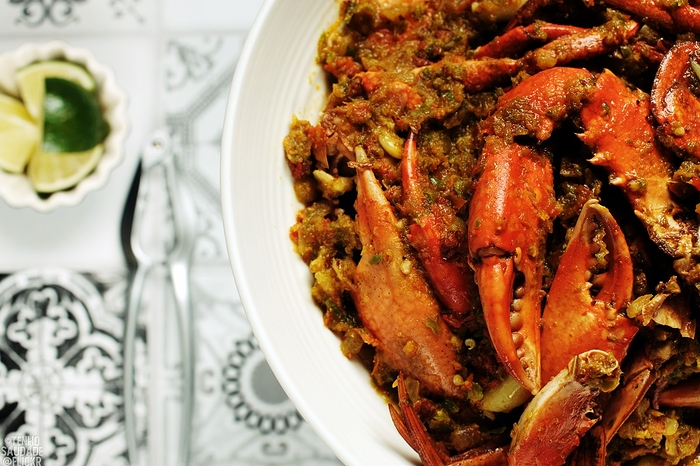 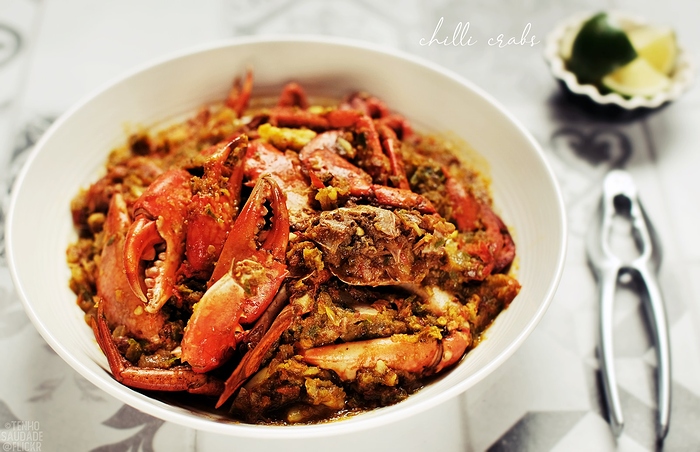