I had not realized the fried chicken breast sandwich was a thang. I totally missed this article in the Chronicle back in Jan, only coming across it today as I was looking for the Press article I had seen in March.

By the time the Press had published, I had already discovered Krisp and jumped on a bandwagon I didn’t know existed. 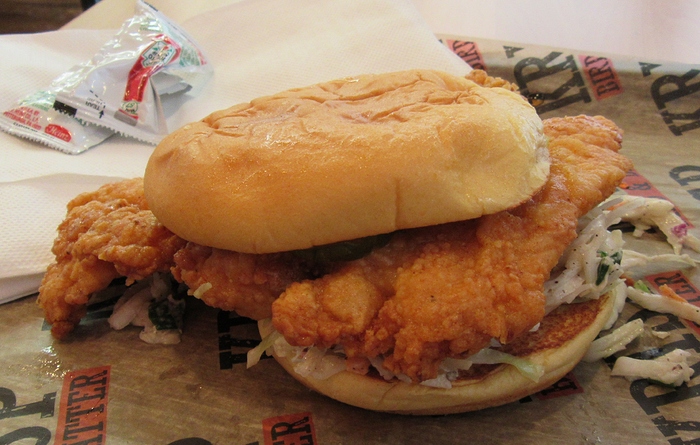 I tried the Krisp Classic first - cider slaw, pickles (house-made???), barrel-aged maple syrup and Crystal hot sauce. Note the breast has not been trimmed to fit the bun. I dug into the portion outside the bun first and was in awe. Very, very juicy and flavorful, like you almost never come across. I loved the sweetness and the pickles, couldn’t taste any hot sauce (Crystal isn’t very hot) and thought the slaw was unnecessary. I generally prefer vinegary over creamy slaw but this one did nothing for me. 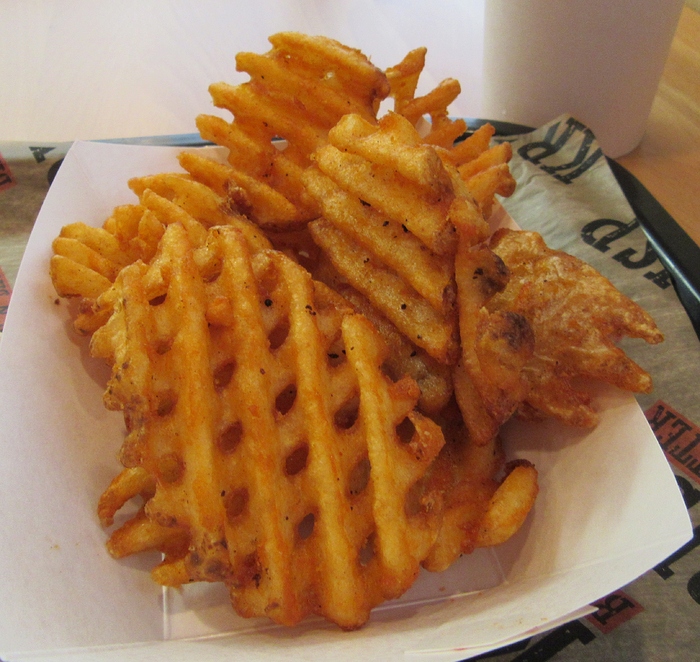 I ordered tater tots and got waffle fries. These looked so good I didn’t protest and was glad I didn’t. Usually waffle fries seem like a gimmicky menu item to me, too thin and insubstantial, but there were excellent. I’ll order them over the tater tots again. 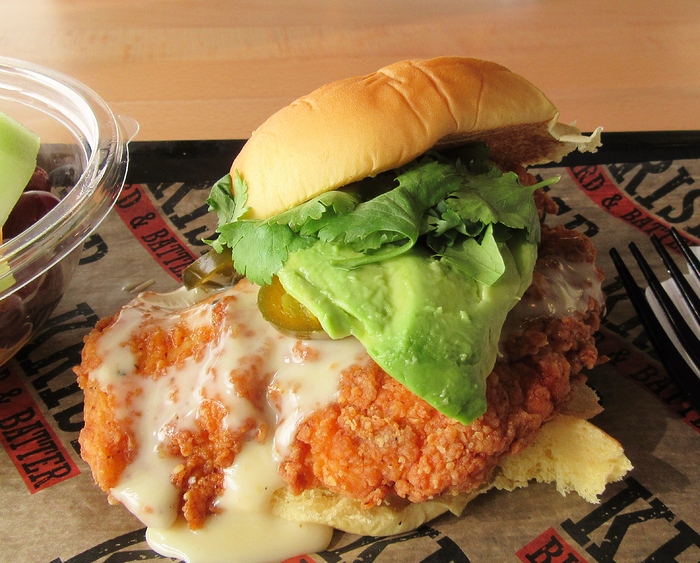 Three days later I needed a fix. This is the Southwest - according to the menu, queso, cilantro, avocado and jalapenos. I don’t ever do much staging of food for pictures other than turning the plate around but I hate this picture – I wish I’d done something about that big blob of greenery (biggest pieces of cilantro I’ve ever seen

). Note the breast is smaller; as one reviewer has remarked this is going to happen here. This breast was not as juicy and tender; I judged it was a little over-cooked vs. the first sandwich, but this was a superior sandwich because queso. The jalapenos added mainly flavor, not heat, and my only gripe about this sandwich was that the queso was only drizzled artisanally over the meat and didn’t completely cover it. Because queso. 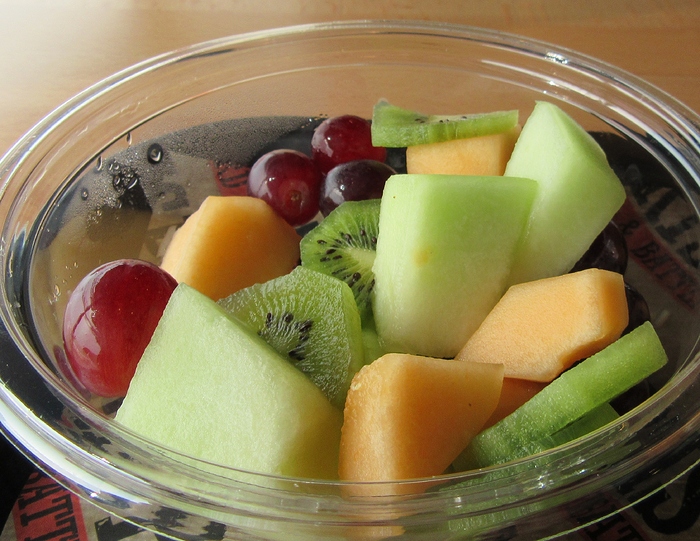 I tried the fruit salad for a side this time, trying to eat a little healthy. Getting a fruit salad in a fast food resto probably yields you about a third of a cup but the bowl this was served in easily could have held 8 oz of fluid and maybe 10. Except for the insipid kiwis, the fruit was all very flavorful and fresh.

I ordered coffee this time. They serve Boomtown coffee from the highly regarded small roastery in the Heights. It was the middle of the afternoon and there was none ready but they made some for me - I saw them weigh the beans and grind them, then brew them straight into a press pot. I got a 16 oz cup of fresh hot coffee, very, very good. My first taste of any Boomtown brew and I was impressed with the preparation and the taste. I don’t know what variety it was. 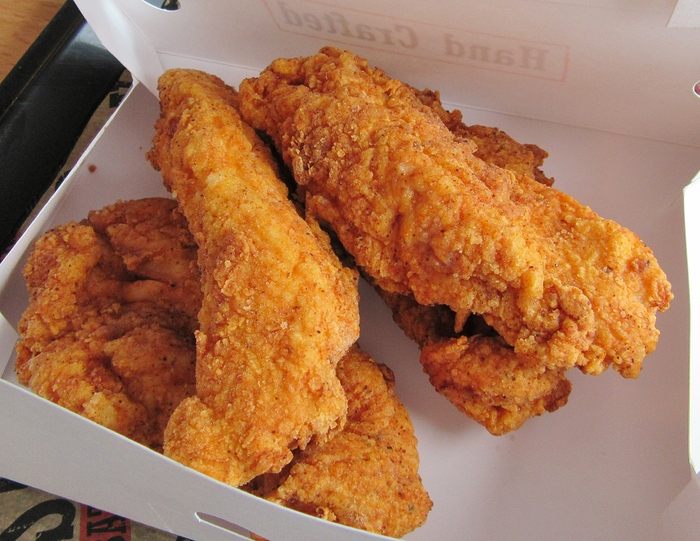 It had occurred to me the best way to experience this bird would be sans bun so I ordered the Tenders the next time (I managed to hold out for more than 2 weeks before wanting a fix). There’s a variety of sauces to choose from listed on a card at the register (no queso, unfortunately). 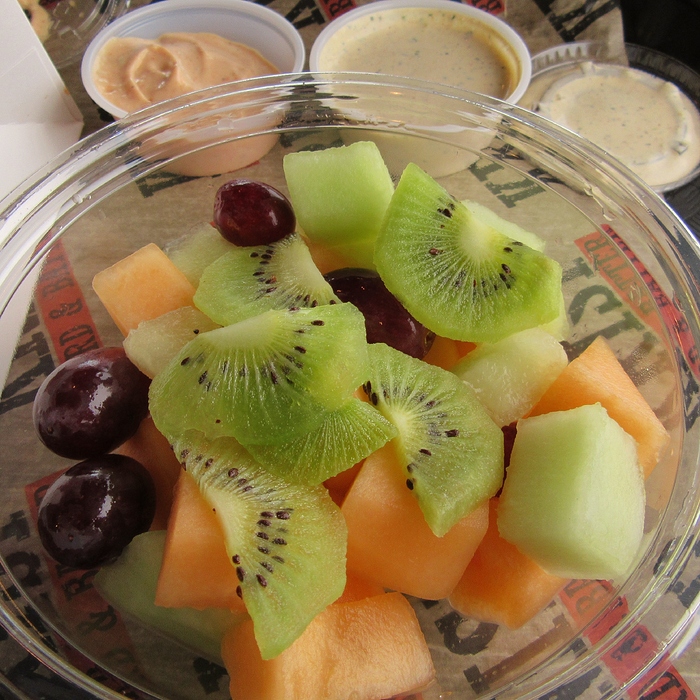 I got the fruit salad again (more insipid kiwis) but I posted this picture to show the sauces - the Come Back sauce on the left which one reviewer says is a blend of Remoulade and Russian, and Charred Jalapeno Ranch on the right. Both good but honestly I ate most of the chicken without dipping it.

The chicken is incredible. It’s sourced from Crystal Ranch Farms in Indiana and the chef/proprietor refers to it as the Waygu beef of chicken. I think I’ve read it’s buttermilk brined and pressure fried but there has been so much published about this place I can’t find where I read that. Buns are from Kraftsman in the Heights.

There was a lot of pre-opening publicity about this place and I didn’t pay much attention to it until I looked at a map and saw where it is. Not in the Heights or Montrose or on Washington Avenue or in the Village or the new ‘River Oaks District,’ but on what used to be called the Richmond Strip in the Clutch City days and dang close to me (well, relatively speaking) at the corner of Richmond and Fountainview. I get so few really good places out this way I had to check this one out and I highly recommend it. The owner says his goal is to do for the fried chicken breast sandwich what Shake Shack has done for the burger. Since I haven’t been to Shake Shack I can’t comment on that. A second location is already in the works in the Heights and I think I remember reading he not only wants to have multiple Houston locations but already has his sights on other cities. 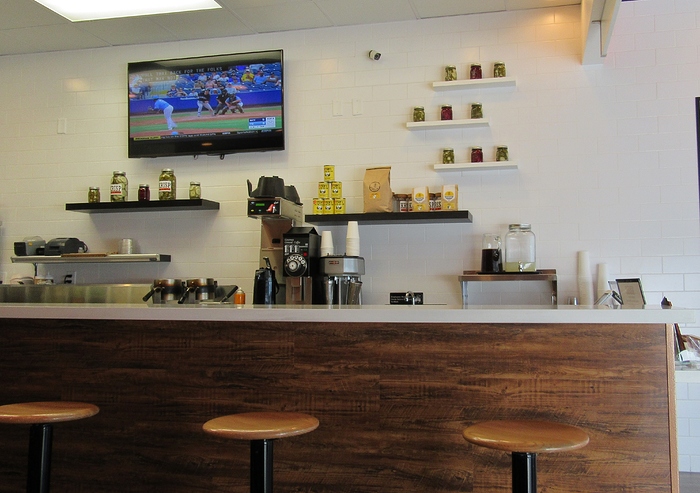 A view of the interior - cans of Steen’s, bags of Boomtown Coffee (the big bag was what my beans came from), pickle jars bearing Krisp labels (the only ones I could make out were bread and butter); the card listing the sauces offered is beside the ordering station at the end of the counter on the right, facing the windows. I don’t know if the pickles and smaller bags of coffee are for sale or what.

You get a choice of spicy or mild chicken and white or whole wheat bun (or waffle). I was not asked any time which I wanted but remembered on my last visit to ask for spicy. It’s not terribly spicy. Sides are $3.95, drinks are $1.95, but add both to make a ‘meal deal’ and it’s only $3.50 so it’s the way to go.

That’s a pretty minimalist interior! I assume you were at a table?

Those top pics look like hopped up Chik Fil A, a chicken sandwich with a huge following. I mean, they have traffic control at peak hours. Crazy.

I’m definitely heading for this, since you are rarely so superlative in your word choices.

That pic was taken from a bench + table + chair along the wall - two-tops only. Is that called a booth??? See the pic at the top of the website which was taken before they opened and the counter and shelves weren’t stocked. The other times I sat at tables in the front.
The place has been busier each time I went.

I’ve only been to Chick-fil-A once and didn’t get the reason for the adulation of that sandwich so I can’t compare. Also wasn’t impressed by their waffle fries as I recall.

Hope you like it but to each his own, of course.

I had a disappointing lunch here. I got the original sandwich (Krisp Classic) hoping for some overhang such as above to be able to taste the “wagyu chicken” by itself. But the chicken exactly fit the “smaller than a hamburger” bun and in fact was more than one piece and upon inspection was a couple of small tenders. They were too thin and too fried to get an idea of the quality of the chicken with all the other ingredients, until the final bite which was thick enough to see the white meat and it was very tender.

They have waffle fries or tots, and neither are exciting to me. The tots were mushy inside and I didn’t eat many.

This did not look like your pictures at all.

There are some very negative reviews on Yepl, a lot of them to do with pricing, some with ‘didn’t taste like anything.’

I had some minor issues with the front of the house (not asking if I wanted spicy, etc.) but thought the back of the house knew what it was doing.

Sounds like that thing never should have left the kitchen.

And this is one of the reasons I’m rarely superlative in my praise of a place. I’ll go back to being noncommittal.

Continue your reviews, it is your experience! I wonder if - it being Monday - they didn’t have a shipment of the chicken breasts or something but handling it that way is not cool. The value was just not there. It was like a slaw sandwich, the dominant flavor. If I went again, I would have them leave that slaw off also.

Speaking of value, how about those new payment stations I am seeing more and more, where you slide your card and choose a gratuity up to 25% before receiving any food OR service? I find that annoying. I did add 15% to this order because I anticipated the best, even though it is essentially fast food and they shouldn’t be asking for gratuity at all IMO, especially while waiting and watching for you to plug in the amount.

Never having worked in a resto I don’t know all the things that could have gone wrong. I was thinking the manager of the back of the house was off for the day??? New employee who didn’t get the training?? I sure hope it’s not a sign they’re cutting corners to save money after only 2 months in business. But I’m leery of returning myself.

I am not happy with the new payment stations. First encountered at Killen’s in Pearland when i attended a popup of his future BBQ place at his Steakhouse. I believe it’s true that every one I’ve encountered does have a ‘No Tip’ option, although I had to search for it (up in the left corner of the screen) one time, and everyplace has still had a tip jar on the counter so it has not bothered me to not add a tip although I’m still shocked when I encounter it.

I’m not really much for tipping at counter-service and take-out places anyway. Offer me the opportunity to tip after eating and I’ll have a different attitude.