I only discovered Korean Fried Chicken a little over a year ago (probably later than some of you). I loved it after my first bite. I just love the very crispy and unique crust and the bean paste, garlic, soy sauce seasoning. 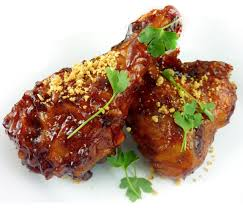 For those of you who have tried Korean fried chicken, what is your opinion? Do you like it? Do you not like it?

I get it at Namu Gaji (San Francisco) and it is one of my favorite things ever.

It’s seriously addicting. The place I get it from has 3 sauces. I never can remember which one I like best. Only problem with eating it is waiting a few minutes for it too cool so I don’t burn the roof of my mouth.

A KFC joint just opened in my neighborhood OMG good stuff. Luckily they are super busy and have a long wait time or i may be eating there a lot.

Do you live in Philly? I thought we have a conversation, and we agreed that the Bonchon in Philadelphia Chinatown is ok, but not great. So which is the new KFC you are talking about?

I’m generally very fond of it! In the SFBA, the higher end places render out the fat from the skin so that the skin shatters when you bite into it. It’s like poultry caramel. My favorite casual places, the kinds of places where people go for drinks and it’s not unusual for there to be smokers inside, have bulkier chicken. I don’t know if it’s skin, batter, or what but it stays crisp in leftovers despite the heavy amount of sauce.

The standard sauces seem to be garlic soy and a spicy red sauce (gochujiang?). Are there other sauces out there that people are fond of?

Is there a Korean term that distinguishes KFC from other types of fried chicken? My host in Seoul last year did not appreciate there being a difference and Took us to a place with chicken no different than I’ve had a Chinese restaurants

The place I go to has 3 sauce choices; sweet, soy garlic, and hot & spicy. All are quite good. A news article states they use 28 seasonings for the chicken (fresh) and double fry it.

Had my first taste of at the time bootleg “BonChon” KFC in a second floor loud bar/club/restaurant/dive that is so popular in Manhattan’s K town and it was worth the ringing ears but then they began springing up all over NYC and NJ each with different recipes and glazes.
I will say that as a snack it’s good but to make it a whole meal { bucket sized portions} it begins to get a bit cloying even though the traditional pickled dikon radish is an excellent accompaniment.

Now I tend to order a few wings on the side when ordering Sushi or a Bento box.

but to make it a whole meal { bucket sized portions}

Is that a general problem for all fried chicken (any style) or is this a bigger problem particularly for Korean fried chicken? Thanks.

Well … not really. I can scarf down a bucket of Popeye’s Spicy with nary a breath in between and still have room for their salty biscuit goodness.

I’m all over that

This stuff is serious crack and I rue the day I had my first bite. I love the stuff and can chow down an entire order easily myself. My waistline hates me for it, but my tastebuds can’t resist. It’s by far my favorite style of fried chicken right now.

I see. Basically, your tastebuds disagree with your waistline. We need to have a summit for that.

first, why can’t i see the date of the posts?

ok, i love k-fc. it is so crispy and not oily at all. the chicken is also marinated/brined which adds to the deliciousness, i am merely ok with the seasoned chicken because it is sticky. stickier than buffalo wings.
i prefer the plain k-fc, even if it may taste a bit bland. different restaurants season up the plain k-fc differently. my favorite k-fc plain fried was chicky pub but they seem to have disappeared here in the seattle area.

LOL whatever kind it is, as long as it is fried chicken, I still love. To be honest, I am addicted to Korean sauce eaten with chicken. Add some chili sauce and enjoy!!!

Marinated the chicken in the dry rub, made the sauce waiting to fry a popcorn variation tonight alongside green onion pancakes and wine.

It was delicious as is even better with the scallion pancakes. messy shot of the leftovers. 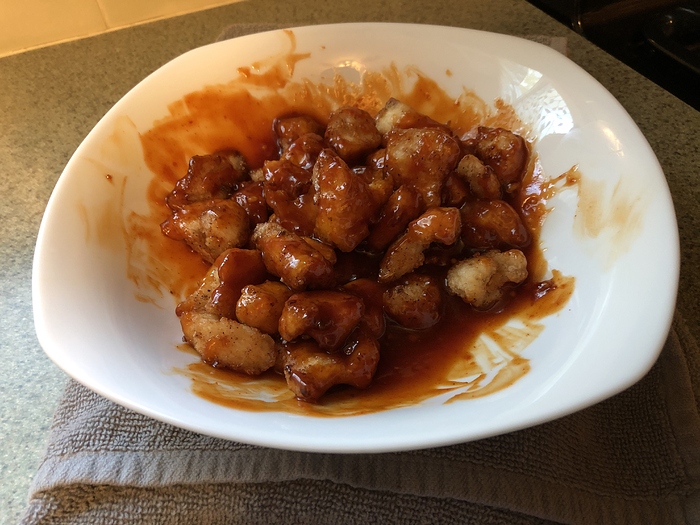