My husband and I left our north of Boston home this past Monday in a quest for lobster. Unfortunately I mentioned the Maine Diner in Wells and he became obsessed. So, we had lunch there…no wait but there was a steady stream of customers while we were there . Grilled hot dog and fries for him and the chicken breast supreme sandwich for me. It was exactly what I expected. His dog was better than my chicken. No Almaden wine for either of us.

Back in the car and meandered our way up route 1 to Portland. We checked into the Armory not far from Commercial Street around 3:00 and walked around for a bit. The weather was beautiful and it was nice to be out of the car.
Big cruise ship in the harbor, so there were a lot of visitors.
We decided on Eventide to start our dinner, half a dozen oysters for him and lobster ceviche for me. Oysters selection was really nice, I did not have any but he really enjoyed them. Especially the horseradish ice that came with them.
My lobster ceviche was outstanding! We were sitting at the bar and watched it being made.
Very fresh, cucumbers, pickled daikon, carrots.
Still hungry I ordered the brown butter lobster roll and he ordered the red curry seafood stew. The lobster was on a bao type roll and the brown butter really put it over the edge. Very rich, thankfully I had help eating it. I would not been able to eat the entire thing on my own.
The curry stew was well done, the mussels were very flavorful. Would eat that any cold winter night.
We headed toward the harbor and ended up at the bar at Scales. Really beautiful space, the wine list was good but we either made bad food choices or the food is not up to snuff.
I ordered the clam chowder and he ordered salt cod croquettes.
The chowder was not milk based, which is fine, but it did not taste of clams at all. It was more of a chicken soup. The croquettes were pretty good, salty as you would expect. But nothing special.

We had coffee and bagels the next morning at the Crooked Man coffee shop before getting on the road. There was a restaurant across from us called Petite Jacqueline that looked very interesting, if anyone has been? Its on our list next time we go back to Portland.

In the car, heading north on Rte 1, we were making our way to the Cladgagh Inn, Rockport. We took the long way and stopped in Bath to see the ironworks and then to Boothbay Harbor where we had very nice lobster stew and rolls (butter) at the Lobster Dock.
Boothbay was really pretty, very easy to get around. Much less crowded than Portland.
Checked into our motel in Rockport, and headed toward Owls Head, walked out to the light house. Great views, but we were too late to walk up into the lighthouse. Next time.

We ate dinner in Rockland, at In Good Company. Highly recommend this place. Small dining room, even smaller kitchen but the food was top notch.
We had fresh bread, EVOO with pistachio dukka (duqqa). We liked it so much, we saved some to toss on the green salads we ordered. Which were exactly what we hoped they would be, fresh and lightly dressed in a lemon dressing.
Then we split a halibut plate on yellow lentil dal and spicy cauliflower. Very sophisticated meal but the gelato trio was the best… and a perfect ending.

We had coffee and egg sandwiches at the Atlantic Baking company in Rockland the next morning. All the baked goods looked really really good, but I was just happy to find a strong dark roast coffee. Always a challenge when traveling.
They also had sandwiches to go, yogurt and fruit.

Back on Rte 1, Bar Harbor the goal. We went to the Penobscot Narrows bridge and observatory. An observatory in one of the bridge towers, amazing views. You take an elevator to the top, a small space but the views were just stunning. Put it on your list!

Finally got to Mt. Desert Island and headed directly to Southwest Harbor and Beal’s Lobster Pound. Not too busy. Parking a little bit of a challenge.
3 different kinds of lobster rolls, steamers, mussels, fried food and LOBSTERS! They had both hard and new shell lobsters, priced by weight and shell type.
We went with a traditional (butter) lobster roll, lobster stew and a 3lb new shell lobster with corn, biscuit and coleslaw.
Probably the best lobster we have ever had. Fresh, cooked perfectly. Even the stew, not over cooked at all. I’m sure its the trip, the timing, the weather all coming together, but it was really just a great meal.

Took the long way to Bar Harbor and got in around 3:00. Checked into the Quimby House and rested a little. We headed out around 5:00, more to walk off the lobster then anything. Lots of people out and about, we stopped at the Mache Bistro for a wine and a bite.
We ended up with a spinach salad and a grilled radicchio salad, steamed clams in a red sauce and smoked carrots with lentils. Not sure we would rush back, but an different menu from most of the restaurants in the area.

Next day we found coffee and bagels in town and then did the shore line walk. The Norwegian Dawn ship was i portn, so even more visitors walking around. Found out later this was the ship that last power in the middle of the ocean and drifted around for a few days.
Not sure you could pay me enough to get on one of those…too big!
We picked up our Arcadia National Park pass and headed out…the loop road. I don’t think I can give this area justice. It is a trip that you just have to make. And we didn’t even hike the trails, just the easy access scenic spots. I would love to walk the carriage roads.
Sand beach was a treat in the middle of all the rocks. And of course the trees were in full color, so the overviews were spectacular.
We had lunch at the Jordan Pond House, known for their popovers. Which were really good. Crunchy outside and eggy on the inside. Seafood and lobster stew with salads finished the meal off. Lunch on the lawn overlooking Jordan Pond. Pretty setting.

We had tickets for a sunset cruise on the Margret Todd schooner, a 4 mast sail boat. That was fun, and we were hungry by the time we got back to land. Ended up at the Fin Bar for beer and dinner. Fish and chips for me, hanger steak and mashed for him. Good beer choices and the food was pretty good. Fish batter needed a little salt.

Friday morning and time to head home. Breakfast at Jordans, blueberry pancakes, eggs and toast. Busy diner, good travel food.
We headed out 1A to Rte 95 south. A long drive home. We started to get hungry around Portland. I realized I hadn’t had any fried clams, so we actually ended up at Bob’s Clam Shack in Kittery. Split a clam/haddock plate with onion rings. Perfect way to end our trip. 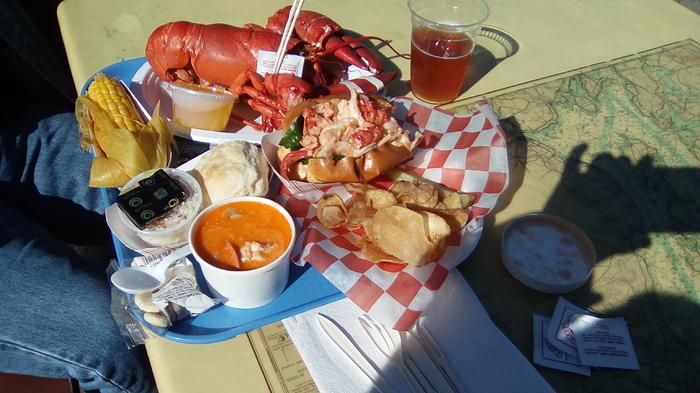 Thanks for your report, Grumpy. We were up there about the same time and it was a wonderful fall weather week. Lovely! We stayed in Kennebunkport but got as far north as Wiscasset for our regular pilgrimage to Red’s Eats, in our opinion, the best lobster rolls around. It was not too crowded, and I believe it was their final week before closing for the season. In Portland we stopped at East Ender for a nice happy hour. Then moved over to Eventide for some Damariscotta oysters, then for a full meal at our old favorite Fore Street. It was energetic and terrific! Those musing about the decline of this great restaurant are sadly mistaken. Got as far south as Portsmouth were we enjoyed a brew at Portsmouth Brewing Company prior to a multi-course meal at Moxy. Much more too, which I will share on my own thread…

Good to hear that In Good Company in Rockland is going strong as ever. The owner, my old friend Melody, is a great chef. I actually interviewed for and was offered the position as her #2 back in Spring 2007, but turned down the offer. You saw how small the kitchen is, and I’m 6’2", 230#; it was way too tight a fit for me in a kitchen where I can reach out and touch every wall and the ceiling without moving. But between In Good Company, and Keiko’s Suzuki Sushi, my weekend dinners were always fabulous. (I ended up staying in town for a year or two and rented Melody’s family’s house. Living with/in a chef designed kitchen was very nice.) I was in Rockland recently, and while there are quite a few really good new places, and some excellent older ones, those two are hands down the best.

Great town, too. Love the Farnsworth Museum and works by the Wyeths…had a good meal at Primo a couple of years ago.

I have liked and loathed Primo’s. I lived on the Bay a two minute walk away and there was no consistency at all. To paraphrase Longfellow, “When they were good, they were very good indeed, but when they were bad, they were horrid.”

I guess we hit it good…

The time I spent in Owl’s Head/Rockland were some of the most pleasant, and fulfilling, (and filling), years of my life. In the 70’s/80’s Rockland was desolate, with half the stores on Main St. closed. The only life was during the annual Lobsterfest. Then the credit card company came to town (and left later), and an art gallery or three opened, then some restaurants, and the Farnsworth art museum, and soon there were two dozen art galleries, and all the restaurants, and events, and festivals, and farms, and farmers markets. I am seriously thinking about moving back there permanently in the next year or two.

Thanks for the virtual trip!!! I miss Maine!!!

I look forward to reading your trip report! I wish we had gone to Fore Street instead of Scales.
Next time…

Primo was recommended to us, but not open on Tuesdays. The menu was not exactly our cup of tea so we didn’t mind too much. We really did enjoy In Good Company.