The family and I met down at Killen’s on Saturday morn last to celebrate OBD’s completion of another trip around the old sun. We’d been there before and thought it was good, but not worth the drive frankly. Nevertheless, we met there again primarily as a matter of logistics. I’ll admit that I was looking forward to it though and it did not disappoint.

We arrived about 10:30 to stand the line while we had others meet us there at 11 when they open the doors. Here’s what we found when we arrived. 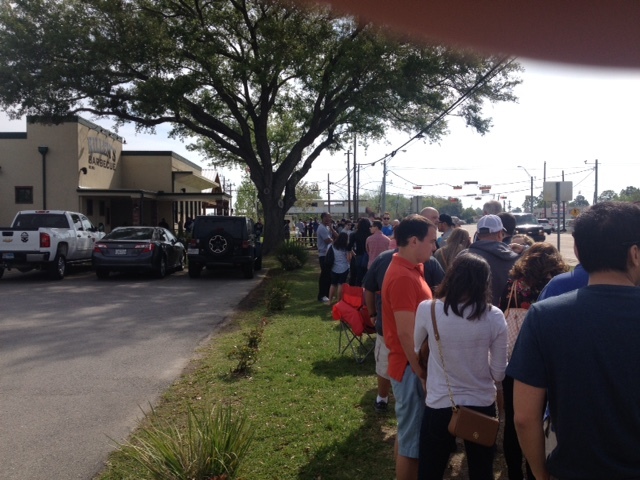 If you’ve ever been there, we were right at the corner where the line turns north again. (Sorry, but that’s the only picture I took; I didn’t even take any pictures of the group!)

The beer guy came by once but as I was driving, I didn’t partake. The group, however…

We got inside a little before noon.

I wound up getting a half pound of brisket, and a half pound of smoked pork belly. The cutter had pulled out a new brisket for the guy in front of me and promptly carved off the bark end and unceremoniously dumped it in a shallow pan presumably only there for that very purpose. When I stepped up I asked for my pork belly and brisket and asked that he include that gnarly little end as a part of my half pound. Instead, he measured out my half pound and then threw it in as a lagniappe. Yay me!! It was the best thing ever. I shared and so it was gone before we hit the register.

The brisket was moist and smokey. As I’ve asserted before, (like yesterday), my favorite is to wrap a slice of white bread around a slice of brisket and go to town, and that’s just what I did there. A little onion, a little jalapeno and I’m a happy boy. I usually eschew the sauce, but as we were presented with three options on the table, I tried a bit of each. Let’s see if I can recall: one was a typical Central Texas sweet sauce, one was similar but with a mustard kick to it, and the last one was a very dark sauce. I thought maybe he had copied Aaron Franklin’s espresso sauce, but if so, it was more subtly implemented. We agreed the main flavor profile of that sauce was Worcestershire. They were all good though and while the brisket didn’t need any enhancement, I thought the pork belly did. It wasn’t very well rendered and honestly was somewhat tasteless. The sauce helped a lot. I ate all of the pork belly but brought a couple of slices of brisket home.

So, let’s celebrate the fact that Houston is finally getting some of that Central Texas BBQ culture that has always been just out of reach for a last minute BBQ lunch. There seems to be a new spot opening weekly.

I’ll be honest, my current favorite is Roegel’s which I am lucky enough to have just a mile from my office. Since giving up the Baker’s Rib franchise, the quality of their meats has improved dramatically. Unfortunately, they had to revamp their sides as well due to dropping the franchise and I don’t think the potato salad is as good. That saddens me as their old potato salad was a favorite of mine. Oh well, they can’t stop me from copying it in my kitchen!! (Mine’s even better anyway, haha!)

Damn! I’ll be in Houston in a few weeks and I was really looking forward to trying Killen’s pork belly. Sad to hear a poor report.

The only time I’ve been to Killen’s was a few years back. I turned up 45 minutes before opening on the second day of his pop-up operation at the steakhouse (a Sunday) expecting a bit of a line, but we were the only ones there for 15 minutes or so. I guess the word is now well and truly out.

I thought both the brisket and the beef rib were magnificent - the best I’ve had, in fact.

(Caveat: I’ve only been to ten or so Texan BBQ restaurants but they do include Black’s and Smitty’s in Lockhart and City Market in Luling.)

I think the pork belly was a daily special and not available all of the time.

In any case, I didn’t think it was worth a hop across the pond. The brisket was excellent.

The next time you’re in Austin, try John Mueller’s for the beef rib. It’s the best I’ve had.

Or better yet, the next time you’re in Houston, meet me at Roegel’s!

The pork belly is on his online menu so I think its a permanent fixture. Best cut of the beast if you ask me, so it’s a bit of a shame to hear it’s not so good at Killen’s.

I’m not the biggest fan of Austin to be honest but if I’m ever in the vicinity I’ll check out John Mueller’s. I did think the beef rib at Black’s was very good too though.

My next brief jaunt to Houston is at the beginning and the end of a road trip and I’m planning to hit Kreuz’s in Lockhart, so if anyone has any recs on what to order there, I’d appreciate it!

The pork belly is on his online menu so I think its a permanent fixture.

I was trying to remember what was on the Specials Board outside the front door that day.

I think it was Smoked Chicken, Loaded Baked Potato, Burnt Ends, and something else, but I think you’re right - I think the belly was on the main menu. Anyway, you might like it, but I’m more used to an Asian preparation and found it somewhat bland. And I gave up the beef rib for it, so the pain was doubled!

I feel for you Doobie, I really do.

It’s the report of the lack of rendering on the pork belly that troubles me. The fat’s got to be melt-on-the-tongue, right?

What were you saying?