Thanks so much for all the great info! Thai North was pretty much the only place I got delivery from in college - those “blackboard specials” were hard to find elsewhere.

This is one of my favorite lunch dishes, Gapao with pork ($7.95) and I finally got a dish Thai Hot, but it was really flavorful. 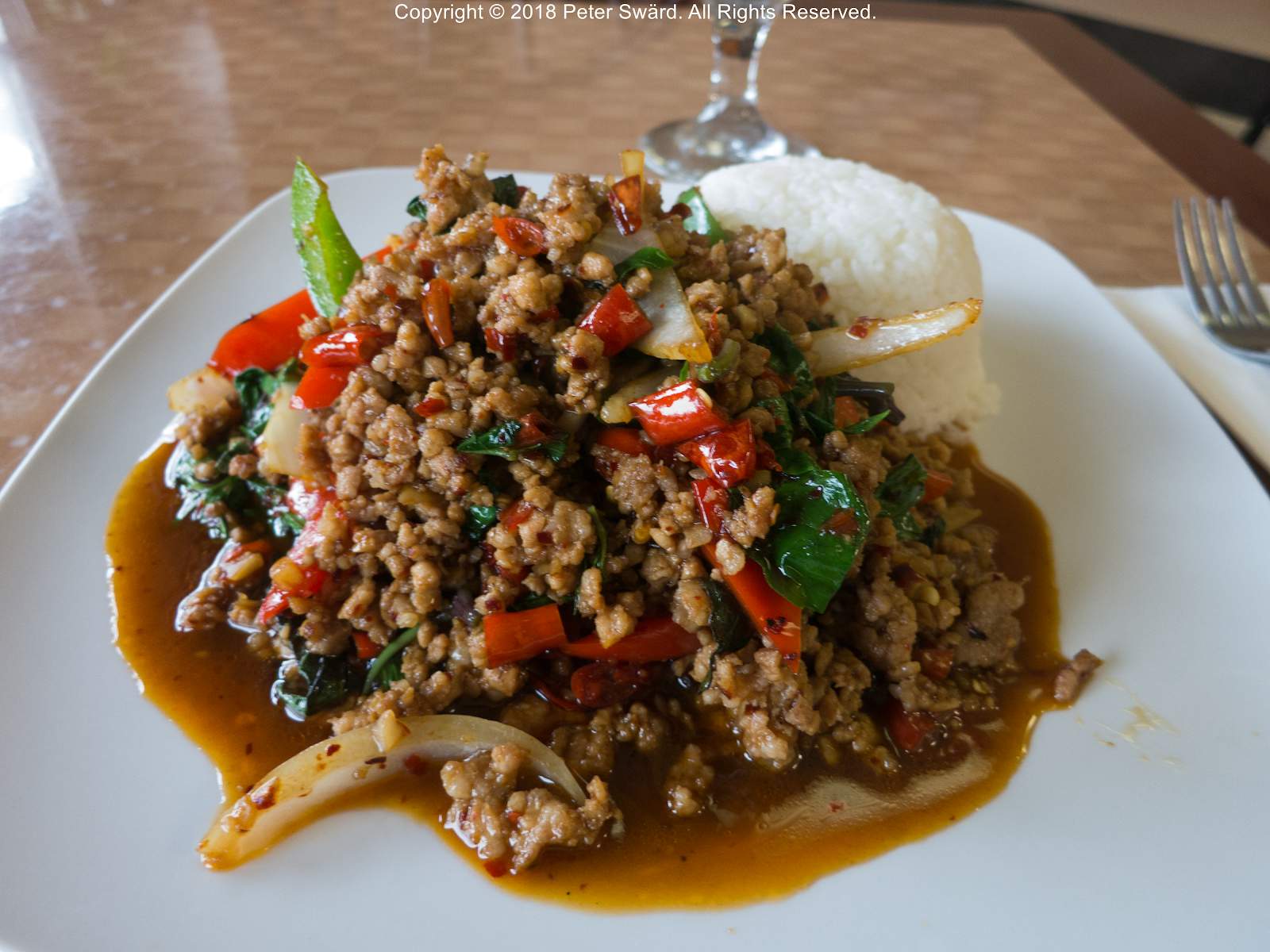 Sadly I have to update that Thai North serves white-meat-only chicken now; apparently too many farang were complaining and wouldn’t eat the dark meat. They did comp us for the resulting cotton-filled khao soi and the staff member I spoke with was sympathetic but said his boss had made an economic decision. I get that the restaurant business is hard and relies on their regulars but it’s still disappointing.

Guess it’ll be duck or pork in my GBA khao soi from now on. At least I know that Khao Hom’s version is good that way.

argh, that is sooo frustrating. totally understand why a proprietor would do it based on market demand, but I so don’t get the preference for white meat. (aside: it’s also a lot harder now to get bone in chicken thighs in supermarkets than it used to be. they’re out there, but seemingly much less common).

on another front, I went to Rod Dee in Porter Sq tonight. Was armed with your suggestions, but they had a special of pork leg with Chinese broccoli and spicy sauce (kao ga moo?), so I went for that. it was pretty good overall: chunks of pork, plenty of cilantro, lots of well cooked greens and the sauce was delicious. some of the pork was perhaps a bit dry and the hard boiled egg that accompanied was a little over to my taste–though well short of the green ring, so points for that. the best part was the moister chunks of fatty pork, and the flavor was right with all of the sauce poured in. For eleven bucks, it was a solid meal. (and a couple more in the tip jar).

I’m sure going back to try the khao soi et al.

Rod Dee had a Thai language menu for many years

fwiw, they still do–it’s laminated and in with the takeout menus up front. whether it has stuff on it that is not on the other menu, I’m not sure…

Coincidentally, I was there yesterday, too, but for a latish lunch – between about 1:30 and 2:30. What time were you there? I imagine you’d be wearing a “moderator” hat or some such, perhaps with a tasteful onion tassel hanging from it, so that you’d be easy to spot.

What time were you there? I imagine you’d be wearing a “moderator” hat or some such, perhaps with a tasteful onion tassel hanging from it, so that you’d be easy to spot.

haha, no I do not have a tassel or even a large onion head mask so that I can be identified. Maybe in the future!

I was there about 5 for an early dinner. And I’d say that the sauce I had with the pork leg was as you say, on the sweet side. I’d have been glad if it had more heat and less sweetness.

I had the Duck Curry (12.95) this week. It only comes in dinner size. Extra hot, of course. The curry is based on a red curry and it was excellent. There was also tons of duck that were really tender and tasty. She even gave me extra rice with my leftovers. 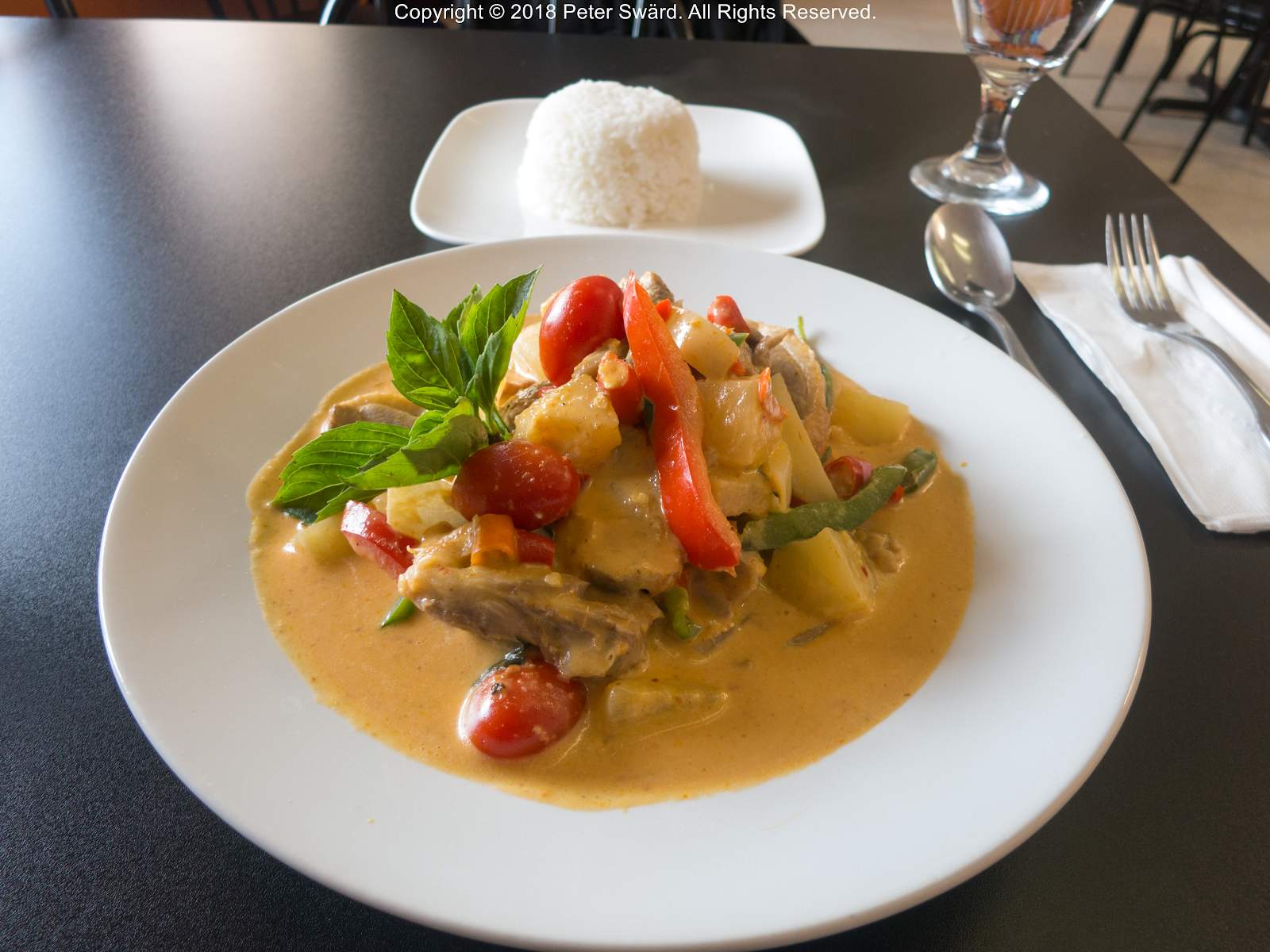 I had the duck curry a few weeks ago. I didn’t think anything could be better than the talay red curry, but this one proved me wrong!

Just wanted to give this place a little bump. I now always get Thai Hot with sliced bird eyes chilis. I tried the fish as my protein and it was always crispy but dry and it was explained to me that for the fish to be crispy, it had to fry that long. Doesn’t make sense to me, crank up the heat and cook it a shorter amount of time. Anyway, after some discussion, I now get the fish not crispy and it’s perfectly cooked. This is the lunch Spicy Green beans with fish. A whopping $8.95 for this. 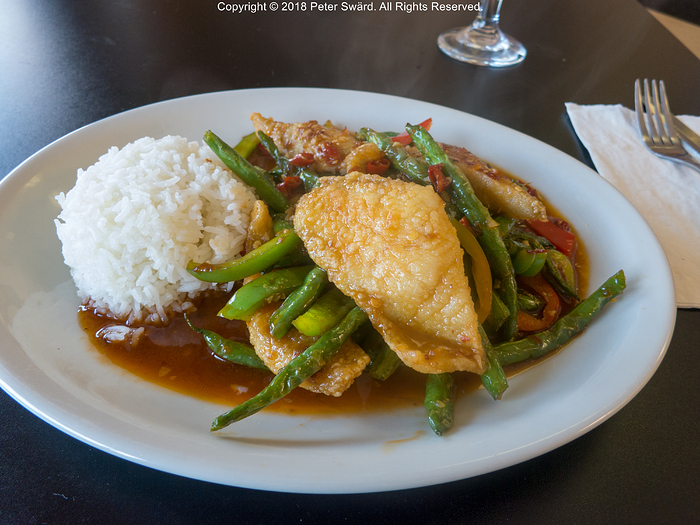 Tuesdays in August, some of the appetizers are half price: potstickers, scallion pancake, spring rolls, and crab rangoon.

I forgot to post that here. I never eat crab rangoons since they are usually terrible. They were fantastic here, more like Rangoon purses. Not impressed by the spring rolls, will try the Gyoza tomorrow.

Yes, the crab rangoons are more filling than wrapper. Even with delivery, they were shatteringly crisp. Just perfection!

Good to know, sometimes I’m in the mood for that traditional New England specialty, crab rangoon

. (Sichuan Gourmet also has good ones, I like ordering them there as a counterpoint to a bunch of spicy Sichuan dishes. Also helps weed out the food police from my dining companions. )

My favorite KH app so far is the beef satay (not on special but well worth it). It’s tender and the sauce is well-balanced, a far cry from the “beef jerky with sweet peanut butter” I’ve had other places.

I imagine it’s baking soda, but whatever they use, their pork, chicken, and beef are sublimely tender, regardless of the dishes they are in.

Tuesdays in August, some of the appetizers are half price: potstickers, scallion pancake, spring rolls, and crab rangoon.

Though not a Tuesday in August as I write this, I am certainly glad to have finally made it over to Khao Hom for a Sunday evening takeout dinner. We ordered spring rolls with our dinner of pad Thai and duck curry. We don’t even normally order spring rolls—maybe we had summer rolls on the brain—but these were crisp and light. Everything tasted fresh and spiced in a balanced way. Best of all, not sweet like so much Thai food that we’ve encountered locally.

Thank you @greygarious for such a delicious find!

Another excellent lunch here. Today I had the Panang curry with duck, extra spicy of course. Really excellent curry with a hint of peanuts. Not on the menu. 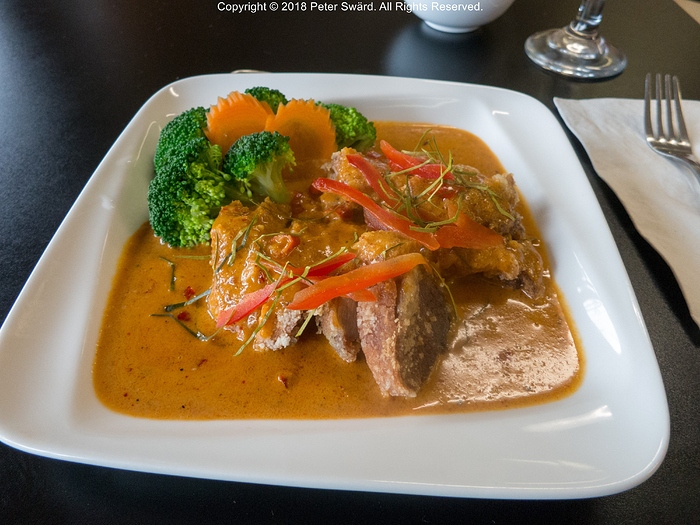 Thanks for all these reports. They’re terrific.

Quick question: How do you get something not on the menu? (Long a dream of mine, along with being able to say – as many do on the more frou-frou food websites: “I was comped two appetizers and a martini.”) Do you simply order “Duck Penang” and hope for the best, or does the staff slip you inside information?

She (the owner) told me that they could do Panang curry after they made it for someone else. If I know that a restaurant have served something that’s not on the menu, I usually just ask if they can do it.

Yes, I’d order something that’s on the menu in a heartbeat (tonguebeat?. But I rarely have this inside information. I must get out more, and eat more lunch.