Technically speaking Sothy’s Organic Pepper Farm is located in Kep, or the borderline between Kampot and Kep. Kampot pepper has a Protected Geographical Indication status, it is world famous for its superior and complex taste. I did a research back at France, the same pepper we found at $40 a kilo can easily reached $130/kg here. 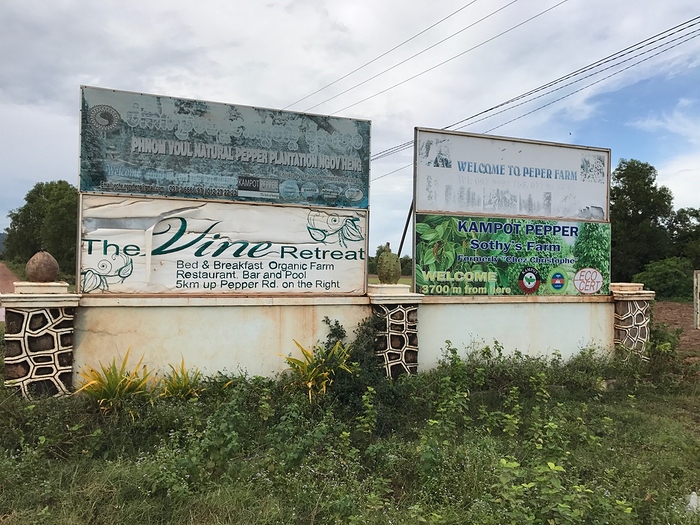 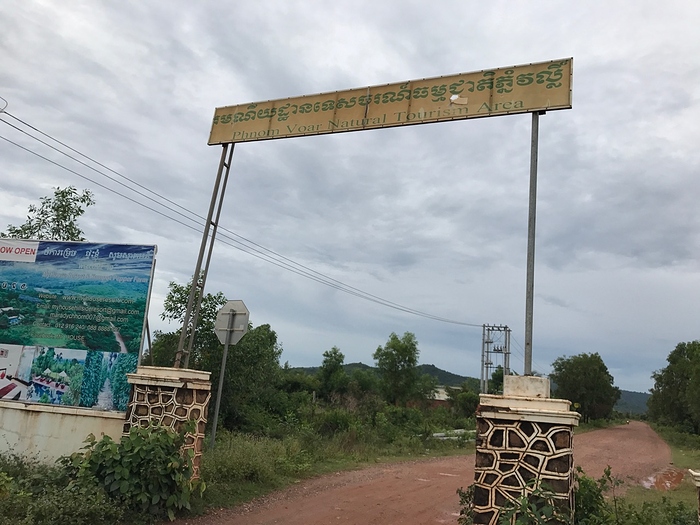 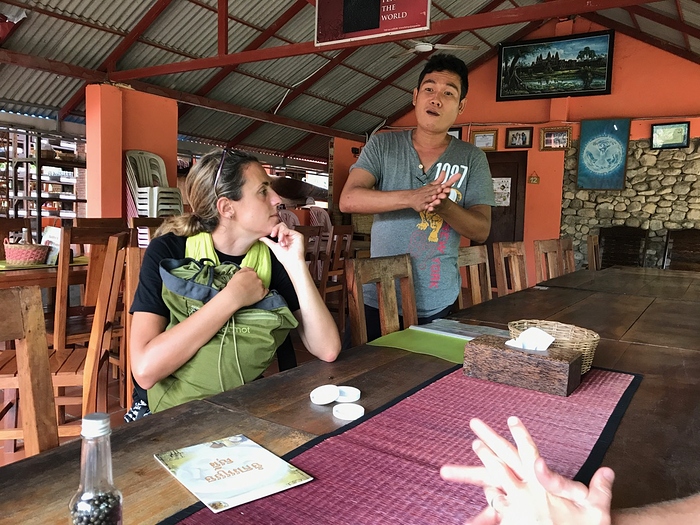 Before they the starting of the tour, which was free, they gave us some pepper to taste.
From the softest to the strongest: red, black and white. 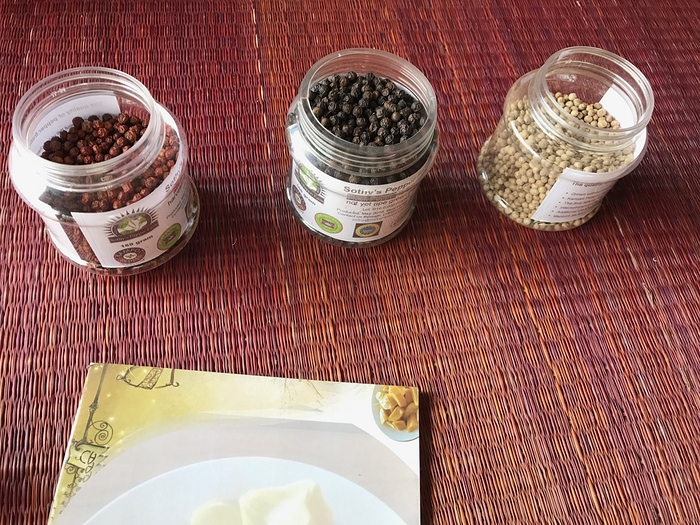 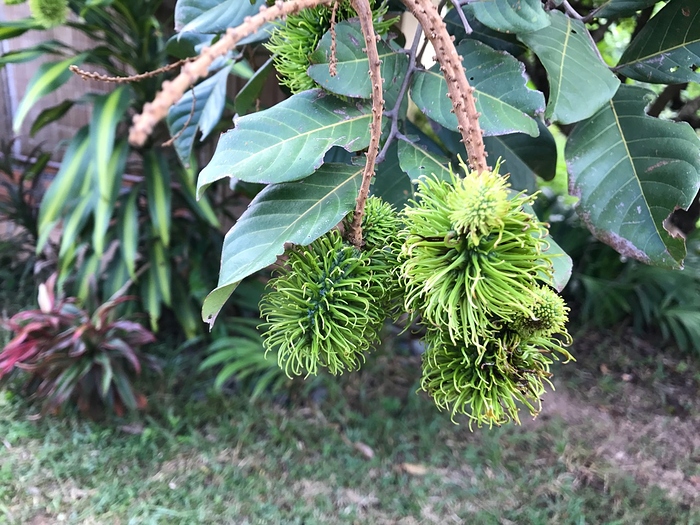 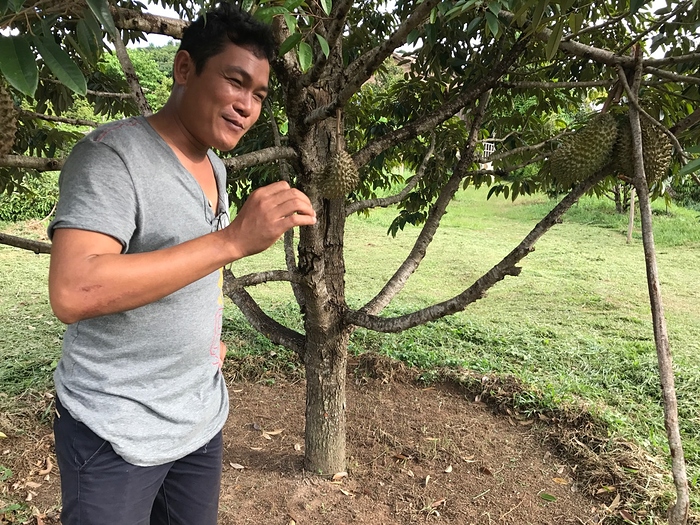 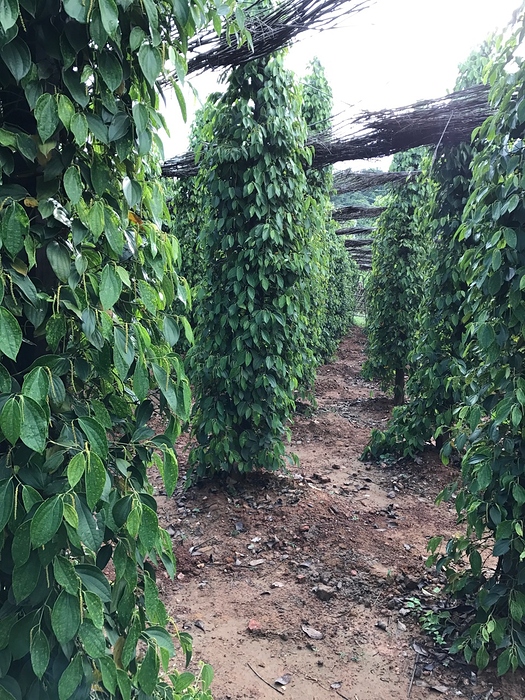 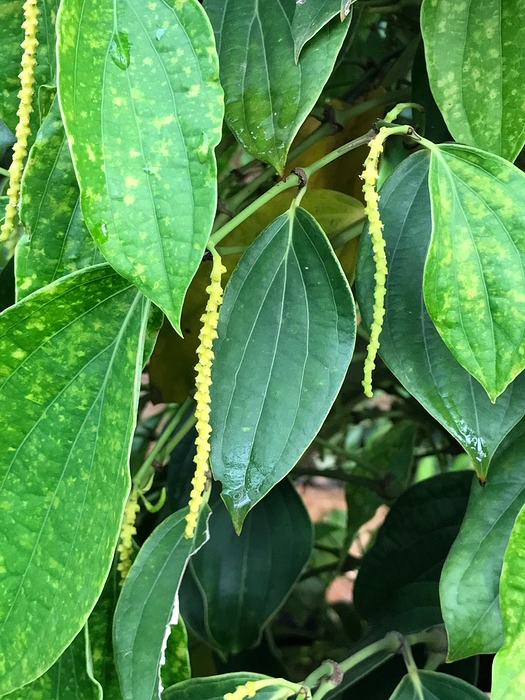 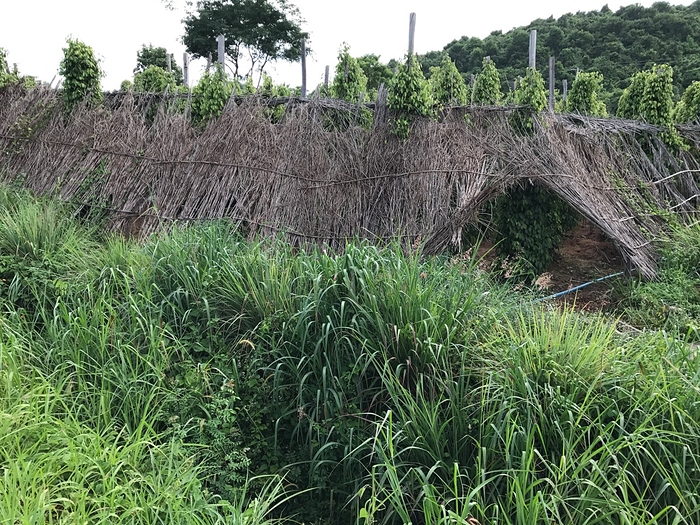 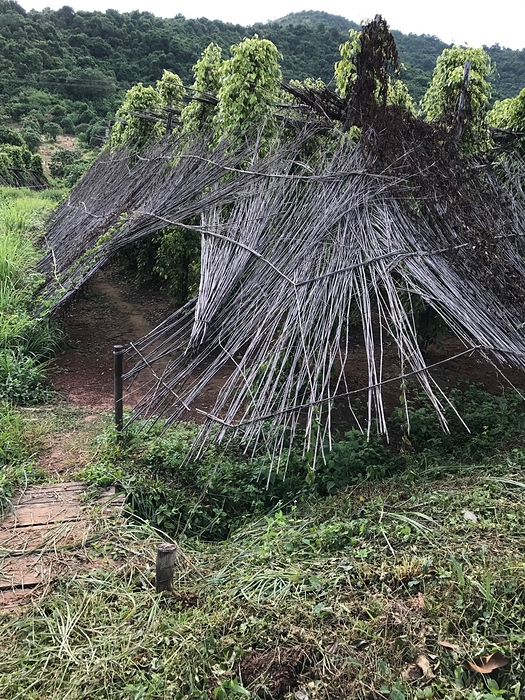 Pepper drying by the sun 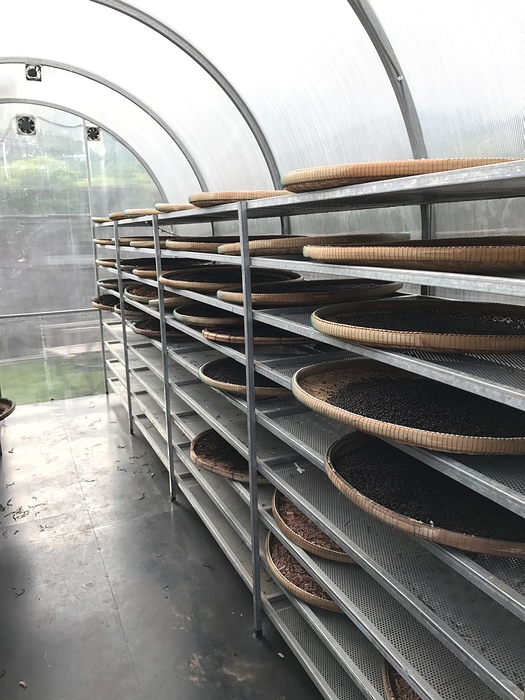 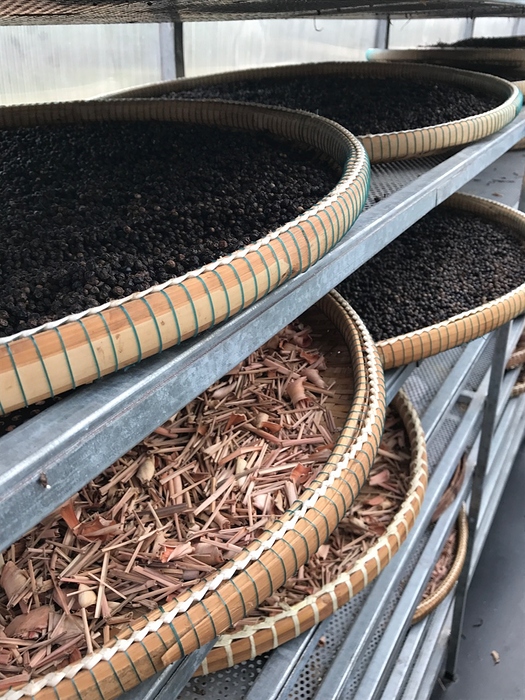 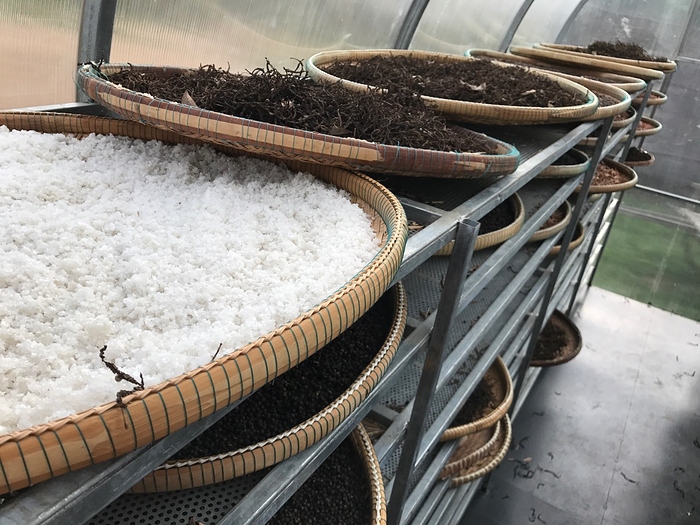 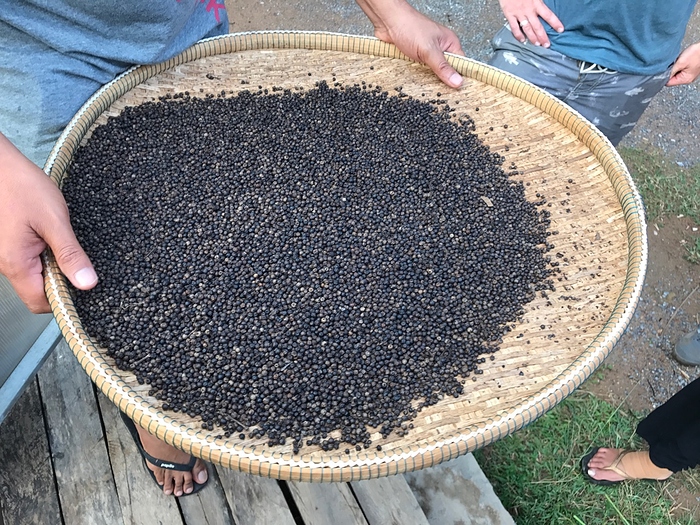 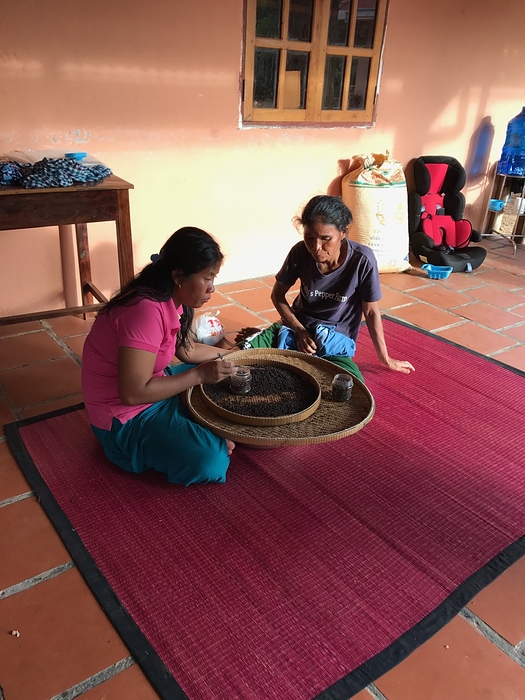 Geese were used instead of dogs for thieves, explained the owner, a while ago, the birds caught some intruders at night. 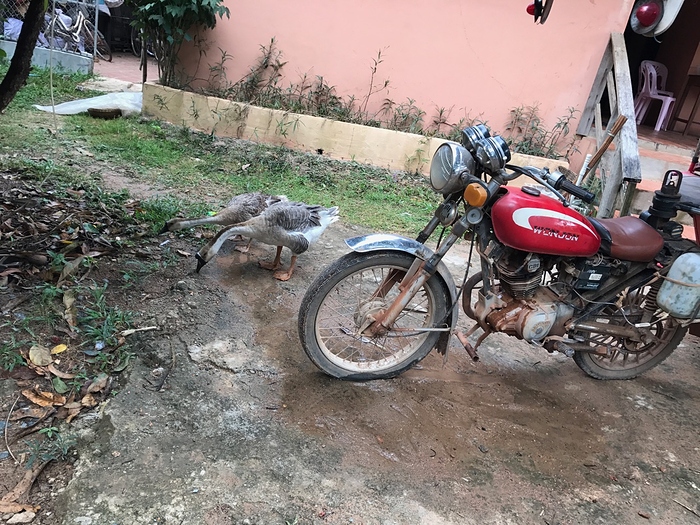 A pleasant trip, we didn’t book in advance, people just showed up at the farm, and when the owner saw a big enough group, he started the tour. We have bought enough pepper for our next few years’ use!

Their dried pepper can be ordered online, same price as in Kampot, plus of course the shipment. Too bad, the pickle pepper cannot be ordered, they only sell them in their shop in Kampot.

More information about pepper and the farm:
http://mykampotpepper.asia

How would you describe the differences of the red, black, and white peppers? Which did you like best?

I did another tasting test just now. Not easy, as one of the characteristics of Kampot peppercorn is its lingering effect long after eaten, it stays on for a long time. So tasting one peppercorn after the other does have a “numbing” effect.

When the peppercorn is dried from green pepper, you obtain the black pepper.
The peppercorns continue to mature, the dried mature version will become the red pepper (with the skin on) and white, when the skin is striped off.

As for the taste, the red pepper has a a note of vegetal, kind of “sweet” note, similar to the taste of white pepper. You feel the heat after the note of floral note fade away, but not as bold as and doesn’t linger like the black.

White is in fact the strongest in taste, you sense the note of firey heat, similar to the red, it is not staying.

Black, you feel a less of the “floral” side, when compared to the red, the spicy heat “grows”, it is bold and the most pungent among the 3. It lingers on for quite a long time, and makes believe that it is the strongest in heat.

I guess, I like the black pepper the best, but it also depends on what I am eating.

My face is red. Several weeks ago I read something about red peppercorns somewhere on the internet, so I bought a can of them at a local specialty spice store. I hadn’t gotten around to looking at them yet, but I picked up the can today. It is Kampot red pepper. So I emptied out one peppermill and filled them in it. I did notice the lingering effect. And I’m very glad that I didn’t go and order anything new without trying what I already had in the kitchen.

And I’m very glad that I didn’t go and order anything new without trying what I already had in the kitchen.

This is typical me, I didn’t really know what is in my fridge or on the shelves anymore!

If you find the red one lingering, you should try the black one…

I suppose I’ll order both the black and the white when we get back from Sardinia.

White is in fact the strongest in taste, you sense the note of firey heat, similar to the red, it is not staying.

Odd. Red minus the skin and it becomes stronger…

Odd. Red minus the skin and it becomes stronger…

I think this explains well:

The difference in flavor between white and black pepper relates to how they are processed. To make black pepper, unripe berries from pepper plants are gathered and dried until the skins are blackened, which gives it its characteristic aroma and sharp bite. White peppercorns are fully ripened berries that have been soaked in water to ferment, and their outer skin is removed before drying. Although stripping the skin away removes much of the volatile oils and aroma compounds (most notably piperine, which is responsible for pepper’s pungent heat), allowing the berries to ripen longer lets them develop more complex flavor, while fermenting adds another layer of flavor.

I read that the white peppercorns has a shorter shelf life than the black ones, it turns bitter and stale quicker.