As most of you will know, Judy’s Bay (interesting name that, and their website does not offer an explanation) is an izakaya that took over the Bondir space. I got around to takeout from them yesterday – it was superb.

We got the sake chicken set, scallop fried rice, pork dumplings, a salady cabbage side, and extra kimchi (because, of course). The rice in both dishes was beyond all expectation: plump, loose, firm grains – precisely balanced between chew and soft. My wife who is by far a pastafarian over a riceonian paused in the middle of her meal to say “My god, this is great rice.” Plus, the rice in the two dishes was quite different, the chicken slicked with chicken fat, the scallop lighter and bedecked with tiny baby-cauliflower florets, and the like. The dumplings were excellent as dumplings, but what made them soar was the thin, sesame oil/water they came in with haunting notes of shiso. They were lovely.

The cabbage salad was very tasty but I could have lived with the cabbage being chopped more finely. The kimchi was terrific. The two chicken thighs in the set were beautifully moist (you’d think that’s a given for a thigh, but one encounters so many determined efforts at drying out the succulence), and packed with flavor. The scallops were perfectly cooked, but for $28 (the with-egg price) I would have preferred more than two. These are minor quibbles for food being executed at this high and precise level.

We also got the tapioca-coconutmilk-strawberry dessert – in fact, we’re such suckers for tapioca and coconut milk (a major reason for our love for China Pearl) is that I got 5. Excellent, too, at least the two we’ve had.

Sounds exceedingly tasty, thanks for the report!

At $14 per scallop I hope they were the size of hubcaps, covered in a dodo egg.

One is paying for the egg and the perfectly executed rice, of course, and (unfortunately) these days $20ish is not unusual for top quality fried rice.

Unfortunately the Globe article is hidden behind a paywall, but I just did some digging and this seems accessible: 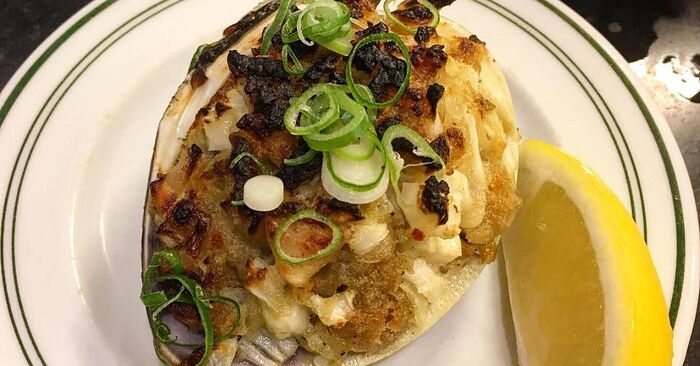 Judy’s Bay, a New England Izakaya, Will Open in the Former Bondir Space This...

these days $20ish is not unusual for top quality fried rice

Perhaps not in the increasingly precious Boston dining scene, however yes, this is quite unusual. I will be a broken record here and reference recent meals in New York City, which did not used to be less expensive than Boston.

I paid close to $20 for fried rice at the new Urban Hawker in Manhattan recently. Jing Fong in NY, not an expensive restaurant, charges around the same for their salt fish and chicken fried rice, as does Danji for their kimchi-bacon fried rice. Sure there’s cheaper fried rice to be had, both there and here, but I’m talking about high-quality versions.

The JB version had a $2 surcharge for the egg (“two-bucks for an egg!!! When I was a kid I could get a dozen at that price”), so the scallop rice was $26. If you allow $5 for the two-scallop surcharge, the price is not totally out of line for top quality fried rice elsewhere. And, as I’ve indicated, the JB version was at the very top of the versions I’ve had anywhere, anytime. What price do you put on that?

I know that people expect fried rice to be cheap food. So did people expect of pasta. Yet the current giulia menu lists pastas ranging from $26 to $30 (and two truffly ones at $85 and $95). People have adjusted (for better or worse) to higher pasta prices, but not it seems to higher prices for superbly executed fried rice.