Will do. Feeling mood for some improvised Chinese burritos… basically sesame chicken pork fried rice and a ton of duck sauce and hoisin sauce on a mooshoo pancake. My own personal pre chipotle creation. Sometimes I’ll swap out for lemon chicken.

Oh boy! I hope no kids are reading this lol

Oh wow. Autocorrect doesn’t catch that???
Makes for a very different meal for sure.

Feel like that belongs including the g spot thread

I went to try and order delivery but I’m too far.

Jinli review, Part 2. Well, we ended up going back to Jinli for dinner tonight. I think I am all cooked out, and prefer to eat out whenever possible. We had the free appetizer of cold tofu in a spicy chili sauce. It was good, if you like cold tofu. The seasonings were spot on. We then tried the West Lake Beef Chowder, to compare it to Sichuan Cottage’s version. The Sichuan Cottage version definitely is the better tasting soup. Jinli’s beef chowder definitely had an egg drop soup base, thick on eggs and very light on cilantro, just a few pieces. There was less meat in this soup as well. I very much missed the cilantro flavor that is prevalent in Sichuan Cottage’s soup.

We then had another order of the soup dumplings. They have become an instant favorite. The dough is on the thick side, to be sure, but the meat and “soup” inside is seasoned nicely and flavorful, and bursts open when you take a bite.

We then had the twice cooked pork belly. I thought it was overly salty, and the meat was tough, perhaps from being cooked twice. I had hoped it would be more tender. My husband thought it was tasty when he mixed it in with the bowl of white rice they gave us.

Finally, we tried the lamb with cumin, to compare it to Sichuan Cottage’s version. My husband says he favors the version served at Jinli. I found this version to be less “lamby” tasting than the one from Sichuan Cottage. There were a lot more Szechuan chilis in this version, but there was also more meat than the Sichuan Cottage offering. I thought there was more cumin in the dish served here, so if you like cumin you are in luck. Both versions are tasty, in my opinion, a little different, and I would say it was a tie on the lamb with cumin. 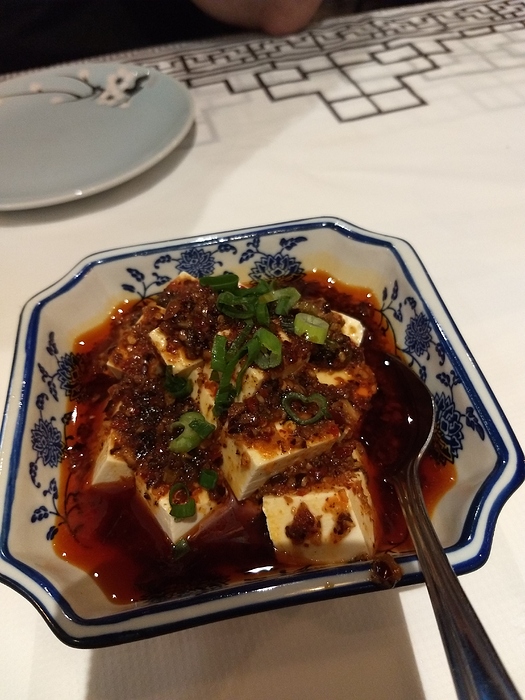 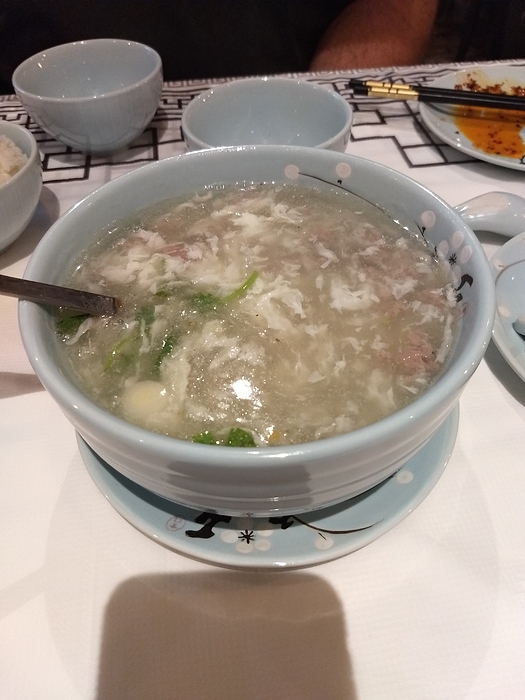 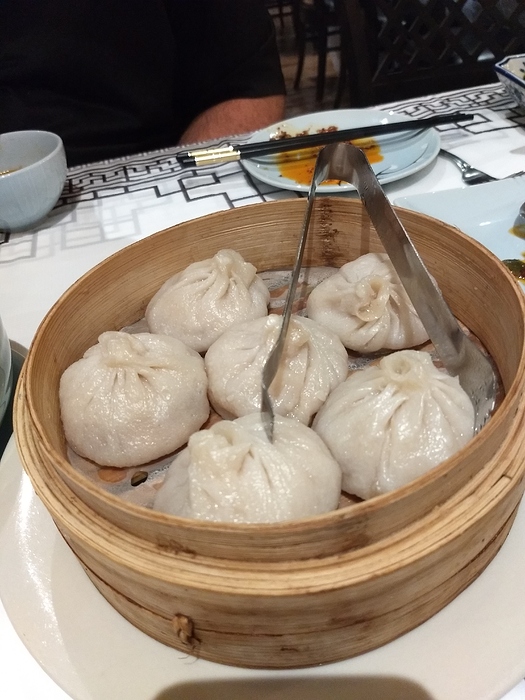 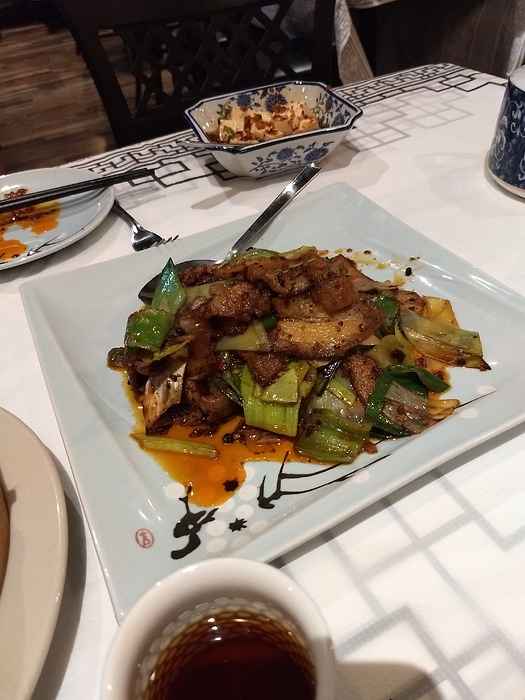 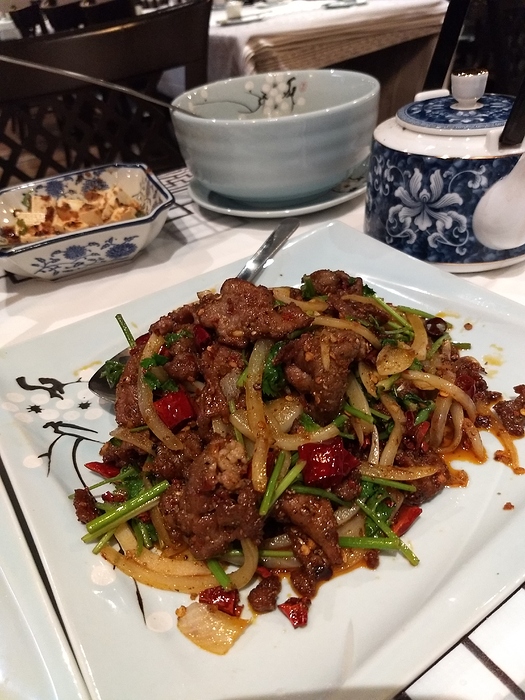 Nice pics! I never thought the beef chowder would look like that at all. It looks like some regular egg drop soup lol

(If I am seeing the correct picture)

As far as the pork goes, was that roasted and sliced pork? Forgive my eye sight.

Yes, you are looking at the Jinli version of West Lake Beef Chowder. It does look just like egg drop soup, with some meat added, and a few springs of cilantro. I forgot to add in my prior post, that it tasted a lot better when we added some of the cold tofu and chili oil and spices, but then it really was not the soup it was supposed to be, before or after.

The pork was supposed to be roasted and sliced pork . . .to me it tasted like Chinese bacon.

That is interesting. Did you get some smoke flavor from it or was it just the texture? Sorry for all my questions lol. This place seems neat and I’m trying to get some intel

We hit Jinli again for lunch today, but went with sort of standard dishes: Kung Pao Chicken and General Tso’s Chicken. (Mark had a craving for them.) The Kung Pao Chicken was somewhat spicy (and had dried red peppers in it) despite a lack of pepper symbols on the menu. The General Tso’s Chicken was very well prepared, but we probably would not order it again–there’s so much Jinli has that’s better/rarer. One note: we were brought forks today. I don’t know if that’s a hit-or-miss thing, or the dishes we ordered seemed to indicate they would be necessary.

I suspect we will work our way through the entire lunch menu eventually.

That is awesome! I’d love to try every dish there.
So does this place have the pickled vegetables or the fried noodles and duck sauce (or both/none)

No noodles or pickled vegetables at lunch, either time we went.

Well I’m going to give HO and my fellow Ho’s a shout out on this one, I would probably never bothered to try this place if it weren’t from reading this thread. Saturday night my wife and I had no plans so we decided to take a ride over. Arrived around 6:30pm walked in no wait and received a table. As noted by eleeper, no fried noodles or anything to snack on while looking at the menu.

The restaurant filled up quickly and from a quick observation I would say the crowd was 70% Asian and 30% “other” so to me that’s always a good sign in a Chinese restaurant. Our order was taken:

Edemame was fine, nice sized serving for a “free appetizer” which is some kind of special they are running. The Cumin Lamb was excellent, I truly enjoyed this dish, the flavors were wonderful and while it was hot / spicy not so much to make you break into a sweat. Just enough heat to make the dish very flavorful, my only critique would be the flavors were so strong they completely drowned out any lamb flavor. Not being critical, it was still very good, I’m just a big fan of lamb and would have appreciated some lamb flavor which this did not have. Still a very good dish and even better if you’re not a fan of lamb you would never know you were eating it.

The shrimp and broccoli was very good as well, the dish needed nothing, very good.

The fried rice was the big disappointment in the meal. It wasn’t very “fried” and it was very salty and very wet/pasty. It also came a good 20+ mins after the entree’s were served. We asked several servers to check on it and we were told “it’s coming” each time. I was literally 90% finished with my meal and stopped eating for 5 minutes before the fried rice came, just so I could enjoy some of it with my meal. Since my meal was almost complete and I wanted to "spice’ the rice up a bit, I requested hot mustard. This was rather odd because I have never experienced a Chinese restaurant that served “to-go” mustard in their restaurant. Usually Chinese yellow mustard is thick and almost paste like when in restaurants, the “to-go” packets are bright yellow and have an almost gelatin glossy consistency to them. This was literally the to-go packets of mustard emptied onto a little plate. Like I should have taken a picture because I do think they literally cut open a few hot mustard packets and served it to me. Very odd.

All in all I would certainly return, although the service was fairly bad. Not only did the rice take forever and a day, the servers are rather un-attentive and fairly brisk in their service. There doesn’t seem to be any floor organization with servers and sections it seems to be a free for all with everyone just “doing” what needs to be done without any organization to the service at all.

$45. with tax so $55. overall and well worth it. I would certainly return but it’s a bit of a hike and it wasn’t so good that I’ll be rushing back, but certainly would go again.

I had to visit this place after all I read. It is good to have 2 good Sichuan places in this area. I like both restaurants and the variety of offerings. My comments on JinLi are that the tea smoked duck was dry (never had it before so this may be OK), West Lake Beef Soup very tasty, twice cooked pork belly is very good, ox tongue & tripe a bit strange but OK, braised whole fish with spicy Sichuan sauce would have been better if it was something instead of tilapia (sea bass or red snapper?) They have a large menu so I will go back to sample other dishes.

We went back to Jinli yesterday (after discovering that Sichuan Cottage was now closed on Tuesdays). We ordered Hot Spicy Crispy Fish Filets (F4) and soup dumplings (S15). The Hot Spicy Crispy Fish Filet was very good, with a good crunch to the outside and lots of red pepper. There is no sauce on this dish (just so you know). The soup dumplings were also good, but there was a problem: they were big, and the soup spoons were small, meaning that trying to put one on the soup spoon to eat it meant that you had to be very careful or you would lose all the soup from the inside. As our free appetizer we got Sesame Cold Noodles (S9). They were actually slightly warm (as opposed to cold), and I assume what we got was a smaller size than one would actually pay $6.95 for (S9), but they were very good.

I notice they no longer have the dishes and chopsticks with their name on them (or don’t put them out at lunch).

Someone at the next table had one of the House Specials with fish which looked really good but which is clearly designed for at least two people–obviously a good option for a HO Down!

I notice they no longer have the dishes and chopsticks with their name on them (or don’t put them out at lunch).

My bad–that was Shanghai Bun that had the logo’ed items. We just went to SB today, and by the way, they now have an additional mundane Chinese restaurant menu, complete with General Tso’s and all that jazz. Not a good sign.

And, boy, do they need a vestibule in the winter!

I couldn’t agree with you more about that vestibule. WOW! That place gets chilly every time that door opens.

Not that I rely on yelp, but 4 stars and 42 ratings so far. It looks like this place is holding its own.