Sharing this video of a favorite dish at Miyako, the hot stone fried rice. I’ve also enjoyed Izakaya Wa and Izakaya Ha recently, they have great lunch specials. Bluefish on Washington and other locations has some unique items as well. I haven’t been to the venerable Kata Robata or Nobu yet, they are both very high end. And of course thanks to not do the work, we know about sushi Jin, which is awesome. I did try Uchi but did not find it terribly exceptional. However, I understand there’s a line waiting when it opens each day for happy hour due to those specials, so I’d like to try that. Any other place I should try?

As you know, I have a favorite but I’ve tried many other sushi bars around town. I too have eaten at Uchi once and Uchiko in Austin a couple of times. I think it’s great but out of my geographical sweet spot.

I would like to note that I ate at your Los Tios today and they still don’t have carnitas on the menu. Oh well. I tell you that on a Japanese cuisine thread to note that Kaneyama has apparently closed with a padlock on the door and a couple of stickers from an equipment vendor alerting the landlord that they own equipment inside. Too bad as they had been there a long time.

Walked by Aldi but didn’t venture in. It was hectic and as far as I know will still be there tomorrow.

thanks to not do the work,

How on earth did spell check get that from @NotDoobieWah. Sometimes I think it hates me, it actually changes words after I review it and press send.

The carnitas are at the Flagship location of Lost Tios. I wasn’t a fan of ramen either, but then again I’d never had a real one until they rolled into Houston. The broth is so flavorful and I love the egg. I do leave most of the ramen, same with Pho. I wonder if I can just order the broth.

I wonder if I can just order the broth

I tried to order the coctel de Cameron at Mambo’s once without the frozen, farm raised micro shrimp and the girl didn’t comprehend my Spanish or the Wifeacia’s which is the real deal. No go.

El Jardin does a nice one with good sized, albeit probably farm raised shrimp.

Did the road construction claim yet another business??? 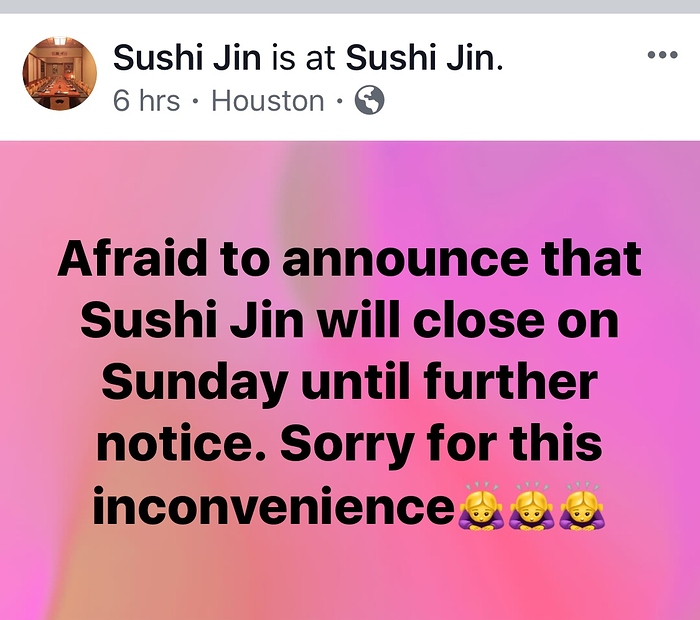 “Sorry… we still open Monday through Saturday from 11am to 10pm all day. Due to the shortage of Sushi chefs, we need to close SUNDAY BUSINESS to avoid overworked staffs. We are looking for sushi chef and try our best to reopen Sunday business as soon as possible. Again, my deep apologies for this inconvenience. Thank you

My buddy Leo works his ass off.

An inside joke on another forum I frequent is:

But what does it mean??

I’d tell you but I can’t trust you with the information plus I have no clue what it means.

But what does it mean??

It means the original wording was ambiguous and open to misinterpretation.

It’s been a year since I’ve been to Sushi Jin, so I had lunch there yesterday at the sushi bar. I ordered the sashimi bento which is stupid as I recalled once again that bentos are way too much food for me. I took some home, but sushi is best eaten at a sushi bar.

Clockwise from noon: yakitori with veggies on a stick, a tad over done and those came home; orange slices, for dessert I assume; spicy tuna roll; the always present ginger; sashimi: salmon and 2 types of tuna, and in the middle bowl next to the wasabi is another tuna I haven’t had, called Escolar which has a really different texture and had some sort of sauce on it. Lastly, at 11:00 was the potato salad I always find out of place in a Japanese place, but I ate it all!

Not pictured: soup and salad. All that for $12.

I’m on a Japanese kick, and have vistied Izikaya Hi recently and tried some ramen at the venerated Kata Robata. I loved the dining room at Kata and I’m new to ramen, but I still value the spicy miso at Ramen Jin on Westheimer @ Wilcrest over others I’ve had. 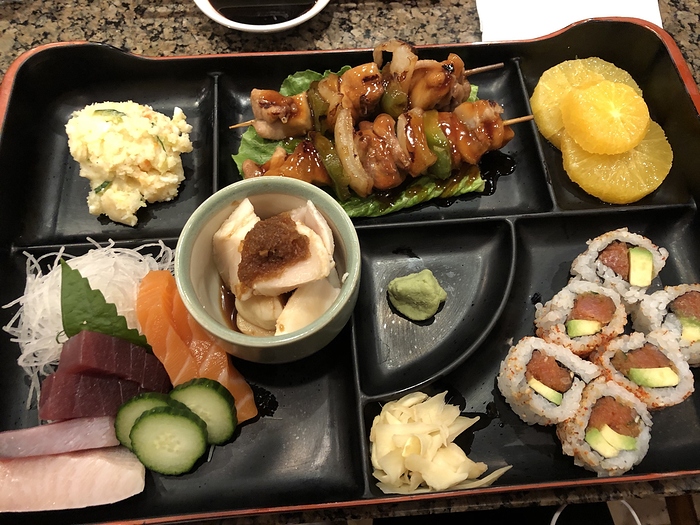 thanks to not do the work, we know about sushi Jin,

I’m sure I meant that to say NotDoobieWah, no idea why it ended up looking like that.

I was looking at a west Houston food social media site and several people recommended Ginza for sushi and said it’s been there for a very long time. I wanted sushi so I thought I’d try it. Not great. The sashimi I ordered was flavorless (tuna and salmon) and a bottle of Sonoma Cutrer that sells for $11.49 at Total Wine showed up on the bill at $44. Double retail is expected, 4X retail is not acceptable. The sashimi was also much more that Sushi Jin charges, and I had to pay $2.50 for a small bowl of sushi rice to go with it. The dining room is industrial and cold in comparison to Sushi Jin’s warm yellow interior and comfy seating. I understand rent is higher on San Felipe but I’ll stick with Sushi Jin from now on. 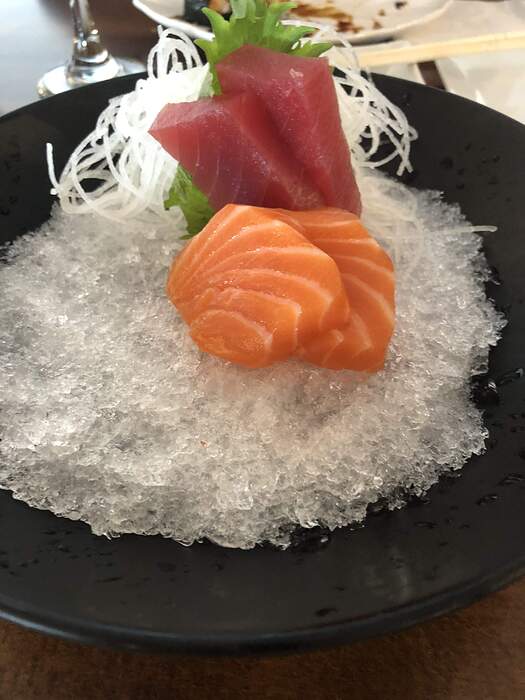 As you know, I have a favorite

NotDoobs, are you still frequenting Sushi Jin on a weekly basis? I went in at 11:45 AM today to get some of their menu to go, I was craving miso soup. No one was in there and they said I was only the second customer of the day. When I left at noonish, one customer had come in and was seated. I was surprised, since it is generally busy. I think I’m going to make plans to head over there for dinner soon to support them. They have been closed on Mondays for a while due to worker shortage.

Kuu has fantastic sushi and a good happy hour menu.