We sometimes go for lunch in the Japan Center. We usually go to Takara which we really like, but would like to try some others in the area. Over the weekend, we ate at Mifune in its newer location. The menu seemed kind if limited, and the food was okay, not great. Any suggestions? I assume that some of the places are aimed more at tourists, which is fine, but I’d like one that has good food as well. Thanks.

What kind of Japanese food? I like Marufuku Ramen (long line though) and Udon Mugizo (not Marugame Udon). I thought

I like the conveyor belt sushi place, Tenroku. That’s the one upstairs next to Kinokuniya bookstore. I think it’s better than the one downstairs. I also think the bullet train sushi place, Hikari, is not bad. Dying to try SaSa for its mystery boxes - have heard from friends it’s very good. If you like udon, try Udon Mugizo. (I’m not that crazy about udon.) Marugame is a huge chain and is kind of sloppy in how they prepare things.

My family went to the AYCE YakiniQ recently and didn’t like it.

Another place I mean to go is Ichi Sando. https://www.sfchronicle.com/food/article/Ichi-Sando-brings-highly-Instagrammable-Japanese-13872470.php

+1 on Marufuku Ramen, the line there is often long but you can also put yourself on the waiting list through the yelp app.

Also +1 on Tenroku for some quick sushi. It’s not especially high quality sushi as might be expected from a conveyor belt place but I like it. It scratches the sushi itch and is reasonably priced. I believe the owner(s) of Tenroku have also taken over the former Isobune boat sushi space as well as I have seen some of the same staff there. That space is called Izumi Kaiten Sushi now.

For higher quality and more $$$ sushi, I like An which replaced Ino Sushi a few years ago, though I haven’t been recently

Another place I mean to go is Ichi Sando. https://www.sfchronicle.com/food/article/Ichi-Sando-brings-highly-Instagrammable-Japanese-13872470.php

I tried an egg sandwich from Ichi a few months ago and found it to be too sweet for my taste, although I had a pretty bad headache that day so that may have colored my impressions. It was pretty nice looking though. 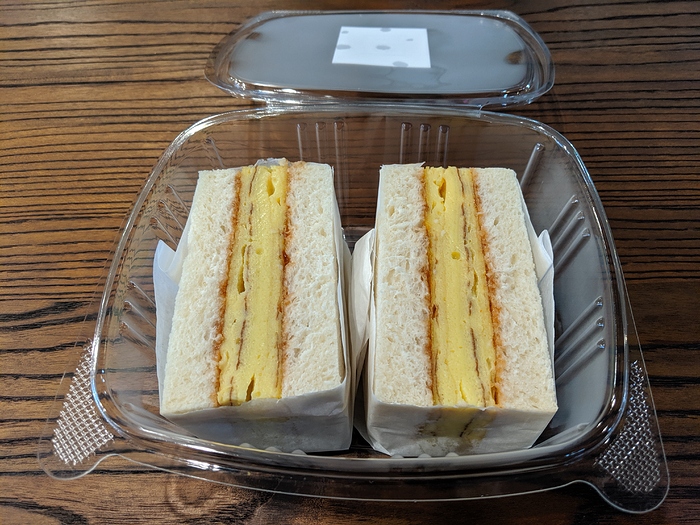 The OP implied that she is mainly going for lunch. An is dinner-only.

On the Bridge can be fun for yoshoku cooking
I enjoyed my one visit to Waraku for ramen. Still haven’t tried Marufuku (you can avoid much of the line if you use Yelp to put your name down ahead of time) or Hinodeya.
Suzu appears to still be popular despite belonging to the pre-tokotsu broth generation of ramen-ya.

Izumi Sushi/Tenroku can be decent options if you’re sticking to high-volume items that aren’t spending any time going around and around the conveyor belt. The “promotion” that Tenroku loudly advertised (a whole tray of uni was like $15) was unavailable 90% of the time. The one or two times we managed to successfully order it, it wasn’t good.

I want to try Ichi Sando at some point but find the idea of charging $9-15 for a &%@$ing grab-and-go egg sandwich infuriating.

I was about to mention this shop too, but forgot its name. Yes, it is a nice Japanese omelet sandwich shop. Not much selection, but high quality food. I guess we have different experience. It is a little sweet, but I am ok.

Not a restaurant exactly, but the grocery store Super Mira in that area has pretty good lunch boxes for a reasonable price. I do like their oyako-don specifically. Their katsu is quite good also, though i think the curry is good, not great

They also have sushi boxes and other to-go items to eat. They sometime have saba sushi, which i think they make it in the kyoto-way, which is great, but I dont see that too often. The spam musubi is another winner.

Super Mira also has a bakery counter inside - Yasukochi’s Sweet Stop - that has a good coffee crunch cake. Also for dessert - across from Super Mira, the 100+ year old Benkyodo has some delicious mochi.

We also go to Nijiya Market for prepared foods.

Thanks for all your suggestions. I’m not a ramen fan. We usually get things like katsu, tekka donburi, tempura, etc. Are any of the places in the “Restaurant Row” (where Benihana is) decent or are they more touristy?

I personally don’t really like any of those places near Benihana. YMMV.

My foodie coworker and I have discussed. She really likes Daeho. I’m excited to try it, as well as SaSa.

Actually yes, I liked it though I didn’t really do much of the ordering. I went there when it was still the soft opening though. 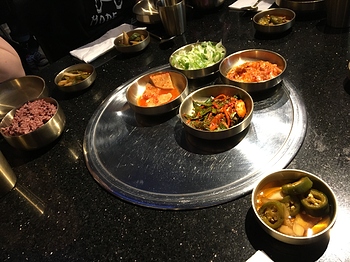 Here’s the banchan. Some kimchi, slightly spicy chives, and if I recall correctly radish (its been two months and I didn’t really take notes…). 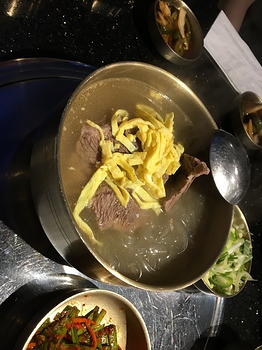 Got the beef rib soup and thought the clear broth was quite good. I enjoyed the noodles as well, had a good texture. 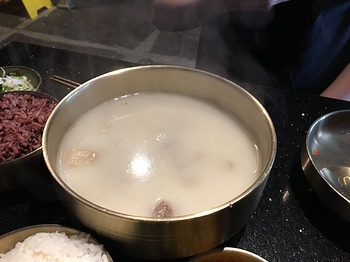 I think this was the brisket soup (sorry forgot notes :/) but this was more on the plainer end that I seasoned with the provided salt and pepper. I thought it had a lot of collagen so that was quite nice. 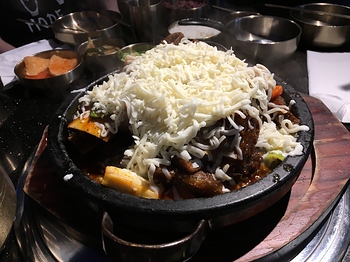 Ended our meal with the short ribs with cheese. Here’s the before… 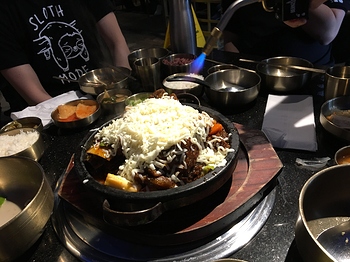 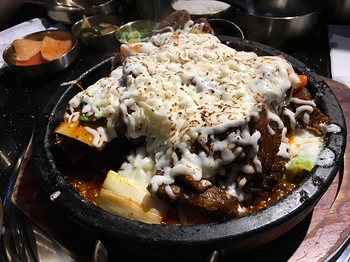 And finally the finished product.

I quite liked it as it had rice cake in the middle underneath all the ribs and cheese. The sauce reminded me a little of bbq, but… not quite. I do wonder if a searzall would be better than the cheese hitting the flames directly but still quite melty.

Oh, and just a few other places I’ve eaten at this year at Japantown:

I enjoyed Matcha Cafe Maiko for their matcha desserts. 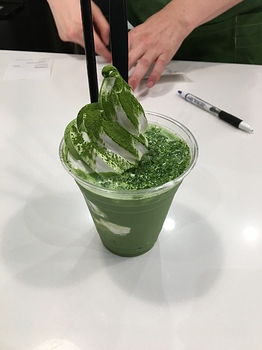 This was one of their matcha tea lattes with a vanilla softserve base. Not too sweet, with a good matcha taste. 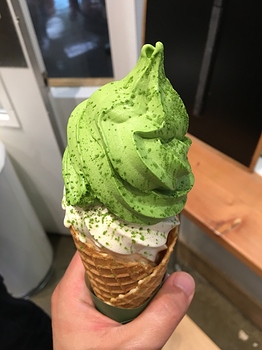 Next time I was around I tried a mix of the Kinako (seasonal flavor of roasted soy bean flour) and matcha. The kinako is on the milder side but had a nice nutty flavor. I’d say see if they can swap it around so matcha is on the bottom.

Next snack place is right across from Maiko. 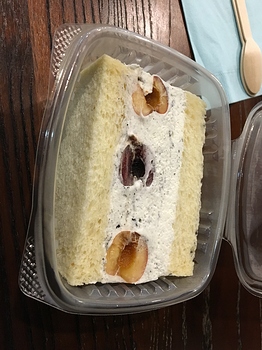 I tried their spring/early summer special of rainier cherries fruit sando with black sesame cream. Well… slightly misnamed as I had random bing cherries as well but I didn’t think the cherries went that well with the sesame cream. Fairly light, with soft white bread, with a good heaping of cream.

Next up is On the Bridge restaurant which I remember walking by for the longest time but never going inside. Decided to give that a shot. 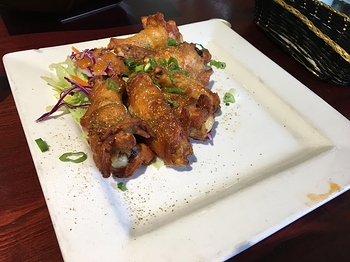 Got some fried chicken wings with sansho spices. Nice and crispy and the sansho adds a nice heat. 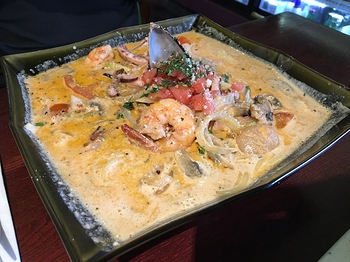 Tried a little bit of the seafood pasta as well. I would like a little thicker sauce but I found it light and enjoyable.

I found on the bridge to be a nice charming retreat away from the bustling crowds.

Friend recommended me Marufuku ramen and I decided to check them out. Thought I was smart to just arrive right when they opened but uhm… bad idea haha. There was already a line as I approached and just signed up for the wait list. About an hourish later, I was able to sit down. 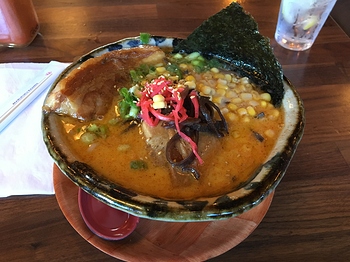 I initially wanted to try their Chicken paitan dx but they were long sold out by the time I got there. Went with the Hakata tonkotsu DX which included a thick braised pork belly on top of the chashu, corn, and nori seaweed. I opted for medium spiciness and I thought the dish was great. Nice savory broth with a kick, and the thinner noodles were able to hold onto the pork broth when eating and slurping. The chashu was nicely marinated but I still think the pork belly was just better. Only thing I’m not certain on was the seasoned egg. The yolk was soft and gooey but I really couldn’t detect the seasoned portion of the egg; I expected a hint of mirin but just seemed like a soft boiled egg.

Anywho, as @Mr_Happy mentioned, just put yourself on the waitlist if you’re going there a little later or show up much earlier than me… 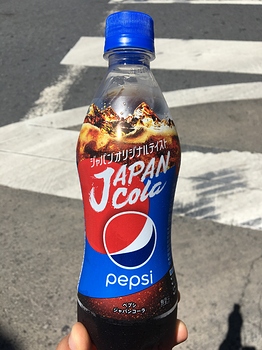