An area that is never covered here on HO! Originally posted on my blog.

We were really in an unfamiliar area in Flemington two days ago. Having been in the area for a Memorial Day barbecue at Round Valley Reservoir, we made a mini vacation out of it by staying overnight near New Hope. We wanted to grab breakfast on the way back home. I’ve enjoyed the nearby Country Griddle in the past, but wanted to try something new. A quick search left us with limited breakfast places, and the J.S. Shaker Cafe popped up with decent reviews. Normally, between Justin and myself, he is the harsher critic. I tend to be a lot more lenient. With this experience, though, you will find that he wanted to give them a higher score than what I will end up awarding. In addition, I really struggled to write this intro, because unfortunately, there were no outstanding attributes or musings with which to lead. 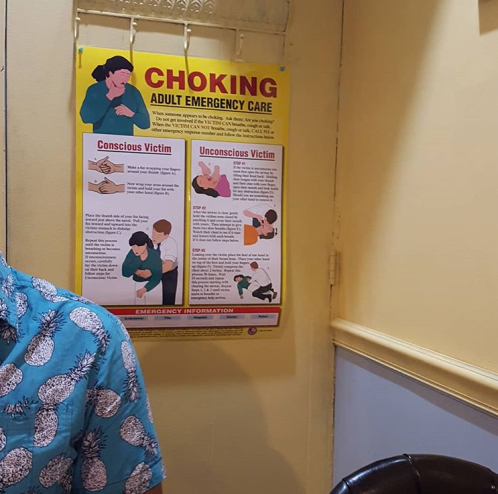 I knew I was getting chocolate chip pancakes before I even walked in. This meant I had ample time to look around and observe the scenery. The interior of this cafe is a quirky one, if not borderline odd. I cannot yet say if this is in a good or bad way. The dining area is quite large and the tables are very much spaced out. This is something which I appreciate—not being seated right on top of other customers. But what they gained with this they lost with decor. The paintings and tchotchkes were overly kitschy. I felt like I was dining inside of a church thrift shop. On the wall behind Justin was a poster with instructions explaining how to save someone from choking to death.

Our waitress was friendly and attentive, coming by several times for coffee refills. I ordered a short stack of chocolate chip pancakes with a side of bacon while Justin had the “Elvis” stuffed french toast (peanut butter, bacon, banana slices). We shared a side of home fries. The food arrived in about 15 minutes. He enjoyed his meal. There was so much peanut butter inside that he could barely open his mouth to chew. I tried a fork-full and did not think it tasted much like anything. The homefries were a little too clunky for my liking, but they warmed up on me and I ended up enjoying them by the end of the meal.

As for my pancakes, they came in a plate that must have belonged to the cook’s grandmother, but looked perfect. However they were too dense and kind of rubbery. I had a hard time cutting into them. This is a shame, because the aroma coming off of them was amazing, and they were loaded with chocolate chips. I ate a little less than one and a half. They were enormous and filling—I just wish they were a little more fluffy. The bacon was so thoroughly cooked that the slices had shriveled up into about the size of a French Fry. I like crispy bacon (and this was—it crackled like a potato chip), but damn, the pig was already dead! One other complaint: how about giving real butter instead of a pad of that fake Country Crock crap? 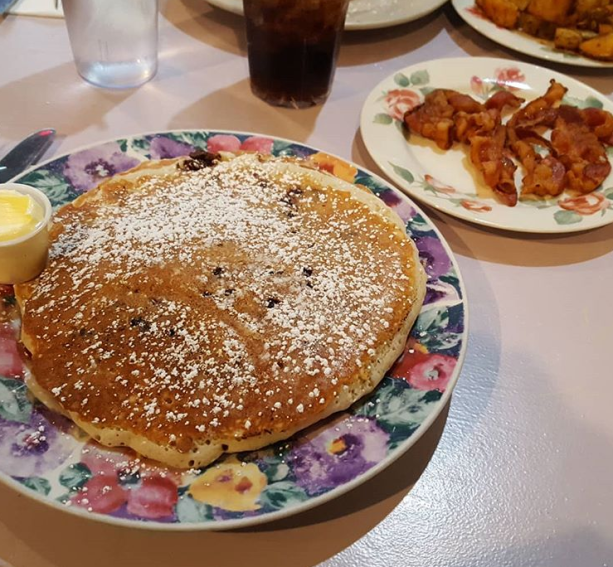 The bill came and it was $22. I put my card in the sleeve and went to use the restroom before we hit the road. On my way back to the table, the waitress got my attention and I walked over to the counter. She said she had made a mistake when adding it up and that it was actually $25. I guess that was fine, although when looking at the new receipt I could not really find anything different.

Coming up with a rating for this was as difficult as writing the intro. Nothing was bad, but nothing was particularly good either. I did not dread going to the J.S. Shaker Cafe, but I certainly would not go back. There just was not enough here to justify a return visit if ever needing to have breakfast in this area again (which in itself is unlikely). So, I will award them with a 2.5 out of 5 stars —right down the middle, as average as average can be. Justin had thought it was worthy of a 3, but I do not see where. He must have enjoyed his French Toast a lot more than me. I thought this place had a lot of potential, but I cannot help but feel let down.

Oh boy. Yes, the shaker cafe. Glad to hear it hasn’t changed an inch in the 10+ years I’ve eaten there. I grew up out there and one of my first “Real” jobs was working for an accountant up the street. Next time you are in hunterdon country go directly to the lovin oven in frenchtown. Yes it is at a good 20 minutes but it is delicious. Kind of crunchy but with so much love and fresh ingredients.

I’ve been to Frenchtown several times and do not remember seeing a place with that name. Is it in the main hub or on the outskirts? I’ve dined at the National Hotel and Cocina Del Sol, both excellent experiences.

Outskirts. If you drive out of Frenchtown South heading in the lamberville direction, then you will pass it. They used to be in a teeny old house with an even teenier kitchen one town north. I know the owner from working together years ago.

“Oh boy. Yes, the shaker cafe. Glad to hear it hasn’t changed an inch in the 10+ years I’ve eaten there.”

This place has actually changed a lot. The original Shaker Cafe was a local hangout that could always be counted on for great breakfasts and lunches. As I recall, they also served dinner a few nights a week. In recent years the restaurant has changed hands at least twice and the food quality has dropped enormously. If you went to the old establishment it was nearly always full at lunchtime, even on a weekday. Now, there might be four or five tables occupied.

The Lovin’ Oven should not be missed. It is our go to place for Sunday brunch and the occasional dinner during the week. Elizabeth Gilbert, of ‘Eat Pray Love’ fame, used to have a store next door but she has been gone for a couple of years.

Thanks for the clarifications! I was basing my comment mostly off the tchotchkes ha! Sounds like that has remained through the years.

You must live out in that neck of the woods? I grew up in Kingwood a ahem few years ago…

Thanks! I will check it out if I am ever out there around breakfast-time.

Breakfast and beyond! They do lunch and dinner a few nights a week. 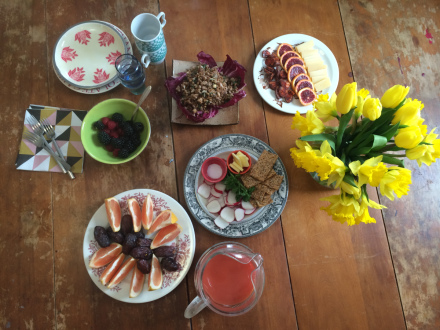