Hello All.
I will be doing some walking in the Peak District first week in Jan. I would like recs for both Buxton & Bakewell. Nothing fancy , pubs with good food ( somewhere that does a very good steak & kidney pudding would be a bonus) and of course good beers will be fine. I won’t have transport so they will need to be walking distance from the town centres. Also any recs for a lunch stop of between Buxton & Bakewell would be appreciated.
Thanks.

Good luck with this one, mate.

Unfortunately, whilst both places are sort of on my doorstep, they’re not really on my radar for meals. We visit the farmers market at Bakewell occasionally and the caff at the auction centre (where the market is held) does a very decent “Full English” - not been there at lunchtime but I’m sure it’d be OK. I used to visit Buxton a few times a year and I’m sorry to say that it’s a food desert.

The Manners is a boozer in Bakewell and whilst it won’t do you the pudding, I see the menu refers to a steak and unicorn suet crust pie, which may be near enough. This is a steak and ale pie - the unicorn referring to Robinson’s branding (Robbie’s being a Stockport real ale brewery asnd my bitter of choice back in the distant past when I was a drinker).

Sorry not to be more help

Be aware that the centre of Bakewell is tiny and so food choices are not great. I saw a couple of restaurants and a cafe where I ate Bakewell pudding with custard.

The steak and ale pie mentioned by Harters sounds good. Wish I had time to eat it.

Took the bus from Sheffield to Bakewell to visit Thornbridge brewery and had to be on time to catch the bus back. I enjoy Buxton beers. Maybe I’ll make it to Buxton one day.

The countryside in this area is beautiful! So many sheep and lamb. Love the UK countryside!

A 3 mile amble from Bakewell would bring you to the Monsal Head. Stunning views and a decent pint (and they do food).

I’ve done some research and John @Harters is right Buxton does appear a food desert. However the Buxton Brewery tap house looks good for beers so I’ll console myself with those and have one of their burgers.

Thanks John. I’m walking the Monsal Trail from Buxton to Bakewell and this is near the end and looks like an excellent lunch stop. The Manners also looks pretty good, just have to try and not have pie at both places.

The Trail passes through some good scenery.

You’ll know it runs along the route of an old railway line, so a good reuse. The Middlewood Way is a similar reuse nearer to me (running from Macclesfield to Marple) - if ever you decide to walk that one, I can come up with food suggestions.

Fingers crossed that the weather is kind to you

Any report back, mate?

Should have reported back earlier but in truth not much to report.

I ate at the Buxton Brewery Tap House. I had a passable burger , somewhat overcooked but quite tasty. I had it with macaroni cheese rather than chips, this was pretty good. I went mainly for the beers. The standout was the Guatemalan Coffee Extra Porter. One of the best examples of a porter I’ve.

I did get off the walk and go up to the Monsal Head for lunch. I popped my head in and saw a very pedestrian beer selection. I didn’t fancy that much of the menu and the bar was a bit dreary so I decided to push on and have lunch at The Manners. I just made it before they stopped serving for lunch. Decided on calves liver & mash. They were very busy so they cleared the table were the menus were. I grabbed a beer and waited, got another beer and waited some more. After nearly an hour I asked after my food. They’d forgotten to put the order in. Fair play to the chef who must have been doing the clear down he got it out to me in 10 minutes. Liver was nicely pink inside (though slightly burnt here and there on the edges) soft creamy mash and a very nice onion gravy. They also comped me another beer so they managed it all pretty well.

For dinner I went to Raja’s Indian Restaurant. It’s a big standard curry house but I went to Uni in neigbouring Staffordshire and so went for a balti for old times sake. I wasn’t expecting much but even the low bar I had set it was pretty disappointing. Quite bland and lacked the heat level of baltis of my youth.

All was not lost though. The best things I ate were in Matlock where I got the train to/from London. I came across a proper old school butchers on Bank Road- Hambridges. Not only did they sell haslet (which I remember very fondly growing up ) but they had tubs of lard and dripping. I bought a bacon cob with lots of their own thick sliced bacon , it was very good bacon. Whilst paying for it at the counter I spied a pork pie, made by themselves using Gloucester Old Spot. Well it would’ve been rude not to. A very good pork pie, nice moist meat, the right amount of jelly and thin crisp pastry. 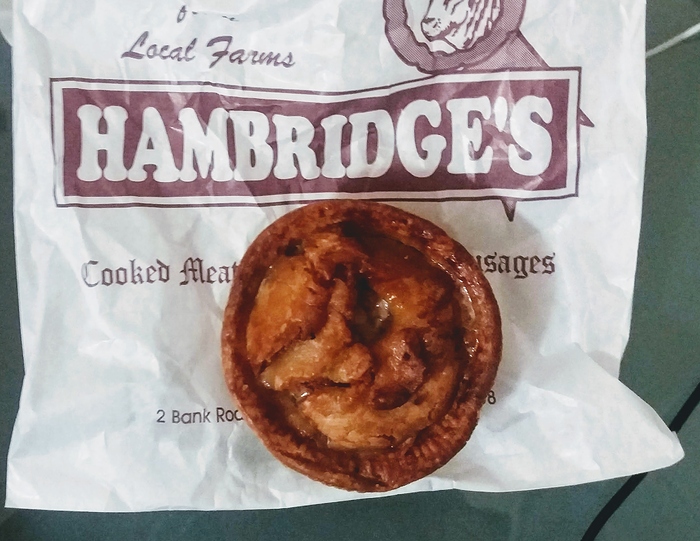 Hambridges. Not only did they sell haslet

You just confirm this is a really disappointing food area.

Hambridges ring a bell - I have it in mind they used to sell at Bakewell farmers market. Really good peppery haslet and very decent sausages. It’s 2 or 3 years since I last saw them there (which is why I’m not 100% on the name).