I am casting a wide net here for suggestions about where to find really tasty knishes for takeout. Willing to drive but mostly searching for flavorful fillings (potato, kasha, onion, etc), and flaky outer crust. If you’ve ever eaten a swell knish (think Second Avenue Deli or Katz’s), then you know what I’m talking about. I just sent a beloved family friend in New Hampshire a half-dozen from Yonah Schimmel’s and I could order them there also but prefer freshly made closer to home. All recommendations considered, and especially from Onionites who know whereof they speak. Happy Hanukkah. 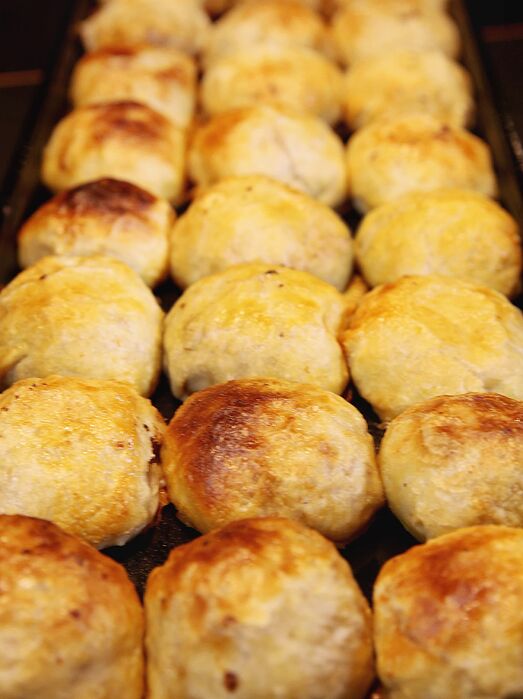 I love knishes so I will be following this thread. We’re going to NYC this holiday season so I’m looking forward to enjoying knishes there. Even mediocre NY versions are still good.

I like the knishes from Michael’s Deli in Coolidge Corner, the closest I’ve found to NYC-style deli in the area. They make an assortment of seasonal/specialty flavors but my favorite remains the regular potato.

Michael’s is also my favorite for bialys (sourced from Montreal) and pastrami (sourced from NYC). Or at least they were; it’s been a while since my last visit. Thanks for the reminder that I need to get back there.

You might want to try Larry Levine’s Deli in Peabody. It’s been a while since I’ve been but I believe they did last I was there.

It’s been a while but I liked the potato knishes I had at Zaftig’s (Natick location, but also in Brookline). Their menu also lists meat or broccoli/cheddar options.

A good knish is rare. Yonah Schimmel was awful (and if you konw of a good NYC knish, I would be game). Michael’s Deli near Coolidge Corner on Harvard isn’t bad and many flavor. they ship in their meats from NYC and not sure if they make their knishes in house but think so as a few of thenm seem to use the ends of their deli meats.

Barrys Village Deli in the Auburndale section of Newton have good knishes as well as deli meats. An old time Jewish deli that’s been around for at least 50 years.

There’s not a ton of good Jewish deli options in the greater Boston area, or in Boston itself so you’ll be hard-pressed to find lots of options here but to echo everyone else, Michael’s Deli’s in Coolidge Corner is probably your best bet knishes. Barry’s Village deli also has them but I don’t remember them being as good as the ones at Michael’s