Someone should try the same thing with their turkey, ham, roast beef etc. etc…
A friend of mine who worked for awhile at a popular NJ Gas Station / Deli combo, took a video of their “turkey” which was left at room temperature too long. What I can only assume was the gelatin which molded the meat scraps together started to break down, the “turkey” became like a paste which you could just mush off with your fingers. It was truly gross. 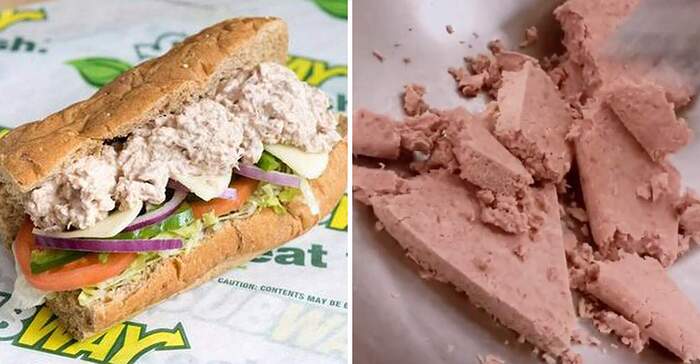 Lab Analysis Fails To Identify Any Tuna In Subway's Sandwiches – And People...

A shocking lab analysis of tuna at sandwich chain Subway failed to identify any tuna DNA, according to the New York Times. The paper, which commissioned the study off the back of several high-profile claims about Subway's signature seafood...

That’s a VERY misleading article which does a pretty thorough job of misinterpreting the NYT story. Here’s some relevant info (from the NYT story):

To be fair, when Inside Edition sent samples from three Subway locations in Queens out for testing earlier this year, the lab found that the specimens were, indeed, tuna.

Even the plaintiffs have softened their original claims. In a new filing from June, their complaints centered not on whether Subway’s tuna was tuna at all, but whether it was “100% sustainably caught skipjack and yellowfin tuna.”

With all testing, there are major caveats to consider. Once tuna has been cooked, its DNA becomes denatured — meaning that the fish’s characteristic properties have likely been destroyed, making it difficult, if not impossible, to identify.

All of the people I spoke with also questioned why Subway would swap out its tuna.

“I don’t think a sandwich place would intentionally mislabel,” Mr. Rudie from Catalina Offshore Products said. “They’re buying a can of tuna that says ‘tuna.’ If there’s any fraud in this case, it happened at the cannery.”

What I am surprised about is that the NYT even bothered to print the story. I read it and that was 10 minutes of my life down the drain for no return. Now that the NYT story exists, you shouldn’t be surprised by all the misleading stories that follow it. Why would anyone need to replace canned crappy tuna with something else? Cat food costs more than some of the tuna I see. Nothing to see here people, move along. Click bait.

I’ve subscribed to the NY Times for over 20 years. Stories like this and their whole bias is making me wonder why I continue to pay. Only thing worthwhile is their cooking app so I can see the recipes.

send any canned tuna off the shelf to a lab.
they’ll not find any DNA enhance-able trace.

stupid is as stupid does, and you can’t fix stupid.

One thing I thought questionable in the NYT article was the reference to Sage, the California Subway manager. Usually in instances like this a fake name will be put in quote marks to protect their identity. How many CA Subway managers could there be named Sage. If true, and that is his real name, he’s probably out of a job at this point. That part lacks credibility. To me anyway.

“Aside from all of the fishy lab results, there’s another portion of the NYT piece that should make make diners’ ears perk up: Carmel[ also talked with different Subway sandwich artists, including a manager of a shop in California named Sage. The two went over what happens to the tuna after it arrives at the shop and general procedure for storage and maintenance, including the little detail that the prepped tuna can stay on the refrigerated sandwich bar for up to 72 hours. If that sounds like a long time for canned tuna to sit in a hopefully at-temperature fridge, you’re not alone. Even the manager Sage says, “We all agree—all of us that work there—it gets kind of gross.” Do what you will with this information.”

One reason I skip so many written for profit articles. For starters, I can’t imagine buying a tuna sandwich away from home. Same egg salad. These are my standards. That said, Subway was pre-pandemic one of our favorite stops en route to city from country. Both italian deli meats and ham always tasted correct. Veg accompaniments were crisp and fresh. But it is obvious that quality will vary location to location and reasonably across various times of day.

If true, and that is his real name, he’s probably out of a job at this point. That part lacks credibility

Do you think Sage (I assumed this was a female person) is invented?

Your guess is as good as mine.

I don’t understand how or why you are presuming this was a ‘guess’. I have no reason to doubt the reportage here. Sage asked that her full name not be used and said nothing not confirmed by an official Subway spokesperson in the following paras.

It can rot totally but DNA not there? I’m not a scientist but I think DNA will be there as long as it(whatever left of the meat) exists, right?

DNA testing is looking for specific sequences of nucleobases, once normal DNA reaches 95° C the chains of nucleobases break apart so those sequences will no longer exist in the sample and any DNA test performed will give a negative result. Some pathogens produce spores which are resistant to heat destruction so canned goods are usually processed under pressure to a temperature of at least 121° C.

It can rot totally but DNA not there? I’m not a scientist but I think DNA will be there as long as it(whatever left of the meat) exists, right?

Do you remember high school biology? All DNA is comprised of 4 amino acids. Its the particular order in which that DNA is linked in that double spiral model that is a prop in nearly every science movie that is used to determine what the source of the DNA was. If you take that model and drop it on the floor, the sequence is destroyed. All the pieces are there, but you no longer know the order and hence can’t tell what it came from. That is the impact of cooking.

Mine is not really a guess. I know enough about journalism, and I know enough journalists, to know that making up a source will get you not only fired but blacklisted. Of course, this applies only to reputable news organizations, which the NYT is, despite what the - let’s just call them “differently-intelligenced” - like to squawk.

There have been several high-profile instances in which the NYT did not live up to its own standards. Jason Blair is one example; Judith Miller is another. But these are notable not only for their rarity but for the very public self-flagellation the NYT did once those shenanigans came to light.

I have my ups and downs with Subway. This story doesn’t pass the sniff test.

NYT is behind a paywall I won’t breach and certainly won’t pay for. See https://www.city-journal.org/journalism-advocacy-over-reporting - there is no journalism left at NYT, only advocacy for a narrative.

I remember a NYT article back in 1980 about a ship “accidentally slipping into gear.” It was a steam ship. No gears. Much more interesting failure mode. Pretty much every story with any technical data in it that I know about published by NYT has been rife with error. Not a credible source. Yes, yes, I know, “the nations newspaper.” Horse pucky.

Let’s go back to the science. Look at what happens to food product when you can it. Home canning here https://nchfp.uga.edu/how/can_05/tuna.html, commercial canning even more rigorous. Amino acids and thus DNA broken down.

Let’s not lose sight of the fact that the “lab” has not been identified. How is anyone to assess credibility without footnotes? Fail.

I’m happy to take up a collection to send a batch of Starkist and Bumble Bee tuna out for DNA testing and see what happens. Who is in? You don’t have to be a fan of Subway to stick up for anyone that is being railroaded.

Let’s not lose sight of the fact that the “lab” has not been identified. How is anyone to assess credibility without footnotes? Fail.

This is why: “Eventually, I found myself on the phone with a spokesman for a lab that specializes in fish testing. He agreed to test the tuna but asked that the lab not be named in this article, as he did not want to jeopardize any opportunities to work directly with America’s largest sandwich chain.”

I don’t know why you keep asking for “footnotes.” Don’t you mean citations? Web pages don’t really have feet.

I see what you did, there.

I don’t know why you keep asking for “footnotes.”

Footnotes are citations. I’m over 60 and that’s the vocabulary in my head. The point is that statements aren’t facts and should be substantiated. Even Wikipedia gets that.

I’m over 60 and that’s the vocabulary in my head.

Then we’re fewer than 10 years apart, and I manage to change my vocabulary every so often. But you do you!