Quick update for old Chowhounders for this old favourite. The Indonesian Mini-mart on Charing Cross Rd, seems to have a new home in Bermondsey as Chinatown redevelops:

I’m not doing a very good job of writing up everywhere I’ve eaten recently; there’s just not enough time in the day and I’ve had to prioritise my writing a little. Was the r…

I have not lived in London for more than 10 years, but I have always found the relatively affordable prices in Chinatown to be somewhat curious given its central location and walking distance to high rent areas. With the redevelopment, and likely gentrification as a result, I am not hopeful that small mom & pop shops and eateries that add to the quirkiness and diversity can survive, at least in Chinatown.

Chinatown itself grew from what was Little Italy. Its central, downtown location in one of the world’s most expensive cities have always befuddled me. My go-to place in Chinatown had always been the Kowloon Bakery for its baked “char-siu” buns - I used to lug back bagfuls of them to Singapore even 25 years ago. We couldn’t find anything that good in Singapore or HK then, as now.

Never been a big fan of the rustic Toishan cuisine in Chinatown’s restaurants back then. These days, North-eastern Chinese seems to be the trend.

North-eastern is everywhere in Chinatown at the moment. Peter - did you try Baiwei last time you were here? Interested to know your thoughts.

Also I’ve been to Kowloon Bakery and not been blown away, but a good chance I’m ordering the wrong thing! What exactly should I be asking for?

I see your char-siu buns and raise you honey buns from Ho’s Bakery in Manchester’s small, but perfectly formed, Chinatown.

I’m pretty certain it’s been the baked char sui buns which is where the disappointments coming from. Hoping there might be a secret word missing…

The baked “char siu” buns used to be moister and softer in the old days, and stayed that way even after we bring them back to Singapore on a 13-hour flight journey. Back in the 1980s & early 90s when I was with Singapore Airlines, any of us flying to London will have to pack back at least 50 of these buns for our office colleagues - they were better than anything we can get in Singapore/Hong Kong!

The standards fluctuate these days, but you can still get the “old” taste/texture if you’re there first thing in the morning when the freshly-baked buns come out hot from the oven.

An odd thing happened to me the last time I went to Kowloon Bakery. When I spoke in Cantonese to the servers in there, they all tittered - apparently because these days, Chinatown is filled mainly with Mainland Chinese who only spoke Mandarin, and could not understand Cantonese. So, I switched to Mandarin to communicate with them. I gather second- or third-generation Chinese migrants to the UK have moved out to the suburbs, whilst Chinatown has been taken over my recent Mainland Chinese arrivals, mainly those from the poorer North-east provinces.

In the old days, Cantonese is the lingua franca in Chinatown - and we can even tell who’re the British-born Chinese since their Cantonese has a “British lilt” which we could detect immediately. I remembered having dim sum at Harbour City on Gerrard Street back in 1994 - it was a noisy Sunday lunch-hour, but above the din, I could recognize the women on one table next to us who were speaking Cantonese with “London” accents, whereas the table on the other side of us were Hongkong-born Chinese with their distinct HK accent.

I’d not tried Baiwei yet, but will do so when I come to London towards the end of the year.

It’s interesting how the style of these buns is also quite regional. In Australia, I found they tend to have much lighter, fluffier doughs than the UK does. However these lighter doughs can’t support the same density of fillings, so they tend to skimp a bit on the insides.

Because of the SE Asian influence in Australia, they often also have buns with fillings more from that region too (taro, pandan, etc) which aren’t as common here.

I always having a longing for a particular type of bun I get in Oz that you just can’t get here. Really soft and delicate bread, filled with an insanely creamy and silky purple taro filling. It’s almost like a doughnut.

By the way klyeoh, I just discovered your super-comprehensive posts on the SE Asia board. Thank you so much, I’m literally drooling as I make my way through them. So jealous!

Give me a shout when you’re back in London, and we can go to bai wei. It’s pretty good food and a great venue for a group meal. And it’s been a while!

Sure thing, Dean. Hoping to come by early-Dec.

Hope to see you this time, June! You were missed at last year’s Chowdown.

Date stamped at 10.20 off the hot racks from Kowloon Bakery. Still a bit sweet for me! 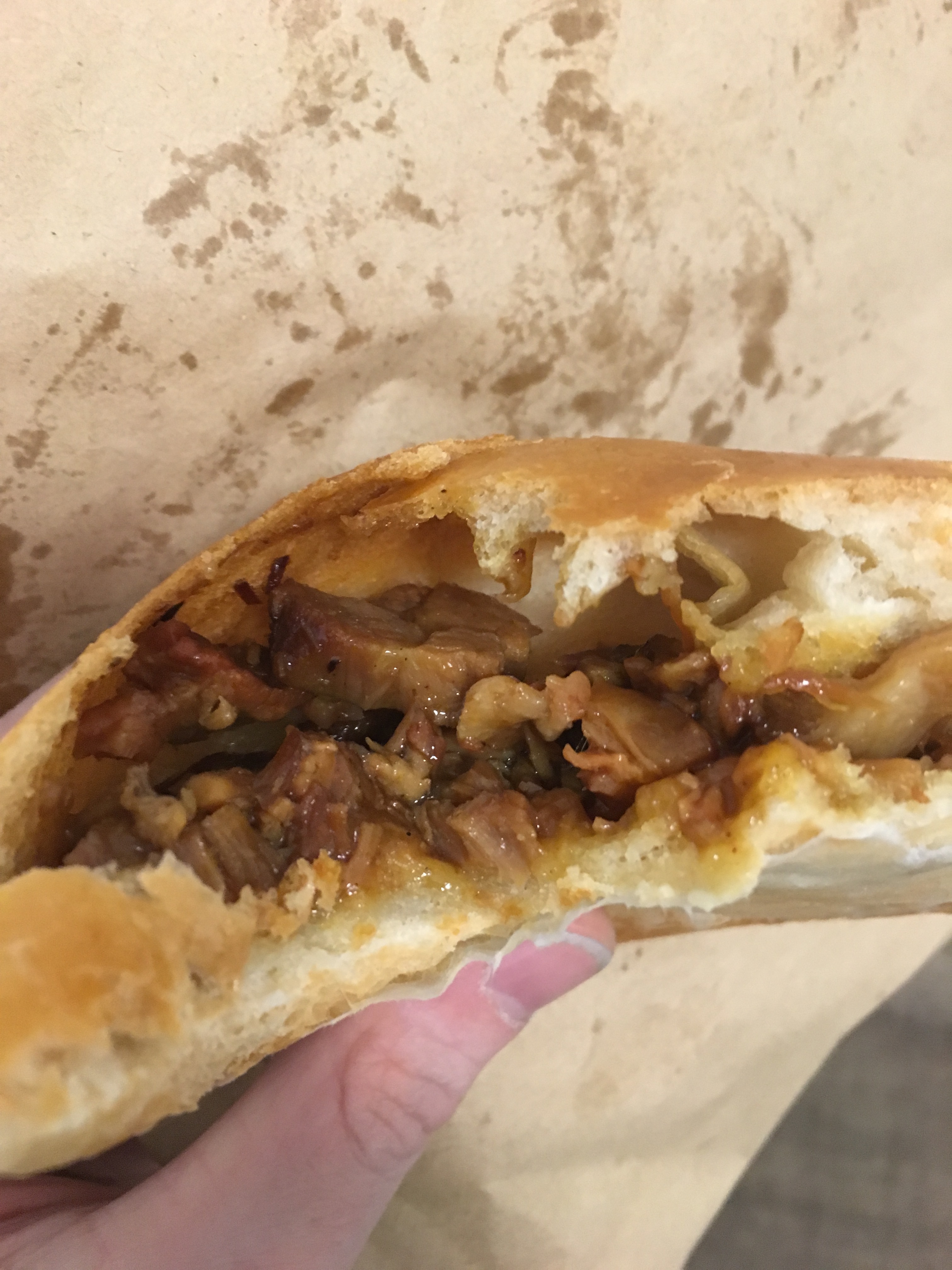 Admittedly, the filling did look a bit different from what I’d remembered it to be!
The Cantonese traditionally add maltose to the BBQ pork to caramelise & sweeten it. It’s almost akin to candied pork