Ideas needed for pasta without tomato sauce, cream sauce, or a lot of herbs

Pasta is not hard to boil - it would be infinitely simpler if you cooked the pasta plain and dressed it separately. Solves the one likes tomato sauce, one doesn’t, and adults don’t need to eat tiny kid palate pasta.

That’s it. Veggies are on the side, roasted if it’s part of the broader menu, or steamed if the adult meal is different, or even salad veggies (cucumber, cherry tomatoes, carrots) raw - whatever they eat.

Cook normally for you and your wife with all the sauce and flavours you want. Give the kids a version with plain olive oil or with butter. Maybe they will start to get interested as they are now excluded.

Once I was serving bbq eggplant for lunch, the kid was around 7 yrs old, he ate it instantly without waiting for the meat to come. The mother was away and came 2 minutes later, she didn’t know the kid was served. She said that I shouldn’t be bothered with eggplant, he would never eat that. I told her, he ate it already. She was surprised without words.

Why the kid doesn’t like tomato sauce, is it too acid? Or the texture of paste? Maybe you should add less sauce? Too overwhelming the taste for them? Put less herbs for them.

I wouldn’t suggest soy sauce or go Asian, in this case, cook them Asian noodles, what a waste to do that to good Italian pasta!

I love an asparagus sauce - bunch of asparagus roughly chopped, boil in a bit of water and salt until softer than you’d eat it plain, buzz in a food processor and combine with about a stick of butter, little lemon juice if you like. Enough for a pound of pasta. Can top with any grilled protein if you like (chicken, steak, fish, shrimp). It is green but not herb driven - so may get mixed mileage out of that.

This somewhat reminds me of a pasta that I used to cook- haricot vert, asparagus and squash cut 2" and then with pesto and pinenuts. In season, it was so good, but it too fell into dormancy once the dishes start getting untouched.

Tried that too. We have a jar of tapenade at home. Recently enjoyed mixing some pasta and the tapenade together. They too complained. What’s odd is that they’d eat whole olives nonstop, so maybe instead of olive, garlic and roasted pepper in tapenade form, i’d make them whole instead.

Do they like corn? Puree with some liquid from the tin to moisten/loosen the sauce. One could use any veg of choice, really. Without any sauce I rather like olive oil, garlic, breadcrumbs and (kalamata) olives.

I recently had a dish at an izakaya where they made a wasanbon sauce with corn. Complex tasting sauce that’s a little smoky. If I am able to make something like that at least I’d enjoy the pasta dish very much.

Nigella Lawson has a recipe for squid with white beans and broken noodles, which sounds terrible but is actually really good.

I am trying to imagine this recipe in my head- what does breaking the noodle do?

She explains in the recipe I linked to: "To create the kind of random pasta shapes that seem so natural here, I smash twisty egg noodles a bit with a rolling pin, putting them in a paper or plastic bag first to keep them from flying all over. "

Also, breaking the noodles means you can eat them with a spoon.

Whenever we go to the fancy cheese shop, we also buy the super expensive pasta they sell – from France, interestingly. Really good stuff. It’s the only time I actually use filtered water to boil my pasta. We simply saute minced garlic in olive oil and finish the pasta in that. It took me a long time to figure out how to saute minced garlic properly. It takes at least 10 minutes and the garlic should not brown. If you don’t have local garlic available, Trader Joe’s has USA-grown garlic.

We had a few picky eaters staying over last weekend so I can sympathize. Good luck!

Maybe this is too simple, but with those constraints I would make a browned butter sauce and add sauteed summer squash and peas. Get a nice sear on the squash so they are caramelized and soft. Parm Regg on the table for grating over. You can squeeze lemon over or not, even top with toasted almonds or pistachios. 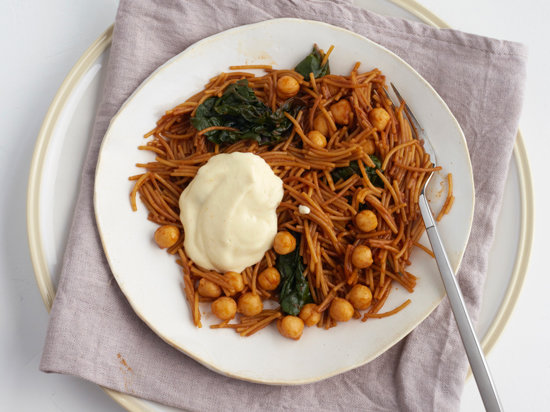 Get Obsessed with Fideos, Your New Favorite Noodle

I forgot to mention, fry fresh sage leaves in the butter and use to garnish adult plates.

They might just need a few more years before pasta with anything on it or with it is appealing.
Sounds easy enough to just put aside the kids portion with their olives or corn or whatever separate on the side and then doctor up the adults pasta with whatever sounds good. Certainly have them taste your sardines and sage or puttanesca etc but odds are they are happier with somewhat plain pasta more than much else

My kids loved plain pasta with butter, salt & pepper. Think ‘mashed potatoes’ - the pasta version. It’s really wonderful. You’ll be surprised when you try it. Like white potatoes, it’s just a basic starch, you know. Then, as others have said, pass assorted sauces, proteins, vegetables, cheese, etc., for folks to add as they wish.

A bean based sauce such as 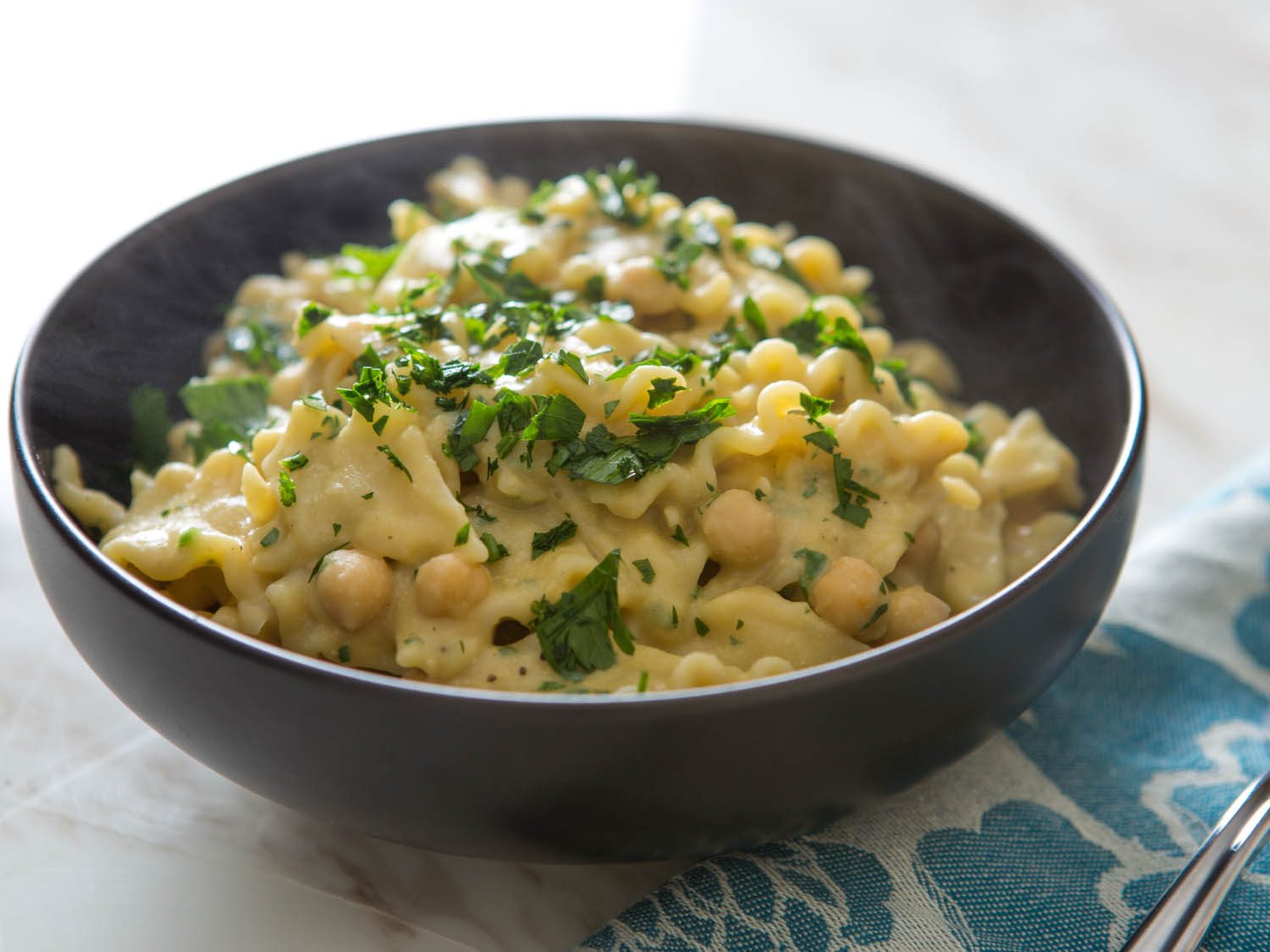 Turning a bean purée into a pasta sauce may sound strange, but just think of it as a variation on the classic Italian soup pasta e fagioli, just with a lot more pasta and only enough "soup" to coat the noodles. It's delicious, and it just happens to...

I can find the easier recipe that I use if you want it.

When I was a kid, my mom made wide egg noodles with cottage cheese, sprinkled with cinnamon. My kid (and wife) won’t touch it.

I think aglio e olio would work great too when I am just whipping up some carb, i.e. pasta, for their lunch. Certainly a lot more appealing than plain pasta and its so simple. Thanks for reminding.

How did you combine these two? Parmesan shaved onto the pasta or some other ways?

Why the kid doesn’t like tomato sauce, is it too acid? Or the texture of paste? Maybe you should add less sauce? Too overwhelming the taste for them? Put less herbs for them.

I have no idea. She eats cherry tomatoes just fine. I guess she just doesn’t like the paste form. She also don’t particularly like tomato pizza. For sure its not the herb because I’ve tried tomato sauce without herbs and it doesn’t make it more appealing to her.

I wouldn’t suggest soy sauce or go Asian, in this case, cook them Asian noodles, what a waste to do that to good Italian pasta!

Yes, we have access to noodles at a good price, so I’d try to use noodles for the noodle recipes!

With our son we started out with pasta, parm and butter and worked up to adding peas, broccoli, using oo, adding herbs. Before you know it he is filling the pasta pot w water, getting the ingredients out on the counter and making his own meal. My wife was really clever involving him in food decisions. As fussy as he can be, he never turned away from getting in the kitchen to help and learn.

All from a plain bowl of pasta.

That’s certainly somewhat true. With the old one, now I am competing against purchased school lunch. I am trying to make the dish a bit more appealing now that she’s getting older and smarter- I give her lunch to bring to school, and she brings it back and tells me she bought lunch instead. Ouch.

I really need to up my game.