I don't even like pasta carbonara, but I think this is a stunningly stupid article from the New Yorker 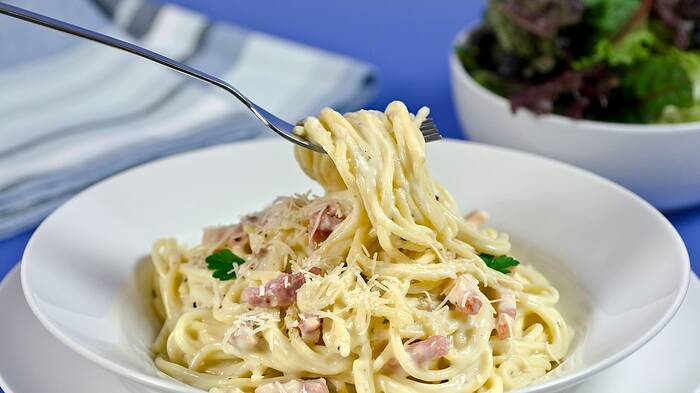 The French pseudo-carbonara that has provoked outrage in Italy is merely one episode in a larger pasta revolution sweeping Europe and America.

However, I was unaware that apparently millions of Americans are now cooking their dry pasta in their pasta sauce, so I guess I learned something new (if it’s true). But mamma mia.

Really? I thought it was an enjoyable read.

I can’t find the stupid part of the article. I happened upon the Martha Stewart one-pot pasta recipe the other day while looking for something else; I’ll try it and see how it works. I’ve made penne “risotto-style,” by adding broth incrementally, and I like it a lot that way.

I saw the ad for the new Barilla product this past week. I will NOT be cooking my pasta that way.

The writer is only slightly over-the-top pretentious.

The writer is only slightly over-the-top pretentious.

It’s The New Yorker. Slightly over-the-top pretentious is its mission.

I agree. Not finding the stupid part. And, like lingua, I thought it was a fun read. Food snobbery robs us of the chance to improvise and perhaps improve a dish. Where would El Bulli have fit in if everyone wanted the same ole, same ole.

I need to ask a dumb question. If you throw the quarters tomatoes, chopped onions etc into a pan and then add the spaggetti how does to pasta soften so you can get it in the pot or do you just use very long pots like a fish kettle…? (or do you break it into bite size pieces so you can also save precious time eating it).

My take on why it’s a “stupid article” is it doesn’t question what advantages these modified recipes have. Traditional Carbonara is amazingly simple to make and very quick: you can prep all the ingredients whilst the pasta is boiling, combine them and have it on the table in under 15 minutes. The inconvenience, for me, seems to be that there is so little time to enjoy a cooks glass of wine or two during the preparation…!

Fast pasta dishes are fast to start with without the need to “improve” the cooking time, and slower dishes (like a ragu sauce) improve with a longer cooking time. It’s no surprise the Slow Food movement started in Northern Italy.

To clarify, OP said it’s a “stunningly stupid article.” Can’t say that I was stunned.

As a New Yorker subscriber, I have read, and agreed with, most of Adam Gopnik’s contributions. This one’s no exception. If there’s anything pretentious, it’s purists’ insistence that traditional methods, like the risible demand that pasta be cooked in copious amounts of water, are sacrosanct.

The advantage to the method discussed here is obvious. It uses less water and less electricity (or gas). Also, because a single pan is used, there’s a slight resource conservation in that a second vessel is not being washed and rinsed. Multiply that by hundreds/thousands of homes on any given day, and it may have ecological impact.

I’ll give you that, and raise it that cooking, like everything else, evolves with time and technology.

I’m sure there were those who balked at not spearing things on a stick and holding over a fire, too. All those damned newfangled clay and iron pots… what is the world coming to?

And my induction cooktop that you’ll have to pry out of my cold, dead hangs

Just first a point of clarification about Italian pasta traditions:

There is very long, robust and much honored tradition in Italy of invention when it comes to new pasta creations. .These creations are found in nearly every restarant of note in Italy, and the proud creation of a new pasta dish most often bears the name of the restaurant, or the chef, or a famous patron of the restaurant. New pasta new dishes are created every day in Italy. Period. In addition, every home cook creates their own pasta dishes to please the family. If the point of Gopnik’s article is “defending” experimentation and innovation in pasta cooking against Italians who invented carbonara, the article is even stupider than I thought. (I don’t think that is what the article is about, but if it were, it would really be gobsmackingly stupid in addition to being stunningly stupid on the whole.)

As a point of clarification about the Slow Food movement, it is more accurate to say it started in Rome, triggered by having a MacDonald’s at the Spanish Steps. Seldom mentioned is that the original manifesto for Slow Food was signed in Paris. Carlo Petrini is from the North, but the concept of “slow food” isn’t really about cooking times. It had as much to do with savoring the eating experience, not grab and and run, and also to protesting cutting corners in food and wine mass production that ends up making people ill.

Carlo Petrini: The Slow Food gourmet who started a revolution

For 20 years the Slow Food movement has waged war on mass-produced meals.

Just first a point of clarification about Italian pasta traditions:

I didn’t get the impression that this was about Italian traditions.

My understanding is that the author (Adam Gopnik) saying some people in Italy gave this French blogger a lot of pressure. So much so that the video was pull off. His point is that people were objecting is “simple” method, not because it is actually wrong, but because the simple method took away the “scholarship” and “status” of cooking and pasta carbonara. Therefore this new simple method need to be criticized – even if it works.

I assume Adam is criticizing those people who criticize the simple video.

Your objection is that Italians value innovation, and that Adam is wrong to generalize the Italian push back of this simple technique?

that there were push-back against this simple technique?

It comes down to they were talking about their way was better than the way the Italian mama cooks her pasta for the family . Those are fighting words .

I guess I don’t even know what the rage is about.

I have to agree. For one thing, Adam Gopnik is a really, really good writer, and I pretty much agree with his points (in this, and in nearly every piece he writes). For another, as soon as I read this article, I went straight to the Food52 recipe for one-pan pasta, because I think it sounds like a great idea and it’s obviously very well tested at this point. I look forward to trying it.

Those Italian nonnas were and are great . if you had the real home cooked meal from them . My deepest memory , Sparrow with polenta . Ok Cat enough put em up .