A few weeks ago, I made it over to Hunky Dory for lunch. I had so anticipated this opening and was surprised to see it wasn’t very busy. The dishes I really like are on other menus, such as the bar menu and the happy hour menu. I probably should have asked, I’m sure they would have served them in the dining room.

I had the fish and chips. The fish was a little tough, the chips were excellent and it was all hot out of the fryer. I looked at the wine list and was a little sursprised at the high prices on the extensive list - maybe one was under $50 and most were over $80 and on up to $800+ Not what I would expect in a “pub.” So where is ole Mike C. Miller from CH, our intrepid wine connoisseur from Dallas always looking for the priciest wines in Houston? They are here, Mike, right here.

I want to return to relive the salad days of Feast and dine on the exmoor toasts and rarebit. Maybe they’ll add that amazing pork belly candy Feast used to conjure up. I did have the pork rillettes and tasted the chicken liver mousse and Gentlemen’s Relish, all of which were divine. I did love Feast.

If you go, let me know how you liked it!

Thanks for the report. Sure been getting raves from the foodie press. I want to go and had my eyes on the fish and chips as a first taste.

Ah yes, Mr. Miller, a solid contributor. I looked through many a profile page over there on some of those other posters and nobody puts any information in their profiles, not even what city they’re from much less contact information.

The more places we report on here, the more likely it is someone searching for information on Houston restaurants is going to come across us by googling, etc.

The fish was grouper, white and flaky, but not the cod I’m used to in a fish n chips. Still, all in all a good place I think. Probably has some growing pains. It was hard to see from the main road, tucked back a bit and no obvious signage. I have high hopes for Hunky Dory. The Pub is adjacent to the main dining room, separated by a partial wall. There’s a lovely outdoor patio. I’m still getting used to the Heights as a destination. It has been an insular community within Houston for many decades. Years ago I read a series of historical novels set in the Heights. Historical novels are my reads. But I ramble. I’ll save the rest for my book group! Ha!

I went looking for it a few weeks back, passed right by it, then realized where it was but it wasn’t yet serving lunch. That was the day i ended up at Lee’s Fried Chicken and Donuts.

I get lost in the Heights easily these days, and Midtown. I’ve been around so long I think I can find any place in Houston but what I find is things have changed so much I don’t recognize where I am.

I still have high hopes. Alison Cook has tweeted about the Exmoor Toasts. Only on the Happy Hour Menu?

I only see Exmoor Toast on the HH menu currently. I used to order them at Feast. Tasty morsels.

Well, this is the first I’ve heard of a British Steakhouse attached to Hunky Dory - Bernadine’s

Can I still consider myself a “gastronome” if I want nothing whatsoever to do with “chicken live mousse”?

Phaedra Cook’s take in the Press.

The Silver Salver looks pretty good to me. I wonder what that is on the silver tray on the website?

BTW, noted on the bottom of the Dinner Menu - ‘ask your server about items from the Pub Menu’ or some such language. I wonder if that means you could order the Exmoor Toasts? No such language on the lunch menu unfortunately.

The ploughman’s lunch looked very much like that, on a smaller scale. Those are pickled onions in one creamer. The gentleman’s relish on the lunch platter was amazing. I can’t agree with her on the wine prices. It is in fact “reality” that they run at the high end.

Everytime I see that Silver Salver I want one. Maybe we could do another Charcuterie get-together?

I’ll just stick this here, since BERNADINE’S shares an address and ownership with Hunky Dory.

Went to lunch at Bernadine’s and was struck again at the lack of signage or identifying marks for Hunky Dory and now Bernadine’s. It could be a dentist office for all anyone is aware just driving by. I was thinking that big neon sign is on back order, but…

After walking down a short covered hall and through a patio and turning left, you are faced with the first sign of what this place is, “Bernadine’s” is scripted on the glass door.

The dining room is fairly small, with a full bar with bar stools to the right and seating to the left. The patrons this day were ladies who lunch and oil folk talking of drilling, or not drilling.

The facebook page had advertized a lunch special of their YaYa gumbo with rice and bread for $10 and it seemed like a gumbo day. The server had no knowledge of the special at all. I shared a bowl of the atypical gumbo (for the $12 menu price0 and an order of ranch dusted chicharrones for starter. The gumbo was piping hot roux with andouille sausage and supposedly chicken, though it looked and tasted like slow roasted beef. No veggies. The chicharrones were novel and freshly “poppled” as they said.

I went with the Peacemaker Poboy which was stuffed with both shrimp and oysters, and served on really good french bread bearing a shattery crust and tender insides, it let the seafood shine while adding great texture. I tried to google where they get their bread, and came across an employment listing for bread baker at Bernadine’s, so I guess they make it in house! The Fried green tomato poboy held my interest also before I ordered the Peacemaker. 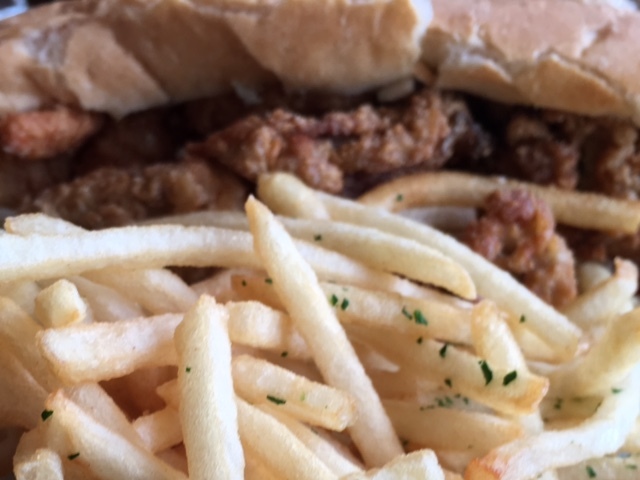 I asked for ketchup twice from two different servers and finally got it near the end of the meal. I also asked for sweetener for the tea three times, the second time getting two packets and the third time the sweetener holder. The service hopefully will improve over time.

The ice tea was $3, the wine list, while offering a few more reasonably priced bottles than Hunky Dory (but a GERMAN Rose? for $55? Vive la France) were still in the stratosphere. A sommlier was around. When I asked about the gumbo special the server wasn’t aware of, she did tell us the specials of the day, one of which was a pork terrine prepared in a work intensive way. That was ordered without further questions, and the bill reflected the surprising price of $34.

I will go back, probably to sit on that nice enclosed patio for a sazerac and bar menu items.

I had to search to find the name of the chef. Couldn’t find it on the website but did on FB. So I guess they don’t use the same kitchen as HD. Funny about the signage but at least it looks like there’s more than 7 parking spaces!

I still want to go to Hunky Dory but I think I can pass on Bernadine’s. 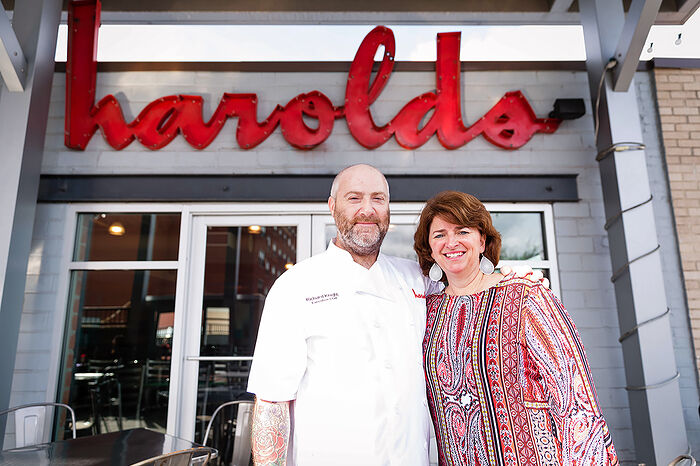 Executive Chef Richard Knight Finds A New Home At Harold’s In The...

Richard Knight, formerly of Feast and Hunky Dory, has taken the reins of the kitchen at Harold's In The Heights in Houston.

Will the Exmoor Toasts pop up (

I never made it to Harold’s when it was a men’s store nor so far as a restaurant. Perhaps.

The more places we report on here, the more likely it is someone searching for information on Houston restaurants is going to come across us by googling, etc.

I went for lunch once and had a salad of some kind. I saw Knight was going over I would like to see the Feast pork belly again. Dreamy stuff.

I never made it either but I still remember the old commercial where Harold says, " I dress 70, talk 80, and shoot 90, when my putter’s hot."