Dropped into Hughie’s with the usual suspects yesterday. It’s located near where TC Jester(s), Ella and 18th and 19th and 20th get all tangled up.

I recently had it brought to my attention, (but I don’t remember where), and when the mater suggested Barbecue Inn for a chicken fried steak, I suggested Hughie’s and she went along with it. If you haven’t been, it’s a cozy little mom and pop in a former Dairy Queen building. Except for the shape of the street sign, little of that former incarnation remains.

Something about Dairy Queen, Queen Dairy and finally a Vietnamese restaurant with a Texas twang. What’s not to love? You can see the eclectic menu at the link above.

Mom had the aforementioned chicken fried steak with mashed potatoes and a “Vietnamese Kale Salad”. The salad was finely shredded kale with pecans, a bit of feta and thinly sliced red onions. She asked for no onions of course and the waitress explained that the salad was premixed but she’d ask the chef. Sure enough she found only one thin round that had escaped the chef’s scrutiny. She said she liked BBQ Inn’s version of the CFS better, but she ate a pretty good sized portion with little to no conversation about it at all. I tried it and thought it was pretty darned good.

OBD was also attending and he ordered the salt and pepper spare ribs for the table and the special, seasonal, limited time only, owner prepared, labor intensive, 22 hours in the making, pho. The ribs were pre-cut into sections and battered and deep fried. They were tasty, but I had one or two that could have been a bit crisper. He liked the pho and I tried a spoon of the broth and found it almost “too” richly complex for my taste. I’m sure it’s an acquired taste, but I don’t really care for lobster or foie gras either so assume you should give it a try if that’s your thing. I’ll bet you’ll like it.

Yours truly ordered the Shaking Chicken, as recommended by our server, Summer. It’s basically a crisp chicken stir fry with fried rice and the kale salad discussed above. You know what? It was really good. Both the tender chunks of chicken and the rice had that elusive wok hay essence that is just so unique. Simple but expertly executed.

The bottom line is that I liked it. They have dozens of craft beers and I had a couple but couldn’t tell you what. That whole scene just confuses and confounds me.

But for the food? Go there. It’s a cool little spot. 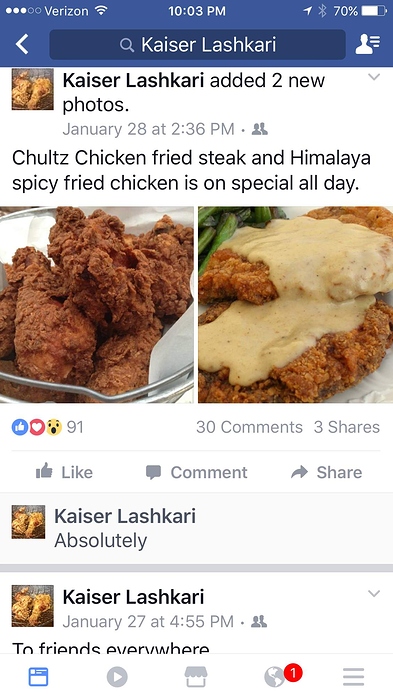 I"ve been hearing of this place for quite some time now so I really appreciate the full review.

I haven’t even ever gotten over there to try the fried chicken.

I wonder if Kaiser has ever considered moving to a larger place to accommodate the crowds?

He closed for about 5 days last week to remodel, but I think just the kitchen. A dining room update would be nice.

You’re welcome for the free publicity. Keep up the good work. 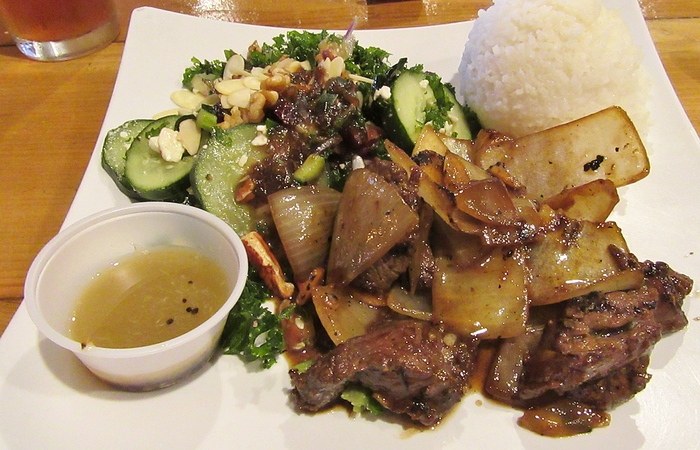 Bo Luc Lac - ‘Shaking Beef’ - Filet mignon and onion (note: about equal parts of each in this dish) - I thought this was a stir-fried dish but the menu says flame broiled. A couple of pieces still had ruby red interiors but most were just pink.

Kale Vinaigrette Salad - mine had kale, tomato, red bell pepper, red onion, dried cranberries (actually, I thought they were raisins), feta, cucumbers, slivered almonds and walnuts. The salad was dressed; if I had used the extra vinaigrette, the plate would have been awash.

This was the ‘meal,’ could’ve had just the beef/onions with a side of fried rice for the same price.

Excellent. I’m no esspert (only had the dish once before, as a banh mi from a food truck) but loved it. Next time would try the fried rice side.

Place is a mad house (in a good way); jam packed at 11:45, parking lot likewise. Loud. Not offensively but I had to have the waiter repeat everything for me. But then I’m old and have some loss of hearing. Waiters, a generous number thereof, were constantly scurrying.

Condiments on the table included ketchup, hoisin sauce, sriracha and Maggi seasoning sauce, which helped with the rice.

Next time, I’ll try the new location which I think is bigger.

I went to the N. Main location last week with a friend - 4721, just past Airline, outbound. Larger place, larger covered, partially enclosed patio, much less daunting parking situation with a satellite lot, .1 miles away per a sign.

My friend started with the Wonton Soup, special soup of the day, and cried out Whoa!, that’s spicy. I took a sip - lots of heat, but it dissipated quickly. I thought he didn’t like spicy food but he ate the whole bowl and raved about it to the manager/owner who stopped by late in the meal.

I had the Shaking Beef Fried Rice - the beef wasn’t as impressive as what I had before; the fried rice is made with the steamed rice and is clumpy. It was excellent. The Spring Rolls (only the Vietnamese terms Banh Mi and Bo Luc Lac are used on the menu, everything else is in English) were excellent, the peanut sauce even better. The egg rolls were also very good and provided me with the only left-overs of the day which made for a couple of nice breakfasts the next couple of days.

My friend had a chicken vermicelli bowl which didn’t look too good to me and he seemed to struggle to finish it.

The owner and/or manager stopped by our table toward the end and chatted for a few minutes. My friend raved about the Wonton and said it was his first time but he’d be back. I was flabbergasted. He left with a big smile on his face and so did we.

I’ll try something other than the Shaking Beef next time. I definitely prefer the N. Main location.