One of the highlights of our trip to Huế this time was to visit the irrepressible Madame Tôn Nữ Thị Hà’s Tịnh Gia Viên imperial cuisine restaurant, in an exclusive neighbourhood of Hue. It’s located in a palatial bungalow, situated some 500 metres away from the hallowed grounds of the Citadel, and ensconced in a landscaped garden with over 400 potted bonsai plants, rock gardens and fish ponds. 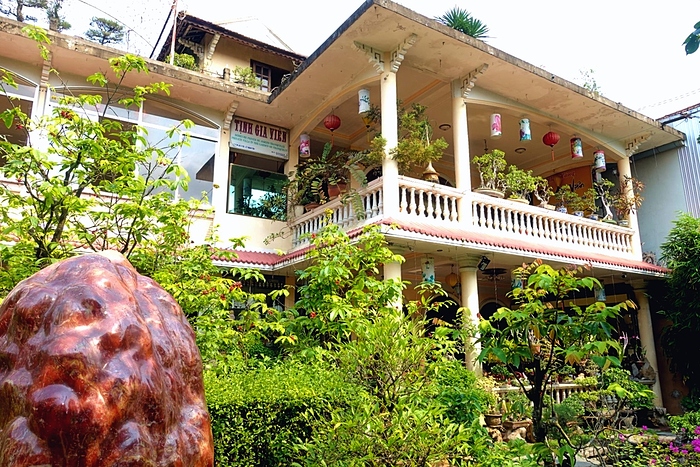 77-year-old Madame Tôn Nữ Thị Hà, who claimed royal bloodline, is regarded as Vietnam’s leading authority in the art of imperial cuisine, which dated back to the Nguyễn Dynasty, the last of Vietnam’s imperial houses.

The Nguyễn Lords ruled Vietnam for over two centuries from their seat of power, known as the Citadel, in the heart of Huế. The emperor lived in the innermost sanctum of a large, self-contained palace complex of imperial buildings known as the Purple Forbidden City.

Tự Đức, the fourth emperor of the Nguyễn dynasty of Vietnam was an out-and-out gourmand who demanded that his daily morning tea was brewed using only the dew collected overnight from lily pads on the ponds of his palace.

During the reign of the Nguyễn Lords, no woman who had ever entered the Purple Forbidden City would be allowed to leave (not unlike Hotel California

). As for the royal chambers where the emperor himself lived, no other man would be allowed to set foot inside, upon pain of death! 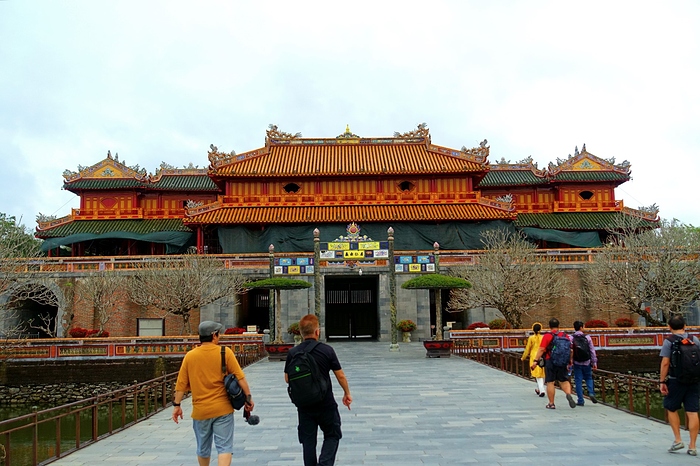 The imperial cuisine of the Nguyễn Lords, who were served 50 carefully-curated and prepared dishes for each meal (cooked by 50 different chefs, and brought to the royal dining table by 50 servers), subsequently influenced the regional cuisine of Huế, which tended to be more dainty in size, in comparison with other regional cuisines in Vietnam. We were told that, of the nearly 1,700 unique dishes of Vietnam, about 1,300 are present in Hue, more than in any other city in the country.

For our visit to Tịnh Gia Viên, we specially requested to also see Madame Tôn Nữ Thị Hà prepare the dishes we were to have, instead of simply turning up for the meal. The grand old lady obliged and, boy, we ended up at her restaurant from 10am till 5pm! But it was an amazing experience, watching the labour-intensive, time-consuming dishes being prepared. Madame Tôn Nữ Thị Hà (she preferred to be called simply as “Madame Hà”) was pretty meticulous, and her trusted sous chef was none other than her own daughter, Ms Phan Tôn Gia Hiền, who handled much of the more arduous tasks, besides carving the vegetables into various animal and flower shapes. Madame Hà had exacting standards in procuring the ingredients for her dishes - 6am in the morning and she’d be at the markets to personally choose the freshest, best quality ingredients for her kitchen. 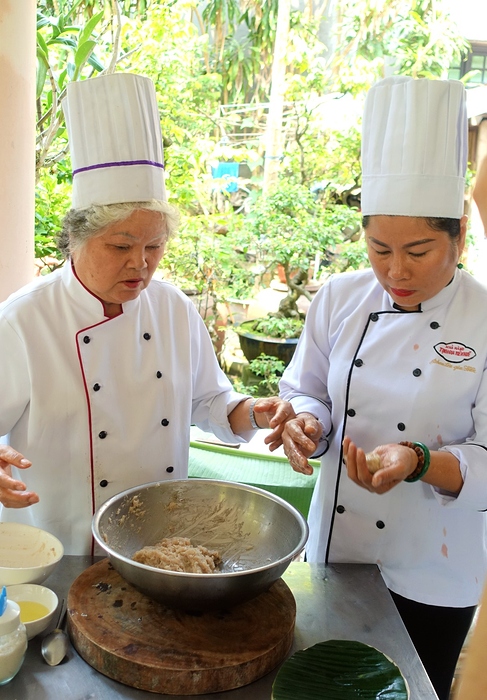 The preparation of three dishes were demonstrated - each of them incredibly taxing.

The shrimps were pounded with pork fat into a smooth paste, with egg-white (for binding) and a reduced fish sauce added for flavouring.

The shrimp paste were hand-rolled into little spheres, and steamed. 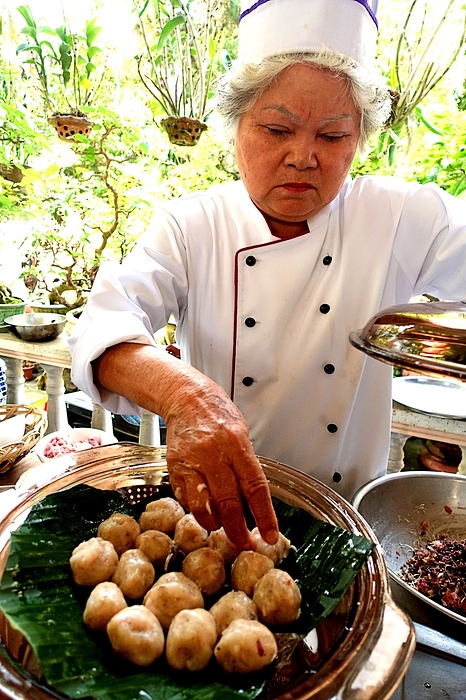 The steamed shrimp balls were then charcoal-grilled, and glazed with a mixture of egg yolk, vodka and honey. 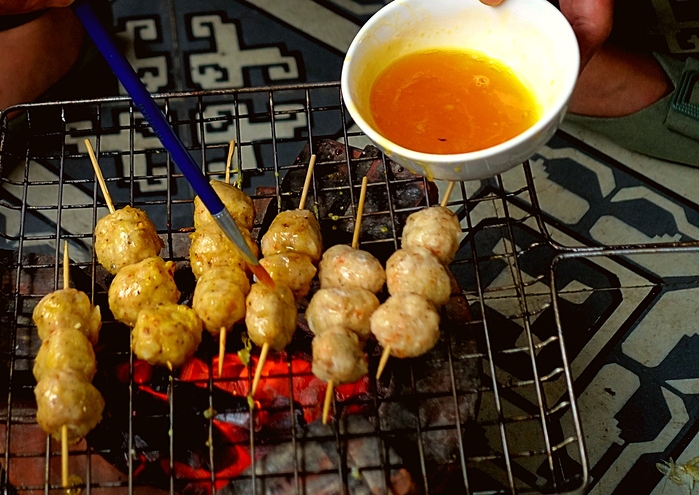 The cooked shrimp balls were then mounted on a kumquat tree and served to the diners, who’d pluck the shrimp balls off the tree and dip them into nước chấm fish sauce-chili dip, and eat with wedges of baguette. 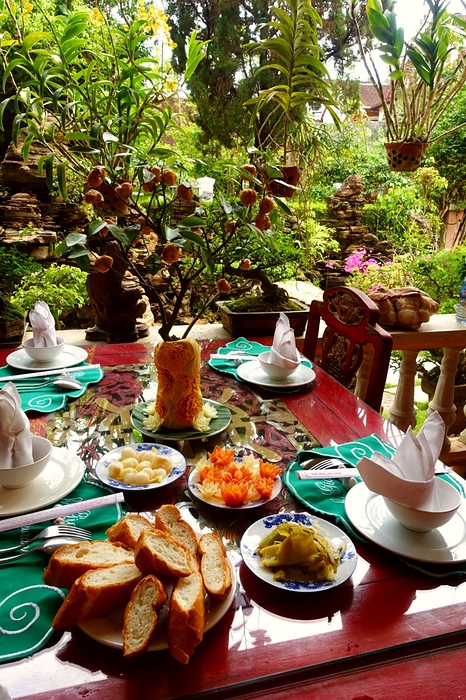 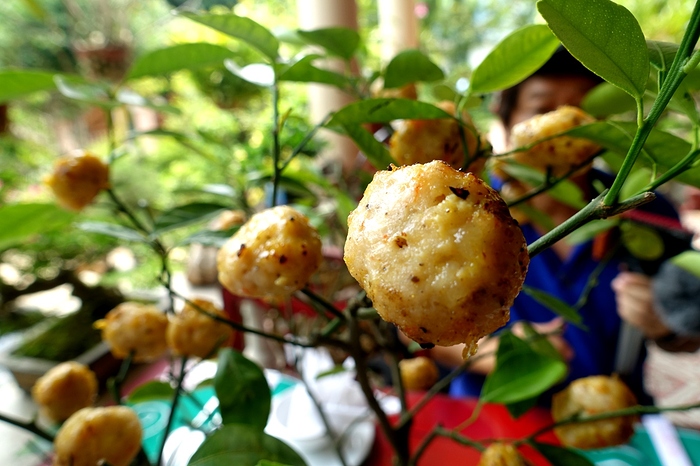 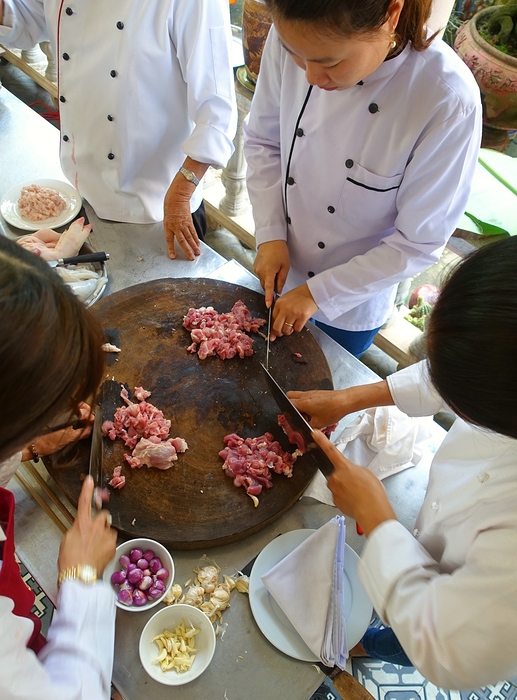 The minced meat was mixed with lotus seeds, finely-chopped mushrooms, black wood-ear fungus, some special local glass noodles and condiments, before being stuffed back into the whole, deboned pig’s trotter. The trotter was stitched up and carefully wrapped in muslin cloth, and steamed till cooked. 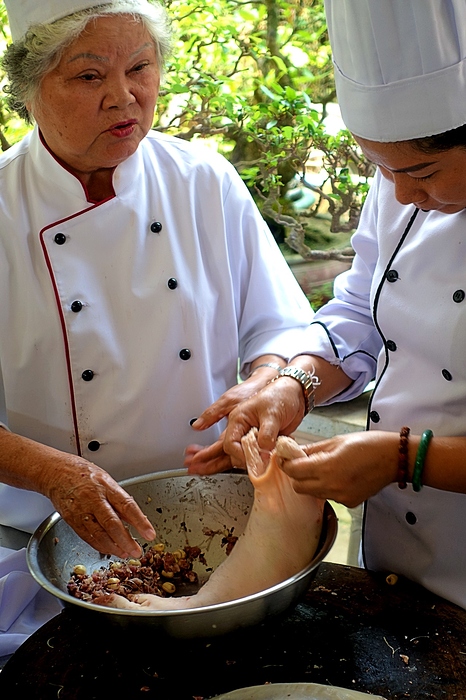 The cooked pig’s trotter was then served with a clear consommé made from slow-boiling the pork-bones, garnished with fresh coriander leaves. 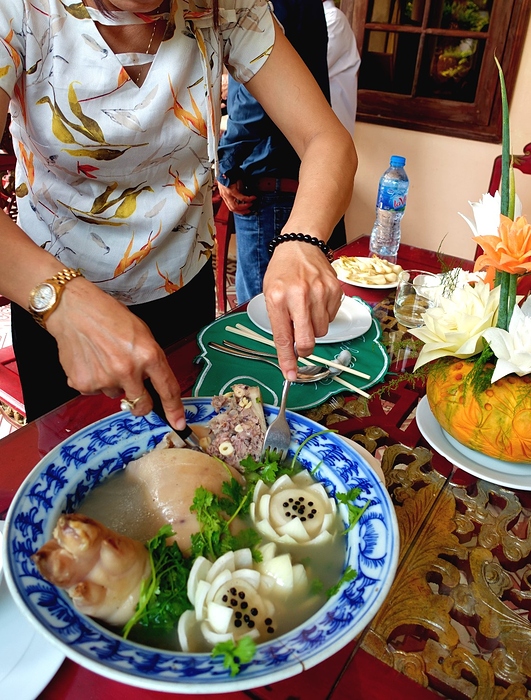 The minced meat filling was pretty flavoursome. The soup was surprisingly light, and had a slightly peppery, oniony flavour. 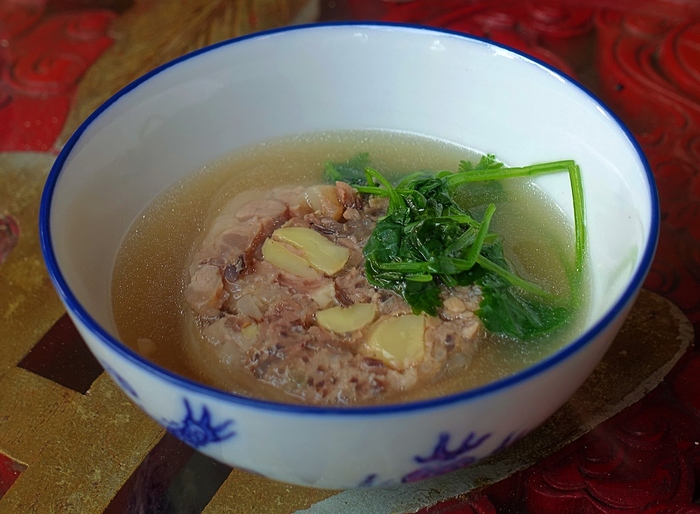 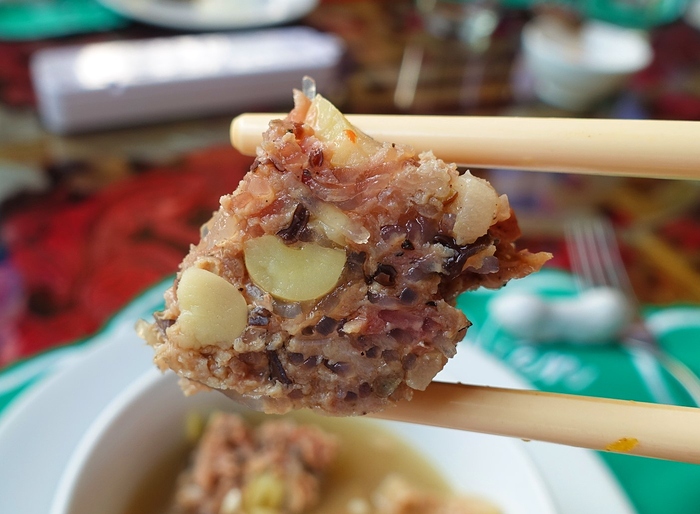 The filling of chopped cuttlefish tentacles, cuttlefish roe and condiments were separately wrapped in banana leaves and steamed. After steaming, the filling were unwrapped and stuffed into the cuttlefish and stitched up, before the whole thing went back into the steamer.
The whole cooked, stuffed cuttlefish was then adorned with some over-the-top, carved vegetables: carrots made to look like swans, garlic bulbs looked like little hens, carrots and radish cut into little flowerettes. 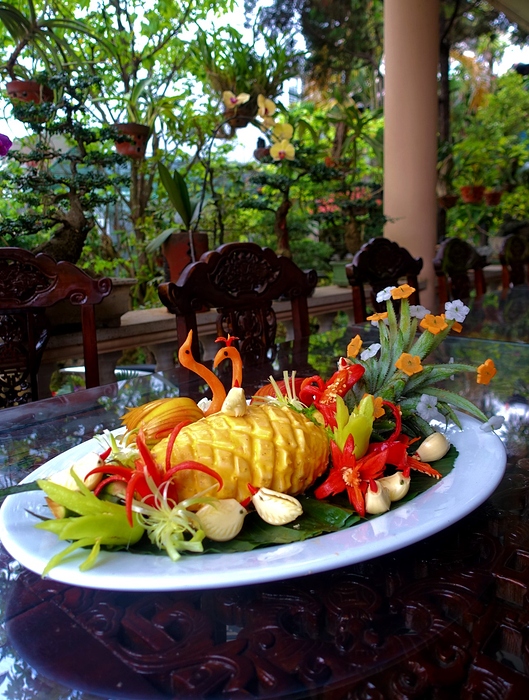 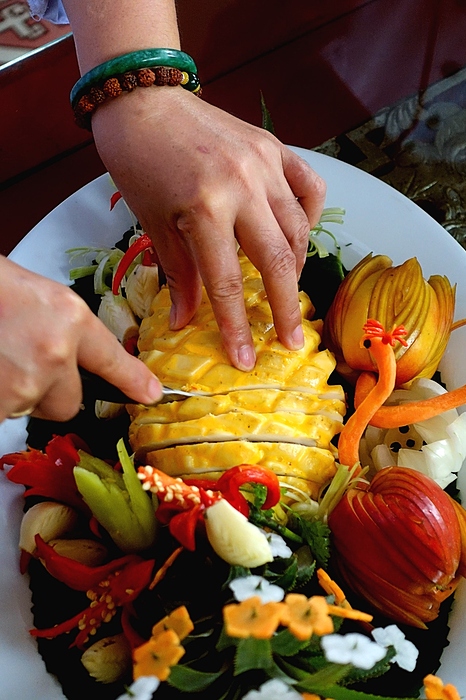 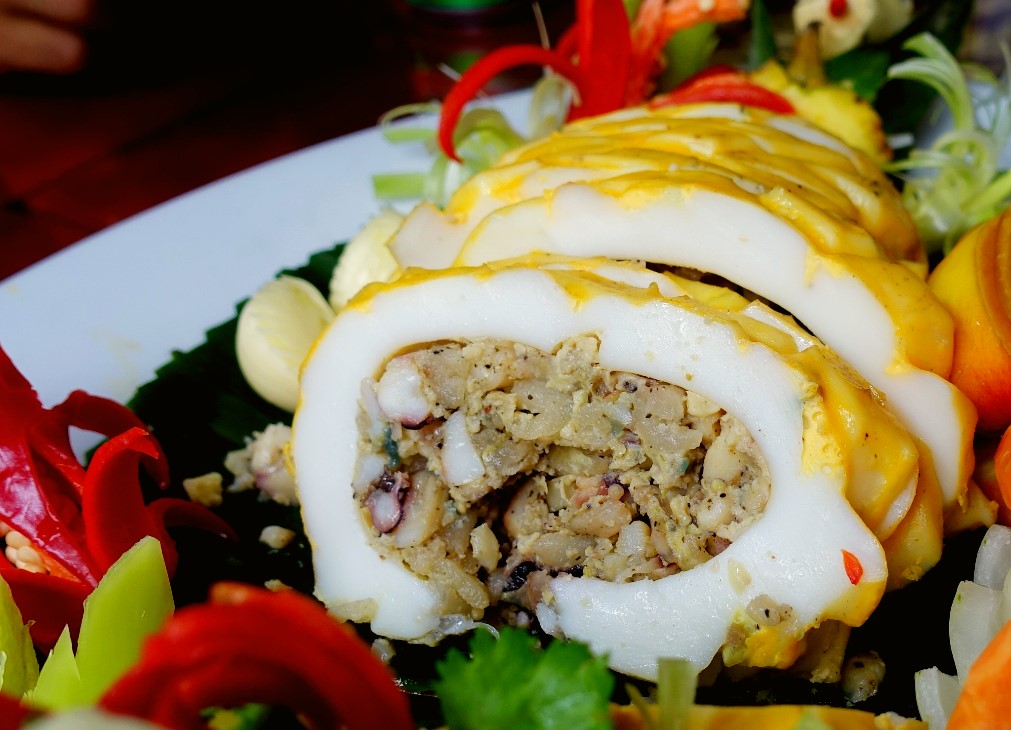 The overall impression we had? Preparing imperial cuisine can a real pain, and you’ll end up with some very ornate-looking, edible works of art. Flavours were, compared to the Hue’s amazing street food, surprisingly muted (bland, almost). But, as Madame Hà reiterated, imperial cuisine is meant to be subtle in flavours, so what do we know, eh?

It gets more and more ridiculously amazing. I always learn something from your posting. Thank you!

And I’m enjoying it vicariously through you.

Always happy to share! Hope to tell of a few more interesting places before I return to Singapore this weekend.

Thanks for the history lesson, Peter.

And the food you’re eating on this trip just continues to look fantastic. Such a joy. I wonder if high end Vietnamese food is available in the west? I have two restaurants near home. Both do a small range of fairly basic noodle & stirfry dishes. Tasty in themselves but I’m wanting more now!

I wonder if high end Vietnamese food is available in the west?

I highly doubt we can find truly authentic imperial Vietnamese cuisine anywhere outside Vietnam. In fact, it’s hard to come by even in the main cities of Hanoi or Saigon. This trip has been a real eye-opener for me - Hue was the imperial capital of Vietnam and there’s just so much history here!

In fact, it’s hard to come by even in the main cities of Hanoi or Saigon.

I had a meal of imperial cooking, but memory was vague. The only thing I remember about Hue is the market, there were some old persons that were locals that were able to speak French to husband.

Thanks for showing the elaborate cooking.

2 Likes
[Hue, Vietnam] A Complete Guide to Dining Out in Hue, the Imperial Capital of Vietnam
Help cover Hungry Onion's costs when you shop at Amazon!