Hue is traditionally the centre of Buddhist consciousness and learning in Vietnam, stemming from its imperial capital past, when Buddhism enjoyed the patronage of the ruling Nguyễn Lords. One of the most searing images from the Vietnam War period was the fiery death of Buddhist monk, Thích Quảng Đức, by self-immolation. Thích Quảng Đức was from Hue, and had journeyed all the way to Saigon, where he burnt himself to death at a busy intersection to protest against the persecution of Buddhists by the South Vietnamese government of the staunchly Roman Catholic Ngô Đình Diệm.

We spent most of yesterday exploring the Buddhist side of Hue, visiting temples and even an orphanage run by an old Buddhist nun who accepted abandoned children left at the door of her nunnery. In keeping with the theme of the day, we went vegetarian for all our meals! Many of the Hue’s vegetarian restaurants cater to the Buddhist monks, nuns, and laypeople who’d chosen to give up meat out of their religious obligation.

We had a good vegetarian dinner at Sân Mây, which was rather upmarket (I understood from a Saigonite friend that there is also a Sân Mây branch in Ho Chi Minh City/Saigon). One of the co-owners here, as well as being the chef is Nguyen Tan, who’s also an artist-sculptor.
The restaurant is located in a traditional Vietnamese house, full of intricately-carved wooden beams, and columns. Like most traditional Vietnamese houses I’d been to, it’s kind of smallish, but beautifully decorated. The centre space of the house would contain a prayer altar. The dining spaces are to the left and right of the central altar area, and are tastefully furnished. 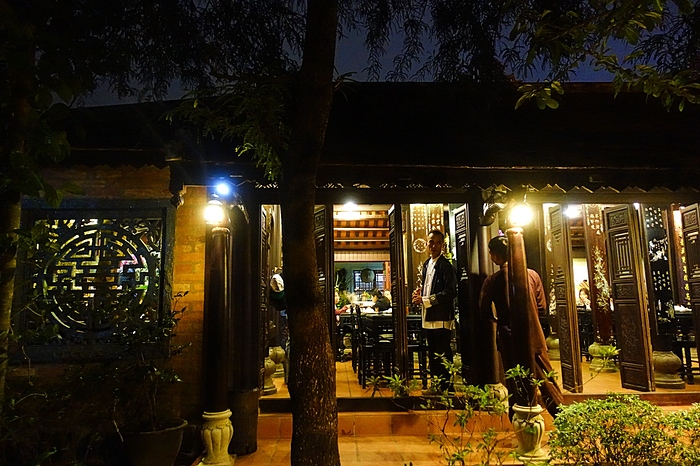 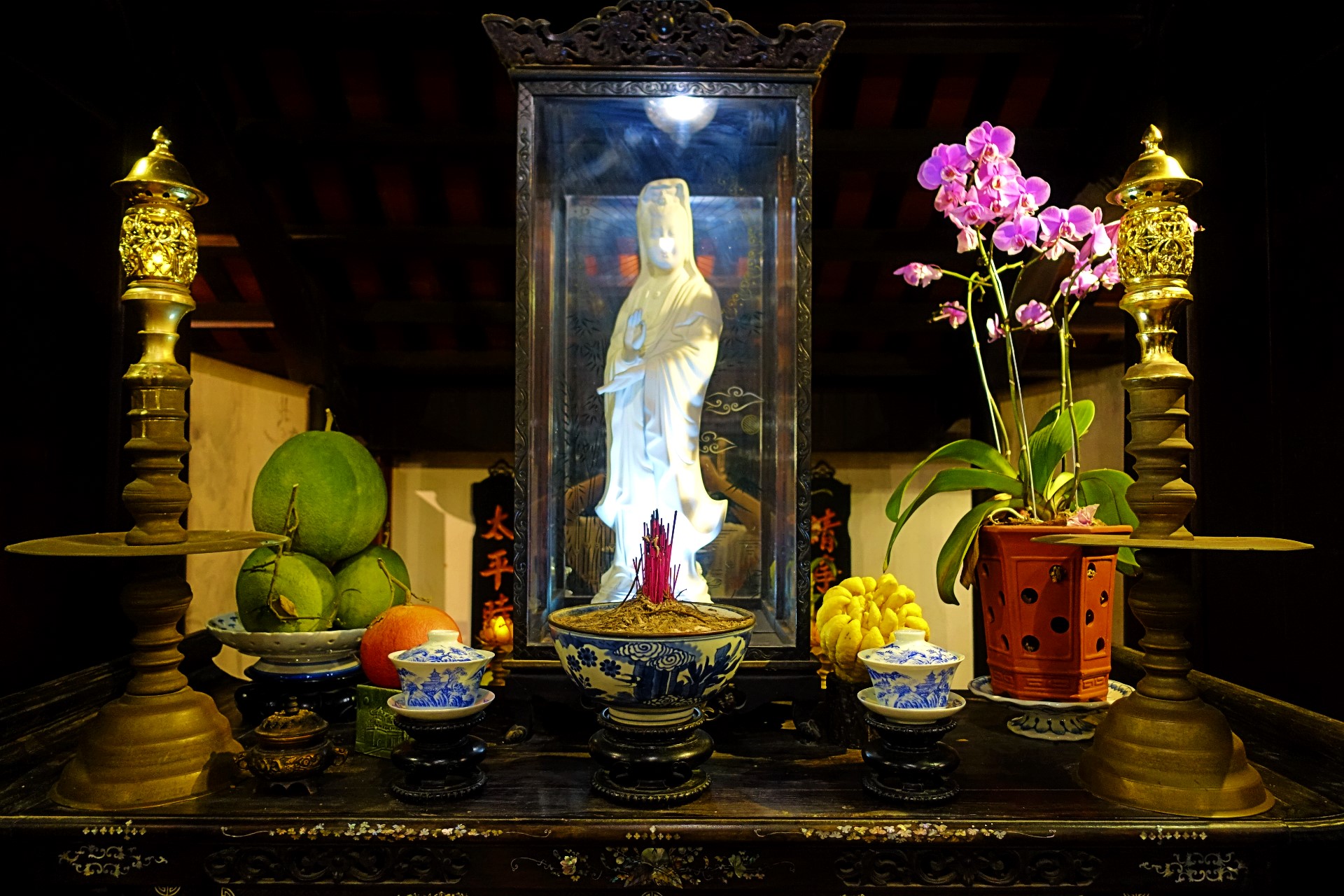 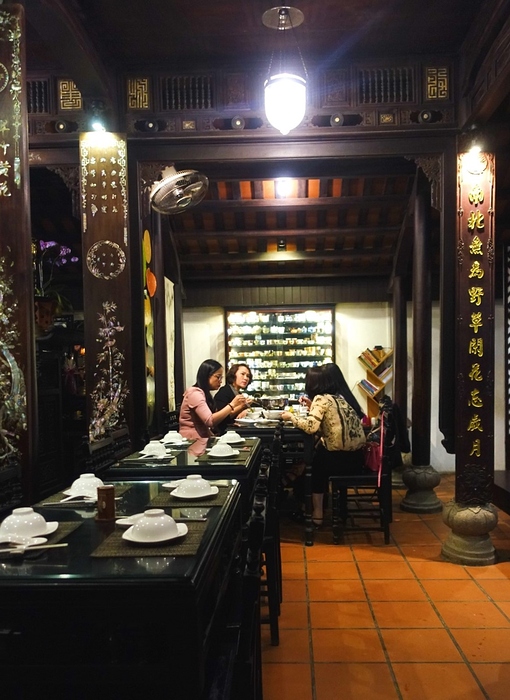 The rendition by Sân Mây was tasty, but paled in comparison to the versions served in Rex Hotel or other eateries which incorporated meat into the dish. 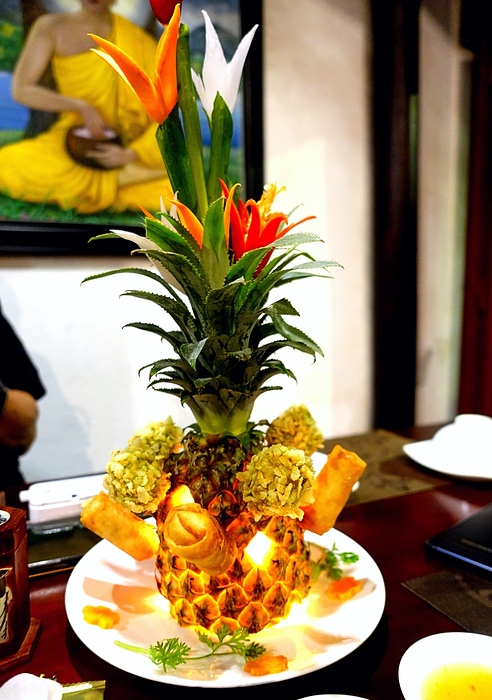 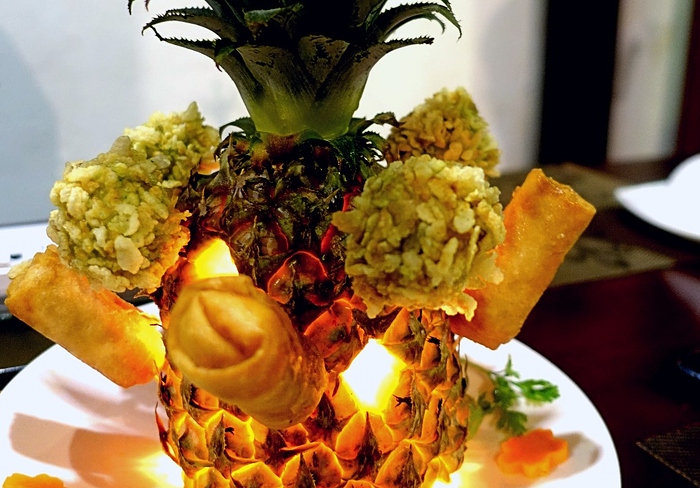 The salad with crisp rice crackers: 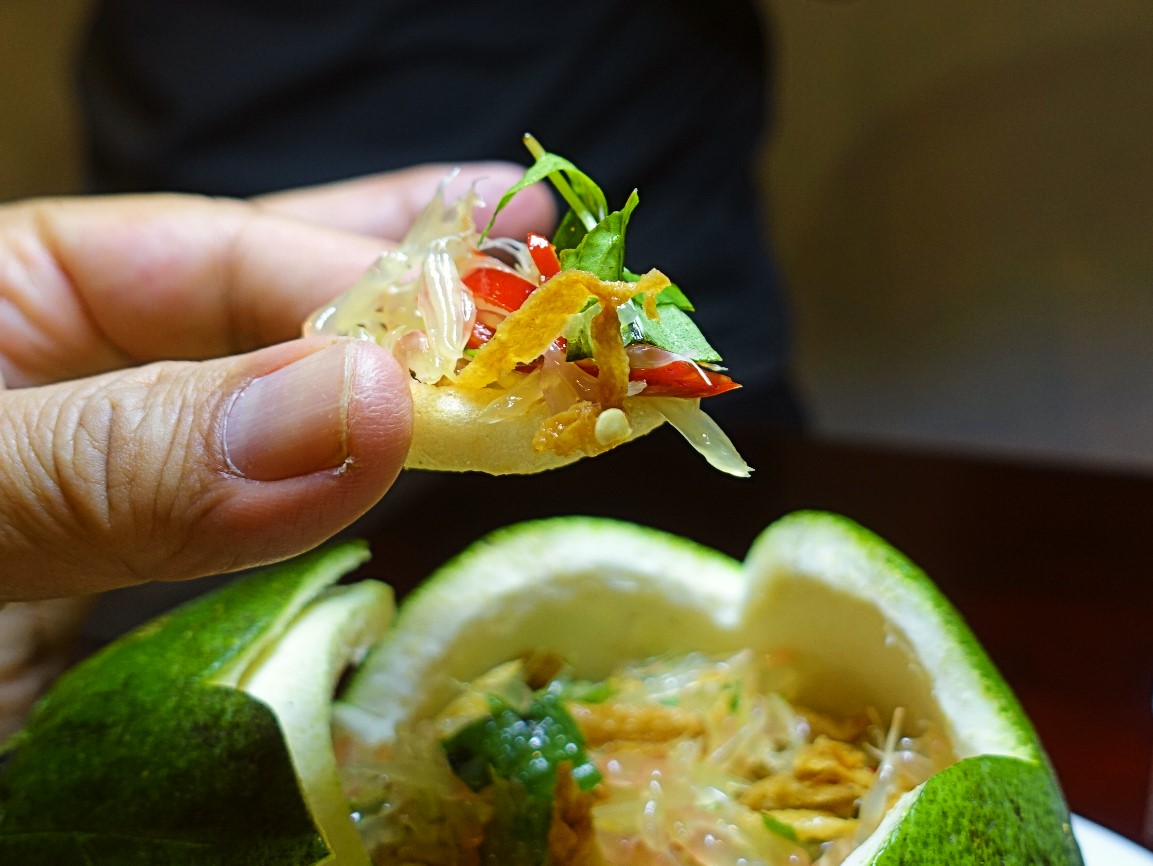 Over here at Sân Mây, they have a vegetarian version of bún thịt nướng (grilled pork with rice noodles). 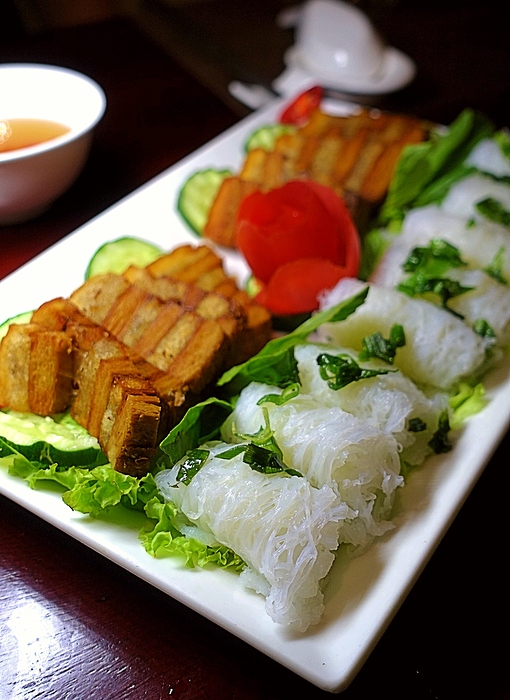 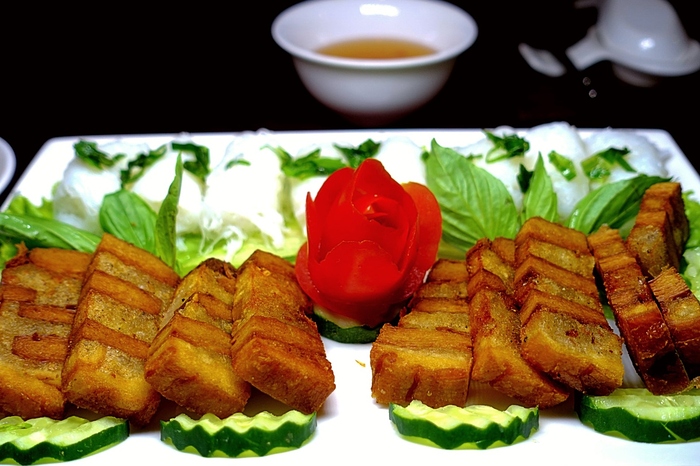 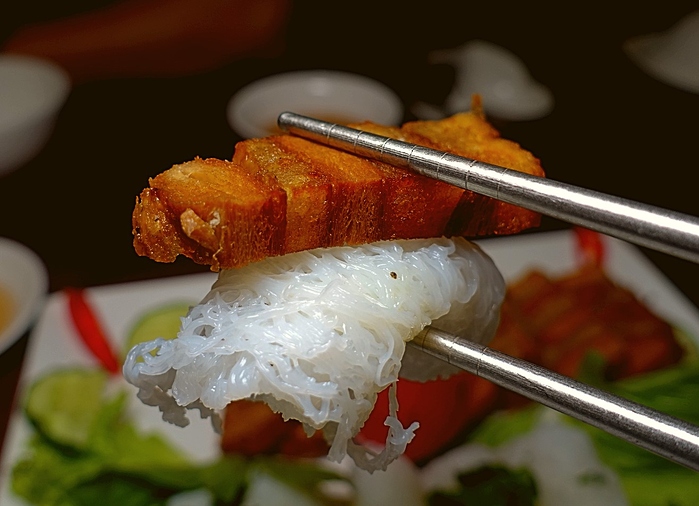 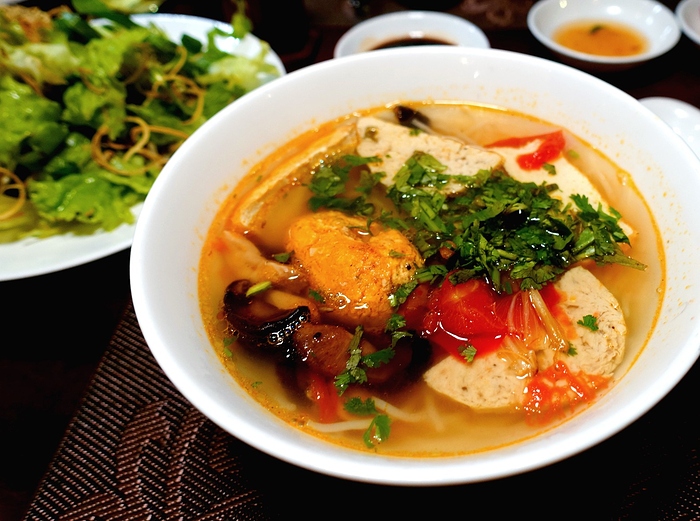 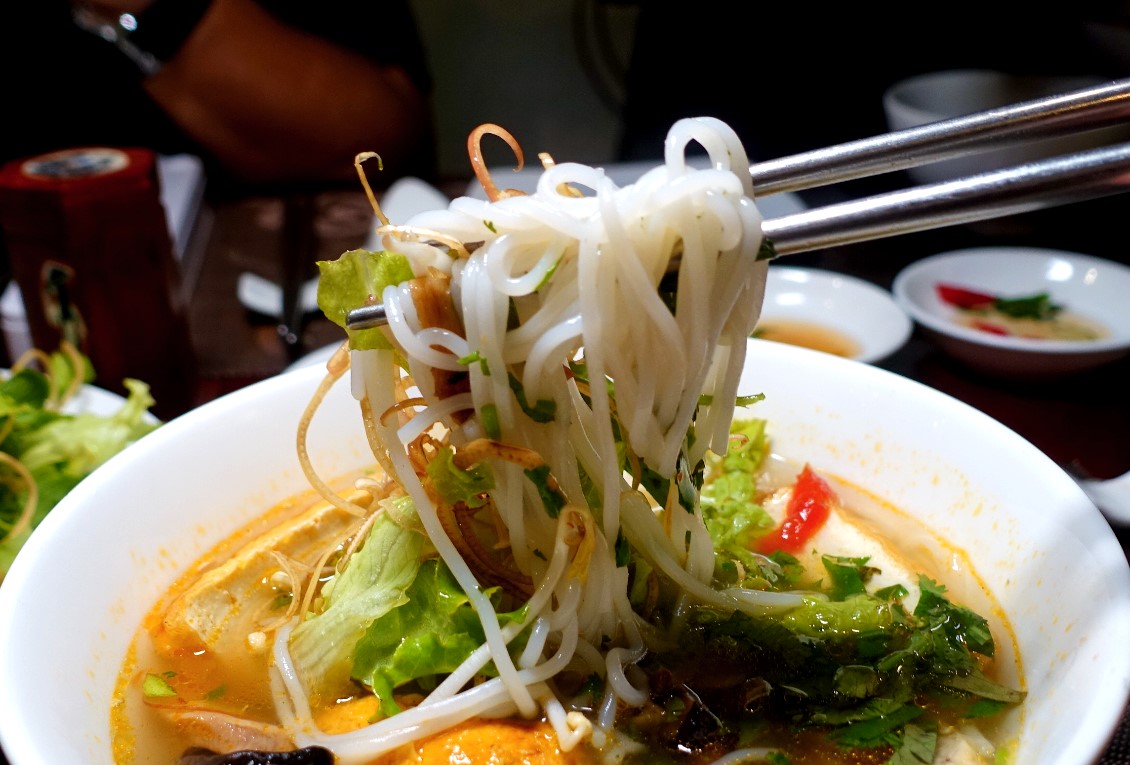 Overall, the food tasted better than I’d expected and, like most of Vietnamese cooking, the dishes had crisp, fresh textures and very light flavours. 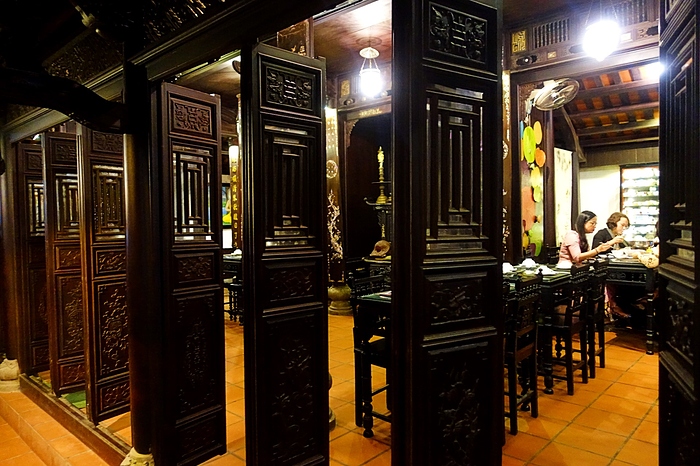 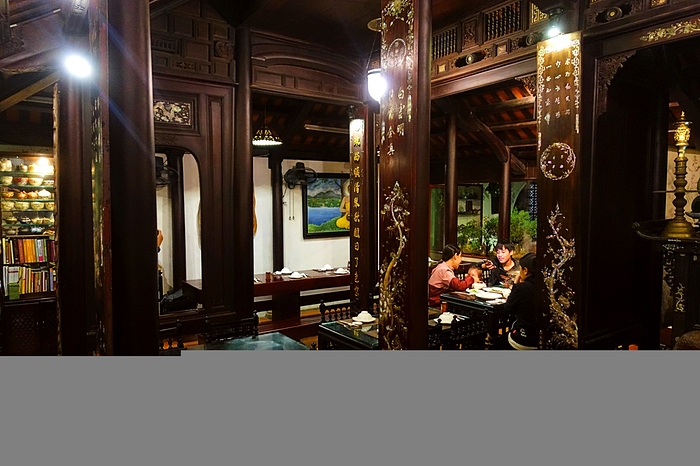 Very hard to top the Japanese when it comes to food aesthetics.

[Hue, Vietnam] A Complete Guide to Dining Out in Hue, the Imperial Capital of Vietnam
Help cover Hungry Onion's costs when you shop at Amazon!