Chợ làng Chuồn is a tiny village market on the outskirts of Hue, a mere 20 minutes’ drive from our hotel, Alba, downtown. We’d skipped our hotel’s excellent breakfast buffet in order to save stomach space for our foray into the market to hunt for local eats. 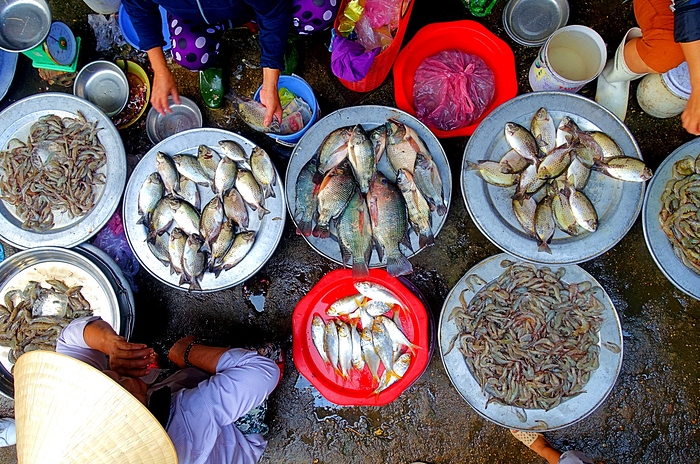 I love the smell of nước mắm in the morning. At Chợ làng Chuồn, it wafted through the air, like the ghost of a rabbit-fish freshly caught off the azure waters of Đầm chuồn Huế a stone’s throw away. We came, Ride of the Valkyries ringing in our heads, tummies a-growling, licking our chops, eyes scanning hungrily for the first bite.

Maybe, on a subconscious level, the xôi lúa rekindled childhood taste memories of the Kelantanese pulut pagi, a salty-sweet glutinous rice breakfast dish from Kelantan, the North-east Malaysian state where my maternal side of the family came from, and where the native Kelantanese-Malays descended from ancient Champans, known to the Vietnamese as Lâm Ấp. Ancient foes, but who shared the same tastes, culinary-wise. 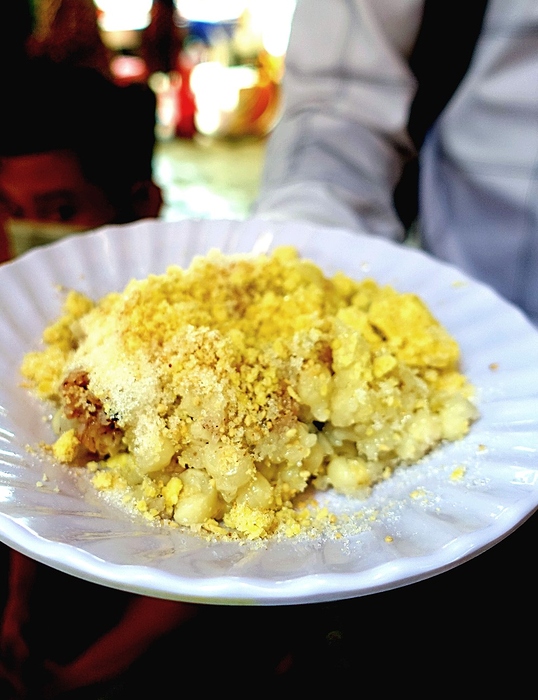 The bánh khoai was formerly called bánh khỏi or “smoke cake” in the olden days, because when they were served steaming-hot fresh out of the griddle, steam danced gently up into the air like silken threads of smoke. However, Hueans pronounced “khoi” as “khoai”, which sounded like ‘joy’ or ‘happiness’, and the new name stuck, for what could bring greater joy to one than to partake a well-stuffed bánh khoai.

The Huean bánh khoai actually originated from the Southern bánh xèo, but was harder to make as there was a precise ratio of rice flour to eggs that needed to be observed in order to get the texture just right.

Bánh khoai were cooked in heated little iron moulds, to which pork fat was added, followed by whatever ingredients one wishes to have: fish, shrimps, squid, beansprouts or mushrooms. Wait till the meats/vegetables were medium-cooked through, before pouring the batter (mixed into a slurry with water) into the moulds around the half-cooked ingredients. Add a spoonful of beaten egg, and cover. 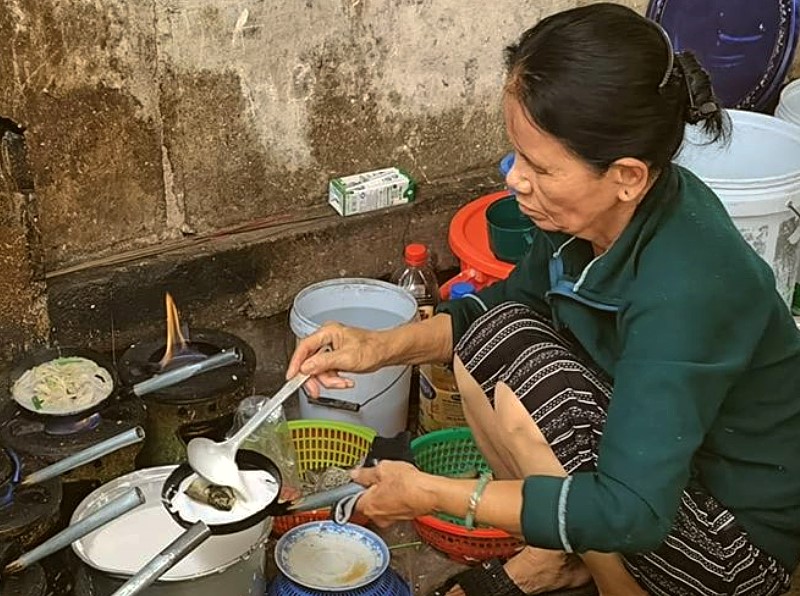 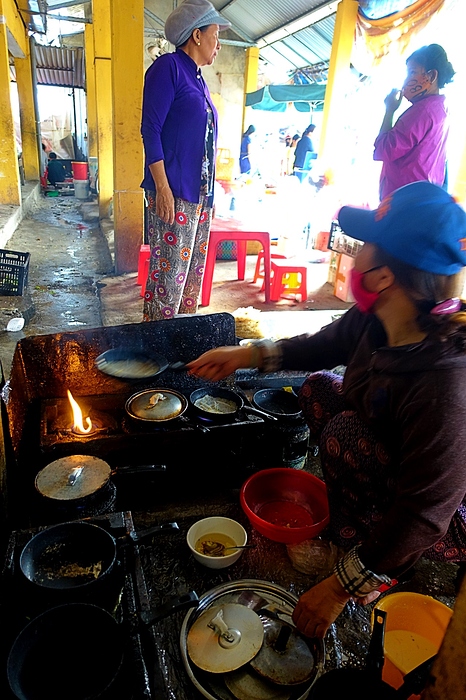 When the bánh khoai was cooked, with golden-crisp edges, fold them and serve with nước léo, a tangy peanut-tamarind-palm sugar-fish sauce dip. The bánh khoai here at Chợ làng Chuồn eschewed turmeric, and were served flat, allowing its diners to fold or roll up the thick, malleable crepes themselves. 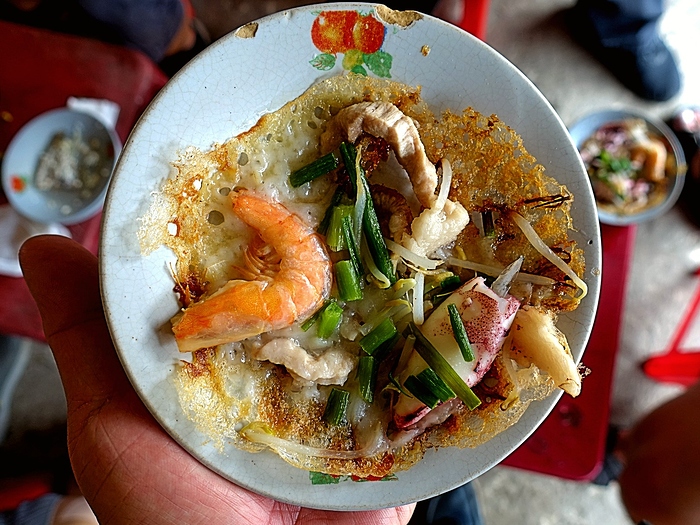 We bought fresh rabbit-fish, shrimps, baby squid and pork-belly from the market stalls nearby and passed them to the bánh khoai vendor to cook. She added beansprouts and scallions to the dish, as she cooked our breakfast for us. The bánh khoai at the market here - there were two competing vendors - were white in colour as the vendors eschewed the use of turmeric. 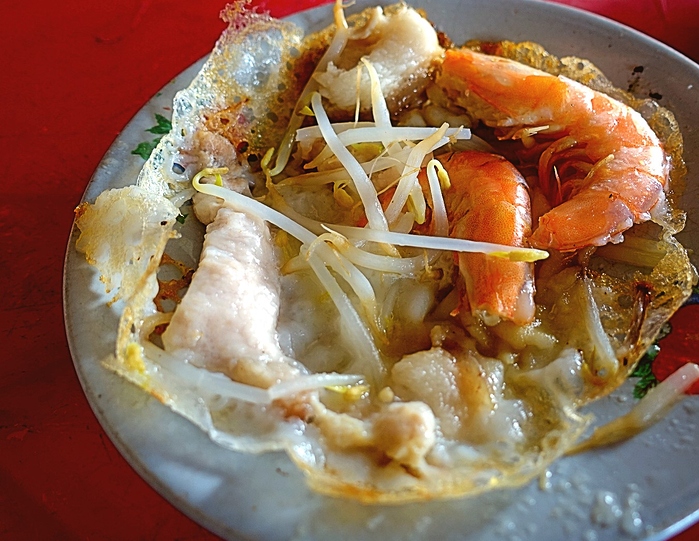 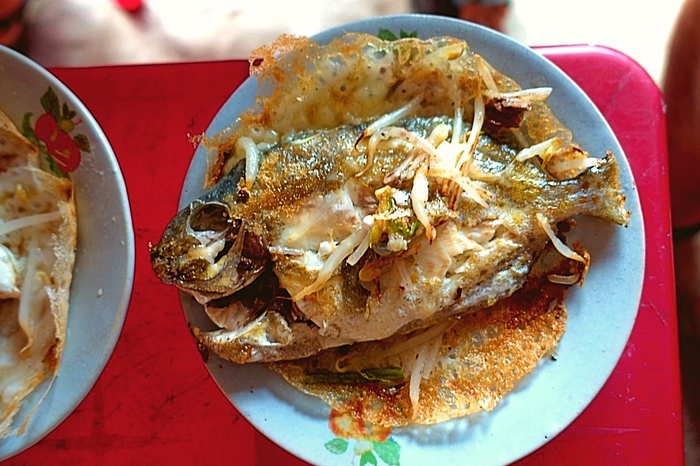 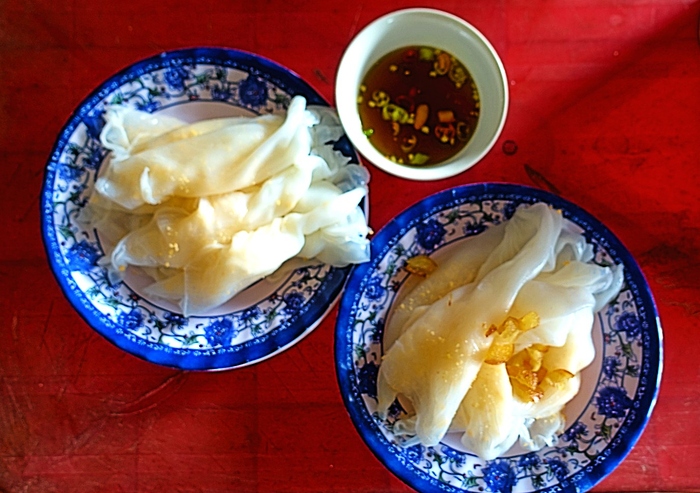 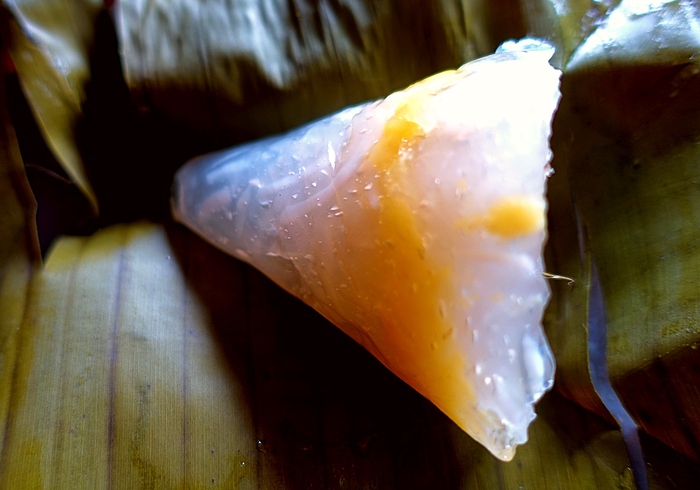 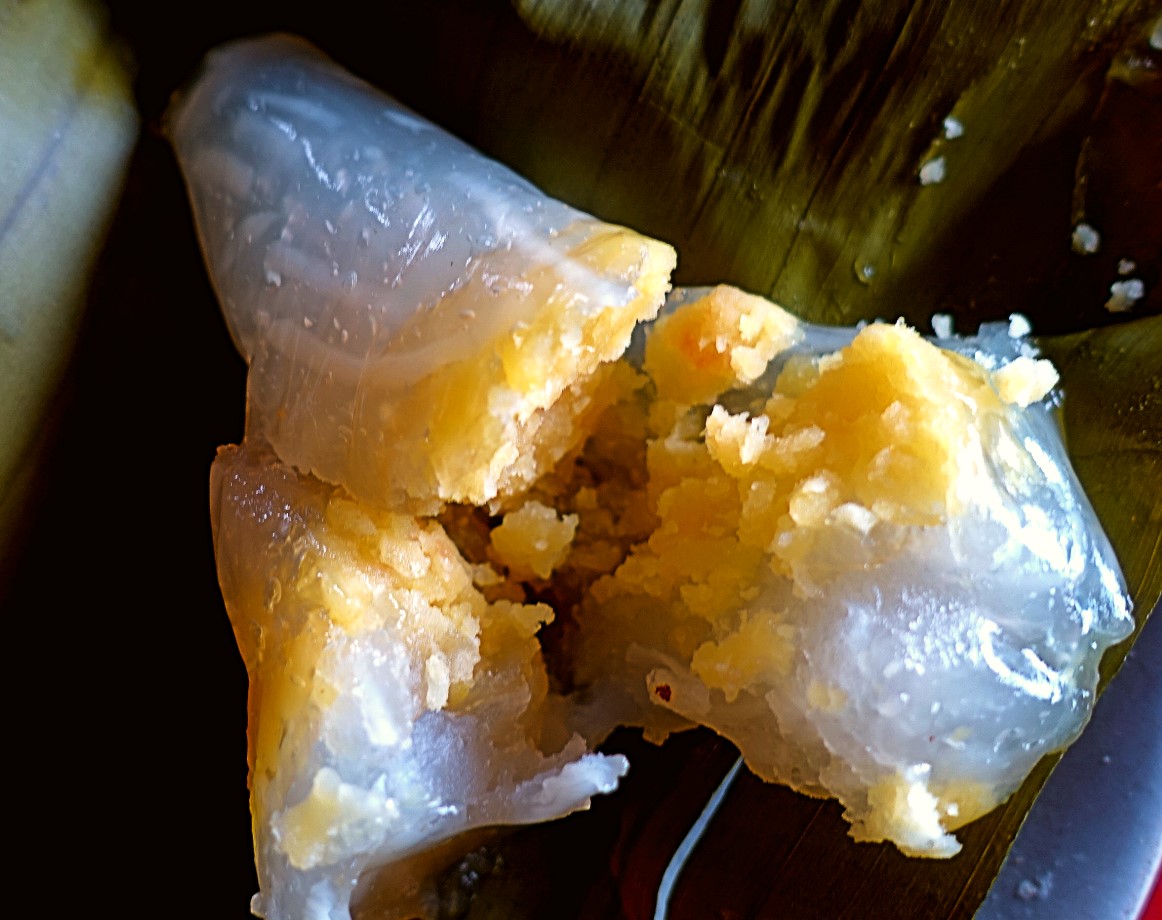 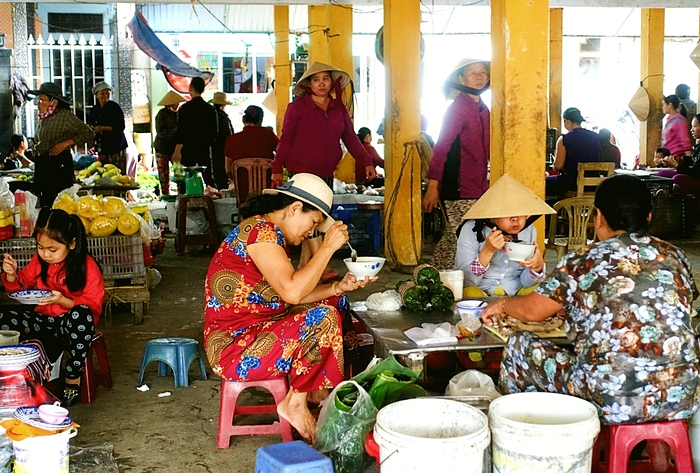 This is the Vietnam I want to experience again. Not all progress is good! Markets and roadside stalls were still “primitive” back in 2004. And in more remote places it’s very third world.

I always say it’s not possible to have a bad meal in VN.

Did you come across savoury “banh gio”?

No, I’d not on this trip, unfortunately. I can imagine how good it’ll be.

Yup! No truer words had ever been spoken.

Next, Chợ làng Chuồn ’s claim-to-fame, the bánh khoai , a crisp, thick crepe which is a Hue specialty.

Interesting… I tried to find a recipe of bánh khoai online, the visual is completely different from yours, a sweet potato cake, in this case from Hanoi. 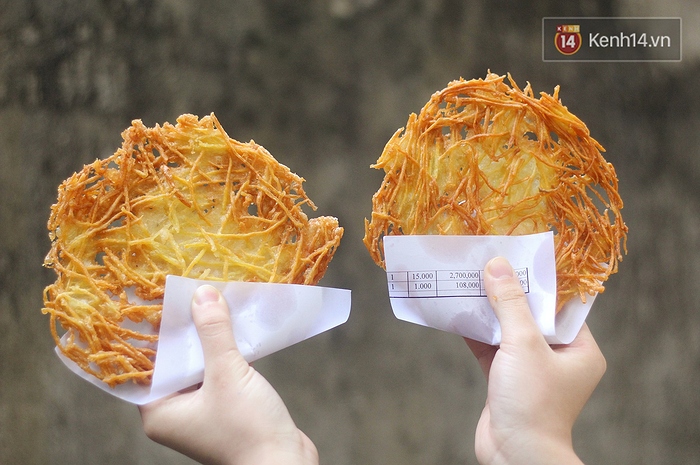 Only bánh khoái comes the crêpe. The difference is only the accent on the “a” of Khoái. Didn’t know accent is so important in Vietnamese. With French you can search without the accent, you can still find the same word.

Interesting… I tried to find a recipe of bánh khoai online, the visual is completely different from yours, a sweet potato cake, in this case from Hanoi.

Yes! It’s interesting, isn’t it? Google search also worked in such a way - it also tracks where the user is - that when I simply typed banh khoai from where I was in Hue, its resultant screen looked like this: 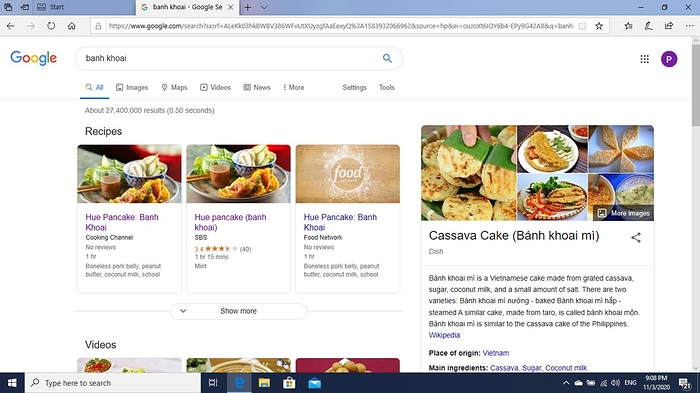 You can see that the recipe clips automatically defaulted to banh khoai as the Hue crepe, instead of the Hanoian cassava fritters, as it “assumed” those were what I’d likely search for, even if I was being inaccurate, accent-wise.

Back in Singapore, if I Google search for onde-onde, which are steamed pandan-flavoured glutinous rice balls filled with palm sugar and coated with fresh, grated coconut, I will get this resultant screen: 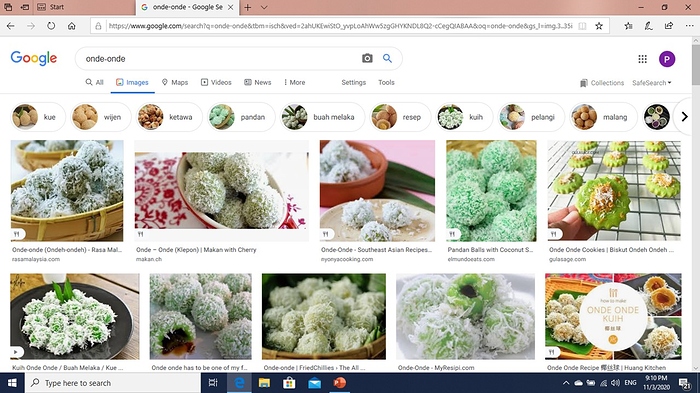 If I do the same Google search in Indonesia, where onde-onde refers to deep-fried rice balls filled with mashed mung beans and studded with sesame seeds (the Indonesians adopted it from the Chinese “jin dui”), I would get the following screen which, whilst I am back in Singapore, I need to type onde-onde Indonesia: 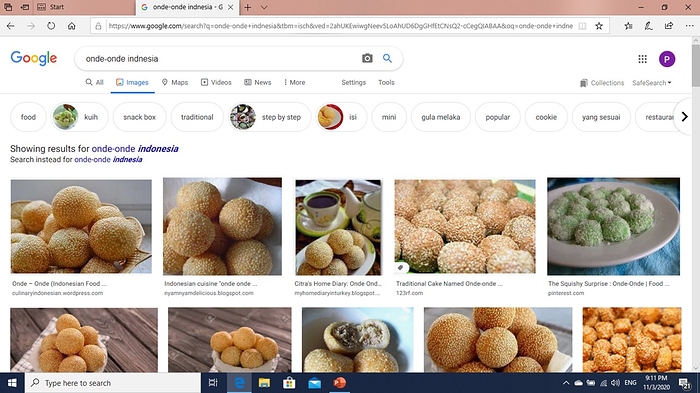 Anyway, if you Google search for banh khoai Hue, then you’ll see the sort we find in Hue, and which we understood is local to only Hue! 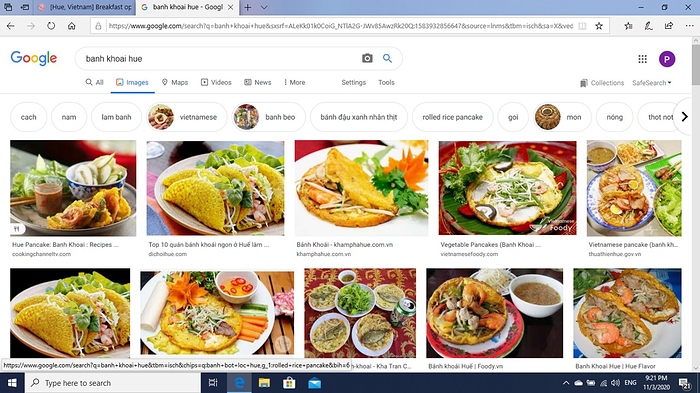 My first search was a cut and paste the term from your post bánh khoai = images of sweet potato cakes. I also noticed that with bánh khoai Hue, the result was the pancake you’ve mentioned here. Then I searched bánh khoai again (without Hue), the result was mixed, half pancake and half sweet potato cake. But with bánh khoái (with accent on khoái), 100% Hue pancake. I tried to listen the sound of both words “khoai” and “khoái”, there is a difference in Google translate.

You’re right about location affects (or anticipates) the search result. But in this case, it’s two different terms.

I tried, I have both! 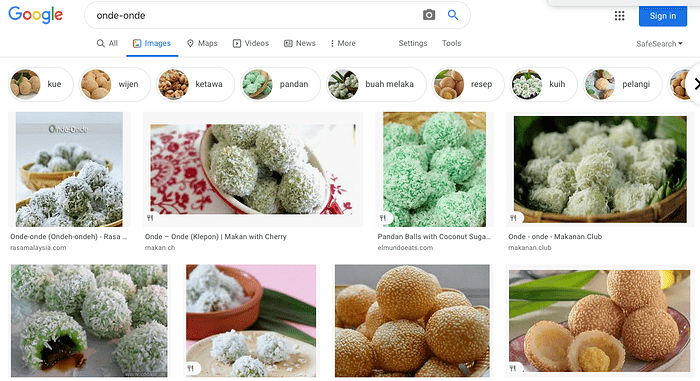 I tried, I have both!

And what we call onde-onde in Singapore and Malaysia is actually called klepon in Indonesia. Exactly the same stuff, but totally different names.