The list is not up yet, but I figured I’d start a thread for HVRW. They’re doing two price points this year for the first time ever, but they are only $5 apart, so I don’t really understand it, unless there were many places that said that they would not participate at $40 for dinner. They might have gotten some less expensive places involved had them offered a lower price point as well. Stamford does that.

In terms of news, I asked the CIA if they were participating and they will not be, but they’re doing their own deal starting in January. The Cookery is participating, but we were there last night and our waiter told me that they would not be doing weekends this time, which is a change for them. And in truly excellent news, Valley Restaurant in Garrison will be participating again (they have not for a few years now, even pre-Covid). We had an excellent dinner there a couple of weeks ago (they had a $55 price fixed meal for HV Shakespeare Festival, which is now located on their grounds since the golf course closed), and the food was excellent. We had not been there since they stopped doing HVRW. We didn’t have HVSF tickets, just wanted to take advantage of the deal.

During Restaurant Week, participating restaurants now have the choice to offer dinner at $44.95 and lunch at $29.95 or dinner at $39.95 and lunch at $24.95 (plus tax, beverage and gratuity for each) Restaurants can choose whichever combination of price points for dinner and lunch they would like. The menus must be offered for dine-in, but can also be offered as a take-out option if desired. Participants also have the option to offer their regular menus as the prix fixe.

as much as we love the cookery, given the way they’ve limited their menu, last year we decided not to go for the first time since they started participating . Will be interesting to see the valley menu, we stopped going there as well due to menu choices.

In any case, we’ll be away those dates, hope you have great meals!

as much as we love the cookery, given the way they’ve limited their menu, last year we decided not to go for the first time since they started participating . Will be interesting to see the valley menu, we stopped going there as well due to menu choices.

Yeah, we also didn’t do Cookery last time because of the limited choices. Maybe it will be better this time, with limited dates. But if they’re charging $45, it’s not that much different than ordering off the regular menu, so not worth it. That’s actually true at many places for dinner prices. And we pretty much stopped doing dinners last time because you can often find similar menus available at the lunch price, and since I’m retired I have plenty of time for lunches.

For the pre-theater menu at Valley, they had the sliced steak entrée that was $48 (!) on the regular menu and appeared to be the same portion size. So hopefully they’ll do decent stuff on the HVRW menu, although it’s $10 less. It was great seeing James and Daniel again. They both gave us a friendly welcome even though we had not been there in years.

We will be around the two weeks, but I am booked one of the weekends. Actually, it’s between two trips, so good timing.

It will be interesting to see who participates this season. There is a whole new crop of post-pandemic eateries out there, and I am sure they are looking for a booster. Let’s not forget that restaurants pay to participate in HVRW so they must at least make back their investment.

The fee is $800 per week or $1400 for the next two. And in theory, the fee is an advertising expense. The question is whether they make enough to make it worthwhile.

The list is posted and, as expected, very disappointing. In fact, even more disappointing than expected, since several restaurants have decided that the new “pick your price” policy allows them to charge $39.95 for lunch even though it’s supposed to be $24.95 or $29.95. The new website is terrible, looks nice but very tedious for browsing choices. Don’t try to pick multiple counties at once, apparently they treat as AND rather than OR when searching, so it comes up empty. Only good thing is that you can click directly on the Menu notation to see it. I used to do multiple restaurants a week. I might do a couple over the two-week period with the new pricing.

The Cookery doesn’t have their menu posted, but for $45 you can just go there any day and order off the menu.

Just browsed the HVRW website. Many dropouts from what I recall. Some new additions. Restaurant Weeks around the area have adopted this ‘pick your price’ structure’. Hard to put them all in the same corral, I guess. Glad to see Maria in New Rochelle is still participating.

If we were around, I’d pick X, X20 and take a look at the cookery menu.

Might be late payment rather than dropouts. I am OK with the different prices, I just have a problem with the $40 lunch when that is not one of the listed prices.

Apparently the $39.95 lunch is an approved price, since they do show that in the restaurant listings, not just the menus.

If we were around, I’d pick X, X20 and take a look at the cookery menu.

X and X2O are always good, but it’s the same menu as usual.

Cookery is not worth doing for $45, and especially not if you’re going to order one of the pastas as your entrée.

Zero Otto Nove is a possibility. They finally have the pasta in tinfoil (Mafalde In Cartoccio) without meat on the menu, at least in Tuckahoe. That’s the dish on their normal menu but for some reason, every HVRW they’d do the same thing with some sort of pork in it, which I do not eat. I never understood why. And lunch is only $25.

So, I’m obviously very disappointed in the $40 lunch pricing at many restaurants, and even places like Restaurant X that are only charging $30 offer that every day, so no bargain.

Here is where I plan to eat:
Harvest on Hudson - $30 lunch, seems to have a nice variety, and it’s regularly $40. We’ve never been here.
The Greek-ish in Harrison - $25 lunch. It seems to be the whole menu that they normally charge $45 for, or that’s what they told me when I messaged them on IG. Had a great lunch here a few years ago.
Valley (Garrison) - $45 dinner. As I mentioned, I had just eaten there recently, and it was excellent and their regular prices are very high.

We are meeting my son for lunch at The Parlor on the last day of HVRW because it’s convenient and celebrating a birthday, but may or may not do the HVRW menu (which isn’t posted yet).

Might do Peter Pratts’s Inn since it’s nearby, and we have not been there since they changed hands. $45 dinner.
Zero Otto Nove, the $30 lunch menu looks interesting.
Still waiting to see the menu at Willow by Charlie Palmer in Rhinebeck (although they are doing a $40 lunch and their normal lunch menu doesn’t evenlook that great).

Harvest on Hudson - $30 lunch, seems to have a nice variety, and it’s regularly $40. We’ve never been here.

A friend went for dinner recently and raved about it, but she’s fairly easy to please, foodwise. I’ve always found their prices a little hard to swallow, but perhaps we’ll give the $30 lunch prix fixe a go.

A friend went for dinner recently and raved about it, but she’s fairly easy to please, foodwise. I’ve always found their prices a little hard to swallow, but perhaps we’ll give the $30 lunch prix fixe a go.

Here’s their lunch menu. I’m a bit troubled by the “supplemental fees & some exclusions apply” wording. The supplements I see listed, but not clear what is excluded. Maybe I will send them a message. Also, there are enough choices that my wife and I will eat that even if stuff like the lobster roll are not included, we’ll be able to find something. Also, I just noticed that the artichoke dish listed is fried artichokes, so I’m definitely going for that.

Update – had lunch today at Harvest on Hudson, and it was very nice. Sadly, we did not get there until 1:20 (reservation was a t 1, but then their lot was full, and they were of no help in telling me that I could park in the 3-hour parking spots near the nearby park, instead telling me to part at a numbered Metro-North spot against the fence and then drive down to the meter to pay for parking. Took me a while to figure out that I could just park in the 3-hour spots for free. Anyway, they did not have any outdoor seating available, but we had an indoor table with a view of the river. We’d never been there before, the place is really nice, huge, and quite expensive.

The RW menu is quite extensive. Despite my disdain for $40 RW lunch menus, but my wife and I ended up ordering entrées with $10 supplements. She got the lobster roll (regularly $36) and i had the cod ($42). Both were very large portions. For appetizers, my wife had the shrimp scampi, also a large portion and regularly $24 and i had the fried artichoke dish, regularly $20. Dessert portions were small but we didn’t need anything large by the time we got to it.

In other HVRW news, The Parlor posted their menu, and it’s actually pretty good, with most appetizers and entrées/pizzas (including the Brussels spouts with Rice Krispies, fried chicken sandwich and an intriguing butter board) available at a $25 lunch/$30 diner price. I have a reservation for 4 there for the last day of RW, I can’t really see needing 4 appetizers, entrées and desserts there, so it will be interesting to see if they’ll allow us to order just 3 to share.

$10 supplement isn’t too bad for lobster roll/cod, especially if they were large portions. Maybe we’ll head over there this weekend…

I think they’re only doing lunch on weekdays. Not sure about dinner. Here are the entrée photos, BTW. 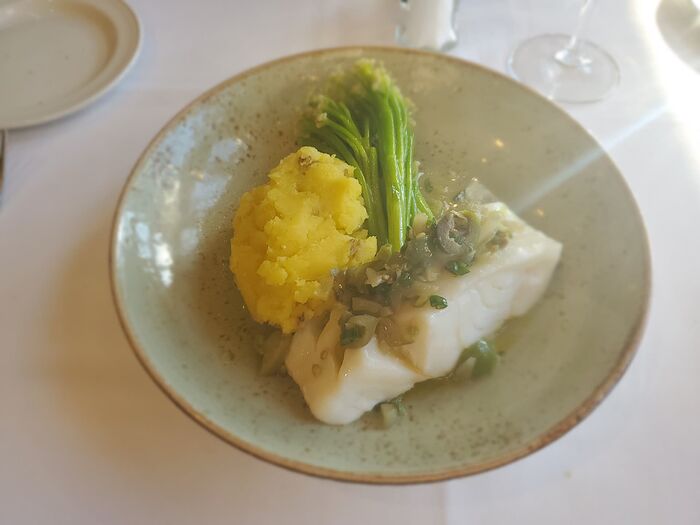 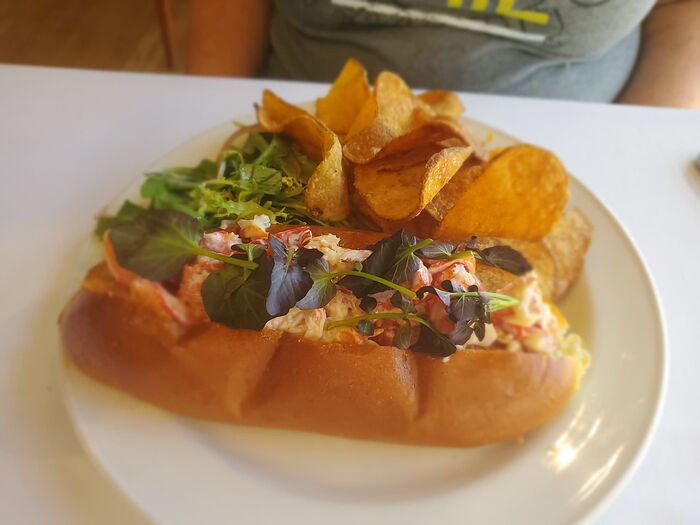 While at my doctor’s the other day, we got into a restaurant discussion. The doctor and his wife had recently had brunch at Peter Kelly’s X20 in Yonkers, and they raved about it! He described it as a great HVRW deal for $48.
We have stopped into Maria in New Rochelle and their HVRW menu looked extensive. We did not take advantage though and stayed with our individual orders. Love their Asian ribs, even the Maria salad. Their Baked Rigatoni dish is a classic!

While at my doctor’s the other day, we got into a restaurant discussion. The doctor and his wife had recenly had brunch at Peter Kelly’s X20 in Yonkers, and they raved about it! He described it as a great HVRW deal for $48.

Where’s the SMH emoji when you need it?