I have reviewed Huck’s Tavern once before. It was a culmination review based on many visits with my parents that included mainly stops for drinks and snacks, and one actual meal. I have always enjoyed my experiences in the bar/restaurant inside the Fulton Steamboat Inn. It is still my favorite hotel to stay at in the Lancaster-area. The woodwork in the bar itself is beautiful, and a combination of Victorian and nautical themes mimic the design of the hotel. I had wanted to take Justin there for a quick drink before we went to dinner. Well, this may be the last time I ever sit at that bar.

There was one table taken when we walked in. A family of four, with their two kids running from one end of the room to the other, screaming. Perhaps that is why no one else was in there at that particular time. Anyway, we had a seat at the bar and waited. And waited. And waited. We were there probably 15 minutes before the bartender arrived, not from behind the bar or the kitchen, but the entrance-way. Oh well, not too big a deal. I ordered a Bulleit Rye on the rocks while Justin asked for Irish cream and butterscotch schnapps (peculiarly known as a “Buttery Nipple”) on the rocks.

I watched the bartender make our drinks. The pour of Bulleit was barely held for three seconds, with the ice piled high. Cheater ice, you could call it. The pours on Justin’s drinks were not much better. We put in an order for the fried mozzarella appetizer to get some food in us. Since this was vacation, I told myself not to be annoyed. A second round was ordered. 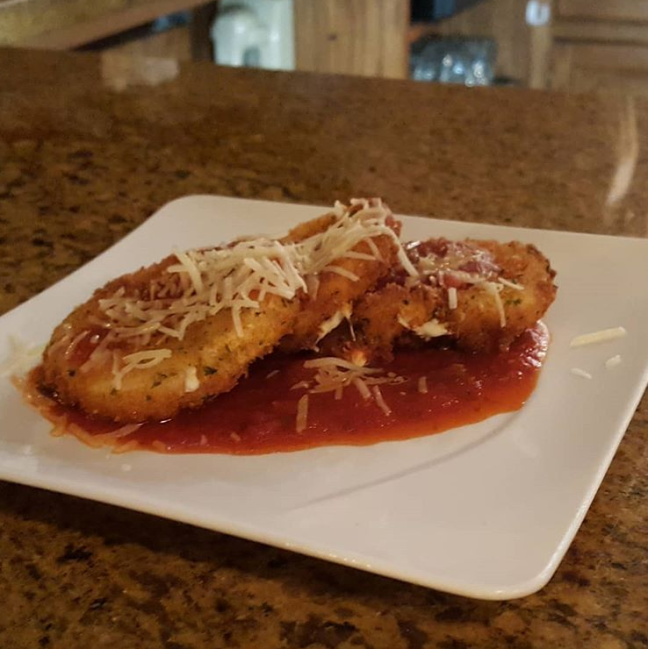 The appetizer we had was well-made. The mozzarella appeared to be fresh, not processed. It was fried to a crisp, but did not have the temperature I was looking for. But not a disaster. We asked for the check and he put it down. Justin grabbed it, and I saw his eyes widen. I took a gander and did a double-take. “Did I just read $49?” I said silently to myself or out loud—I don’t remember. His drinks were $10 each. My Bulleit was $9 with an up-charge of $2.25 for rocks, bringing each to $11.25. I have seen upcharging for rocks before. While this practice is frustrating, it is becoming a mainstay in almost all bars and restaurants. Still, the highest of such charges I have ever experienced is $1.00, maybe $1.50. To put into perspective on how ridiculous this bill at Huck’s was, read my review of Vic’s from yesterday. Virtually the same amount of money garnered us a pitcher of beer, three whiskeys on the rocks, two meals, and an appetizer. To give another example, a Johnnie Walker Black on the rocks at my beloved and very expensive Cafe Bella Vita on Staten Island is $10.

“I always ask for the price. Figures this was the one time I didn’t” Justin said, with an air of disappointment. My previous review of Huck’s was 3.5 stars. I had even toyed with awarding 4 stars. However, this past visit leaves a sour taste in my mouth. I have no choice but to give them a 2.5 out of 5 stars . It is only this high because of atmosphere and the appetizer was good and adequately priced. I felt robbed leaving here. They have no business charging that much money for ice unless they are going to give an extra ounce in their pour, something they obviously did not do.

For $2.25, that better be some seriously good ice.

The Philadelphia Inquirer had an article on ice in cocktails a few weeks back, but I don’t recall any mention of an upcharge for it. Ice can be a bartender’s secret weapon

You may never look at an ice cube the same way again.

They failed me too, believe me.

Wait…serious question here. They charged you money for some ice? It appears that way

At least when The Globe charges $1 extra for rocks you can tell there is more booze in the glass.

That is nuts. I would have walked out

I would have considered some form of belligerence, but it was the hotel I was staying at

Yeah, that’s strange. At the places’s I’ve tended bar there was an extra charge for on the rocks, but you got an extra half of the standard pour. In a place that measured, it would be 1.5shots instead of the standard single shot. The upcharge was in some way proportional to the price of the spirit.

I wonder if their POS system is set up so that rocks is actually entered as ice. Regardless, they clearly didn’t give you the extra pour as evidenced by your watered down drink. Either a clueless bartender or a terrible policy from the restaurant.

Either a clueless bartender or a terrible policy from the restaurant.

I’ve stayed there many years. The prices have always been steep, but they seem to go through bartenders like crazy. They only had one bartender, maybe two years back, that provided quality pours.