How Rev. Moon drove the surge in U.S. sushi restaurants

This is long, and somewhat annoying - I found it worked best just to use my down cursor, rather than my mouse or PgDwn key, but YMMV.

But it is FASCINATING. Who knew Rev Moon was so crucial to the rise of sushi acceptance in the US?! 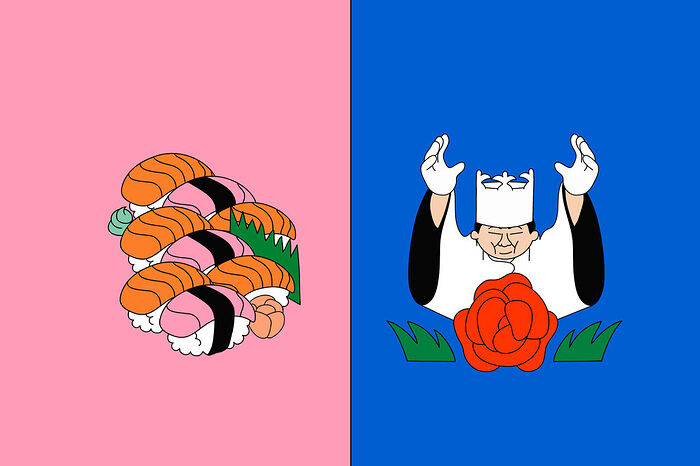 The Untold Story of Sushi in America

How a controversial religion from Korea quietly built an empire of raw fish.

This opened without the annoying paywall.

I found the link between Moon and Sushi unconvincing:

Would such a company never have come to be without Moon? Sushi was already becoming popular before this – I first had sushi in a restaurant on Long Island before this incident and it would not have taken long for someone to mass-market it, Moonie or not.

Separately, the article talks about “before” times when Americans did not know what omakase is. I’d argue that we’re still in those before times. Most people who grab a tray of sushi at the supermarket, or – more frighteningly – at the local convenience store or drugstore won’t know their omakase from their uni.

In the 1980’s my friends who lived near Gloucester, Mass told me the Moon organization was muscling in on the fish/ shellfish business, squeezing local fishermen out. That was the spawn, it seems, of this heretofore unknown vertically integrated seafood/sushi business they have constructed. I know many people will shrug and keep ordering from their favorite places, supplied by True World. Probably me, too. Oh, I also recall the rumor they took over Entemen’s cakes…

Would such a company never have come to be without Moon?

I don’t there’s anything in the article to suggest that, but it’s like saying “Wouldn’t someone have patented the light bulb without Edison?” Probably, but it’s still okay to note the Edison connection to light bulbs.

You’re quite right, as mostly, but here are a few comments:

My comment was based solely on the connection between Moon and Mass-Market-Sushi. Did M cause M-M-S (as I allege the NYT alleges), or did M-M-S happen organically, independent of M, as I allege?

A] Edison invented the light bulb. The light bulb proliferated.
(Had he not invented it, others would’ve, maybe later. True dat.)

B) Edison mass-marketed sushi (not invented it). Mass-market sushi proliferated.
(Had he not, others proliferated it, at the same time. True dat.)

Should Eddy get credit for scenario B?

Totally off-topic: I find the increasing straight-jacketing this board imposes on how you may format posts increasingly irksome. But I’ll take that up elsewhere.

But he did patent it, and he was largely responsible for its commercial success. In that respect, he’s actually pretty similar to Moon.

And here’s the causation part - Moon was able to command an army of sushi-popularizers, which he was in a unique position to do. It’s certainly possibly - likely, even - that mass market sushi would have happened without Moon, but probably not as quickly or as ubiquitously.

We could spend happy hours/days discussing what it means to invent something – there’s always a precursor to everything – but that would drag us away from the task at hand:

A) Was Moon responsible for mass-market-sushi, in the sense that it would’t have happened without him?

B) Was Moon incidental to mass-market-sushi, in the sense that it would have happened without him?

I vote for B, but I realize that others may disagree. That’s all I have to say.

Why bother, when it’s settled fact that Edison did not invent the light bulb?

And I think I’ve been pretty clear about your A and B scenarios. You can just scroll up and read what I wrote.

it’s settled fact that Edison did not invent the light bulb?

Such certainty from someone whose knowledge of the history of technology is so small.

I edit to apologize: We need to keep this on Moon and Sushi, not on misunderstandings of misreadings of misrepresentations on the Internetagrams of the history of technology.

Such certainty from someone whose knowledge of the history of technology is so small.

You don’t know anything about me. And you’re obviously terrible at research. Your apology is not accepted.