How do you prefer your steak made - flavour wise ?

It was a huge struggle in some meat-eating countries I visited (Argentina, Chile, Namibia). I had wanted to show them a photo of a steak doneness chart in my wallet! It didn’t matter how much I stressed how I wanted my steaks ( describing the texture, colour, juiciness etc) to be cooked, it was simply not possible to have them cooked very briefly, in my case, rare.

The tender cuts are mostly consumed by tourists. People in those countries I mentioned eat the rest of the animal and the bbq’ing is an all day event as the tougher parts take much longer to cook. They really eat from nose to tail. 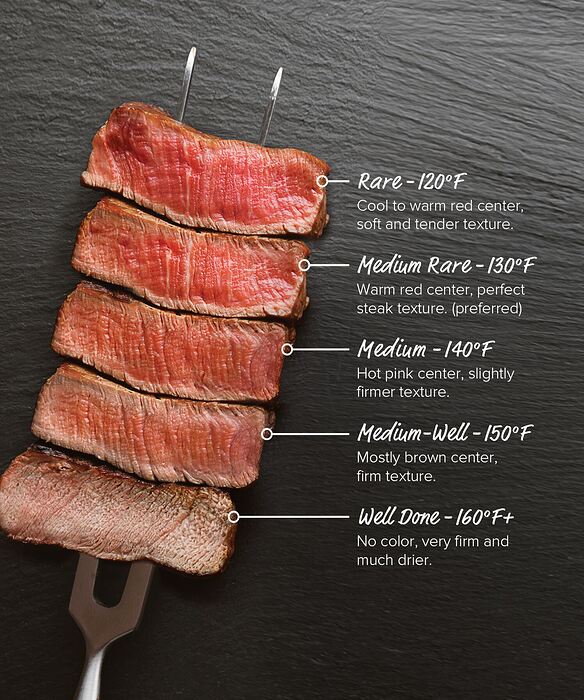 Pluma is a very fatty Iberico pork cut, here it comes with a disk of foie… 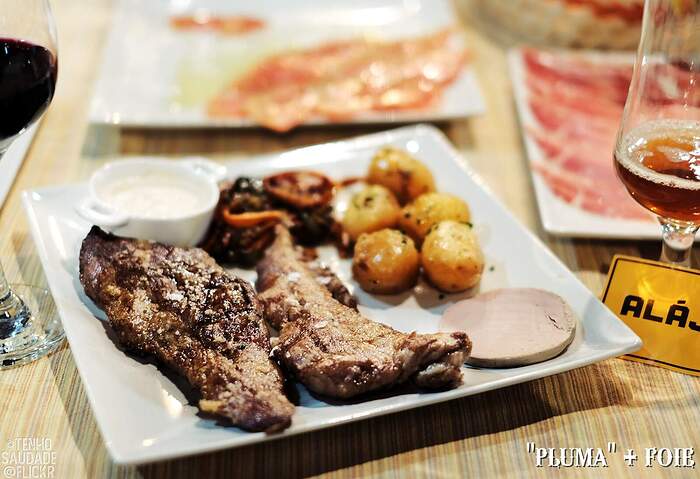 In Hungary I had beef steak with foie gras. Hungary is the world’s biggest producer of goose and foie.

And to answer the original question: if it has to be steak* it must be rare. I like to eat it with smokey Mexican chillies in olive oil and a sprinkle of good salt. (I have lots of Mexican chillies!)

(*) Otherwise, I prefer tough/slow-cooking cuts above all.

Not sure if I agree with this picture. In my world, rare is a deep red throughout, looks uncooked if it’s bleu, which means just teased on the grill.

My medium rare is a lot redder in the middle. In fact, I would say this photo’s medium rare looks more like my medium-well.

I worked 15 years for the French government, and the default was bleu, with just a singe on the outside. If you asked for medium, they would keep it on the grill for just a bit longer, and it would be most American’s version of rare.

My other steak love is steak frites. My preferred cuts are hanger or skirt. Salt a screaming hot large carbon steel pan and toss in hanger or skirt. Put a few pats of butter on top. Flip it twice. Pour in a decent amount of red wine. Pull the steak to rest. Keep it rare. Turn down the heat and add a good bit of salt and pepper. Make a red wine reduction. Slice the steak and serve it in a soup plate with hot fries, home made mayonnaise, and wine reduction poured over the meat. The last few bites, steak or frites with a mixture of red wine reduction mingling with the mayonnaise, are the food equivalent of crack.

I tend to stick with just a healthy sprinkle of salt and freshly ground pepper. Seared in a stainless steel pan with butter and olive oil, or on a grill pan after lightly oiling the meat pre-seasoning, and depending on the thickness, finished in the oven to medium rare. A drizzle of a favorite steak sauce on top (Ballymaloe steak sauce).

If a tougher cut of meat, I’ll marinate in a combination of oil, dry red wine, teriyaki sauce, minced garlic, brown mustard, and Aleppo pepper. Or this Firecracker marinade from Country Living Magazine.

Try our snappy Firecracker Sauce with grilled shrimp or chicken, too.

At home, seasoned with salt and pepper, hot but not too hot stainless pan. I prefer the stainless, as I rather do the pan sauce in that instead of iron pans. Oven finishes are rare for me, but I don’t often have super thick steaks. Usually no butter basting. I like to put the butter in the sauce or on top of the steak when plating with some garlic, salt and more pepper for example.

Otherwise I like steaks done on charcoal, the bbq aroma it adds is so good, but I have used a gas bbq out of convenience instead. In restaurants also some of the best steaks I have had have been done on charcoal.

99 out of 100 its beef tenderloin. So I sear on the stove with salt and pepper then baste in butter with whole garlic, fresh rosemary, and a hint of prawn. Finished in oven.

Grilling is simply mixed spices like a Montreal seasoning over hot hickory. Then as it rests top with a plat of butter and a couple prawns.

We were apprehensive about bien cuit for medium rare, so we went with a point.

I’ve seared filet mignon and finished it in the oven with a mild goat cheese on top. It was a very nice treat.

I think you’re right. I just took some pic from the internet, but indeed bleu should be more red.

I think its just the way the light is hitting the meat when the photo was snapped.

I was disappointed with sous vide any cut other than tenderloin … and not overly thrilled with that unless cooking for a large table of carnivores.

I agree with the temps.

I default to salting about 12 hours before I’m going to cook for thick steaks or at least a few hours before for something thinner like the cap off of a whole rib roast. I either add granulated garlic just before cooking or top the finished steak with garlic compound butter. Rarely pepper anymore - I let family/guests pepper at the table if they wish and especially on the grill it can lend a bitter note.

About the only steaks I cook anymore are bone-in ribeye (these are very thick - and only the eye portion of the muscle because I remove the cap from the roast), the rib cap itself, and beef tenderloin. I also love picanha but around here between about 2016 and 2019 the price went up nearly 70% as people “discovered” it, so I buy it less often. My local grocer will have the whole rib roasts and whole tenderloins on sale about once a quarter but picanha’s never on sale.

Whether pan-searing with oven finish or grilling, other than the rib cap, I’m going for medium rare. The rib cap is very forgiving and medium rare, medium, even tending toward medium well is fine.

If most of the family is home I have to cook on the grill due to space considerations. But either way I go for a fairly good seared crust then indirect heat (in oven or away from the flames in the grill) to finish it off. If in the grill, just a little pear wood smoke during the finishing is a very nice addition to beef (and lamb and pork).

For picanha I pan sear the whole muscle then oven finish, give it a good 15 minute rest then thin slice against the grain.

Seared in a salted skillet. Topped with (cooked in a separate skillet) garlic/butter sauteed sliced mushrooms.

Brought to room temp for at least several hours, then seared and multiple flipped until rare. Rested 10 minutes. Bearnaise sauce on the side.

Bavette or ribeye, sous vide to 130F, then a very hot sear with my sekrit rub (ancho chili powder, garlic, oregano, garam masala) and salt. I also like Montreal seasoning.

Brought to room temp for at least several hours,

Why do you let the steak rest for several hours, at room temperature before cooking, as opposed to just a half hour ?

Because I live in San Francisco and my kitchen isn’t warm
.