Interesting read from Gastro Obscura about the history of aspics and, yes, Jello in America.

Some real wonders here, including a description of a jelled salad that will ensure you’ll never be asked to bring a dish to a potluck ever again. 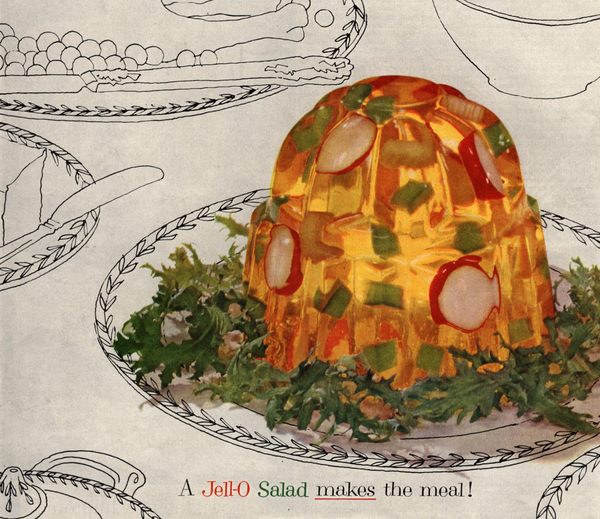 From futuristic test kitchens to Under-the-Sea Salad, midcentury Jell-O took a turn for the weird.

Have you found this? Horrified fascination…

Repeating my mantra, “There are no bad foods, only bad cooks.” I’ve have some sublime lightly gelled spoonfuls, oysters in champagne, and certainly I kill for DeBadger’s headcheese. French Jambon persille is a wonderful dish. Jellied veal tongue or pot de feu are treats, All of these depend on a superbly flavored stock. Vegetable broth Jello is not going to cut it.

that site. So many hours of silly fun.

Mom made a version in her meat loaf pan that used the hocks for binding collagen and chunky bits . . . and we remember chicken livers in the mix. Genuinely genius-quality good stuff.

My offspring was fascinated to find that the braised beef cheeks I made last week had solidified into a block of unctuous jello, and that I was pretty proud of it.

A few weeks ago I found this guy on Youtube doing a series on food from the RMS Titanic menu. Never in my life had I considered the idea that first class diners would be eating peaches and chartreuse jelly. The rest of his series looks pretty interesting, but I haven’t gone back to look. https://m.youtube.com/watch?v=7hYBesohRK0

Kind of spit out my beverage when I read that.

I’ve noticed that, even though many cultures have a version of head cheese, the subtle differences are big deal between the German Version and Norwegian version, and on and on. I know an alder Norwegian who was disappointed with the butcher shop’s head cheese. The butcher is a German fella. So, a local Norwegian grandma made him some. “Oh, dat’s just riiiight.” Little things mean a lot.

Yup. Commercially, there are two kinds of head cheese “loaf”, one sour, the other not. I like the sour version. I think that that one is German, the other French. French is okay if you are going to douse it in a good vinaigrette.

Big fan of sour. That’s the version I was raised with. But, I did try the Norwegiancheese, and I really did like that, too.