This is just the intro article.

So let’s take this opportunity to share some our our favorite seafood places and/or dishes.

As you may know, (and as I mentioned on Chowhound once or twice), I’ve been eating sushi at least once a week at Sushi Jin for almost a decade. Seriously.

They have some of the best fish week in and week out and for sure, the best bites of sushi I’ve ever had have been there. Lately, they have had superb blue fin and chu-toro. Really outstanding.

Again, as I’ve noted before, my mom loves Capt Benny’s and we’ve been going there at least once a month for a while now. She likes their gumbo, (both kinds), and jumbo fried shrimp platter. really good fried shrimp and to-die-for spicy hushpuppies. Good cold beer doesn’t hurt.

I don’t do a lot of “fine” dining so I can’t speak to Reef, Salt Air or Peska, but I bet some of you guys can, so dish.

I’ve been going to Capt. Benny’s since the early 80s and I always … Wait a minute. They have two kinds of gumbo at Capt. Benny’s???

This is one of the few places I go where I pretty well know before I leave the house what I’m going to eat and I haven’t really looked at the menu in long time. Too many times to count I’ve gone for the oysters on the half shell, cold boiled shrimp, cup-a-gumbo (seafood) and butterflied whole deep fried catfish. I’ve also had the crawfish piroque on occasion and oyster poboy,… Wait a minute. They have salads, soups and a children’s menu???

Capt. Benny’s has changed a lot, not only from the early 1980s but from the original on S. Main that just offered raw and fried oysters and shrimp and catfish, beer and iced tea, in a real shrimp boat hauled up from the coast with a hole cut in the hull for a door.

They also do good fries, golden, not golden brown.

I also like Mar Azul on W. Bellfort. Jaymes turned me on to the Mojarra there - I always get it al Diablo. And of course the Vuelva a la Vida… which reminds me I need to get back over there and try it while it’s still oyster season.

I’ve been to Lotus Seafood Mkt on S. Braeswood, which Katherine Shilcutt has called the best catfish in the city. I don’t agree, but it’s closer than Capt. Benny’s (I prefer the location on S. Main to the one on Murphy closer to me). I’ve never tried the Loud Pack that is supposed to be their specialty; I ought to do that.

So let’s take this opportunity to share some our our favorite seafood places and/or dishes.

Good idea. We’ve had some good discussions ‘over there.’ I see Tommy’s mentioned in the Houstonia articles, one of the favs of Texas Red Top as I recall, and Danton’s - Lambowner, you out there?

And jcostiones should have something to say about where to get fresh seafood.

Speaking on the “old school new school article,” I went once to Christie’s and it was worse than bad, so I never went back. Only one other table was dining at a lunch on a Saturday.

I used to go to Connie’s on airline back in the 90s, I need to get back over there. I have very fond memories of what my crowd just called the Mexican-Chinese-Seafood house, because there was always fried rice and a grilled jalapeno on the plate.

I can’t even believe Landry’s is on this list. I know who DIDN’T author it.

I like Danton’s a lot, though they tend to over cook the fish. They are not alone in Houston in doing this. Reef’s snapper on the half shell is always dry.

I was not impressed with Bernadine’s and would never return to Caracol after the disastrous birthday I spent there and wrote about on Chowhound, but I adore State of Grace.

Other locations I like: Laurenzo’s has a lot of saucey fish on their menu. You can select from a number of sauced toppings. Miyako is back with a new opening on Washington and it is a long time favorite for sushi ( also like Sushi Jin). McCormick and Schmick is a complete loss in my opinion. I like Veracruz on Irvington. Make that “liked.” I just looked them up and they have closed after decades in operation. I will miss it. Not to be that broken record, but I really miss Denis. Where else in Houston can you select fresh fish from a list on the chalkboard and have it cooked your way and not too much? No seriously? If anyone knows, please share.

I just got an email from Danton’s that their crawfish menu is out. Now what’s for lunch? Connie’s or Danton’s? What are you having for lunch today?

Last week I had this most delicious trout almondine at Mandola’s, perfectly cooked: 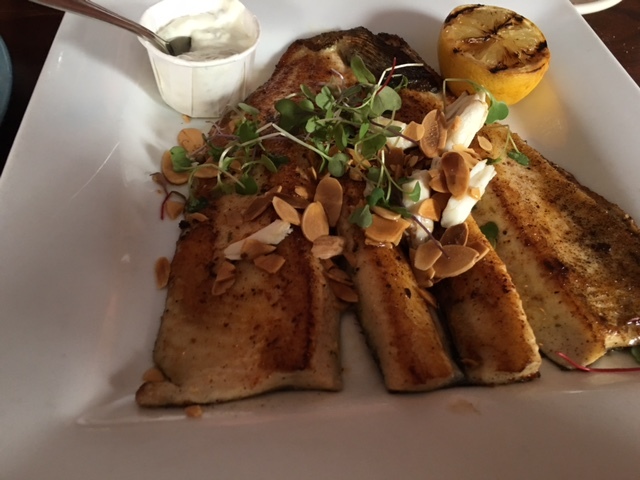 've been going to Capt. Benny’s since the early 80s

I have never been! What is wrong with me?!

LOL. Good critique. There used to be a Christie’s on Main, near the Med Center, and one on the west side of Bellaire; I went to both in the 70s and remember as pretty good - not as good as Gaido’s, Kaphan’s, Dentler’s Pier 21…

I went to the sole remaining place on Westheimer about a dozen years ago and had fried oysters. They were NOT over cooked - amazingly. I was impressed by that fact but it was not my type of place and I never went back.

Overcooked seafood is par for the course around here imo, especially fried oysters, but I’m surprised by your comment on Reef.

I must get to Danton’s AND Tony Mandola’s.

What are you having for lunch today?

I had a Chicago Style Hot Dog from Chicago Italian Beef on Airline!

I ended up with Guatemalan take-out, sorta. Pollo Campero.

not bad but I was sure in the mood for Connie’s.