(Honolulu, HI) A Review of Sushi Sho at The Ritz Carlton, Waikiki

Regional Dining Discussions All other US, Caribbean, Americas
BradFord November 14, 2016, 9:23am #1

Reporting back from my recent trip to Honolulu…

Keiji Nakazawa is a vertiable sushi legend in Tokyo, and our meal in his new Honolulu location was a masterclass in technique and his creative but balanced style.

Sushi Sho just opened in the new Ritz Carlton, Waikiki about a month ago, but this branch has been in the works for over 2 years. During that time, Nakazawa-san and his talented team studied the local ingredients, and the result is a menu that seamlessly integrates elements of Hawaii with traditional Edomae sushi and their distinctive, creative style. This restaurant is ostensibly Sushi Sho but also uniquely expressive of its location. Sushi is presented on Big Island koa wood “geta,” which rests flatly on the gorgeous Japanese hinoki (cypress) wood sushi bar. The 10-seat bar is a facsimile of that from the original Yotsuya location, but the impressive wood relief carved refrigerator behind it imagines Hanaya Yohei, the storied pioneer of Edomae sushi, fishing for local Hawaiian Moi (the “king’s fish,” pacific threadfin). Moi would later make an appearance as nigirizushi, in a unique preparation with nods to traditional Japanese preservation techniques. But Sushi Sho isn’t just safeguarding tradition; they’re writing a new chapter in the history books of sushi in America.

The sushi is expertly crafted here with textbook knifework and hand-pressing. The rice is noteworthy: “nebari” is was excellent - a product of not only their strong awasezu (seasoning vinegar for sushi rice), but also the deft hands of the sushi chef Taku-san, who himself has a 2 Michelin star sushi restaurant in Tokyo, Sushi Taku. A new edobitsu of sushi rice is summoned for virtually each new piece of sushi prepared, so the rice is always at the proper temperature.

That’s because the sushi is interspersed among various otsumami, which could just as well be the forte here. The offerings are diverse, and the meal is more than just sushi. The otsumami are uniquely Sho - like lobster marinated in its own “miso” (head innards) and xiaoxing wine, paired expertly (off the cuff by Taku-san, who is also a sommelier) with Kokuryu’s “Ryu” daiginjo (layered and crisp with a dry, flinty finish that was the perfect complement to the slippery, sweet, and near offal lobster). Just as the meal weaves between nigiri and otsumami, it also balances Japanese classics with foods evocative of Hawaii. Sushi Sho’s old-style signature “ika no inrouzume” (squid roll stuffed with rice) appears with Hawaiian hearts of palm. There is “Poke 3 ways, Sho-style” of banana leaf-smoked salmon, local onaga with black salt, and ahi tuna with mustard and Maui onion. The dish of the night for me was warm salmon “Lau Lau, Sho-style,” wrapped in opah kama and luau leaf, accented by with bright “tosazu” gelee and atop a warm asparagus veloute. It looks almost like a gunkanmaki sushi, presents classic Western flavors (salmon with asparagus), and is a unique interpretation of an iconic Hawaiian dish. It is the pitch-perfect bonito vinegar gelee, however, that sealed the deal, by bridging the asparagus’s astringency with the sweet, rich meat of salmon and opah cheek. There are 3 textures, 3 temperatures, and 3 cultures represented here, all in beautiful balance.

The rice’s vinegar is notable, refreshing even, and at times providing a subtle reset between some of the stronger prepared dishes. The meal presents an interesting progression of contrasting textures and flavors, and the orchestration of otsumami in between nigiri worked well (most other places, like Kusakabe in San Francisco, are much less successful in my opinion). After the luscious “Lau Lau,” there was crunchy mirugai with Maui onion, followed by soft kasugodai (baby snapper) sprinkled with iri tamago soboro (vinegar-cured crumbled egg yolk). Lobster fermented in its innards and Chinese rice wine was followed by Moi, which acted as a palette cleanser of sorts, with its strong aged flavors (in kojizuke for 6 days, flash marinated in shoyuzuke, and topped with aged kelp). The exceptionally bright finger lime atop grilled opah belly lingered in the palette to match the following richly flavored sanma (pacific saury). It should be noted that while the rice’s texture and nebari remained very consistent, the awasezu was deliberately varied depending on the type of topping. This is another reason why I think the nigiri and otsumami are alternated, since a new serving of sushi rice is requested to match a specific type of fish.

Later in the meal, comparisons were even more discernible - a back to back duo of akami (lean bluefin tuna) from Boston and Oma, Japan (there was no comparison, really). Then, 10-day aged senaka akami from Oma (the best cut of lean bluefin tuna, from the back) that was the perfect marriage between fish, rice, and wasabi, because the qualities of each became so vivid, especially after just tasting two varieties of fresh, lean tuna. Santa Barbara and Hokkaido uni followed, then two types of tamago presented side by side. On the left, a Tokyo-style “kasutera” (castella cake) of local Poi (taro mash) and shrimp; on the right, a Kyoto-style “dashimaki” of eggs and shellfish broth. Perhaps the juxtaposition of the two may also be a metaphor of what Sushi Sho is accomplishing with its Honolulu branch - the Tokyo style kasutera style cake representing the “new,” with its infusion of Hawaii, and the Kyoto style omelet representing tradition. Sushi ended with Sushi Sho’s signature pieces: ankimo (monkfish liver) topped with with nara zuke (pickled baby watermelon, aged 3 years) and “ohagi” / “torotaku,” a minced toro tartare of sorts mixed with pickled daikon and Maui onion. Both contrast luscious and rich, creamy topping with crunchy pickles. A warm suimono (clear soup) of mebachi maguro (local bigeye / ahi tuna) and negi was comforting, while the iced dessert of kudzukiri (arrowroot ribbon noodles with kuromitsu, a caramel-like black sugar) was a refreshing ending to the ~30 course meal.

Sushi Sho is doing something very special here in Honolulu, and it might be the most unique sushiya in America. 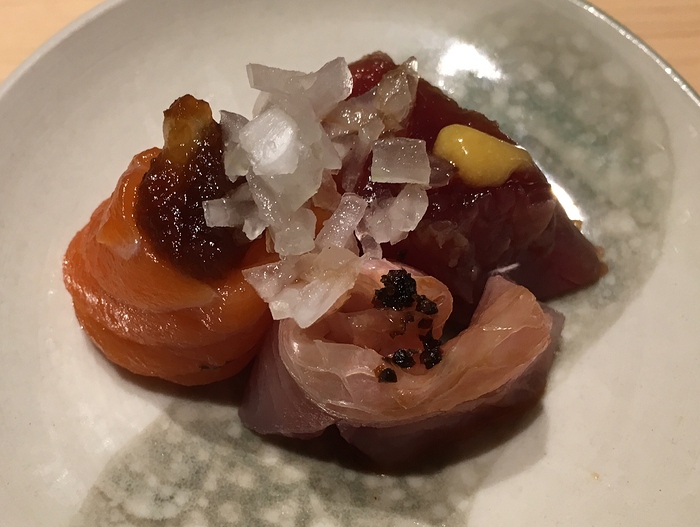 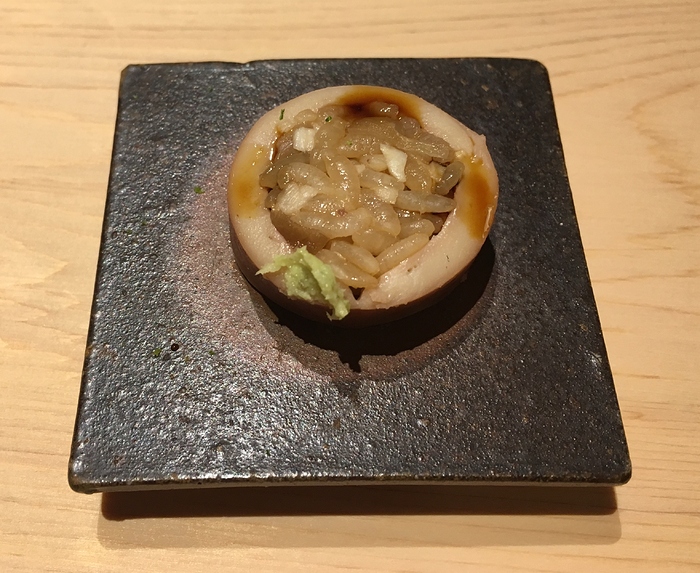 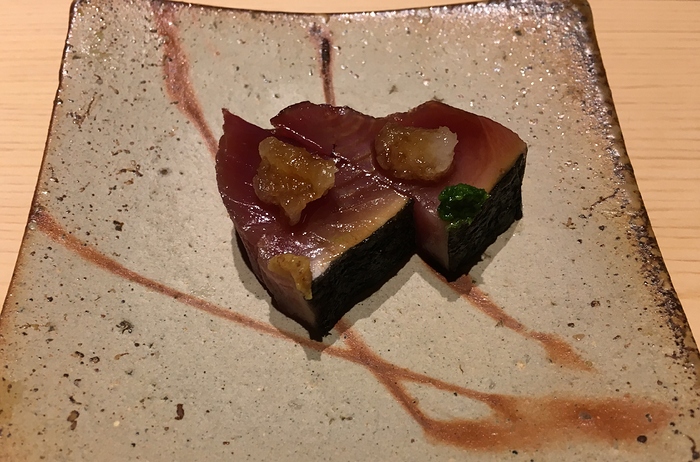 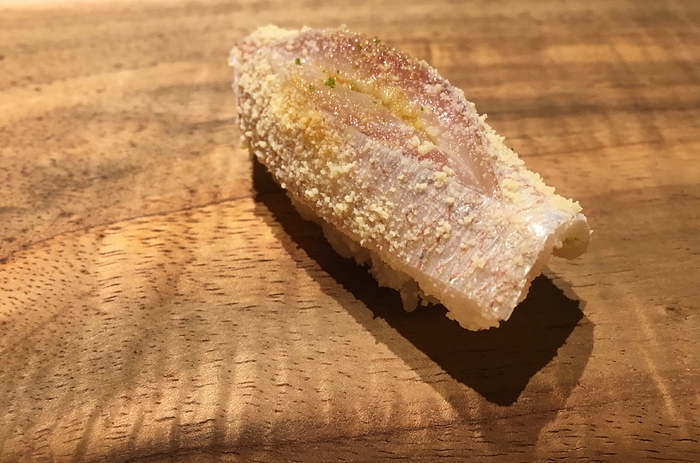 Lobster fermented in its innards and Xiaoxing wine 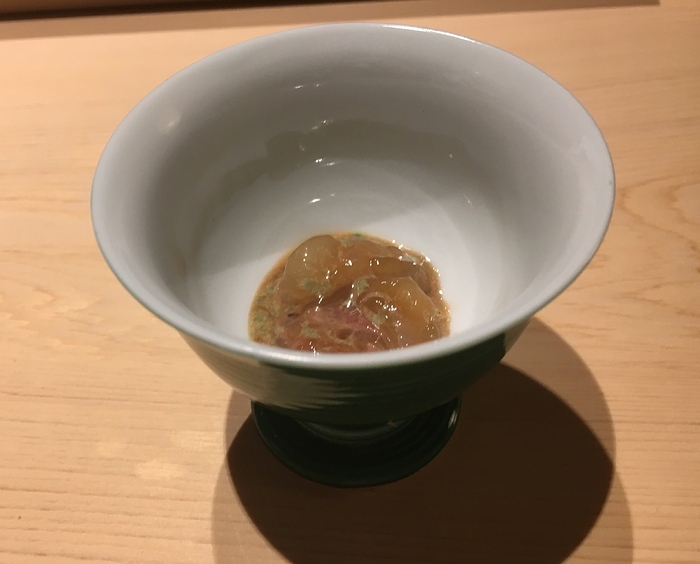 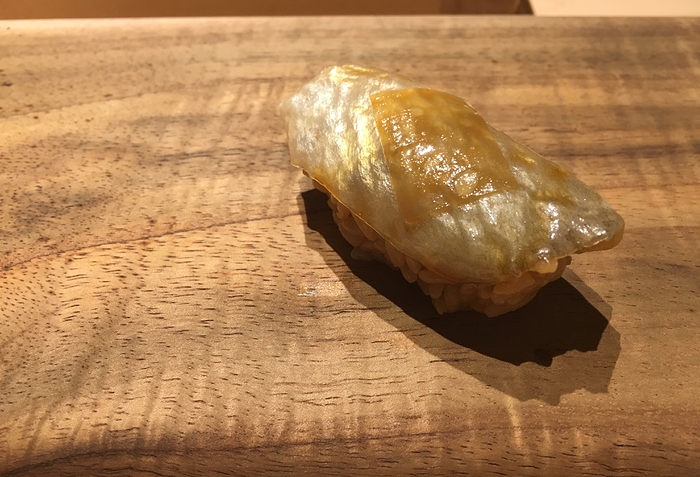 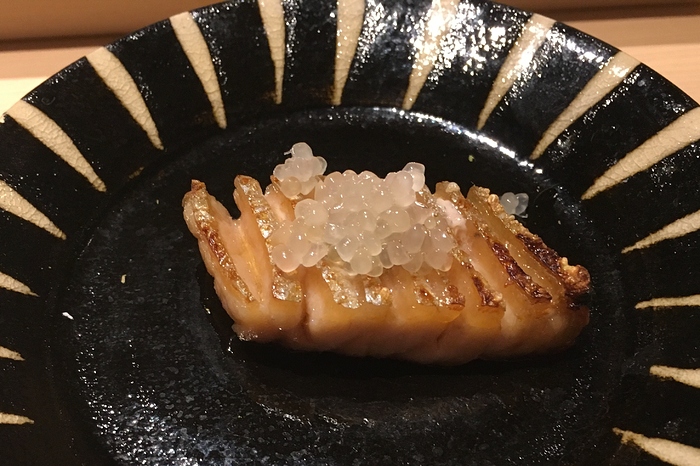 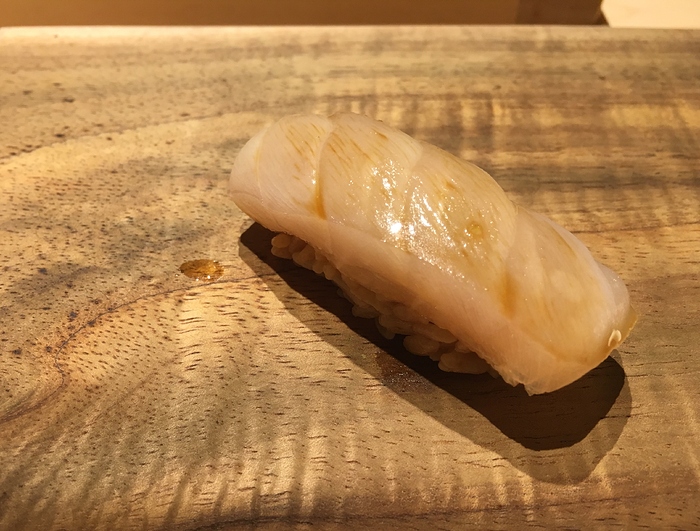 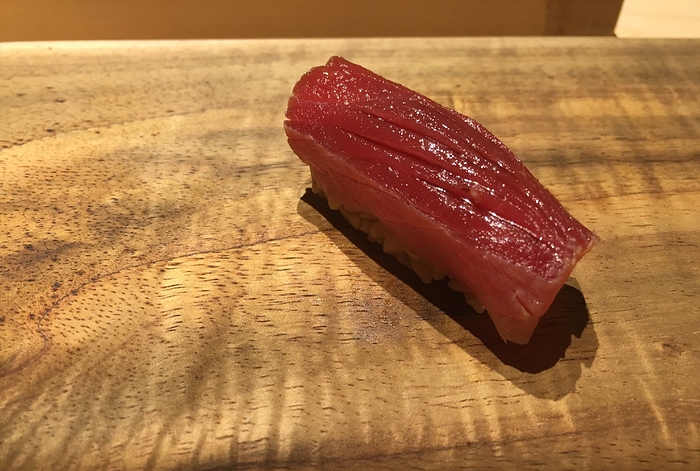 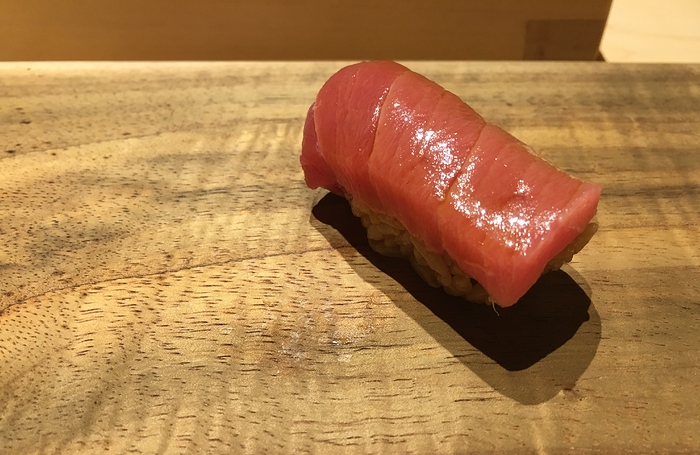 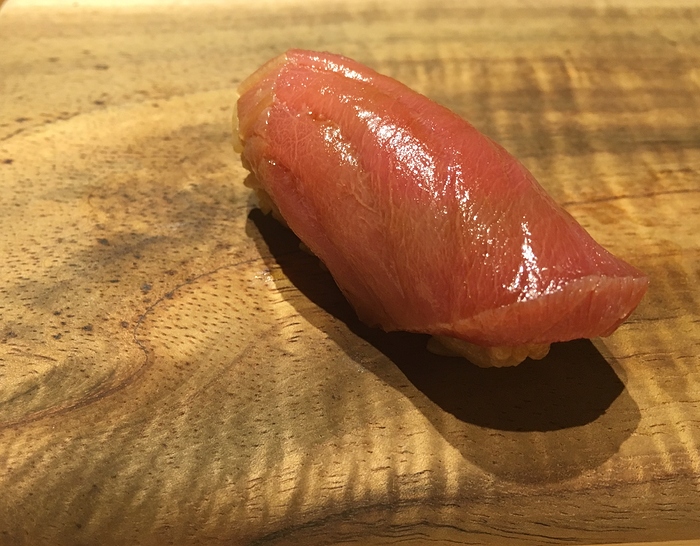 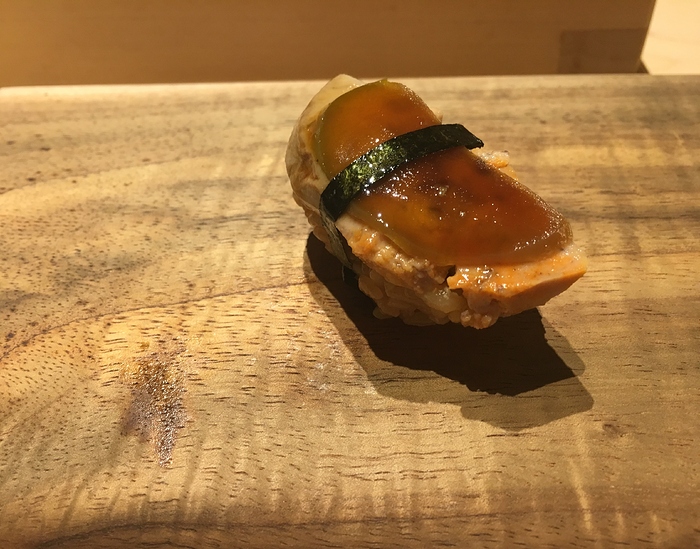 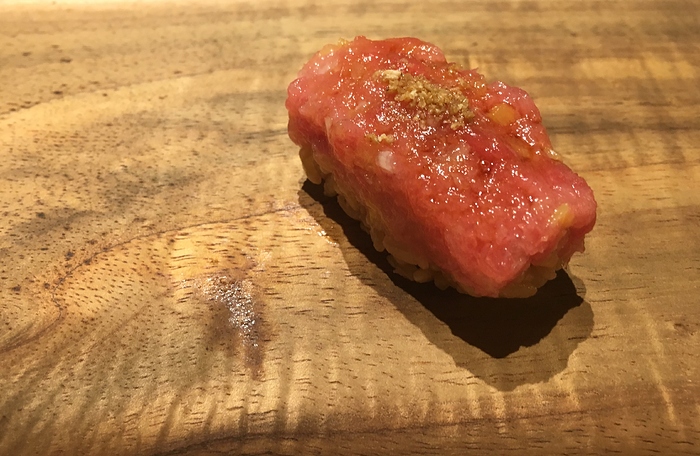 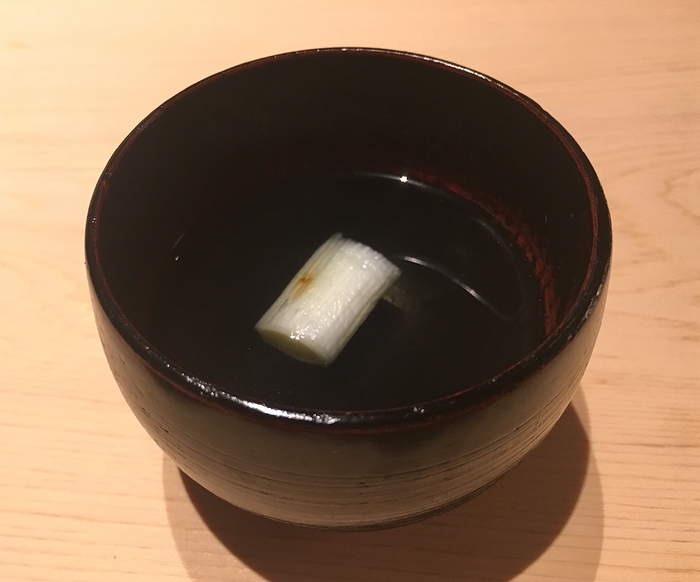 Outstanding report as usual. I had waited to reply till I had a chance to read your entire review in detail so I could imagine your meal, the details and its flavors, which was enticing to say the least. Thank you. The chefs deserve enormous credit for their desire and extra effort to adapt to local ingredients when they could easily just rely on their reputation and duplicate the food from Japan.

A bunch of questions for you:

Is Taku-san expected to be here in the long run or return to Japan once the restaurant is on track?

Did you mean they used different kind of rice for different sushi? What kinds did they use? How is the shoyu?

How much was the 30 course meal?

Got a picture of the salmon “Lau Lau” dish? How did it compare to Onodera since you did a back-to-back?

Unrelated- any thoughts on Sasaki in SF?

Thank you; I haven’t finished my Hawaii report with a full rundown of SGO, but I plan to soon…

The contrast of the 3 textures, 3 temperatures hit me right away. Pitch perfect and cold tosazu really stood out. What a delicious dish, one of the best I’ve had all year!

the rice itself is a blend of Japanese and Californian

Interesting. I am guessing it may be one of the small specialty producers. The rice from the larger California rice producers that I was able to get my hands on was somewhat lacking in flavor.

Not cheap by any means, but the price per course for the level of cooking/ quality of ingredients you described seems quite reasonable, especially compared to the mainland.

Thanks for the pic! The salmon dish seems quite fusion-y in technique, with a blend of the traditional and I don’t know, French-Californian-haute cuisine.