In the 60’s and 70’s, interest in Western food grew in Hong Kong. At the time, only high end restaurants served Western food and the price deterred many. As a result, cafes that served simple western snacks and drinks at a cheap price, and mimicked Western style cafes became very popular. The cafes would offer iced milk tea, coffee, icecream. Fans would hang from the high ceiling of old style Hong Kong buildings. Hence the Chinese name ‘ice room’ for these cafes.

These traditional style Hong Kong cafes had been disappearing as Hong Kong developed in the 80’s and 90’s and Western restaurants became commonplace. Instead of being in the forefront of the local food culture, they are now a dying breed from the past, with only a handful remaining in the city.

Traditional cafes didn’t have full service restaurant licenses and only served simple snacks like sandwiches and cakes. One can consider these cafes to be the predecessor of cha chaan tengs (茶餐廳), which serve anything from rice plates to noodles. Over the years, the line between these cafes and cha chaan tengs blurred as cafes that didn’t serve a full meal found themselves at a competitive disadvantage.

Kam Kee Cafe has a long history, like many other such cafes. The original Kam Kee was in Shau Kei Wan. After 45 years, the owner decided to retire due to old age and rising rent, and shut up shop. A new owner obtained permission to use the name to continue the restaurant. We went to the Wanchai Kam Kee and the owner re-created the decor of a typical cafe/ cha chaan teng back in the 60’s. Lots of history about the restaurant inside. The menu was in the form of a ping pong paddle. Reminded me of some of the toys I played with growing up in the city.

咖喱牛腩農夫包- curry beef brisket ‘farmer’s bread’. I guess that’s the local version of clam chowder in a bowl? The beef brisket curry was delicious, though the best thing about the dish was that the bread could and should be used to mop up all the curry. Made for a substantial and satisfying lunch, enough for 2 possibly. 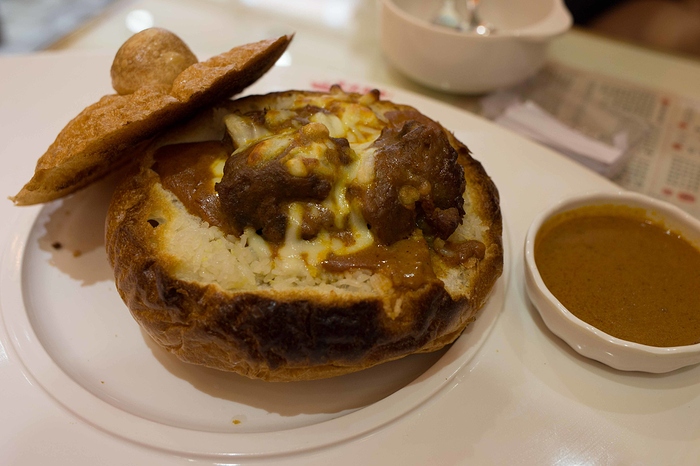 Baked pork chop with cheese over rice. I dig food like these so yes I devoured it and made no particular critical assessment of the dish. LOL. 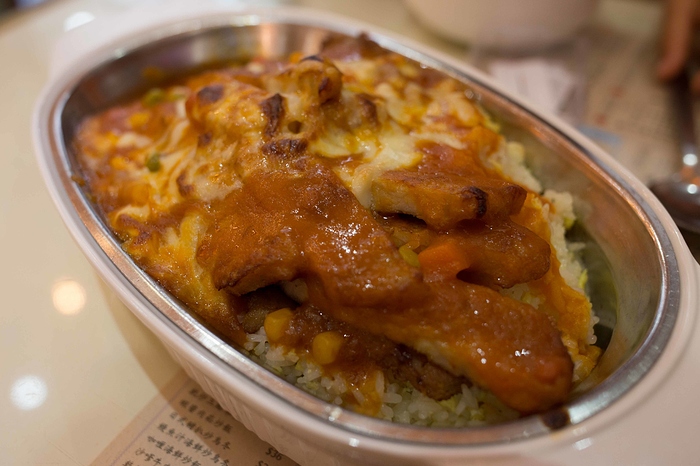 Borscht soup 羅宋湯 that came with the meal. Yes borscht is a popular and familiar soup to most in the city, even today. 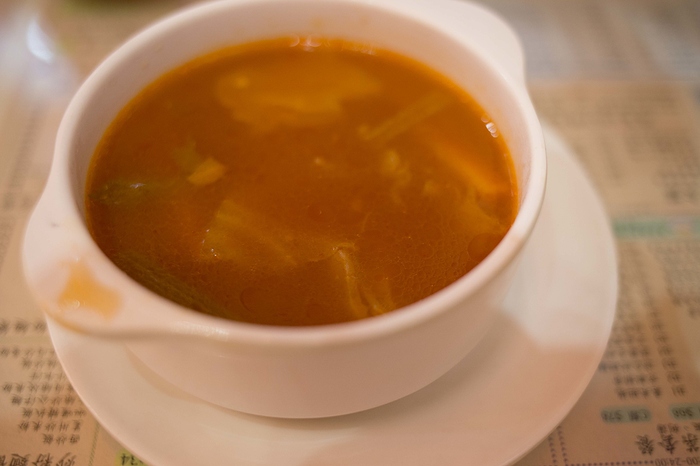 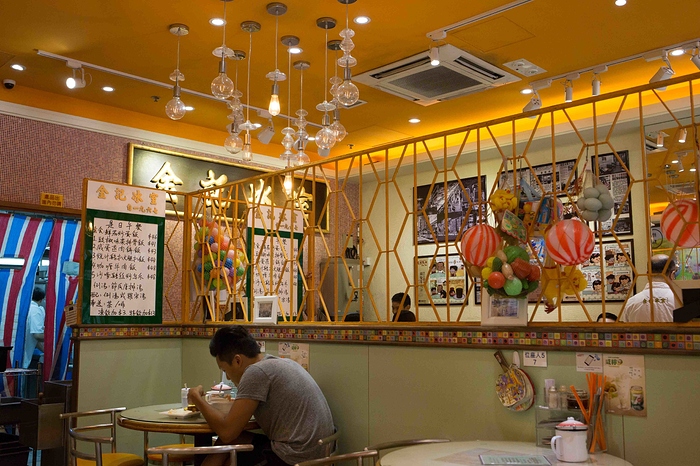 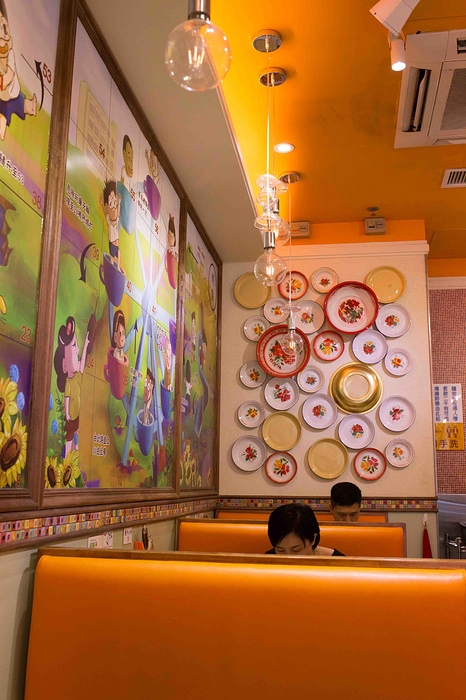 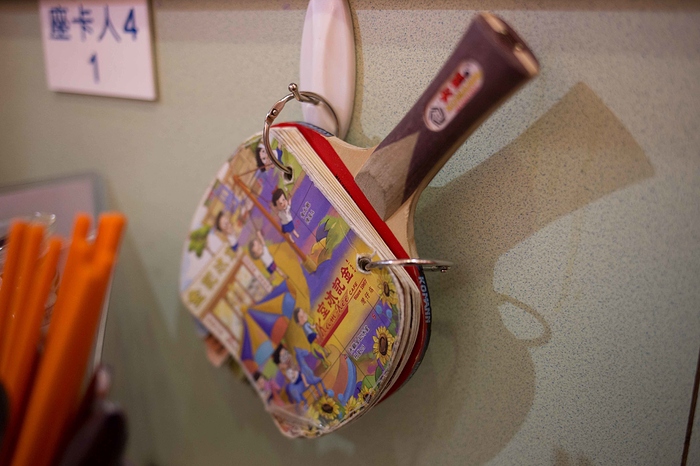 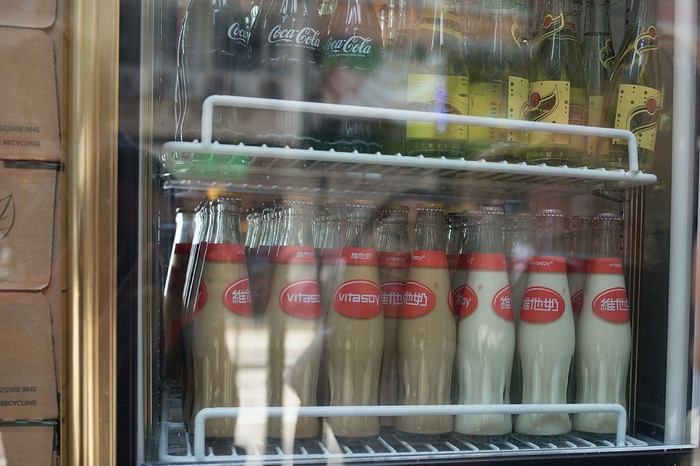 A little bit of Hong Kong culinary history, albeit recreated, right in the middle of modern Wanchai. Another of these old style cafe @klyeoh wrote about:

China Café is one of those old utilitarian “cha chaan teng” (teahouses) which serve sandwiches and simple rice or noodle dishes to the residents of the neighbourhood they are located in. 40 years old and counting, we stopped over at China Café enroute to Langham Place in Mongkok for a cuppa and some sustenance. The almost featureless façade of this eatery was very much obscured by the makeshift stalls of the Mongkok morning market: [image] [image] What I had: Nissin instant noodles (Nissin …

Borscht soup 羅宋湯 that came with the meal.

Do you have any idea why Borscht soup is popular there?

There seems to be a fascination with “borscht soup” which actually bore little resemblance to the authentic Russian version even among retro, old-school “Western” restaurants in Singapore. I guess it was seen as an exotic Western food items back in the 1950s/60s, and usually offered alongside Chicken Kiev, prawn cocktail and Baked Alaska.

These days, despite the availability of the real stuff, people still go for these retro renditions for nostalgic reasons. They’ve sort of achieved “comfort food” status.

I think you are right about the part “Western food”.

Just checking on wikipedia, they have a short paragraph on the Hong Kong borscht, citing originally from the Harbin, Chinese border next to Russia. Interesting…

In Chinese cuisine, a soup known as luó sòng tāng,[k] or “Russian soup”, is based on red cabbage and tomatoes, and lacks beetroots altogether; also known as “Chinese borscht”, it originated in Harbin, close to the Russian border in northeast China, and has spread as far as Hong Kong. In ethnic Mennonite cuisine, borscht refers to a whole range of seasonal vegetable soups based on beef or chicken stock – from spring borscht made with spinach, sorrel and chard to summer borscht with cabbage, tomatoes, corn and squash to fall and winter borscht with cabbage, beets and potatoes.

The “real” borscht soup will never get past the Southern-Chinese palate, with its beets, dill seasoning and all.

In Singapore, the borscht has a beef-tomato broth base, hearty stuff, with chunks of beef, onions and cabbage to lend the sweetness, potatoes to add body to the soup. A dollop of sour cream added to the soup tableside is perhaps the only nod to its Russian origins. No herbs were used. Singapore’s premier spot to taste the Chinese borscht is Shashlik:

Singaporeans were in an uproar when news came out that the old-school Shashlik was closing down last year. People who’d almost forgotten about its existence or haven’t stepped into its premises for years suddenly queued up to book a hard-to-get table in there. The legendary Shashlik restaurant’s cuisine can best be described as Hainanese-style “Russian” - an eatery which, by all accounts, have survived in spite of Singapore’s fickle dining scene. Starting way back in 1963 as The White Bear Café…

Borscht was imported by the Russians who fought the communists and eventually fled the country. Some of those who settled in China became chefs and opened restaurants. Borscht was one of the dishes introduced as a result. When the communists came into power in 1949 in China, the Russians moved again, this time temporarily to Hong Kong, and eventually to other countries. For Hong Kong, many local people ate Western as a treat and the menus were often of Russian origin.

I remembered dining in the Moscow Restaurant in Beijing back in 1999. It was a surreal experience - I had caviar from Heilongjiang (Amur) River to go with the blinis. Borscht soup which, to the credit of the Beijingers, was closer to the real deal than those one gets in Southern China/HK/South-east Asia.

Borscht soup which, to the credit of the Beijingers, was closer to the real deal than those one gets in Southern China/HK/South-east Asia.

Borscht in HK is more like a tomato soup than a real borscht, and not particularly tart either. I guess people just make it however way they like it nowadays.

Same in Singapore - more like a tomato-ey, beefy soup. The Russians won’t recognize it.

I’d think though that Moscow Restaurant may be more incentivized to retain the Russian-ness of its food though, since it has the history…! I am guessing they may even have Russians in the kitchen.

Breakfast set here was ok. Comfy, but not particularly special.

Pickled vegetable with slices of pork and thin rice noodle. 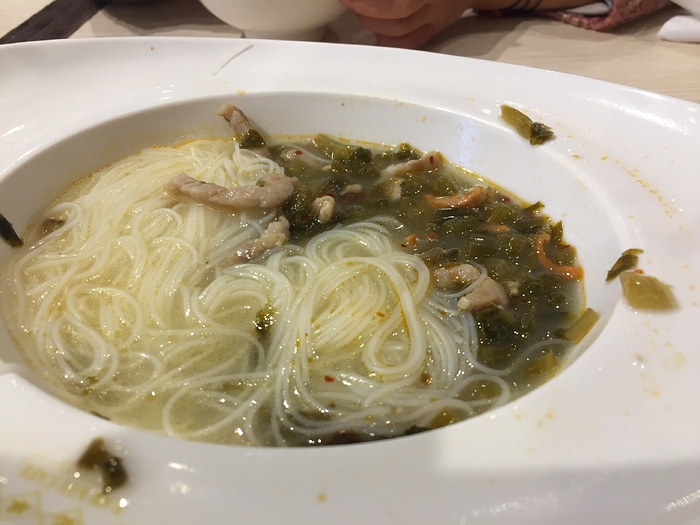 Came with a toast and a sausage. 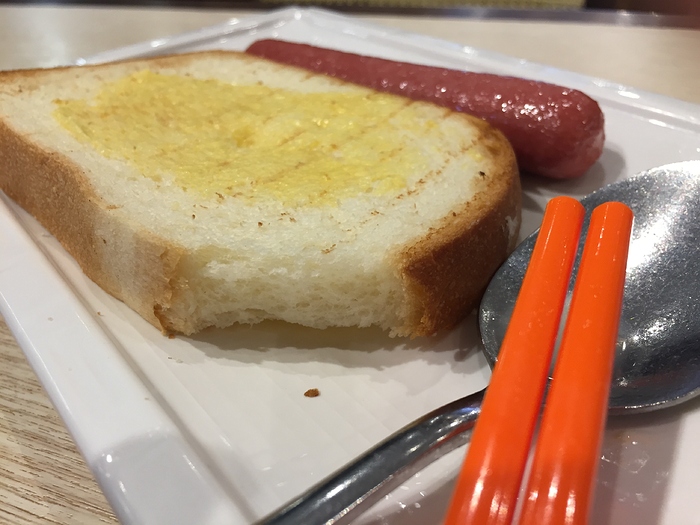 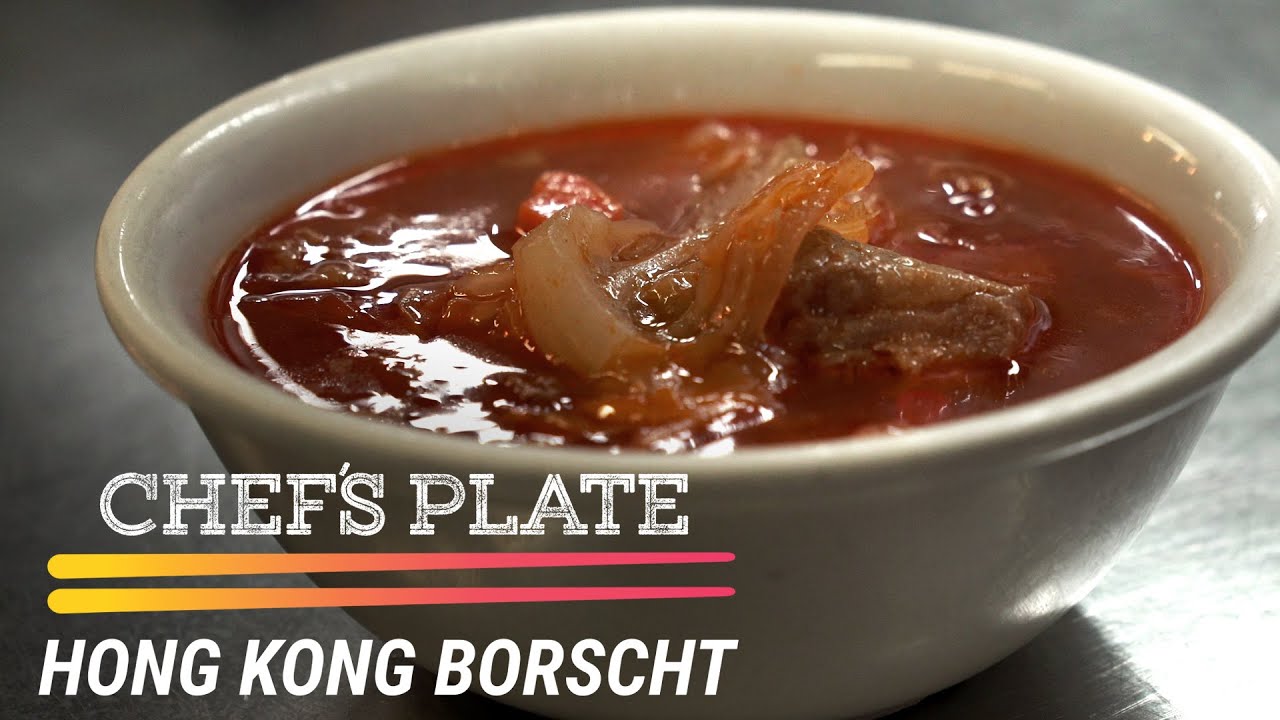 It’s truly amazing how similar Hong Kong Borscht soup is to its Singapore counterpart. I used to go to these Hainanese-run “Russian” restaurants, like Shashlik, Borshch Steakhouse and Berkeley @ Sloane Court Hotel for their Sinicized Borscht. For authentic Russian borscht (beets & all), I’d go to Kalinka Malinka, Buyan or Nadezhda.

But Shashlik, with its tomatoey, beefy consomme, replete with potatoes, cabbage leaves & carrots, seemed to have outlasted all the other restaurants listed there.