The old Aberdeen Seafood Wholesale Market Canteen was a bit of a favorite among local gourmands because of their access to any seafood that passed through the wholesale market that supplied seafood for the entire city, reasonable prices and great taste. I hadn’t had the good fortune to eat at the old market before they closed 3 years ago because a rent hike. Though some in the Chowhound community had great meals there.

The new canteen that takes its place is run by Keung Hoi Ching, the president of the HK fresh fish trade association. We were originally planning to go to the Ap Lei Chau wet market to grab some seafood and had Yiu Kee cook for us upstairs in the cooked food centre. When we found out that Yiu Kee was on vacation for the week, we decided to make a same day reservation to the new Aberdeen Seafood Wholesale Market Canteen and see how the food was like. With same day reservation, that meant the canteen would not have time to find the more ‘exotic’ stuff. We decided on a HK$300/pp ‘omakase’- not too high priced just to ‘test the waters’.

Description of dishes were below. My overall impression of the meal was that the seafood was (obviously) very fresh and adequately prepared, but nothing mindblowing in terms of taste. The kitchen seemed to favor strongly flavored or salty prep (e.g. clams, surf clams, prawns). Though in general for Cantonese seafood prep, I prefer to let the seafood shine through on its own with minimal spicing. Value seemed ok. While I wasn’t able to compare against the old canteen, I think I prefer the picking-your-own approach in Ap Lei Chau to the current canteen.

After the meal, we wandered into the nearby market souvenir shop and chatted with the lady who worked there. She said that there had been fewer customers after the changeover and that most suggested that the old canteen was a little bit better.

I also asked her about the ‘floating ship noodle’ nearby in the Aberdeen shoreline. She said that they were usually there near sunset and people lined up for it. So it’d be an interesting try for those who happened to be nearby and wanted to try one of the very few places in HK that sells noodle from a boat.

She also suggested taking the boat ride to Ap Lei Chau and go up the tower to catch a good view of the harbour. There was also a Aberdeen/ HK seafood history museum near the wholesale market that’s open on Saturdays or by appointment during the week. 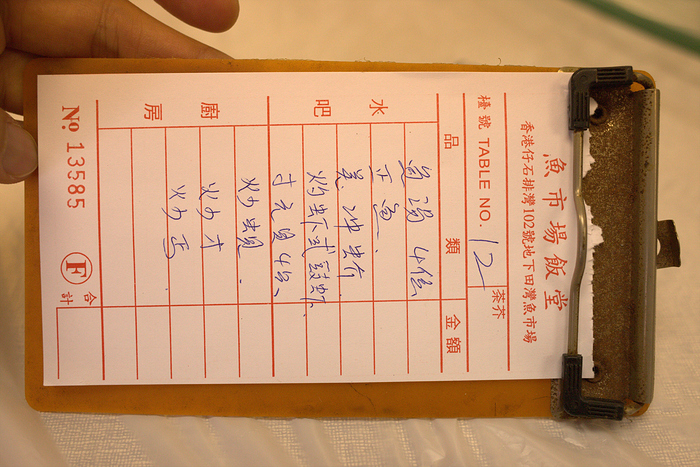 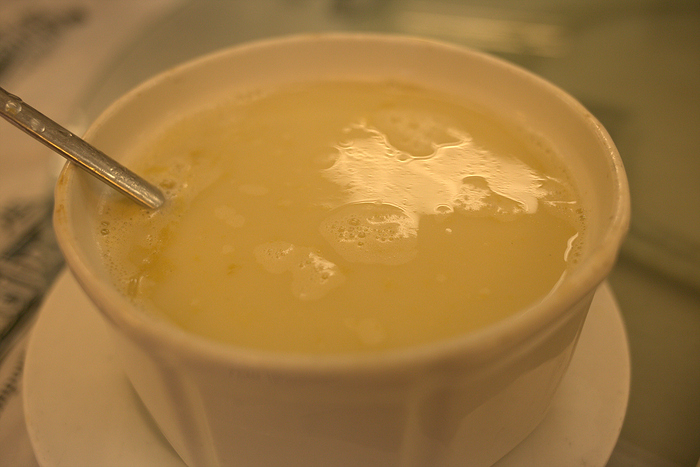 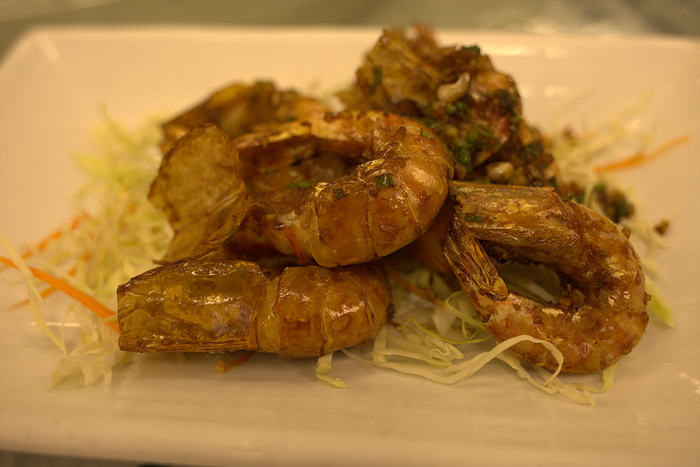 玉蟹 ‘Jade crab’- crab, prepped with ginger and scallion, was sweet and yummy. Favorite of the meal. 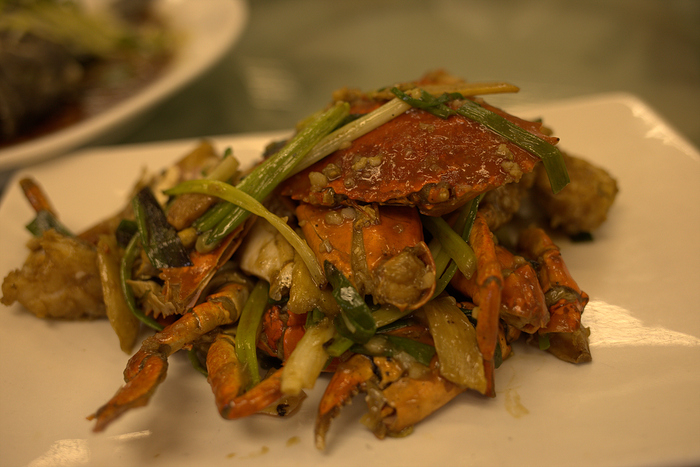 青斑 Green grouper, steamed with ginger and scallion- Nice fish, though maybe half a minute to a minute overcooked. 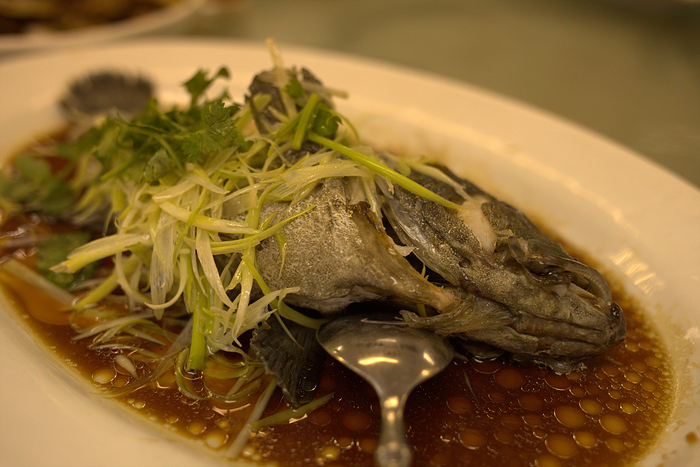 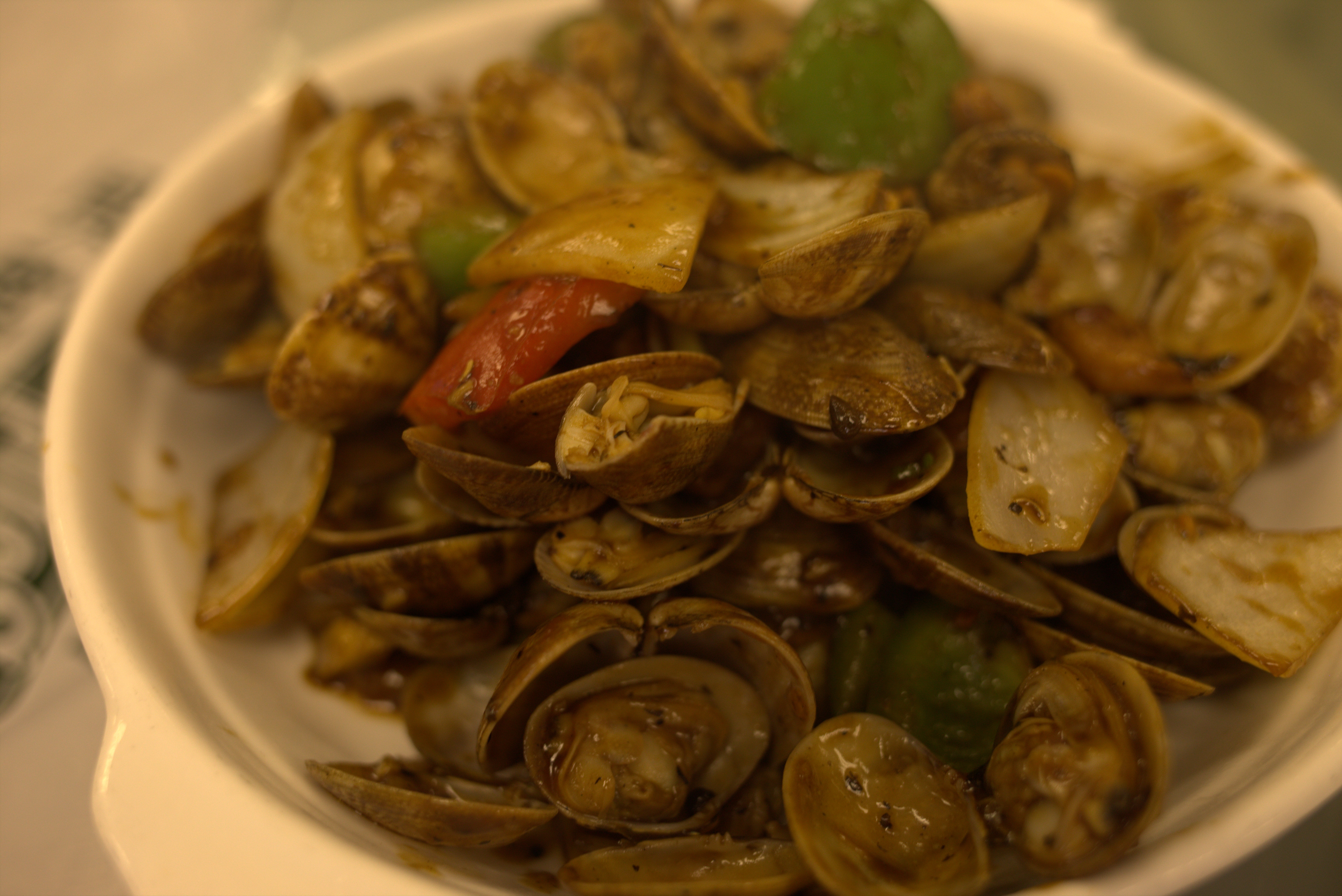 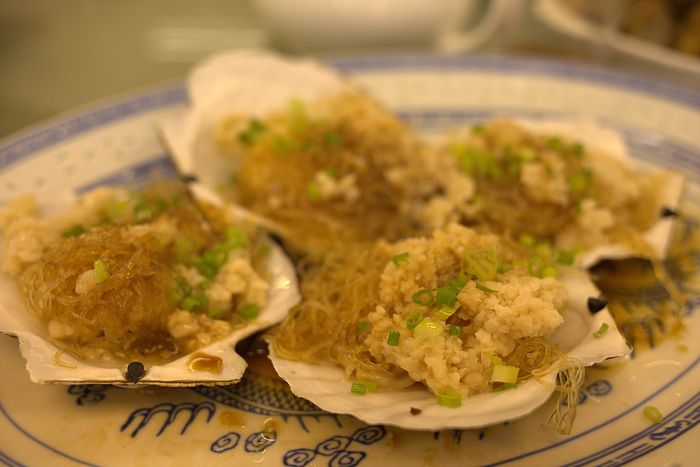 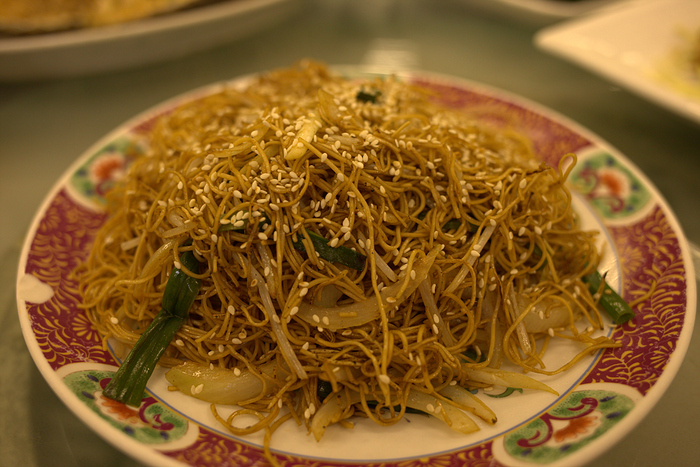 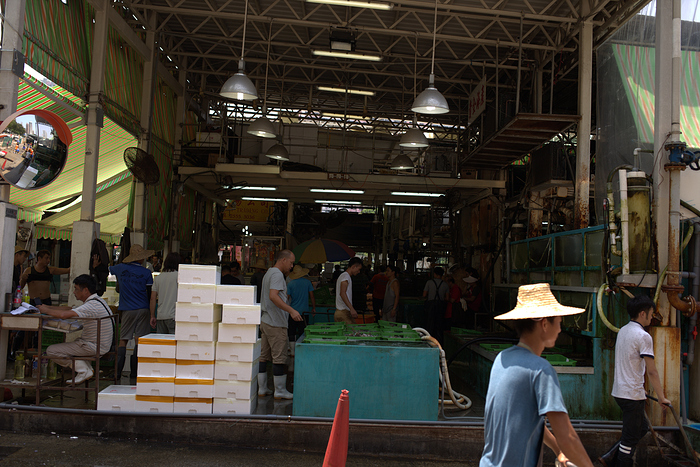 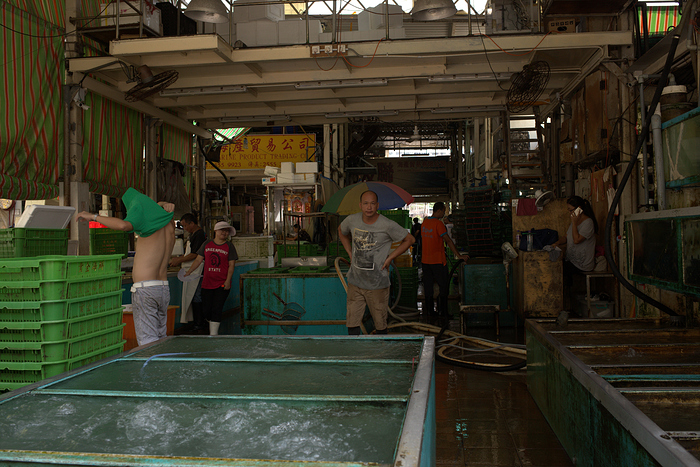 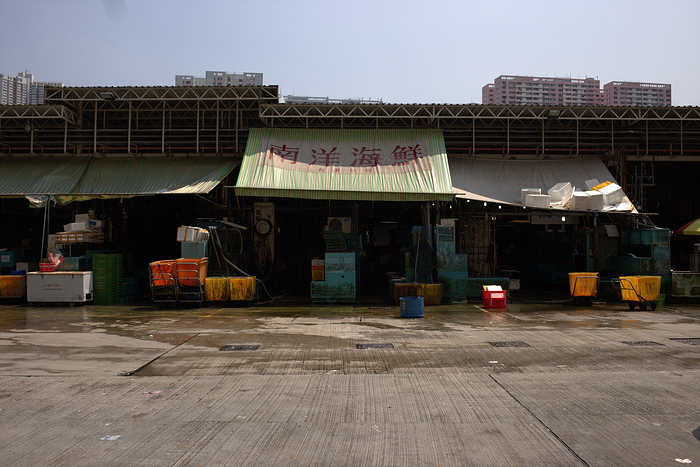 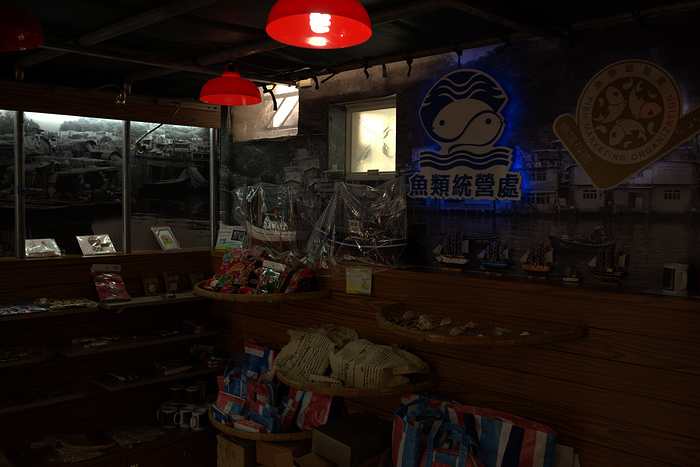 I usually like seafood to shine on its own especially very fresh ones. I have tried in several places, in Sai Kung, Lei Yu Mun or in Ap Lei Chau, I feel the sauce covering too much the taste of seafood.

I am with you. I feel good quality seafood should be ‘handled with restraint’ given the flavor shines on its own already.

Next time you can consider Chu Kee (to the right side of Yiu Kee, in the right corner). though they only open in the evenings.

We actually called up Chan San Kee 陳新記 and they also did lunch seafood, but settled on the Canteen.

Have you done a comparison between Chu Kee, Pak Kee, Yiu Kee and Chan San Kee? A friend preferred Pak Kee to Chu Kee but I haven’t been to Chu Kee.

I also asked her about the ‘floating ship noodle’ nearby in the Aberdeen shoreline. She said that they were usually there near sunset and people lined up for it. So it’d be an interesting try for those who happened to be nearby and wanted to try one of the very few places in HK that sells noodle from a boat.

I was on the Aberdeen promenade another afternoon around 5pm. I chatted with the lady who’s trying to lure tourists into the sightseeing boat and asked her about the noodle. She said the noodle boat went from place to place all along the promenade during lunch time and was usually done by 3pm.

Here’s an article on the floating ship noodle in Chinese for those who are interested in looking for it: 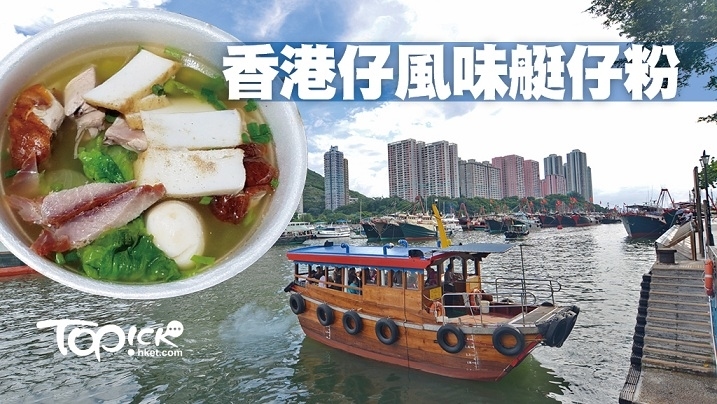 The administrators are not fond of tourist taking pictures of the market ala Tsukiji, found out the hard way… 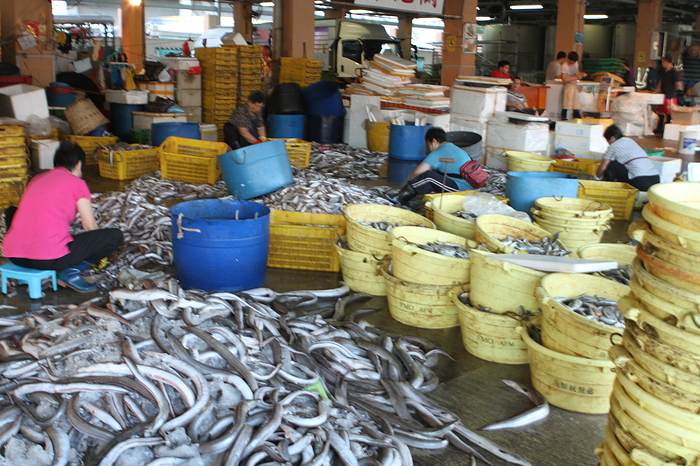 And what did they do to you after you took the pictures? Threw an eel at you?

BTW, did you eat at the canteen? Before and after the ownership change? How did you find the food?