As the title says I’m looking for a homemade version of giardiniera-the store bought ones are just too spicy for my taste. I did do an internet search but am now overwhelmed with which spices to use as well as types of vinegar (seasoned rice vinegar vs. regular white vinegar vs. cider vinegar ). I’ve made dill and bread and butter pickles many times but this has me a bit stumped. TIA.

Is there a store bought version you do like? I would start from that ingredient list as a guide for which vinegar and such- i think white wine vinegar is most traditional.
I trust martha stewart for recipes, i had a friend who worked there and they are maniacal about recipe testing before it’s published anywhere. Looks rather simple, just reduce/omit the chili. Maybe start with a half recipe and note what to modify next time to your preference Crunchy vegetables pickled in white-wine vinegar can be served as a garnish or a side dish.

We make lots of Giardiniera. I can give you some basics. For the brine - 50/50 white vinegar & water. 1 T pickling spice per 2 quarts of brine. A little salt helps it some. I usually add a basil leaf to each jar. For veggies - cauliflower, carrots, celery & a bit of red & green pepper for some color. I also add small white onions, halves or whole - depends on the size, if I have them or pieces of red onion if I don’t. I add pickled pepperoncinis but they have a bit of heat so you may want to omit them. 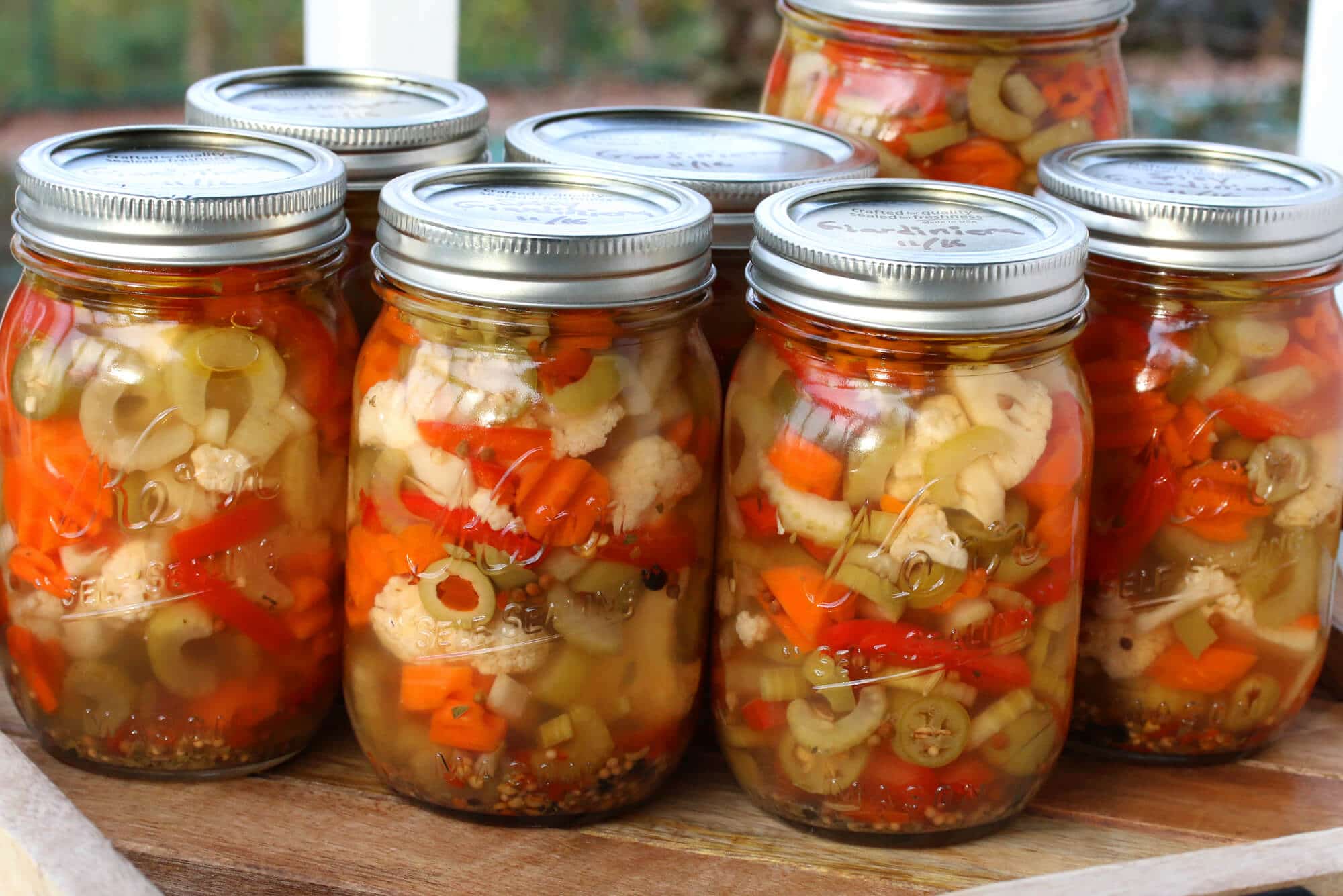 Giardiniera, pronounced "jar-din-air-ah", is one condiment you don't want to be without.  And once you've tried it you'll understand why. Originating in Italy, these pickled vegetables were introduced to Chicago in the late 19th century

We follow this to the letter and as printed with photos take you step by step. From the whole spice list you can adapt to taste.

We love this salad all summer.

I like all of the recipe suggestions so far (although I omit clove, or use it very sparingly, just from taste).

Not sure how it can factor for you, but I first made Giardiniera when I found myself with an absurdly large number of serrano chiles from my garden. A matter of interest for food evolution emerged for me as I researched and lived this out: chile peppers ripen in late summer, whereas cauliflower, another must-have in Giardiniera, ripens around late-September/October. The classic preparation is to brine/pickle the chiles for 6-8 weeks. So the end of the chile treatment coincides with the harvest time for the cauliflower. That’s the beautiful way the world used to work.

If you can find them, you might use bottled “sport peppers,” which are used on Chicago style hot dogs. They’re pickled, not terribly hot (less so than fresh serrano), and could emulate the traditional approach that I described.

When I make giardiniera I use peppercini peppers- more traditionally Italian.