Seven hungry onions gathered for lunch at Kendejah, a newly opened Liberian restaurant in San Leandro. We shared a diverse and delicious set of dishes:

Everything was delicious and full of flavor. Some foods like fufu and grated cassava were new to me, and others foods that were already familiar were spiced in new ways. The meal was an excellent introduction to a cuisine I had never tried before and a great way to meet my fellow onions.

My favorites:
Chili sauce: none of the dishes were spicy, we were given a green chili sauce to spice our dishes according to our preference. The chili sauce was moderately spicy with plenty of green pepper flavor, and integrated well into all of the dishes.

Chicken wings: coated with a spice rub and fried, they were addicting and one of my favorite dishes. Any guesses on what goes into the rub? We asked and were told it was a secret mix of spices.

Bean torbogee: another favorite that reminded me of southern red beans and rice, except the beans were black. With all of the dishes, there were no dominant spices that I could detect, so savory goodness is my best description.

Oxtail: yet another favorite that I would love to eat again. The oxtails were cooked to tender and the sauce was more savory goodness that was different than the beany savory goodness described above.

Fufu and soup: the fufu was plain flavored but perefect cut up into gnocchi sized pieces and tossed into the soup. Based on appearance, I was expecting the fufu to have the same texture as mochi. It was similar but a little more coarse, perhaps due to the plantain flour? The soup was flavored with peanut, more savory goodness.

Jollof rice was like a fried rice or chicken biryani. It was good but probably the least interesting dish.

Fried fish with grated cassava: the fried who tilapia had crispy skin and fried to well done, but not to the point where you could eat the bones. Grated cassava is a little bit like a stiff couscous.

Portions were generous and easily split amongst seven. Service was friendly but slow - we didn’t get our silverware until a few minutes after the food arrived. Since they only recently opened and since we were a large group sharing all the dishes, the slow service isn’t surprising and should improve with time.

Fellow diners will be chiming in with their pictures and opinions.

Its a great meal. I wanted to try Liberian because I was unfamiliar with the cuisine, and was delighted by the capable cooking of the Liberian mother-daughter combo in the kitchen.

Stepping in the ‘restaurant’ felt more like stepping into the owner’s home. With his radiating smile (and this must be the first time I comment on the smile from someone in a restaurant) and a warm personality, the owner made us feel welcome and helped us understand the dishes while we were navigating the small menu.

Service was more like ‘make yourselves comfortable at home’. After the chefs opened the door, we helped ourselves by turning on the lights, combining the tables, asking for utensils, plates, etc. I didn’t mind. It was part of the charm of the place.

But charm wasn’t the only thing that Kendejah had going for it. They got the goods in the kitchen too. I’d classify the food as highly capable home-cooked Liberian. Nothing fussy, just classics with just the right amount of flavors and spices. They took their time to get the dishes right too. Since I think we were the only sizeable table there.

The owner told us that about Liberia’s relation with the U.S. historically, and similarities between Liberian cuisine and southern cuisine (and Caribbean too). What we ate here was different from food back in Liberia in terms of the heat. The dishes were not spicy at Kendejah by default. But the delightful green chili sauce allowed us to control the heat ourselves.

My favorites were the peanut soup with fufu and bean torbogee. When the savory soup with chunks of pork was poured on top of the sticky fufu, the taste combination was delightful. I recall the bean torbogee had a slight bitterness (in a good way) that added a layer of complexity on top of the beans that set it apart from most of the mashed beans dishes that I usually find uninspiring. The wings were tasty too, though I had no idea how Liberian it was. My section of oxtail was a bit tough and the meat still stuck to the bones, and could use a couple more hours of cooking, though it was well seasoned. Fried fish and jollof was fine though they didn’t stand out relatively. Some of us got Reed’s Jamaican ginger beer.

The restaurant is still a work in progress. There were plenty of space for them to place tables in the future. The mural on the wall, intended to share the history of the country, was perhaps 15% done. The onions enjoyed each other’s company.

Just before we left, about 20 people turned up to celebrate the owner’s birthday. Seems like his warmth is contagious. I genuinely want this restaurant and the owner to succeed in this project. It takes courage to open a restaurant with a cuisine that most of the Bay Area are unfamiliar with. I hope more will discover the great flavors from this small country in the west coast of Africa. I will return to try more of the menu. 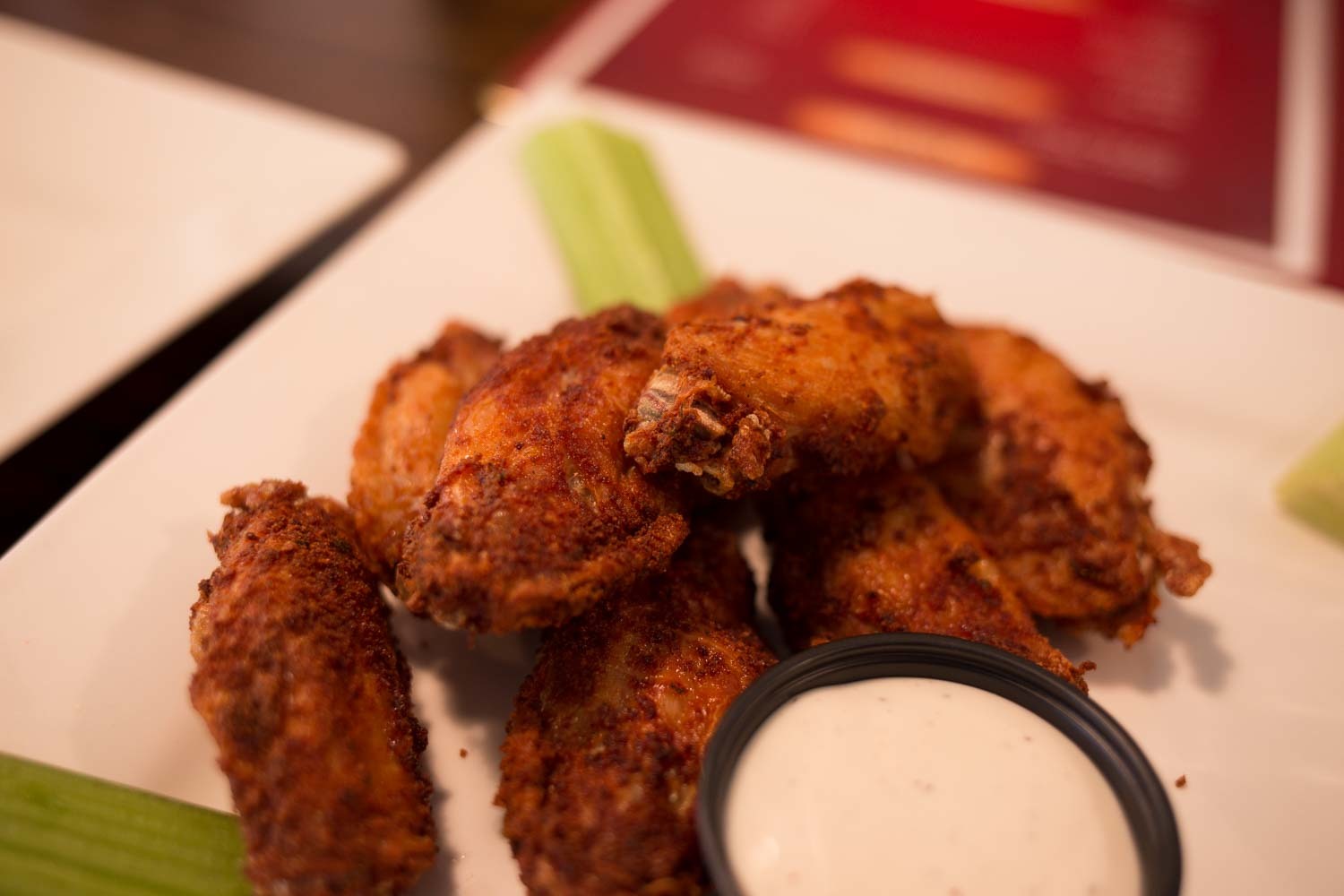 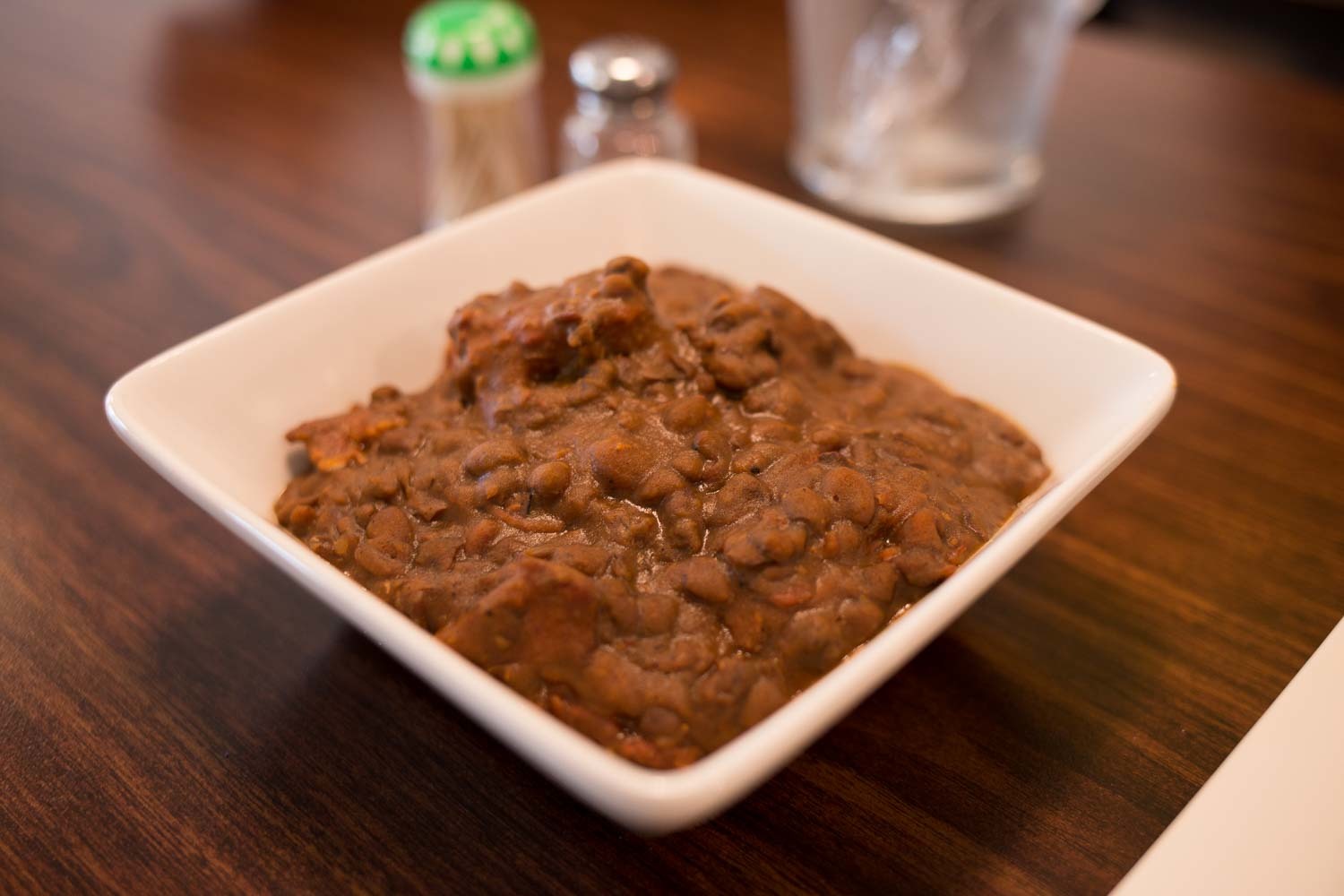 Oxtail with rice and beans 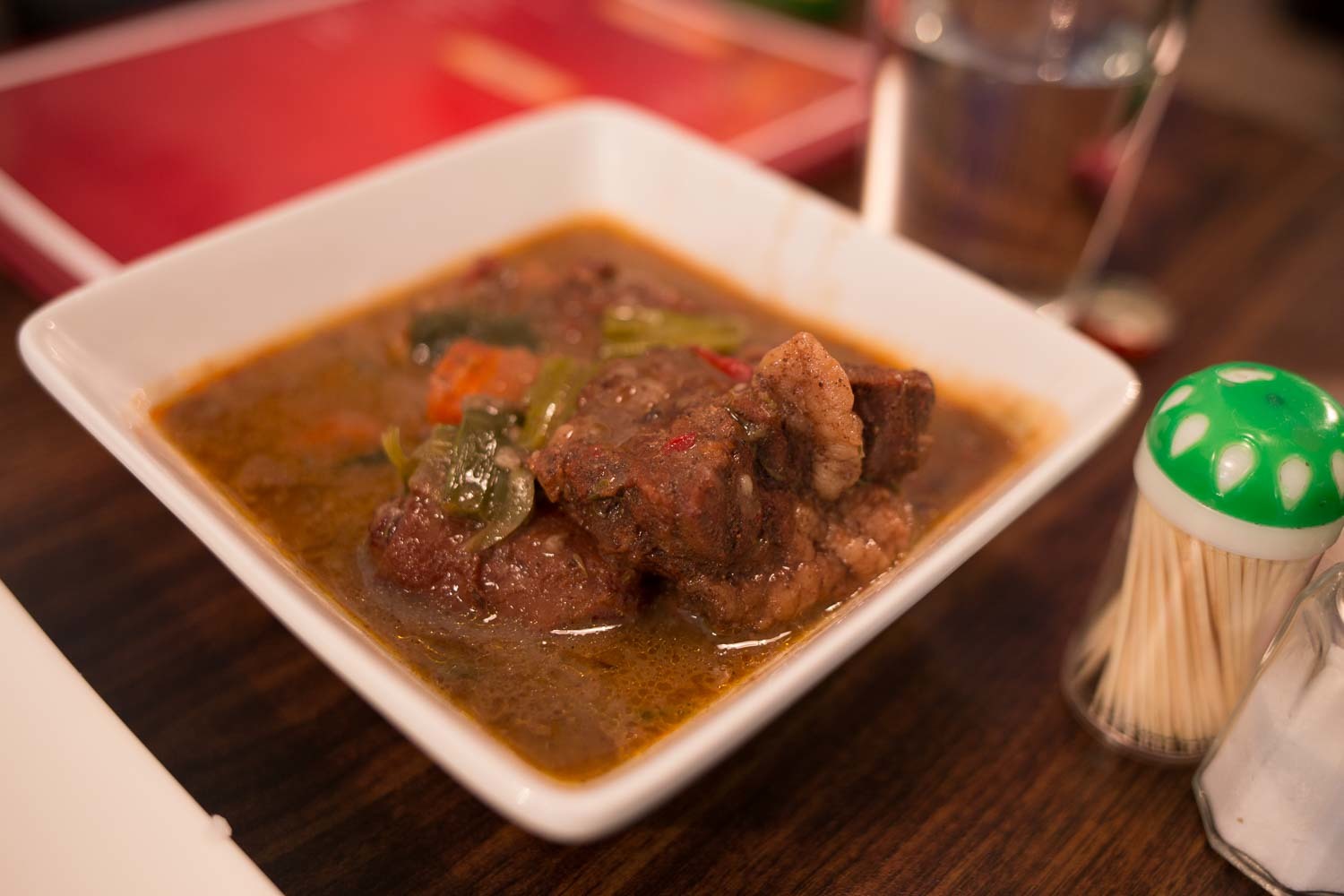 Fufu with peanut soup (fufu not in picture) 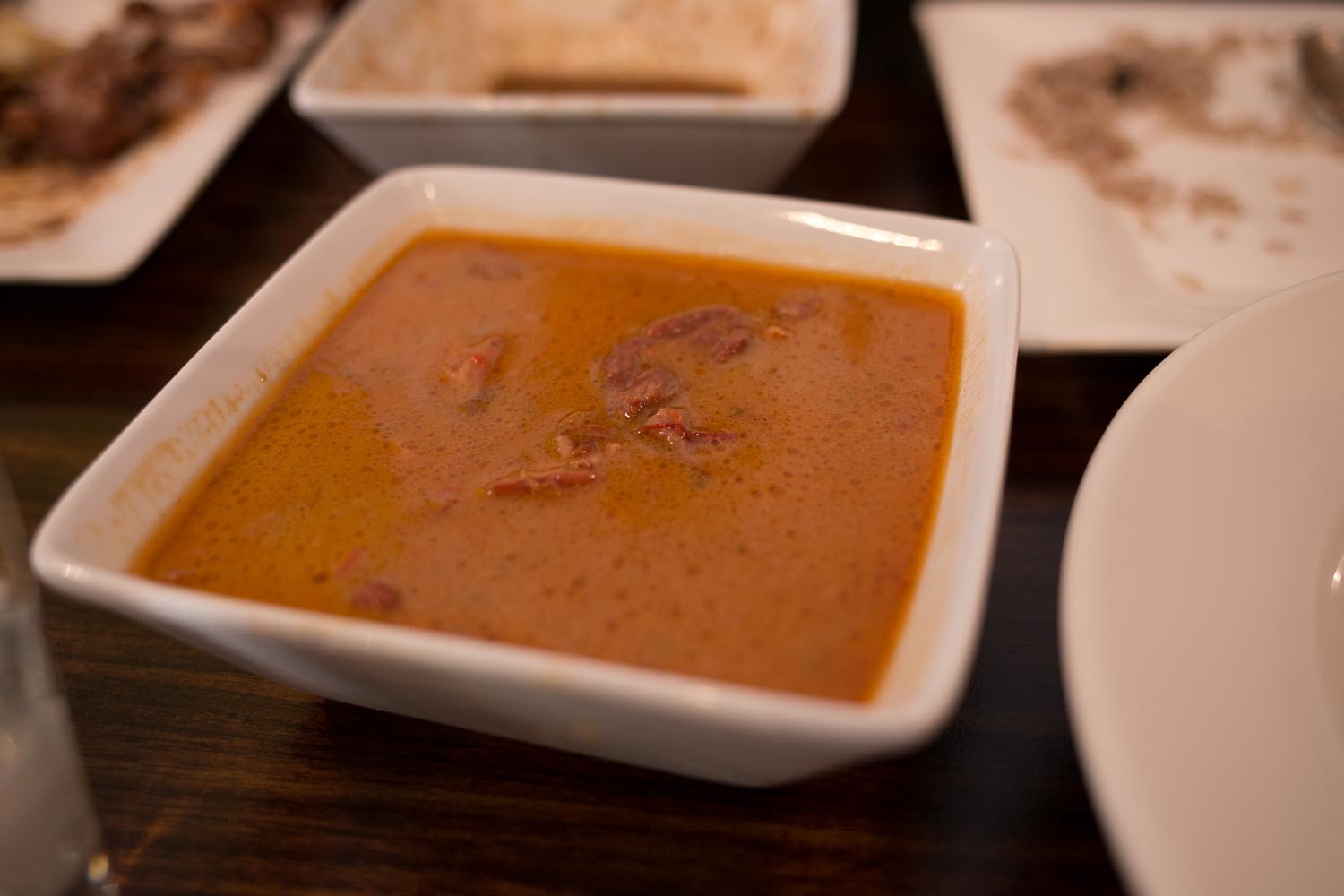 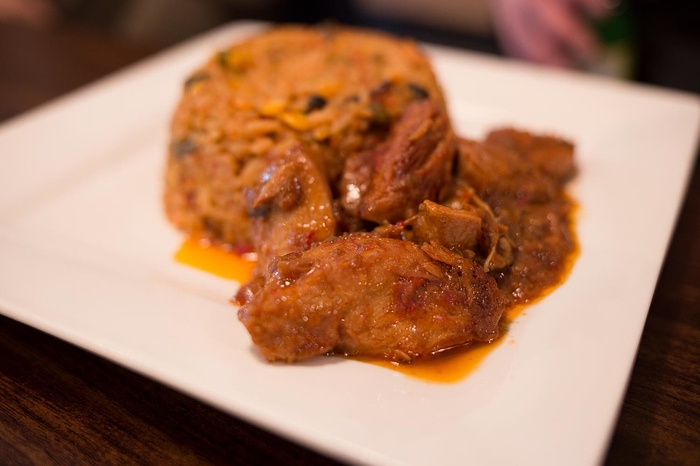 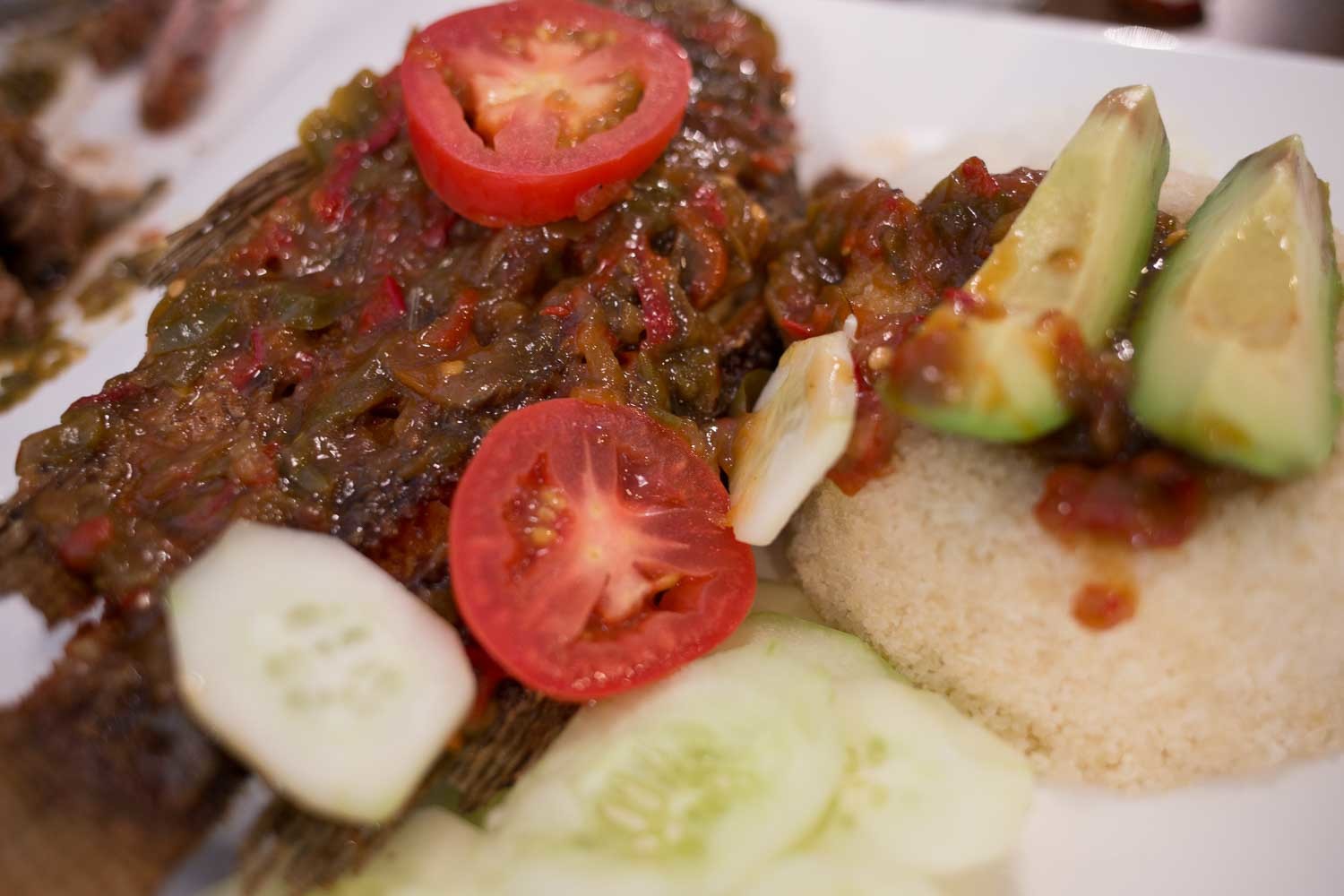 I’m really happy sck noticed this new Liberian place and organized a HOdown. As mentioned, the dishes were quite good. I really like how they’ve organized the menu, with specialties for each day of the week so they don’t stretch their kitchen too thin, but can offer a wider variety of dishes http://www.kendejahrestaurant.com/kendejahrestaurant_menu.php

I was a bit worried when the owner proudly told us that “the good thing” about all the dishes was that they weren’t spicy, and he could serve a hot pepper sauce on the side. The dishes were well-seasoned and flavorful on their own, though I preferred them with the addition of the not too hot sauce, especially the oxtails. To me, the biggest winners were the fufu with peanut soup and (to my surprise) the chicken wings. The plantain/cassava flour fufu served here was silkier and more pleasant to me than other versions I’ve had (usually yam) and paired well with the rich soup with mild peanut flavor and tender, partially cured (red ring around the edges) beef. The wings had a nice seasoning to them, but what impressed me most was that they were moist and the fat had beed rendered from under the skin and the skin nicely crisped.
I will definitely be back to try dishes on other days of the week. 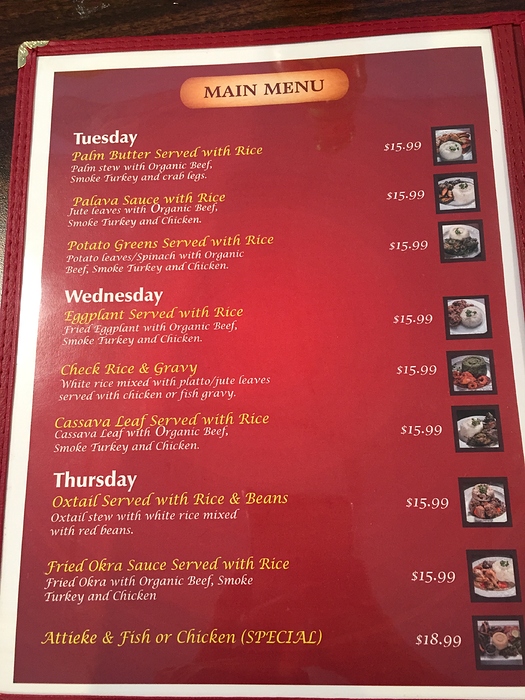 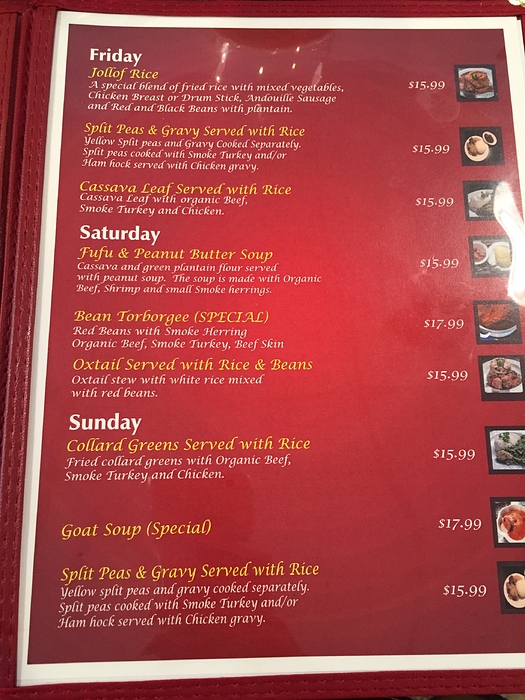 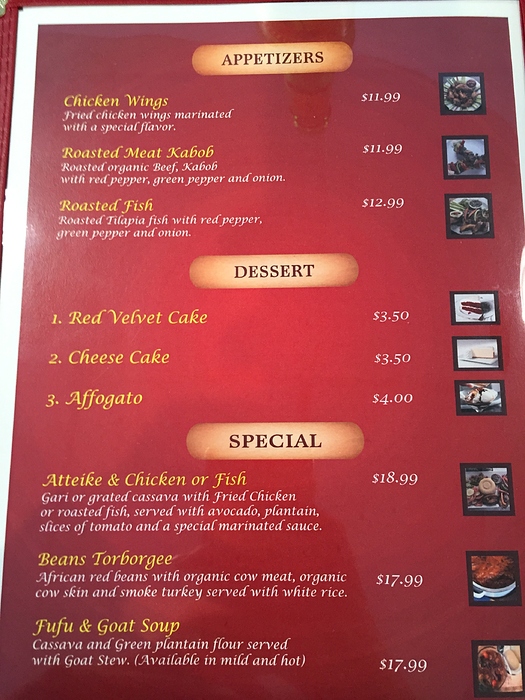 Jonathan Kauffman’s writeup in the Chronicle! I really should go back soon… 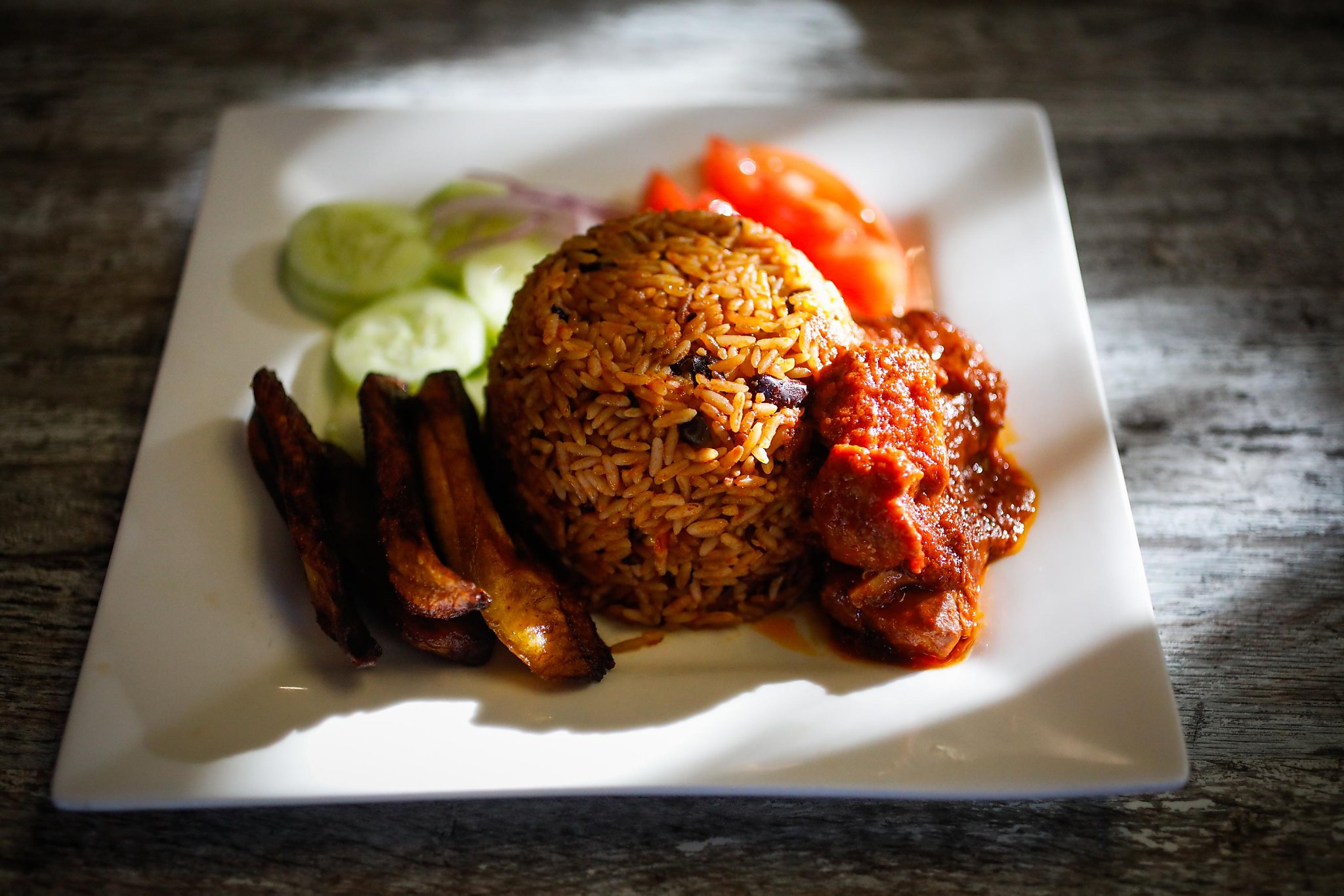 Kendejah is Bay Area's first Liberian restaurant, and it's just the first step

Before you order at Kendejah — before you even ask questions about the dishes on the menu, in fact — Dougie Uso will distribute a laminated card to you and your fellow diners and ask you to read it. “A short history of Liberia & Kendejah,” it is...

Kendejah now has a food truck, which, for the past few weekends has been parked at Lake Merritt on Lakeshore Ave. The oxtails were as good as I remember them from the restaurant.

That’s pretty cool. We went several months ago and really enjoyed the food. I want to go on a Saturday sometime because that’s when they have a dish with herring in it.