Since some of my photos of these items from our crawl …

… seem to be a tad too large for the HO system, you can find them here:

i’m going to stick with my observation that the blue sausage took the most courage for y’all to eat reinforced by Dave’s Rorschach photo where I can’t help but see a fetus. I’m sure when I see @ninkat next she’s going to recommend five-day-a-week therapy for the rest of my life… 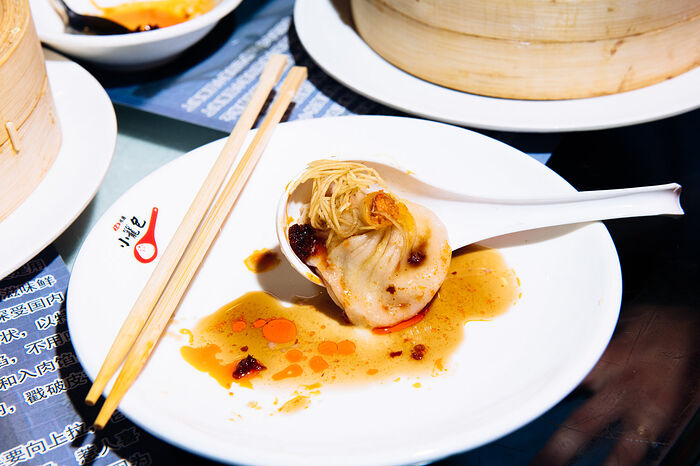 The Best Dumplings in Flushing, Queens — The World in a Pocket

We hopped (eventually waddled) around downtown Flushing, Queens on a sunny April day, traveling all over China through the dumplings we ate. Eddie Mao’s walking dumpling crawl is perfect for a Saturday adventure or a day trip on a long weekend. In...

it was one of those moments when courage was rewarded! The blue sausage was one of the most delicious egg dishes I’d eaten in a very long time. I eat a “straight” preserved egg every now and then, but this was much better.

Thanks again, Brian, for taking the plunge! This was good. 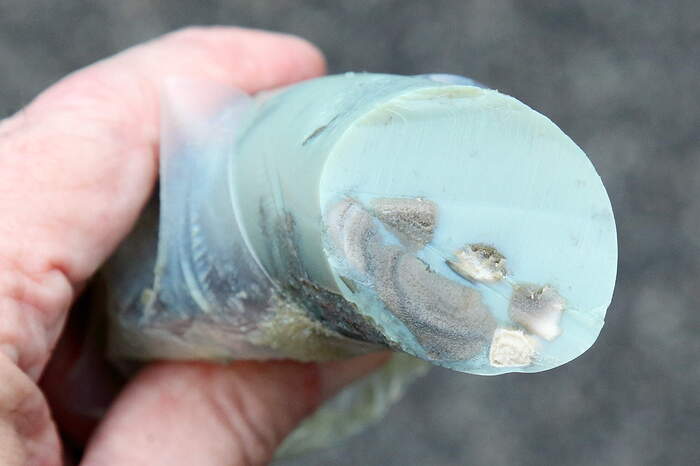 Thanks for the link - good read!

Why was the sausage blue?

You’re welcome Dave. When I saw it, I knew it had to be either incredible or awful and I had to know which.

Dave, I thought it was blue from the color of the century eggs.

From the egg, sure, but the color reminds me of the baby blue in a Paas dye pack at Easter. A light-swallowing greenish black is the color I’m accustomed to.

Dave, it certainly could have food coloring added, they wouldn’t be the first cooks to do this.

Another argument in favor of food coloring would the difficulty of getting a pure blue from an ingredient with a natural yellow component. If you remember your color science, blue is cyan and magenta without yellow. Right?

I’m almost ready to head back and try it again.

stopped by distinctive for seafood rice cakes after the us open today, I can see why everyone liked it as one of the best bites of the day but around the 4th bite, I found myself looking for a little taste contrast, by the end of the first rice cake I started questioning the wisdom of finishing the second rice cake and by the time I finished the 2nd rice cake, I vowed to never, ever order the dish again

I was there probably not too long before or after you

I know what you mean, though — I realized it was the perfect sharing bite. For the crawl, each square was cut into 3 sticks, so just a few bites of the mochi-ish denseness, which was perfect.

dang, sorry I missed you!

I almost messaged you and @SteveR but then checked the US Open thread for when you guy were going to be there and so I didn’t… next time.

Had a mini crawl of my own today – started at the Ganesh temple canteen and then back to the central area near the subway.

Temple – was all decked out for the Ganesh festival that starts tomorrow. It was buzzy today with organizers and also folks stopping by before the Big Deal tomorrow (which I narrowly missed and not by design).

I got the “Jumbo Idli” which is 2 idli and 2 medu vadas, to go because I wanted to eat dumplings and not fill up on South Indian food! Also madras (filter) coffee, which was suitably strong but a bit milkier than usual and a bit acidic (and I’m making my own with the coffee powder and an aero press, so I’m being all judgy). Idli were fine, but I prefer the ones at Dosa Hut outside or Adyar Anand Bhavan in Manhattan. Vadas were good, but again I prefer the ones at DH or AAB. The price at the canteen is the cheapest of the lot, though. 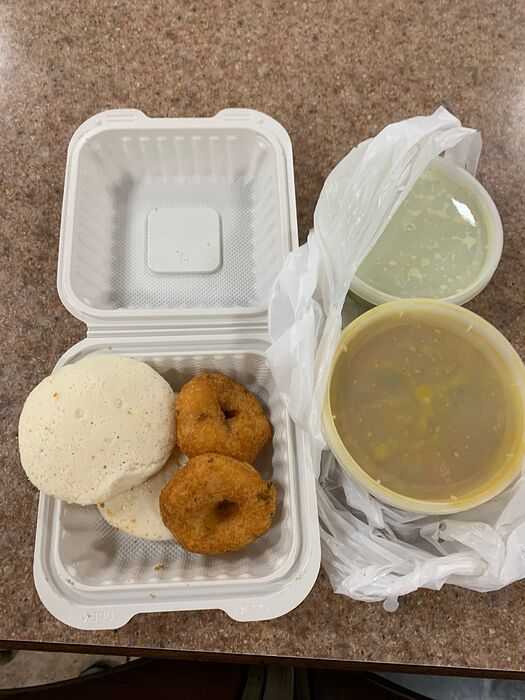 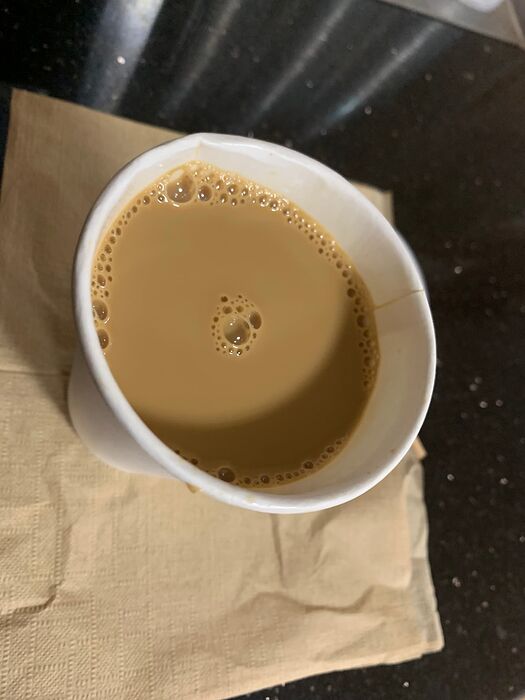 They were also giving away Prasad outside – savory and sweet in a takeaway box: bisibelebhath (rice, lentils, and vegetables cooked together), thayir sadam (yogurt and rice with tempering), kesari / rava sheera (sweet cream of wheat). 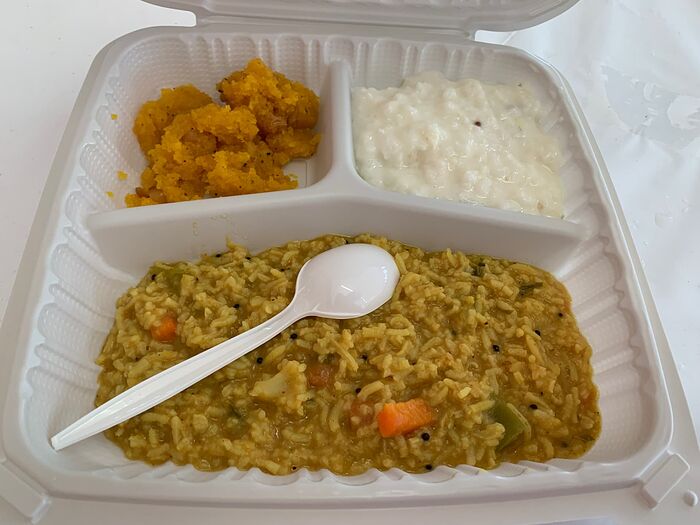 Distinctive Food / New York Food Court – Much busier than the last time, with a pre-dinner and dinner crowd. I got a bunch of food to go – Seafood Rice “Balls” (squares), Lions Head Meatballs (which @Dean had highly recommended), and crab and pork XLB (which I really wanted to try last time). The Lions Head are lovely - flavorful, soft, nit heavy, and not overdone on the star anise or 5-spice. The XLB were okay – lovely thin skins and a dainty size, but the flavor of the filling was not a patch on Joe’s or Kung Fu in Manhattan. 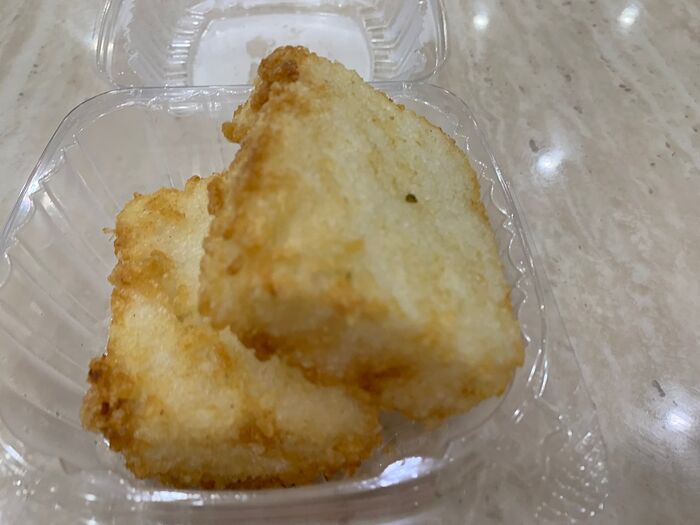 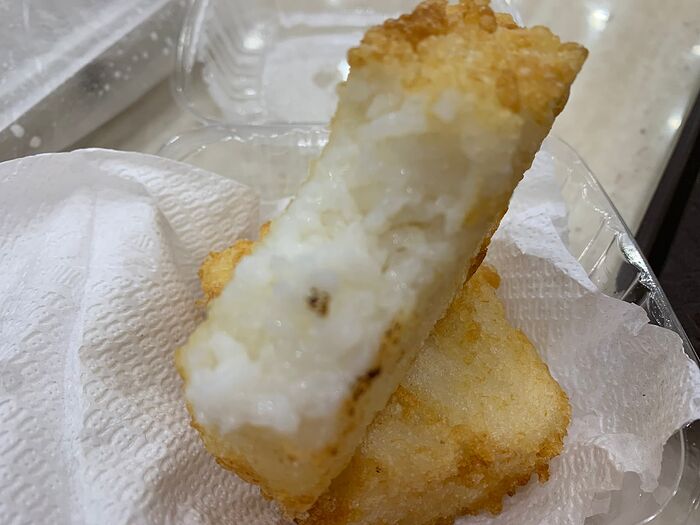 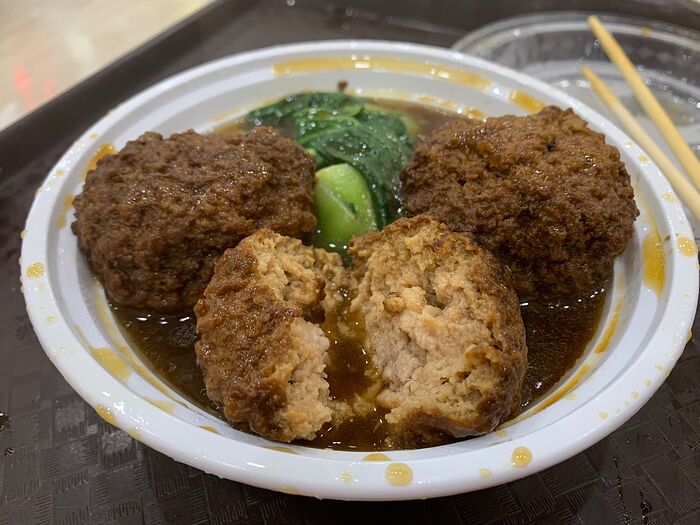 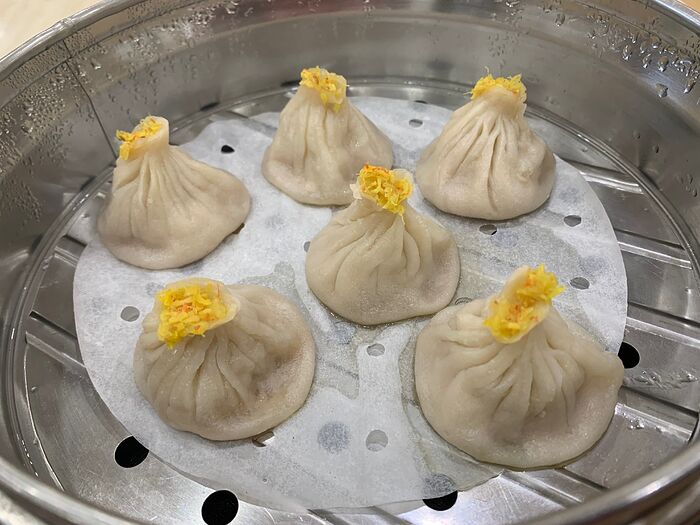 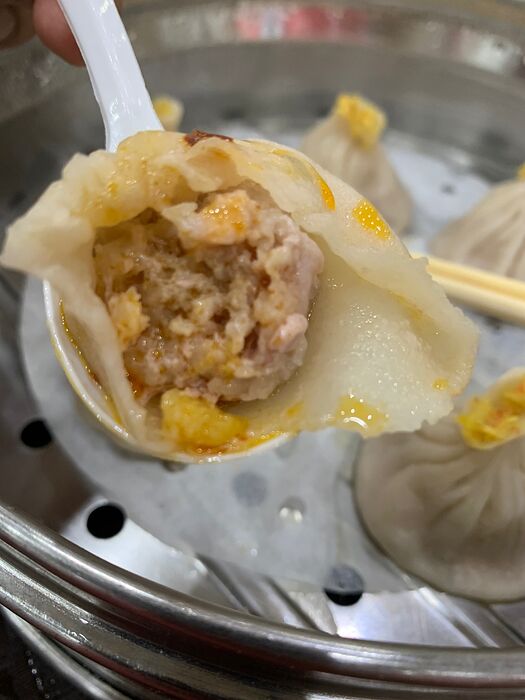 There’s a new gelato place right at the entrance of the mall – big crowd! 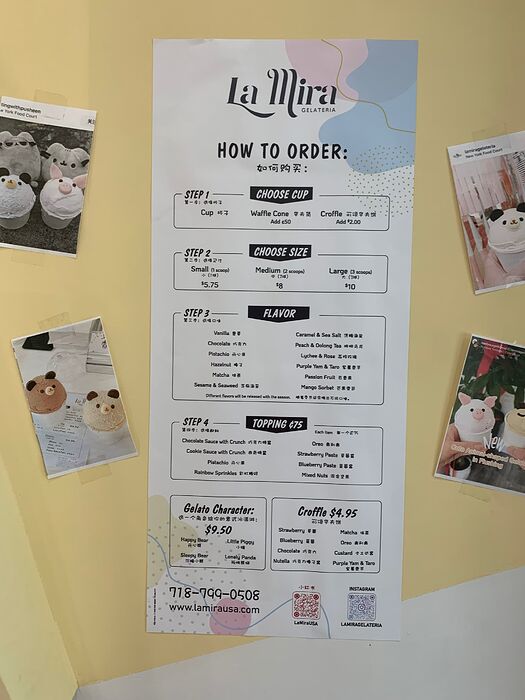 Pupusa Cart (corner of White Bear block) – Another miss from last time, but she had run out of everything but cheese, so I’ll have to go again next time. 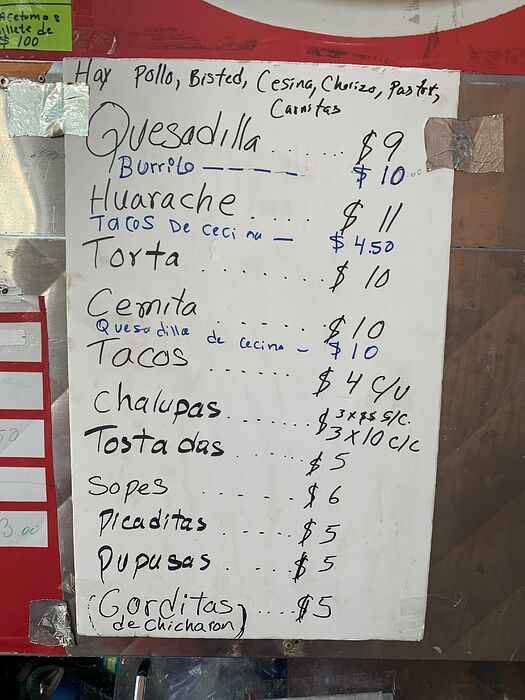 Skewer Cart (same corner) – The guy was just starting up, and I couldn’t wait, sadly. 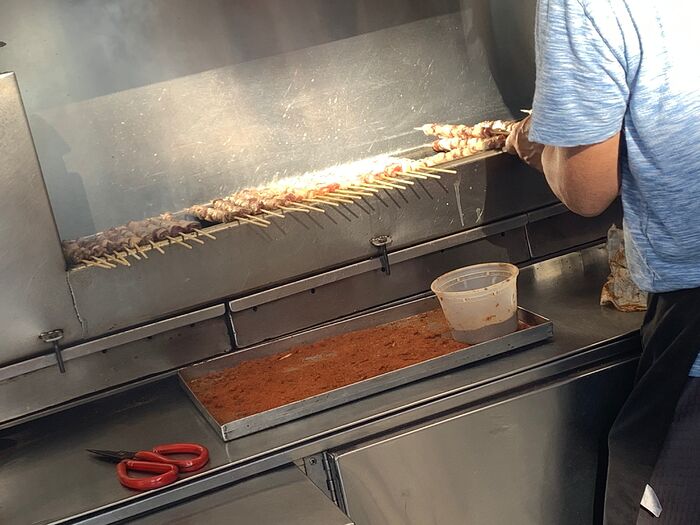 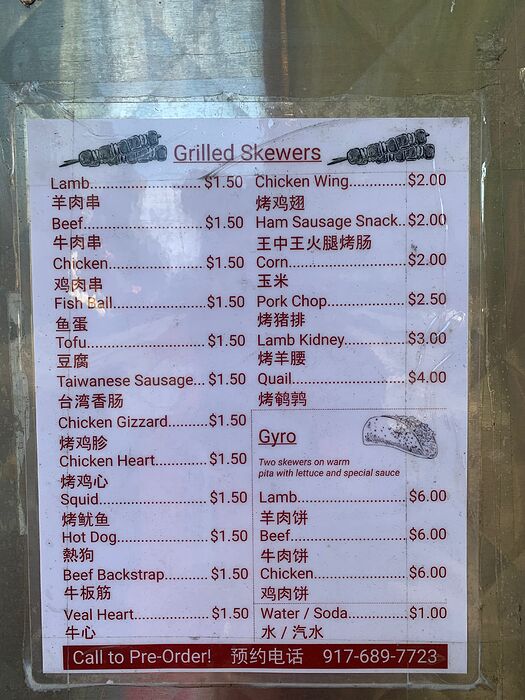 Maxi’s Noodles – An @Dean via @DaveCook rec. I went to get frozen wide rice noodles, which I assumed were ho fun which I have been in search of. But they were out, so I picked up frozen wontons instead (with helpful instructions from the lady on how to cook them). The wontons reminded me of the ones I ordered during the pandemic in CA, which is a very good sign. 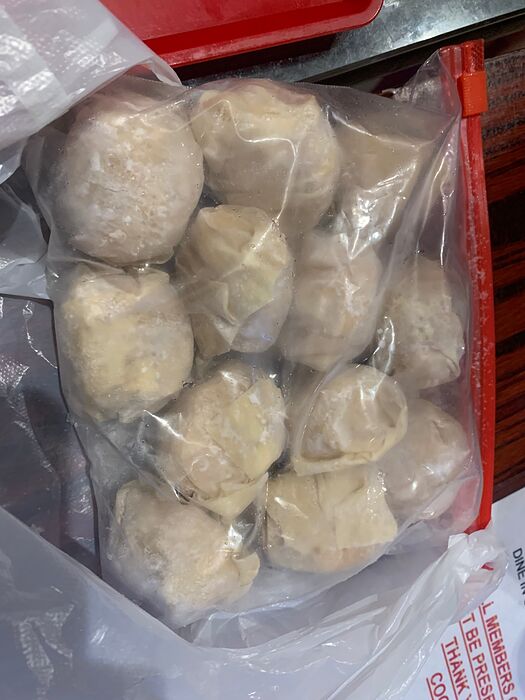 New Flushing Bakery – @vinouspleasure rec – but no sponge cake in sight. They did have 2 kinds of egg tarts, though (Portuguese and regular).

TSAoCAA(?) / Bake Culture – cute little bakery I passed on the way to Maxi and popped my head into to look for… yep, sponge cake. Success. Good sponge cake!

Followsoshi / Dumpling Garden outpost — I picked up frozen siumai for another day. 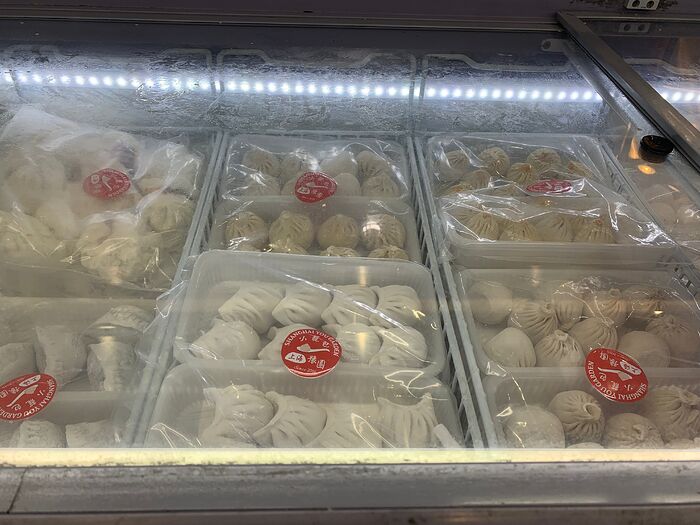 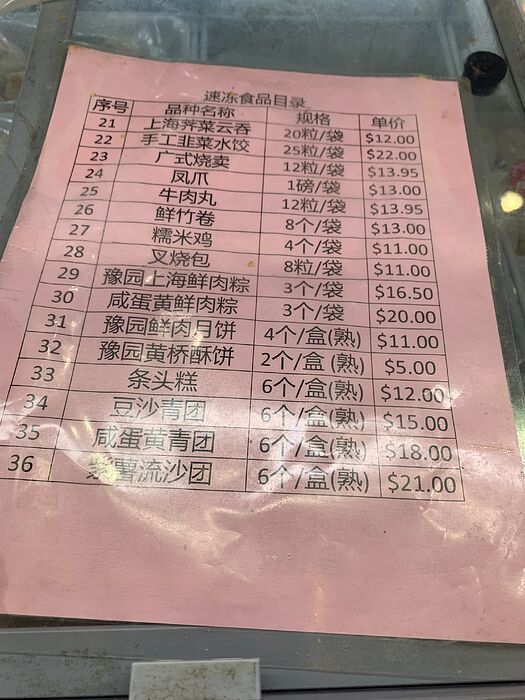 (It was pretty late by this point so I cut short my wandering and headed to the Woodside temple, where I walked right into the middle of a festival celebration – I had no idea there was something completely different today before the thing that starts tomorrow for a week. Haven’t been in that kind of crowd or festive atmosphere in a long time, and it was really lovely and happy. Still, mask on. Left with an apple!

Circling back on the Temple Canteen – I really didn’t love the idlis (bit dense and sticky, I can do that at home on my own, lol) but the vadas were good. Sambar was spicy and average in flavor, chutney was fine.

Next time I’ll skip it and stick to Dosa Hut outside, or just get my South Indian fix in Manhattan.

(I realized too late that I forgot the tastiest thing on the block – the giant Prasad laddoos that have to be bought on the way out of the temple. Got sidetracked by the Prasad box they were giving away.)

Cross posting so everyone who commented on this thread sees the next group dinner planned:

Paging everyone from NYC and nearby for our next HO Group Dinner — next Thursday 9/8 7pm or after at Uncle Lou’s in (Manhattan) Chinatown. If you’d like to join, chime in!