trying to write up a couple of things from my dogsitting adventures in Inman last week before I forget, though I probably should take a break before I do my Xmas eve Momi Nonmi visit since that place deserves a singular slot. In any case, I did also go for lunch at Highland Fried, the new joint that has replaced what was the second incarnation of East Coast Grill from the Highland Kitchen folks.

the concept is a sort of mashup of fried chicken and bbq with tiki cocktails, Since it was noon I passed on the tiki drinks, but it looks like they are mostly the standard things you’d expect though perhaps tweaked slightly–your mai tai, your suffering bastard, your navy grog et cetera and so on, priced in the 10 to 12 buck range.

chose the three piece chicken dinner for my lunch, fourteen dollars with a choice of one side and a buttermilk biscuit. It was a bit of a mixed bag, ultimately. The buttermilk biscuit was quite good, decently light and with a nice moist center. For a side I got the baked beans (the other picks were mostly the usual–mac and cheese, collards, creole potato salad et al) which I mostly thought were OK if a tad on the sweet side. The chicken itself was kind of variable, with the wing pretty good, the thigh not bad and the leg a little too dried out. The coating was seasoned fine, but the thigh and leg didn’t really have the shatteringly crispy exterior that I like in fried chicken. On this one time visit at least, I’d say the chicken overall was passable but not in anyway a standout.

The s.o. got a smoked beet salad that she had high praise for and also some cornbread that I tried and found to be competently done. The service was all handled well, the decor is kind of tiki room lite and the price point is reasonable. Probably will go back again to try the barbecue, though as with all New England barbecue, my hopes aren’t super high. Not sure I’d be super gung ho about the fried chicken next time around, though I’ll allow that it wasn’t bad and it may not be fair totally to judge on one lunchtime visit that I thought was middling.

Have you ever had the fried chicken at Highland Kitchen (which I found excellent but haven’t had in a couple of years)? How did it compare to that?

Have you ever had the fried chicken at Highland Kitchen

I have honestly never gone to Highland Kitchen. One would assume it should be nearly the same, but I personally can’t say for sure.

Not sure I’d be super gung ho about the fried chicken next time around, though I’ll allow that it wasn’t bad and it may not be fair totally to judge on one lunchtime visit that I thought was middling.

Wow, thanks for test driving Highland Fried. Sounds like HF could be worth a try, though not destination-worthy at this time?

I have a weakness for fried chicken because, in Pittsburgh where I grew up, the stuff is often served at big gatherings beside dishes like cabbage rolls and potato salad. And I don’t indulge in the frying arts at home.

The pulled pork is like that at Highland Kitchen: NC vinegar style. We love it and find it better than the last time we tried Blue Ribbon years ago. We always get extra sauce because we love the vinegar. If anyone is expecting the sweeter BBQ sauce common in New England, you might be disappointed. Highland Kitchen server years ago discouraged us from ordering the pulled pork, saying “It’s really vinegary, lots of people don’t like it.” We do, but then I’m from NC. I grew up with fried chicken and am not fond of it at all, so I haven’t tried that.

My husband and I went to East Coast Grill a week or so before they announced the changeover. I think they had already started offering items on the new menu as specials. I got the fried chicken thigh sandwich, which was a special, and see that it’s on the new menu. It was very good…crispy and moist. It was quite large for a thigh. I also got (very good) french fries. My husband got the pulled pork sandwich and fries and enjoyed both.

Our only complaint was that it was cold sitting by the cellar staircase, which made it difficult to relax and enjoy the experience, and there were no other two-tops available.

When was the changeover? I’m broadly clueless about most things, but was particularly so about this. It was only when I drove by today that I noticed the change.

I think it’s only been a couple of weeks since they actually changed names and, slightly, concepts.

I think two weeks is just about right. We asked our server a question he didn’t know the answer to, and he was really apologetic and said they just had the full menu a week ago. 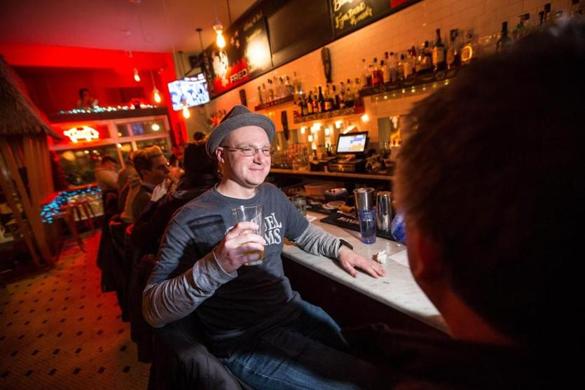 There are flickers of the old East Coast Grill: a few tiki-themed tchotchkes, flames on the chalkboards and along the walls.

To me this was mostly a rebranding and a shedding of the remaining seafood vestiges from ECG which they did not do justice to IMO. I will be interested to hear of other’s experiences at Highland Fried before giving it another try. I have found their (or the new ECG’s bbq) to be just OK on multiple visits, but there are certainly better bbq options in the area.

As for the fried chicken I have never tried it at this location, but as much as I love Highland Kitchen, I had hits and misses with their fried chicken. I do love fried chicken though, so I will remain hopeful.

I haven’t found better Eastern NC barbecue anywhere in New England except Prohibition Pig in Waterbury, VT (owner is from NC). Blue Ribbon was good years ago, no longer, to me. Sweet Cheeks is good but not better than Highland, more expensive and further away for me. Redbones has always been horrible. I haven’t tried Smoke Shop yet;heard their NC is not as good as their other types. I can’t comment on the other BBQ types because I gravitate to Eastern NC every time.

If you prefer vinegar bbq, your options in this area are limited. However, my issues with the new ECG’s bbq aren’t with the style but rather the meat. I had bbq there with no discernible smoke, and some dried out overcooked meat.

I think the best BBQ in the immediate area is Blackstrap (which was started by people from the original ECG).

thanks for the reminder that I need to try Blackstrap.

OK, we took the kids to Highland Fried and had a much better experience than when it was the ‘new’ East Coast Grill. All of the food we tried was good. The fried chicken was moist and flavorful, if a bit lacking in the crisp texture department as the OP pointed out. It was actually better than the fried chicken I have tried at the original Highland Kitchen. The burnt ends nachos were great, with chips that could stand up to all of the toppings. The burnt ends themselves had good smoke flavor. The ribs were cooked perfectly (not fall off the bone, but pull off the bone with good chew). The cornbread wasn’t overly sweet and had the corniest flavor of any cornbread I have had in awhile. I liked that. The biscuits were just OK, but honestly it’s hard to have any biscuit without thinking how much better the Sweet Cheeks biscuits are.

Service was prompt and friendly, and all the staff in the restaurant was extremely welcoming to the children there. They obviously enjoy and want families in there. Prices were quite reasonable for a family dinner. Add Joe McGuirk behind the bar as a big bonus draw.

The space is largely unchanged but something about it felt a bit sterile, probably the ghosts of the original ECG.