got in the car today knowing, thankfully, that Heng Lay would be open for lunch. Staying in Medford this week, so it’s really not a bad ride–just about a half hour or so. Arrived a little before noon but the place was pretty full already, though had no trouble being seated. My food took a while to come out (but since I was in no hurry this wasn’t an issue) and when it did come it was sure worth the wait. Had the sweet and sour chicken soup, and it was fantastic, especially on a cold day like today. Scallions, Asian basil, tomatoes, pineapple, big chunks of chicken in a delicious sweet/sour broth that smelled of galangal and was clean tasting. There was also a white tubular vegetable in here that added some crunch, that I’m not quite sure what it was–it seemed sort of like heart of palm but had a lot more tensile strength than that usually does. There was also a crunchy topping that appeared to be maybe something akin to a candied chicken skin or something along those lines…in any case, this is an amazing, complex soup with a whole lot going on in it. Highly recommended.

Also had the sadout salad with pork belly. My cursory internet research seems to indicate that sadout (aka sadao) comes from a tree more commonly known in India as neem, and the part used in this dish appears to be the flower buds and some of their accompanying young leaves. The rest of the salad consisted of cucumbers, red and green peppers, Asian basil , bean sprouts and some crunchy battered and fried pork belly. Here again there was a great contrast of textures and tastes, though be warned if you don’t much like bitter flavors as the sadout is really fairly extreme in that department. A really interesting and unique dish if you can handle that, though, and I’ll post my mediocre picture of it below for reference’s sake.

Even though I was full already, since I don’t get to Lowell much I thought I’d make a few stops. After a brief bit of architectural nerdery stopping by to look at the totally cool Jonathan Bowers House, I headed to 100 year old Cotes Market to pick up a salmon pie and some of their baked beans. I’d heard that this old landmark was up for sale last year but near as I can tell it’s still going strong cranking out pies, brown bread, Italian wedding beans and such and operating as a classic neighborhood market. The pie is headed for the freezer, but I tried a spoonful of the beans and they were good and on the low end of sweetness scale where I like them.

After that, I swung by the Athenian Corner and picked up some grape leaves for later. It was kind of deserted in there, but the grape leaves looked good when they came out and hopefully will reheat OK for dinner. (I resisted the temptation to chow one down in the car, and I hope you’re all impressed by my restraint).

I really wanted to go and walk around a bit in the Andover St Historic District and go to a couple more places, but given the ridiculous cold I decided to just go to one more spot and then light out for home. Last hit was Hong Cuc Grand Eatery, a small market with takeout banh mi and coffee and a good selection of assorted other Vietnamese snacks. Got a pork roll banh mi and an iced coffee to go, it seemed sort of insane to drink an iced coffee today but well, that’s me, and what the heck it was good to drink on the drive home. I’m just now eating a part of the banh mi for an afternoon snack and it’s pretty nice–pork roll, pate, carrot and cuke etc on a crusty roll. One big minus is that I asked for spicy and got no kind of hot peppers of any kind, I kind of think the lady who made my sandwich didn’t understand I wanted chilies/jalapenos or whatever it is they use. Partially this is my fault–I wasn’ t really watching her make my banh mi, I was wandering around looking at spring rolls, the Lays honey butter chips and the case of Vietnamese pate. Next time I’ll pay more attention. The younger woman who rung me up and made me a delicious coffee was super nice though, and I also have to point out that this place is really kept spotlessly clean. Would love to go back and try some of their other prepared foods and bahn mi at a later date. 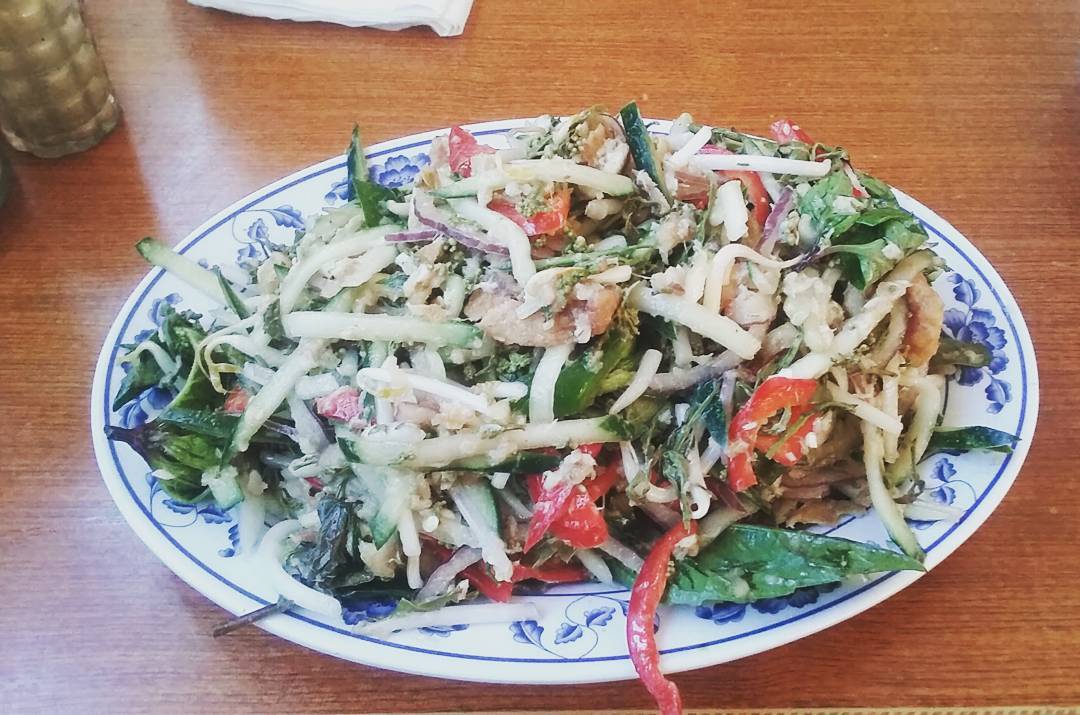 The wings at Heng Lay is fantastic. I usually have the combo Banh Mi at Hong Cuc and I get jalapenos. The bread is fantastic. What’s the price now? The BBQ Beef one was the most expensive at $4.50, but that’s a few years back. I have forgotten how good they were!

I wanted to do the wings or fried squid too, but as a solo act two dishes was the most I could handle. The pork roll banh mi was $4.50, and I think the bbq beef now might be a fivespot? Not totally sure about that.

The no peppers thing was just a combo of a server who I don’t think spoke of lot of English and me taking my eye off the ball. If I had been a little more attentive, I could have made sure I got what I wanted. A minor misunderstanding.

sadao are the bitter flower buds of the neem tree

the “white tubular vegetable” in the sweet and sour soup (somlah machoo yuon) is lotus stem. the crunchy topping is caramelized garlic

the “white tubular vegetable” in the sweet and sour soup (somlah machoo yuon) is lotus stem. the crunchy topping is caramelized garlic

ah, thanks. that makes total sense now! I loved the caramelized garlic topping.

I tried a spoonful of the beans and they were good

I ate the rest of these Cote’s beans for dinner and they were actually kind of salty and not that great.

In the meat pies department, Thwaite’s Market in Methuen has a wider selection than Cote’s. I preferred the former’s rendition, but only visited either of them one time, and close to a decade ago.

I’ve always wanted to go here. Some day I need to make a Lawrence/Methuen tip. Maybe in the spring…

I actually did thaw out my salmon pie from Cote’s a couple weeks back. It was pretty good!

I’ve always wanted to go here. Some day I need to make a Lawrence/Methuen tip. Maybe in the spring…

When you go to Thwaite’s, make sure you take the time to taste the crust while the pie is hot. It is super tender and delicious. It’s great reheated later on, too, but heavenly while warm and fresh.

I hit them the other day and I must report that the fantastic spicy wings now have morphed into sweet and sour wings. I did order the normal chicken wings and they were cooked perfectly. I had the Chicken Spicy Sour Soup ($12.95) that was sour and very tasty. Tons of tender dark chicken meat. It also had Thai Eggplant and that made me very happy. When the owner asked how the food was, I complained about the lack of spicy, and she said the spicy was what made the soup yellow. She then proceeded to give me some sliced up Thai Chili so that took care of the spicy. The soup was fantastic. 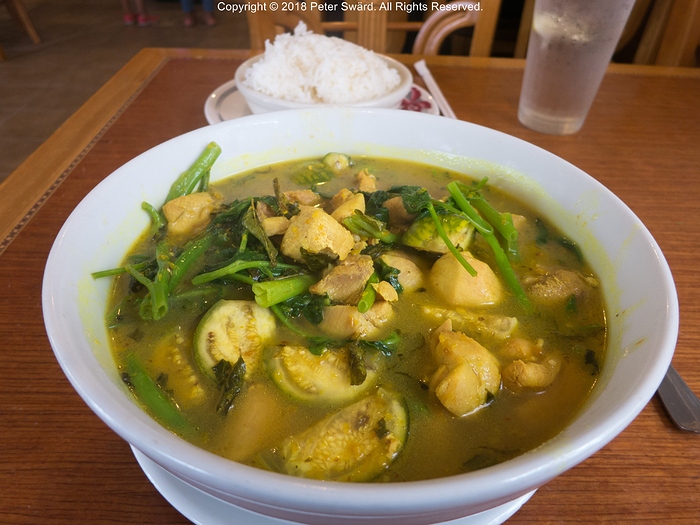