The bar has been set. Quite possibly the best restaurant in the state in the former Hotel Tides that has been reimagined into a setting that screams international panache. David has knocked it out of the Asbury Park. From the exotic dark bar in the front, to the open airy kitchen slash dining area in the back, the place screams sophistication and efficiency. And the food. And the drinks. Everything in the nj.com article is accurate. We cannot wait to go back. 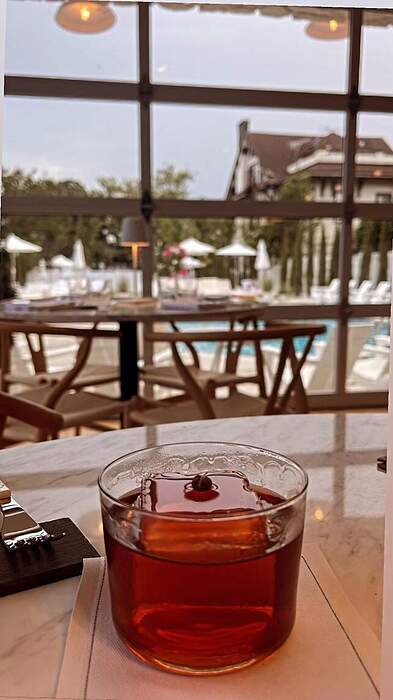 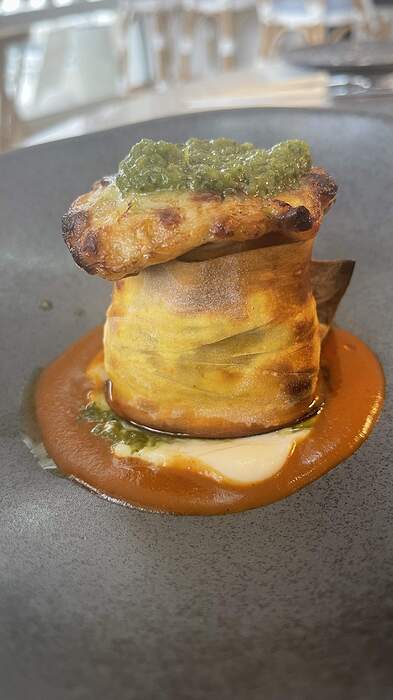 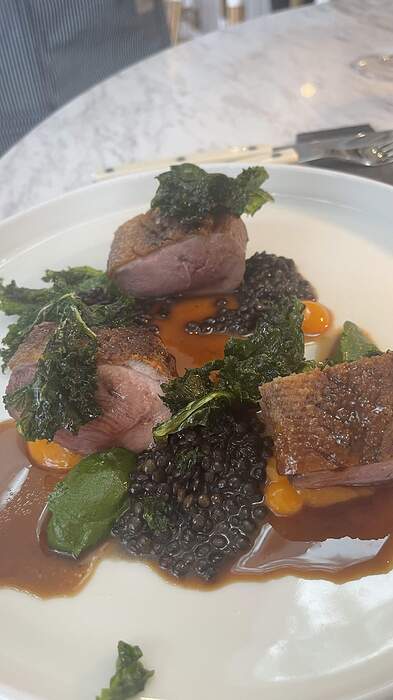 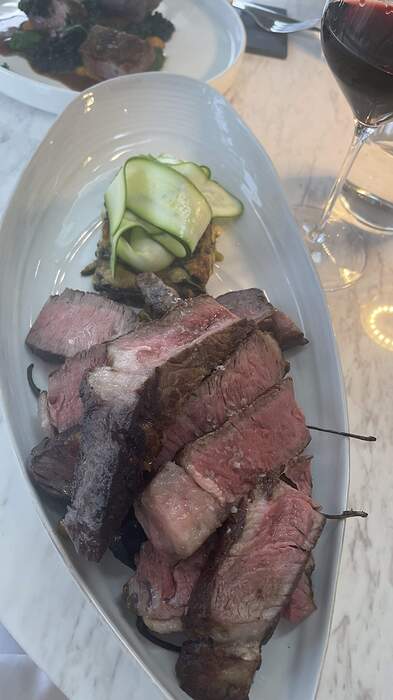 Forgot the scallops and the bar. 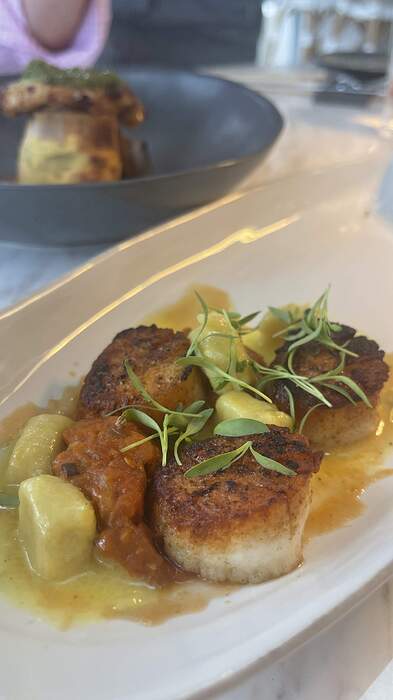 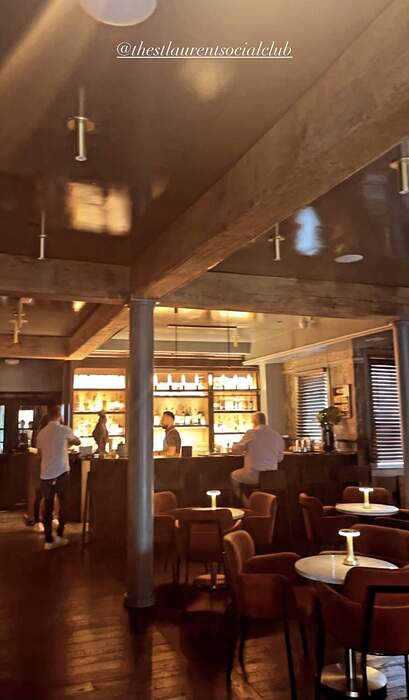 Woke up to a text yesterday morning that said “We’re in AP. Can you join us for dinner tonight?” Um, YES. Because this was a rescheduled dinner at Heirloom from earlier in the summer.

I didn’t take ANY pictures - too busy listening to my friends rave about how they haven’t had a meal this good since they moved out of NYC last year. These are world traveling foodies and excellent home cooks, so while I wasn’t surprised by their reactions, it was still fun to witness.

There were 5 of us and it looks like we had many of the dishes that @coldbeer70 posted up above; for the 1st course there were the hen of the woods (+maitake?) mushrooms, a gem salad, steak tartare, and scallops on the table. I would absolutely order the mushroom dish if I got back there again during the current season’s menu, but everything was amazing. My friend w the tartare said it was the best he’s ever had.

We ordered the rib eye for the table; it may be the best piece of red meat I’ve had, and the zucchini gratin that came with it was fantastic too. It also came w a bowl of smashed fingerling potatoes in lobster butter, which I couldn’t try due to a shellfish allergy, but eyes were rolling to the back of peoples’ heads, so…

For entrees, two of us had the duck (w black beluga lentils); two orders of the pork w a fantastic dry rub (inspired by Chef Rob Santello’s trip to Jamaica), and the swordfish dish. Plates were cleared and in my case, I have leftover duck for dinner tonight, because… RIB EYE.

The desserts were stellar as well. If you know me, you know I don’t have a big sweet tooth (I usually prefer to drink dessert), and don’t care about chocolate. But I almost ordered the chocolate dessert because it involved a tahini blondie. Since my friend ordered it, I went with the olive oil cake, which had some of the most interesting sauces I’ve had on a dessert item - including dots of a spicy aji sauce that was stunning to look at AND, when mixed w the gelato and eaten w a bit of the small cake, was perfect. The spice/heat just worked, and we were all amazed by it. I got to taste the blondie and OMG. The salt and sesame… YES PLEASE. I could just eat those with coffee or the equally impressive espresso martini, which isn’t sweet at all, and iirc (there was also wine during dinner) didn’t even contain any dairy.

After dinner we went in to the lounge area, which is dark and clubby (def a major contrast in decor vs. the light/airy restaurant space, but that’s not a complaint at all). I spotted a bottle of Amaro behind the bar, asked the bartender about cocktails made with it, and he offered one with orange bitters and…something else I like. It was marvelous and I’d have that again in a heartbeat too.

This is an expensive night out. The 3-course prix fixe is $89pp. My wonderful friends bought dinner so I only paid for drinks afterwards, but I can honestly say it’s worth every dollar for a special occasion, or - make a reservation for a seat in the lounge. The cocktails are priced just as they are everywhere else in town. (And I overheard that they don’t want to have to take reservations for the lounge, but in order to make sure they have enough staff on hand, they have no choice right now.) The lounge was full when I left at midnight, so people don’t seem to mind!

Thrilled to have this a block from home and look forward to getting back there. Keep it in mind for a special occasion/splurge. And for those who are wondering, dress was everything from shorts and jeans to people who were really decked out. It’s still a beach town, folks!

Glad you had such a wonderful experience at the St. Laurent.

I’ve been wondering if the two locations have the exact same menu since there’s only one menu on the website. Based on your review, it appears not. For example, your the duck came with lentils; in O.B., accompaniments are different. Also, no ribeye, no hen of the woods (nor any other mushroom dish), and totally different desserts. They really should post the St. Laurent menu on the website because only posting the O.B. menu is very misleading.

Even though the O.B. location is only 10 minutes from our house, if there is outdoor seating at the St. Laurent, I would go there because the menu sounds more upscale and more intriguing.

Edited to add: I just called. There is no outdoor seating for dinner at the St. Laurent.

I have reservations for a friend’s birthday in October! Very excited!

Sounds great! I definitely want to go once I am more mobile and have my handicapped parking placard!

I was disappointed that the menu isn’t posted on the SL website… I was too focused on conversation to even take photos of it and assumed I’d find the full descriptions online.

WOW I remember when MRS Jay’s was the place in Asbury . FWIW Wonder Bar still makes the best burger in town .

Had one last weekend (w onion rings, of course) and I concur!

Compare and contrast to: The Galley; Nicholas; Frankie’s in Point. Inquiring minds and all that.

I don’t go to the Galley and haven’t had burgers at the others. I can’t imagine their price compares to WB either - but it’s a great burger separate of the price.

So did I hijack this thread? GOOD , Lets go further … remember when Harry’s Roadhouse was THE place on COOKMAN. I am not a fan of frou frou food in Asbury Park, Hell it took me years to accept Taka. And yes @CurlzNJ you are 100% correct on the Wonder Burger.Frankies used to be good but new ownership has destroyed that place IMO. Galley a johnny come lately no comparison to WONDERBAR.

I had lunch at Frankie’s after the takeover and renovation in the spring. I found everything about the same as it had been, only a bit more shined up. Not only that, but I thought the new ownership did a great and gentle renovation. I don’t go to Point in the Summer.

Frankies was bought by the group that bought The Cabin in Howell & owns Moore’s Tavern in Freehold although both are widely known for mediocrity I tried Frankies just before Memorial Day, it held true to form on a culinary level but the physical place was ok.

Moore’s Tavern as well as the Mexican place next to it used to be owned by the Lombardi brothers/cousins from Edison. Not sure if they are still the owners, do you know if that’s them?

I was checking out the SL website and noticed this message:
"*Please note the St. Laurent Social Club is a 21 + property. Our Cocktail Lounge is open for walk ins only, please feel free to stop in for a drink before or after your dinner! We are also a cashless property and lastly all deposits for reservations are non refundable 3 days prior. "

So even for the restaurant, I cannot bring my teenagers to eat there?

Chef’s International out of PPB owns them as well as 12 other places. Most of them are indistinguishable from each other except for location.

Chefs International manages fine dining restaurants and banquet halls along the New Jersey Shore and Florida Coast. We pride ourselves on exceptional quality and a passion for making your experience fantastic!

I honestly don’t know, but I wouldn’t be surprised if that’s the case. Definitely worth a call to ask them, though.

They just posted the dessert I had on Saturday… it’s Olive Oil Cake with citrus yogurt, aji amarillo, and passionfruit.