This was our third visit to Easy Fish. There was a king prawn cocktail to start – actually a sort of deconstructed one with the various ingredients on a plate rather than piled together in a glass in traditional fashion. It’s not an improvement on the traditional. There is lettuce but only a little bit and not enough to give crunch. There’s no Marie Rose sauce and what is a prawn cocktail without Marie Rose? The other starter was better – barbequed octopus. It had been long cooked so that it was meltingly soft and then given a quick blast to give it a charring. Samphire and thinly sliced radish do give crunch and a carrot puree acts as a pleasant , if slightly odd, sauce.

Grilled plaice was a well cooked fillet and samphire worked well with it. However it was let down by a butter sauce that formed something of a lake on the plate. Sea trout was a fish I’d never eaten before. I enjoyed its salmon-esque texture and flavour. And the kitchen had given it a superbly crisp skin. There’s fried mushrooms, tiny new seasons broad beans and samphire – these are good. But there’s another let-down with the “whipped” potato – it has no texture and is almost a sauce. Just not very nice at all.

I’m still looking for a place which serves a prawn cocktail the way I remembered it from the 60s/70s - i.e. a circle of prawns perched around the rim of a tall glass.

Beautifully descriptive writing … I could almost see and taste the meal

I’m still looking for a place which serves a prawn cocktail the way I remembered it from the 60s/70s - i.e. a circle of prawns perched around the rim of a tall glass.

A reason to visit NYC 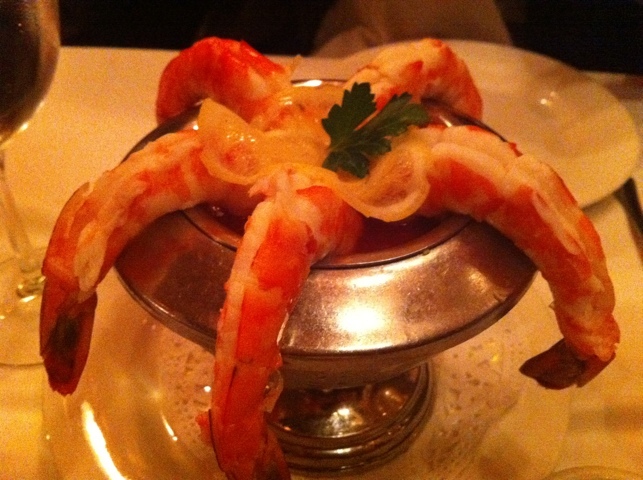 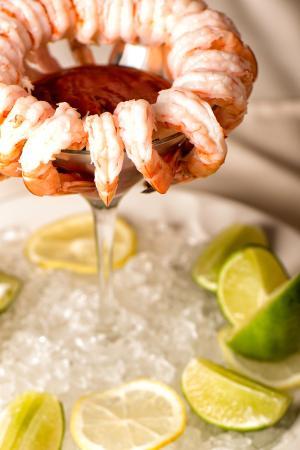 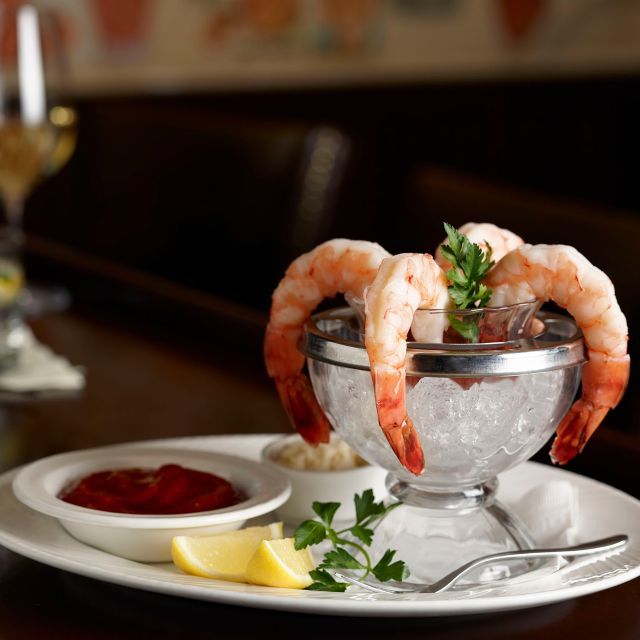 We never got those in the Berni Inns in the 70s (my then experience of a “good” restaurant). It was the usual small prawns drenched in Marie Rose and sat on some shredded lettuce. Came in a big glass, of course, where you could play “hunt the prawn”.

It was the usual small prawns drenched in Marie Rose and sat on some shredded lettuce. Came in a big glass, of course, where you could play “hunt the prawn”.

My Danish stepmonster made a mean version of this shrimp cocktail … to this day it’s my favorite shrimp prep. 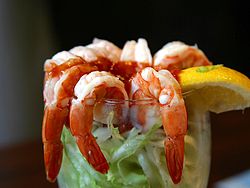 Prawn cocktail, also known as shrimp cocktail, is a seafood dish consisting of shelled, cooked prawns in a cocktail sauce, served in a glass. It was the most popular hors d'œuvre in Great Britain from the 1960s to the late 1980s, and also in the United States around this time. According to the English food writer Nigel Slater, the prawn cocktail "has spent most of (its life) see-sawing from the height of fashion to the laughably passé" and is now often served with a degree of irony. A dish of co... 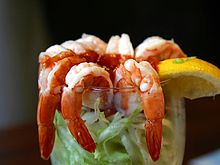 Prawn cocktail, steak garni with chips, and Black Forest gâteau was, according to a survey by trade magazine Caterer and Hotelkeeper, the most popular dinner menu in British restaurants in the 1980s. It was especially associated with the Berni Inn chain which popularised mass-market dining out after the end of food rationing in Britain, following the Second World War. The Prawn Cocktail Years, by Simon Hopkinson and Lindsey Bareham, called this meal the Great British Meal Out. Laura Mason in ... 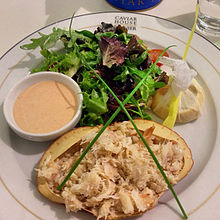 Marie Rose sauce (known in some areas as cocktail sauce or seafood sauce) is a British condiment often made from a blend of tomatoes, mayonnaise, Worcestershire sauce, lemon juice and black pepper. A simpler version can be made by merely mixing tomato ketchup with mayonnaise. The sauce, as well as cocktail sauce, were invented in the 1960s by British cook Fanny Cradock. It is often accompanied with seafood, and prawns in particular. In the United States, a similar sauce, fry sauce, is sometime...

Thank you for the links
We make it with ketchup, mayo, celery salt, worstishire, sherry, cayenne and lemon sometimes chili sauce.
I also love crab Louis with its similar sauce it’s also considered old fashioned and rarely seen on the east coast. Still popular on the west coast.

Speak of the little devil - was at Daniel Boulud’s DB Bistro at Marina Bay Sands in Singapore this evening when I saw Prawn Cocktail listed as one of the appetisers on their menu. Just had to order it and look what I got - voila! 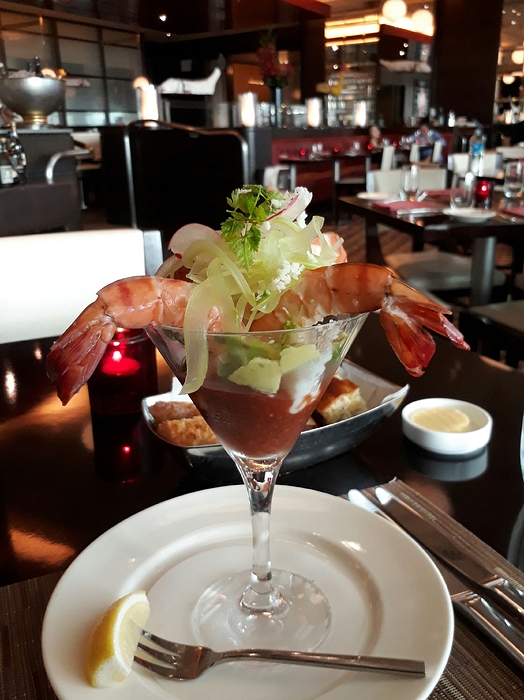