Has anyone seen this dish in the SFBA?

Hi All, I’m on the lookout for a dish we used to enjoy at Mary Chung in Cambridge, MA . The English transliteration is “Suan La Chow Show, pork wontons on bean sprouts with spicy, hot and sour sauce.” Item 24 on the menu below.

The dish is a bowl of steamed pork wontons on a bed of mung bean sprouts. The sauce includes a generous dose of black vinegar, spicy sesame oil and I don’t know what, if anything, else. I have taken the menu with me to show the server at a few places in the South Bay (including Da Sechuan in Palo Alto and the late great Golden Garlic in Cupertino.) Haven’t had any success thus far and am wondering if anyone here may have seen it somewhere in these parts?

Thanks in advance, Reuel 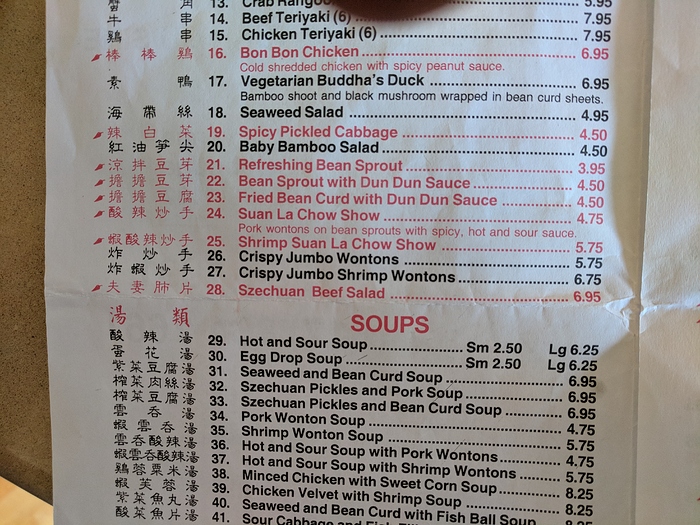 I’ve had “Sichuan Red Oil Won Tons” at the Peking Duck in Palo Alto. They’re near the Cal Ave train station, not far from Da Sichuan. I’m not sure if that’s what you’re looking for - I don’t remember any bean sprouts, and there may or may not have been vinegar in it.

This dish sounds like its a variation of the sichuan red oil won ton that Joe mentioned, plus vinegar and bean sprout. That is 紅油抄手, which is common. If you tell them you want that plus black vinegar you may have better luck. 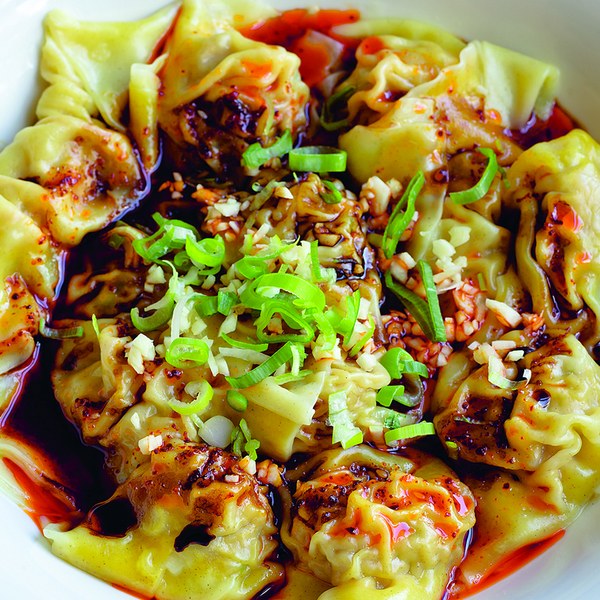 Of all Chinese dumplings, wontons are the simplest to make, if you buy ready-made wrappers. They cook in minutes and have a delightfully slippery mouthfeel. In Sichuan, the source of this recipe, they are known as "folded arms" (chao shou). Some say...

I do not know of any who makes this version around here but you could ask them to. It is a fairly common preparation in Szechuan.
Perhaps this will help
Here is a recipe for the Sauce:
1 Teaspoon Ground Roasted Sichuan Peppercorns
3 Tablespoons Hot Oil with the Solids
1 Tablespoon Roasted Sesame Oil
3 Tablespoons Chinkiang Vinegar
2 Tablespoons Light Soy Sauce
1 Tablespoon Sugar
Combine. Pour over Wonton (and Blanched Bean Sprouts for you).
Top with:
1 Tablespoon Grated Fresh Garlic
1 Tablespoon Toasted Sesame Seeds

Thanks, this really sounds like the sauce! I’ll make it and see, really appreciate your help!

I’ve never seen this preparation locally or bean sprouts underneath any Sichuan dumplings in the Bay Area. Sounds like a way to reclaim some of the sauce/dressing that’s often left behind in Sichuan dishes.

Some local restaurants have two different Sichuan dumplings, and the sauces lean more towards chili oil than vinegar, but vary from place to place – – The more common dumpling uses wonton skins crossed like folding arms (手 “hand” is the character to look for, and these are at non-Sichuan places like China Live too ). The other variety is crescent shaped, typically with a fatter dumpling skin.

There’s a Wikipedia article about the dish as served in Boston https://en.m.wikipedia.org/wiki/Suanla_chaoshou

That and other descriptions of the Boston dish mention ginger and chilies flakes/oil as an ingredient in the sauce. In contrast, Fuchsia Dunlop’s Land of Plenty has a Suan La Chao Shou sauce recipe made from soy sauce, black vinegar, lard or peanut oil, sesame oil, scallions, stock, and black or white pepper (her recipe for the red oil sauce doesn’t have vinegar, but you can use your imagination)

And 3 blocks to the north of Da Sichuan is Dumpling City, where you can buy just-wrapped wonton fresh or frozen. Get the version without shrimp. 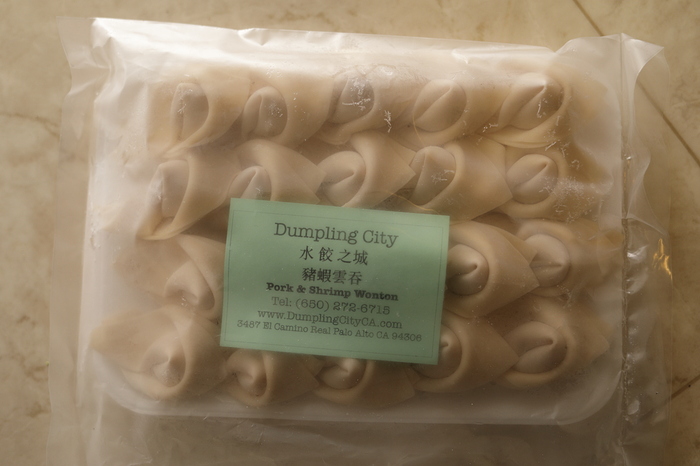 Yes, I saw the wiki piece on Mary Chung. We went back last summer, 20+ years later, and the Suan La Chao Show was just as delicious. She was still there too.

Thanks for the Fuchsia Dunlop reference, I’m ordering a copy now. Best Reuel.

Let’s us know how her recipe matches to Mary Chung’s!

It’s a great book, for reference or cooking. The homemade chili oil was a game changer for me (I supplement it with some additional spices and Italian chili flakes). For more obscure ingredients: Sichuan ingredients (SFBA)

The sauce, as described, sounds like the concoction often served on the side for dipping jiaozi and wontons (as well as for the bland pork in soups like yanduxian). I’ve never seed May Chung’s version sold as street food in Shanghai, but it makes sense to serve the wontons or dumplings already sauced in a single container in a street food setting, and the bed of bean sproiuts may be to keep the skins from being saturated with the sauce instead of just being kissed by it.

Made BierMonk’s sauce tonight. Bought fresh chive & pork dumplings from Fuji Huoshao & Dumpling in San Jose. Served on a bed of bean sprouts and sprinkled with chopped scallion and toasted black sesame seeds. Many things here make me happy, thanks to all for your thoughtful input. 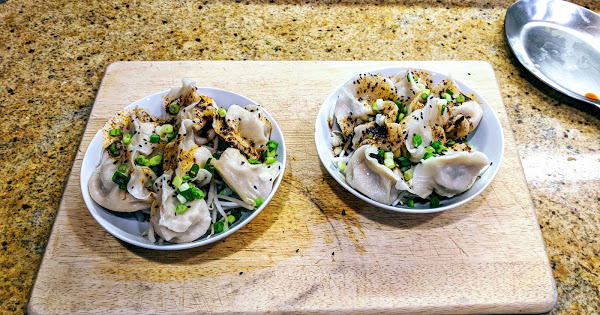 All in all a worthy effort and thanks again for everyone’s contributions.

Great. It is all adjustable. I use less Garlic, and more Chili oil, Vinegar and Szechuan Pepper.
The Fuschia Dunlop Recipe serves it in a Stock that is strongly flavored and has a big slick of Chili oil floating on top. If my Memory serves me. Also a common way to see them served and they stay hotter longer.
Do try the Pork wrapped in Lotus Leaves really fragrant and delicious