I’ve been eyeing this Vegas-y upscale Chinese place since it opened, especially the dim sum brunch. Their irritating habit of not posting menu prices on the website (and the prices themselves, which I found elsewhere) kept me away for a while. But I recently discovered that the prices are now online, and I had occasion to be in the area, so voila! Dim sum brunch at Hakkassan. We ordered six plates, one of which I avoided ‘cause it had chicken and sausage in it. The five I did try ranged from pretty good to excellent. Shrimp & chive dumplings were stellar, beautifully springy shrimp in a delicate wrapper. Not much chive in evidence, but it didn’t really matter. Cheung fun is one of my favorite foods, and the mushroom version I had was faultless, as was the morel mushroom dumpling – a chubby, un-pretty disk in a translucent skin that looked not unlike a mushroom cap, and maybe that was intentional. The seafood puffs and vegetable dumplings were less successful. The puffs had a lovely pastry crust, and the dumplings a crisp, grease-free shell, but both were stuffed with an oily, pasty mush that didn’t taste like much of anything. Blindfolded, I doubt I would’ve been able to tell the fillings apart. 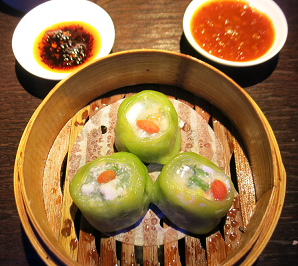 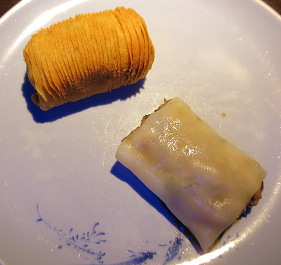 I hated the service, so much so that I’m annoyed with myself for tipping 20%. Here’s how it went: Super-nice hostess leads us on an extremely circuitous route from the entrance to our table, which makes me think that I might need the GPS on my phone to find the ladies room. I discover later that our table is really just one left turn from the entrance. The labyrinthine march was a silly conceit. Other silly conceits follow. Our server does a big flourish-y menu presentation – have you been here before? no? well, here, the cocktails; here, the wine list; here, the full menu; here, the dim sum menu, and there are dishes you won’t find anywhere else! (He does not mention any by name.) Minutes pass. More minutes pass. Our tap water arrives, and – spoiler alert! – is never refilled for the duration of our stay. Still more minutes pass. The server returns and starts the exact same spiel again – have you been here before? I cut him off. I’m not proud of this, but come on. The (6) menus are lying on the table. Does he think we carried them in ourselves? We don’t see much of our server after that. We are presented with several (very nice) sauces, but not until the second round of dim sum, and maybe this is the way it’s supposed to work, but I doubt it. We are served chicken dumplings instead of vegetable, and while the runner who drops them is very apologetic about the mistake, we don’t get a replacement until twenty minutes later. I have to flag down another runner to get our check, and then I have to flag down the hostess, who is wandering aimlessly through the dining room at this point, to get the check picked up. She is not super-nice about this.

If you stick to beer or iced tea, and you don’t over-order, you can have a pretty reasonably-priced, elegant brunch. I would definitely return, as there are plenty more dim sum items I’m interested in trying. Next time, I’ll sit at the bar.

Looks like the people in the kitchen know what they are doing, but not the rest, they don’t seem to be very professional, quite vain and pretentious and hoping to sell you the maximum.

The upsell was a factor, but that bothers me less than the pretense of solicitousness (the enthusiastic welcome, the theatrical presentation) juxtaposed with inattention and poor pacing. If you’re going to charge fine dining prices, then give me fine dining service. We all know that I’m not paying just for the rice and mushrooms.

We ate there once. I recall the maze of paths and alleyways. The service and food were pretty good. What got me was the noise. If two people can’t communicate, I don’t see why I should eat there.

What got me was the noise.

On a Sunday afternoon, it was quiet. But I’m sure it morphs into untz untz untz mode at other times.