Well I was intending on going to Noodles at the Monmouth Mall however they are no-more, so into the food court we went. It’s been awhile since I’ve been there and there has been some turn over, salad works-Nathan’s-and whatever was the Gyro Chef are all gone. BK-Pizza-ChikFla-2 Asian-Cajun Chick and the Gyro place now make up the food court. (Nathan location still vacant)

Anyway I decided to try the Gyro Chef since we are all into the local Greek scenes lately and see if the mall adds to our already impressive line up. In a word; No, it doesn’t.

I tried to get a lamb/beef Gyro in the typical pita type bread, instead they only offer a wrap or platter. I chose the platter because it was served on a pita type bread. Well it wasn’t a pita, it was more or tortilla like a burrito and the platter was served with rice. I believe they use the same for the “wrap” as well.

Anyway I ate a little then wrapped it up like a giant Greek burrito and ate it that way. I wasn’t terribly impressed however I will say the meat was VERY flavorful and had a very distinctive lamb flavor. While the tzatziki sauce was very weak and the rice threw things off the meat was truly exceptional.

I would try it again as a wrap but I can’t suggest going out of your way to try this instead of Greek Eats or The Greek Spot. If your in the mall and are in the mood it’s there for a try! 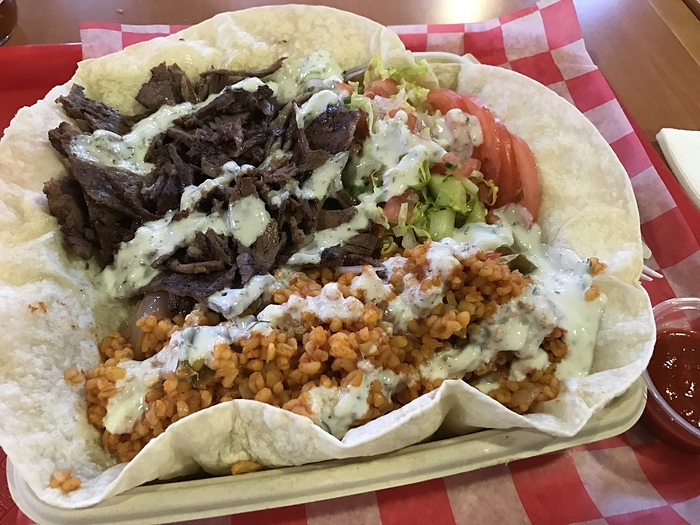 I really need to hit the g spot. Greek eats is closer to me and I really like that place. I almost feel like I’m taking advantage of them. They will freaking LOAD your plate up if you ask them to. I get like half a pound of feta on my plate lol

Lol… I feel the same way. Last time there I was laughing at how much they put on my meal. I tend to justify it to myself since I usually like 30 min before close. Def need to find the g spot as well, every time we go to wegmans I gaze longingly as we drive bypass

I can’t promise the same portion you guys get but I do think the gyros are equal between them, with the g-spot being $2 cheaper. The G spot kills it with other Greek meals, the lemon chicken and lamb shank ($9.95 & $12.95) both includes a Greek salad and side, I would put up against a $20/$30+ meal at any table cloth full service restaurant. Their stuffed peppers are very good also.

That’s what I was thinking too. I really like the meat, but having a Tex-mex style tortilla is weird… I don’t understand why they did that… less spoilage?

The serving size is a little light for the price, and why don’t they offer fries as a side with the platter like every other place ever.

Price is high but it’s Mall Food Court surcharge appropriate in my opinion. The picture on the menu shows fries but the only offered me white or brown rice.

And their GREEN (not GreeK) salad is, imo, fantastic. It’s their version of the Prasini salad and I’ve now tried it at Apella, Stamna, and here, and the G Spot wins.

For 7.95 they STUFF a plastic bowl full of lettuce, a ton of fresh dill, scallions, and cheese. Also a few olives to try to ruin it, but I toss those… But I swear, if I get the dressing on the side, I get at least 3 healthy salads out of it.

Someone tell me again where the G Spot is. All this talk is making me want to go there ASAP.

For the map challenged, it is on rt 35 close to the AP circle right across the street from Wegmans.

Yeah, just go down two lights, make a left at the gas station not to far from the Wawa, if you miss it take the next jug handle by the dunikin donuts, take the parkway to 18 to the 66E exit and go around the AP circle 3x’s and you’ll be there!!! (or just look at my map!!)

Immediately after the Wells Fargo–in a tiny spot next to the laundromat.

So every knows I was just teasing seal with my previous response. Here to help give a visual to curlz

1.) Dunkin Donuts (if you reach this you have gone to far!!!)
2.) Laundromat that shares the building and parking lot with the Greek Spot
3.) Tiniest of all is the Greek Spot, tucked in next to the laundromat
4.) Wells Fargo Bank, just before you get to the entrance to The Greek Spot!!! 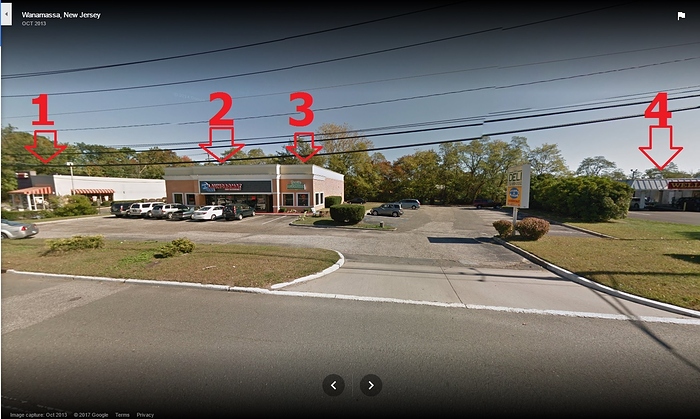 Thanks. I am so there.

I kid you not, though…the last time I was there I snagged a spot basically under the #3 (as shown above). I was on a phone call and stayed in the car to finish it while I watched a couple come from the side lot (between #s 3 and 4 as shown above), walk down the far left end (past the #2), and walk back to the side lot looking perplexed. They took a second lap and found the entrance.

Jr, and others, have you had any of the platters at gspot? That is what I want to try. I’m definitely going soon but I’m just wondering how they compare.

I prefer that over the traditional gyro. I like greek eats because you can get a boat load of food and the “sides” are pretty much unlimited (if you want to call them that.) They seem to not care as long as you can fit it in a plate…rice, feta, beans, slaw, pickled onions, olives, grape leaves, etc. My dish looks like a pyramid when I pay up lol. I always get two meals out of this place from a single dish.

I had the tzatziki on the side and it wasn’t great. It was too minty for me. I have to still hit the g spot but Greek eats is getting it done for me now. In fact, for ten bucks that is one of the best meals around for me.

I just got the salad instead of the gyro, is that what you said they pile high? Is there a secret handshake?

If you’re referring to greek eats, I get MONSTER plates there. Im just friendly with the staff and they freaking load it up. Just ask for extra helpings and they take care of you. I don’t think I’ll be ordering any chef gyro soon.