Hope to meet everyone else at the next one!

Photos only of our lovely meal and not the lovely company: wonton soup (“bone soup with wontons”; portioned); roast pig; pan-fried noodles with shrimp and vegetables; oysters with ginger and scallions; poached snow pea sprouts with three kinds of egg; sand ginger chicken (half); crispy flounder filet; and one square of a complimentary mango jelly dessert. I’m already looking forward to our next get-together! 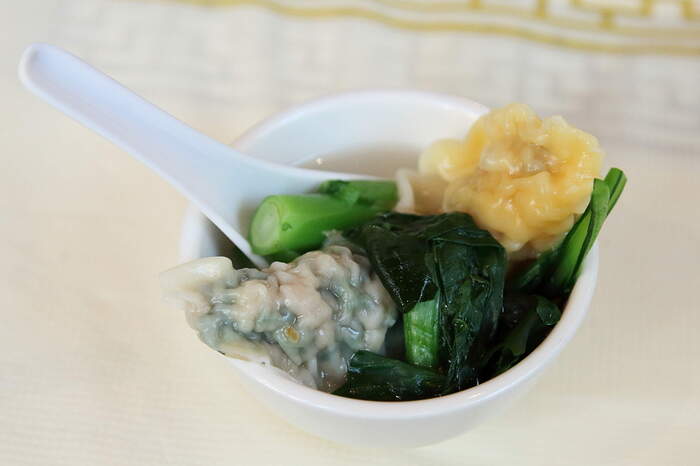 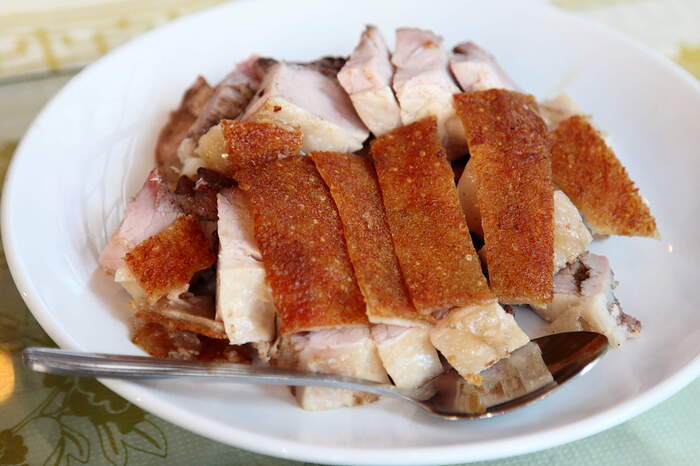 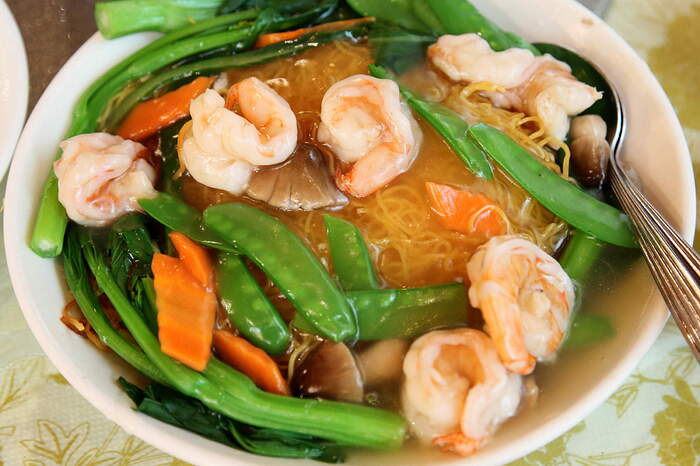 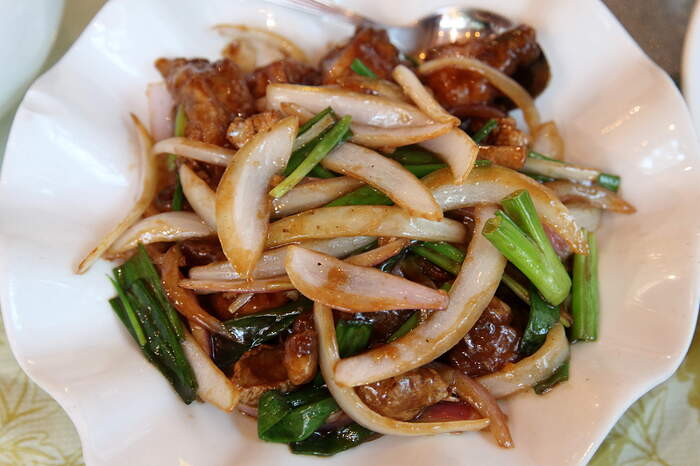 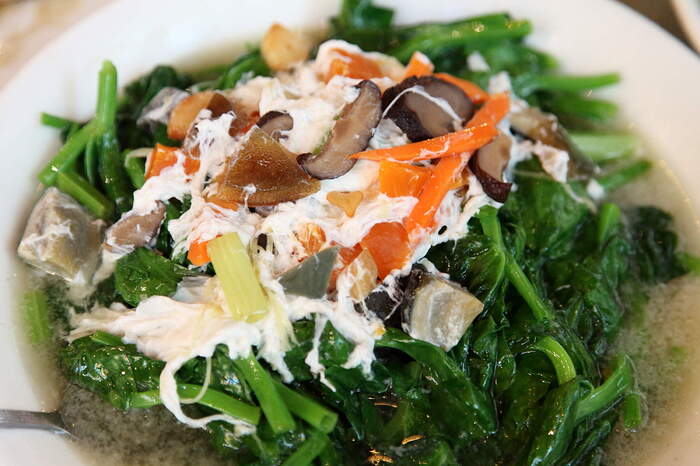 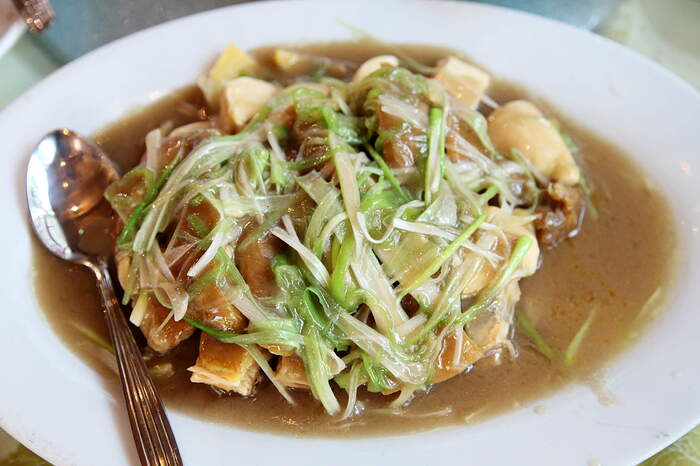 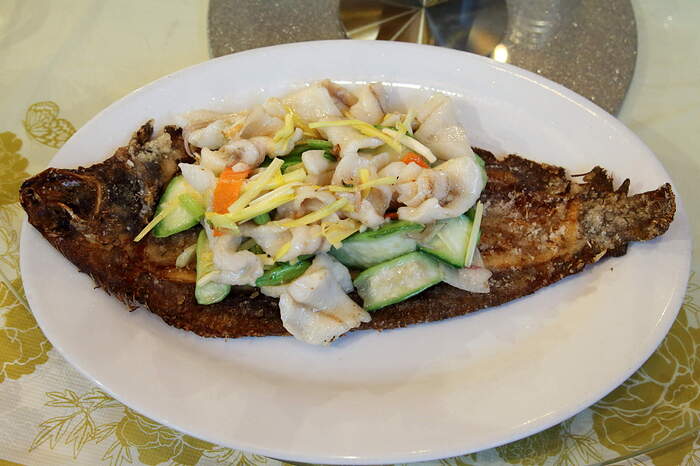 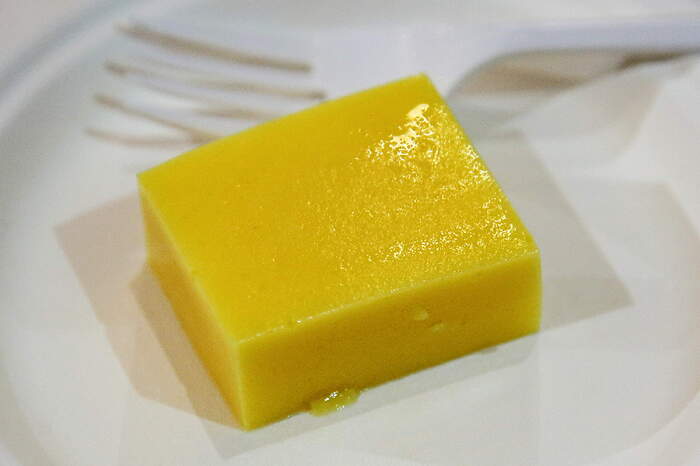 My 2c on what we ate (hope others will add theirs too):

I’ve been to Wu’s over a dozen times & still really like the Bone Soup w/Wontons. Including the broth. Dave & I both went over the various chicken dishes with the waiter and what came out was a dish I’ve never seen before. Not bad, but not any of the above – at least I don’t think so. The fish was a very interesting presentation. There’s another thread here on HO about Hoy Wong (now with a new name). In that thread, I linked to their great menu w/pictures. So, I went there (the linked menu, not the restaurant) today and they have that same fried flounder pictured, albeit without the flounder meat that was filleted and placed on top of our fish. Apparently a thing. I really liked the oyster dish, but I’ve never seen that one before either.
Overall, I really like Wu’s and will continue to return. However, this was definitely not the best food I’ve ever had there, even though I still found it better than just about anywhere else (for this type of Chinese cooking). Obviously, the star of the show was getting to meet others in real life & see old friends again. And to set the stage for more get togethers.

This was such a fun evening, and Dave’s pictures really do bring it all back.

I’m a little trepidatious about giving my food thoughts in this crowd, but here goes:

The chicken, soup and pork came out as a first course, and like @saregama, I held back for a while thinking that the saucy chicken was awaiting some rice, but it didn’t happen. Still, this dish was among my favorites of the evening. I confess that because I was raised by a woman who had delusions of Emily Post, I love anything with a bone or otherwise needs to be eaten by hand, and the messier the better! These bits of chicken all came with a little bone, and the sauce just made it that much more finger licking good.

The wonton soup was also a messy endeavor: Long green vegetable (somebody can chime in and say what that was?) that couldn’t be eaten in one bite, similarly the wontons had to be nibbled and slurped (I think I disappeared from conversation as I enjoyed these challenges).

The pork was my least favorite of the starters…I found it dry and sort of tasteless. I didn’t really understand the choice to serve it cold either…

I also was not happy with the crispy fish skeleton. It looked great, but I just couldn’t figure out how to eat it, nor what the point was. I swallowed at least one bone (not the thing I love about bones). The bits of actual fish were sort of slimy to me and maybe seemed like they had spent too much time in the fridge or freezer.

The dish with three eggs and lots of veggies was much more delicious to me than what it looked like. Ditto the one with oysters. In fact I liked all three of the veggie forward dishes (including the pan fried noodles).

As others have said, it was most of all fun to meet some of the people I have been interested in talking with for years. Who knew this was a possibility. I only hope that my table manners don’t foreclose a future invitation! I did try to be discreet.

I am coming up to Flushing the week of July 23=31 and would love to get together to eat. I know Steve from the DR board days.

Dean formerly from DC and Dino’s Grotto and now from Baltimore.

Hey Dean. Welcome to yet another food board. Sounds like we should put a group dinner together for sometime that week. On your visits here, have you gone to Golden Palace (now called Golden Palace Gourmet, I think) on Cherry Ave in Flushing? I’ve been to a # of group dinners there, so that might be the place unless you have some other place you want to try. By the way, I still miss both your D.C. restaurants. Speak soon.

count me in if it’s later in the week. I’m coming up on my ten-year colonoscopy, may as well load up my intestines with interesting food

sign that you’re getting old? you think you’re replying to a group pm but actually posting publicly. sigh…

dave, you are one talented photographer! well done!

I’d be excited about PDH. Also wine, but I can partake less on that front at the moment.

Hi Dean - welcome!
I’m sure a few people would be up for a Flushing meal, depending on who’s around that week.

I have no specific places I want to go to for a larger group. We found a skewer BBQ with outstanding cooked and skewers. Ming Xing on Farrington. The biggest tables are really only good for 6. But that could be a great casual meeting place.

And I would love to do a street food crawl around main and 41.

Also, I would love to do dinner at one of the Greek/Egyptian places in Astoria. We have been to Astora Seafood already.

Ok… two things come to mind. One, maybe Dave can set up a food crawl thing. The corner you mentioned is where the now closed Golden Mall used to be &, if I remember correctly, there’s a bunch of carts and small places in that immediate area that I’m sure he’ll know. Since he’s the expert on this stuff, maybe he can give some dates (afternoons?) that he’s available and we’ll go from there.
Secondly, you and I should use the messenger function on this site and map out which days you’re available and a (short) list of what you want to do & with how many others. This thread won’t work for all the tangents that this is gonna take. I can then work with the usual suspects and create some threads as needed. I’ve looked at my calendar and that week looks open for me so far except for the 25th. Sound ok?

Please see the new “Flushing Food Crawl” thread for further information or to join in. It’ll be the afternoon of Mon, 7/25.

Dave Cook is organizing a small group to walk around parts of Flushing, eating, talking, walking, eating & eating. So far, its Dave, me, saregama, Dean & his wife (visiting from Baltimore). According to our combined wisdom, 8 should be the max. Since there are already 5 of us, that leaves 3 spots open (max). Anyone want to join? Probably early afternoon for a couple of hours (or more).

Just to close the loop on the above, I wanted to let folks know that we also (in addition to the Flushing Food Crawl 7/25), had dinner with Dean & Kay at Mombar, one of my long time favorite Egyptian places on Steinway St in Astoria. I will start a thread on that dinner, held last night, so that folks can weigh in on what we ate & how much they liked (or didn’t like it). Sorry that this event wasn’t posted in advance, but we already had 10 people coming & the place couldn’t accommodate any more than that.