Tried this place tonight after I’d passed it previously when going to the Korean bbq place across Geary. They had carried over the sushi from the previous restaurant in this space, but have since stopped making sushi (although the menu they hand you is still labeled “sushi menu” on the cover despite the contents being only Mongolian dishes).

I was eating solo, so only ordered one item: the jimbii, which I don’t recall seeing before at other Mongolian places like Mongol Cafe in the TL. This was very tender pieces of bone-in lamb, apparently steamed, and laid in a muttony broth with carrots, potatoes, and scallions (maybe also onion) and a sheet of wheat noodle on top. I added a little salt - the chef’s hand with it was surprisingly light, which I didn’t mind. The couple eating next to me got the UB salad (which wikipedia suggests stems from, and is virtually identical to, the Russian olivie salad) and the huushuur, a golden brown fried beef pancake. Both looked good.

They also make khorkhog, the Mongolian BBQ cooked with hot stones, which I don’t think I’ve ever seen on a menu. It takes them 90-120 minutes to make it, so probably wise to call ahead for this.

If you enjoy a simple, hearty cuisine like Mongolian food, I think this restaurant is worth a try.

About a month a ago I returned here with two friends for the khorkhog. I called ahead the day before and they had no problem having it ready at the specified time. Definitely not for those afraid of lamb fat, but we enjoyed it. 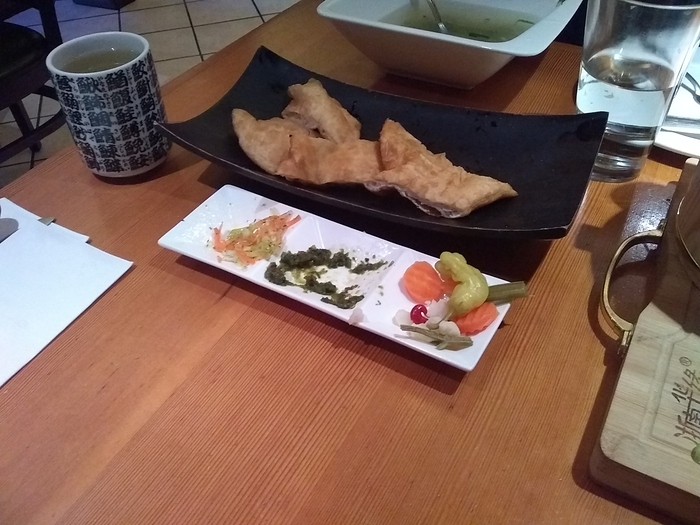 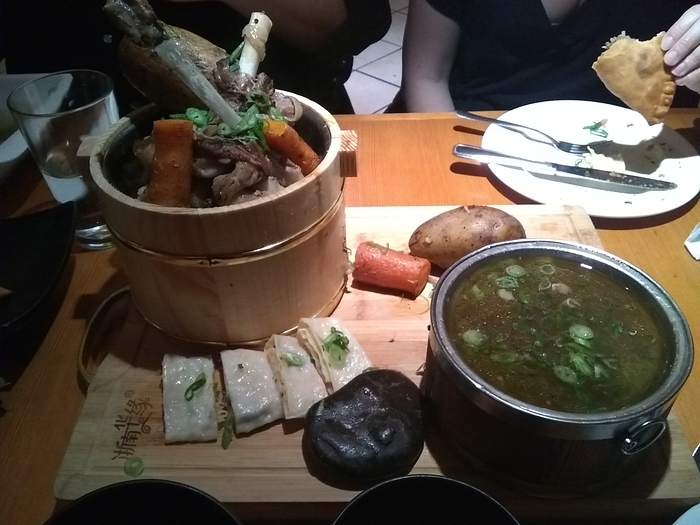 What is that dish in the bamboo looking container? Is it a shank? Is that a soup next to it?

Yeah, that’s the khorkhog - BBQed lamb shank and root veggies, presented with more veggies on the side, thin plain wheat dumplings, the stones used to cook it, and what I think is the fatty lamb broth that results from the cooking process.

Not familiar with the cooking with hot stones method. How do they cook it- heat the stones up real hot and ‘grill’ the shank on it?

Was the lamb broth for drinking?

No, it’s a wet cooking method (steaming/braising) a la true barbecue (as I understand it, grilling doesn’t count as barbecue to most Southern barbecue purists).

Since this was literally the first time I’d tried the dish, I can’t say I’m an expert in the exact cooking method. But this seems like a decent explanation of the basic process: https://www.mongolfood.info/en/recipes/khorkhog.html

If I remember, I sort of used the broth for dipping the dumplings/meat/veggies, though it sounds like some people also pour it over rice. On further reflection I’m not positive that bone was a shank - maybe it was one of the ribs.