I just tried the new Grand Master 95 on Chrystie St. I had the “classic” Carp, but steamed instead of fried with Black Bean Sauce, the “classic” Duck with Plum Sauce, Fried Oysters, and Pea Pod Tendrils in Broth. I used air-quotes for reasons you will see in a second.

Everything was excellent, and they have the added bonus of having a very extensive craft beer menu. The owners, Herman and BB (BB is a Canto nickname for “baby” since he was the youngest growing up.) are friendly Chinatown vets and they speak very good English. It turns out Grand Master 95 is really an iteration of the previous 95 HomeDish before, and quite possibly the 95 Fusion before that. The cooking at Fusion looked like it was related, but the menu at HomeDish is almost the same, and the pics look like the same chef. In fact it is the chef from HomeDish. BB LOVES BEER! He has a whole section dedicated to Grimm Brewery, which is his favorite, he has to wait weeks to get shipments of what he wants, limited supplies. He treated me and my dc to “Teddy Bear Picnic”, after we paid the bill and were walking out! We just chugged all together standing up and it was damn tasty. BB has very refined tastes in beer, I must say. The food was fantastic, my dc is a HK/Guongdong native and everything about it was right to hear, including the accent of the waitress. She rated the steamed carp as 85% as good as home, and she’s got good taste, she’s not just some FOB who will eat anything resembling the hometown goods.

Anyway, the Fried Oysters reminded me of the early Canto American food back when Chinatown was all Canto, the Pea Pod Tendrils as good as anything I had at Lake Pavilion etc, and the Duck in Plum Sauce was new to me and interesting and good, the sour sweet taste of it. It doesn’t look like it in photos, but you will get a ton of food. It’s like the huge wedding banquet Canto places, but only on smaller plates. Note how high up the food is piled lol.

The place itself is a garden level place with only the big table up front getting sunlight. The decorations are delightfully cheesy, a mix of AliExpress neon lights and HomeGoods paintings. The music is great, Red Hot Chili Peppers, Metallica, 80’s and 90’s. This is the best beer list in a Chinese restaurant in NYC. The logo is really strange and that’s what attracted me to it, very odd Gothic Lettering in a striking oragne and red. There are some tongue in cheek things here, such as “Meat Without Feet” (fish) on the menus. I think it’s from Herman’s son, who is 2nd gen, and visited while were eating with his wife.

It’s a very curious place, the food is great, the vibe is really cool. I think it’s one of the most interesting new places right now, even if the food has been there for a few years.

Herman and BB mentioned that the chef worked at a Michelin Guide mentioned place, I guess it would be 95 HomeDish, but I could not verify. Maybe it was another place. However, the old HomeDish menu does say that and some other award, “Bite of America”.

I’m gonna be back with a bigger crew and we are gonna wreck through the rest of the menu and pound some nice beers down. I always get Canto at Lake Pavilion but I am really impressed at this 4+ person operation. 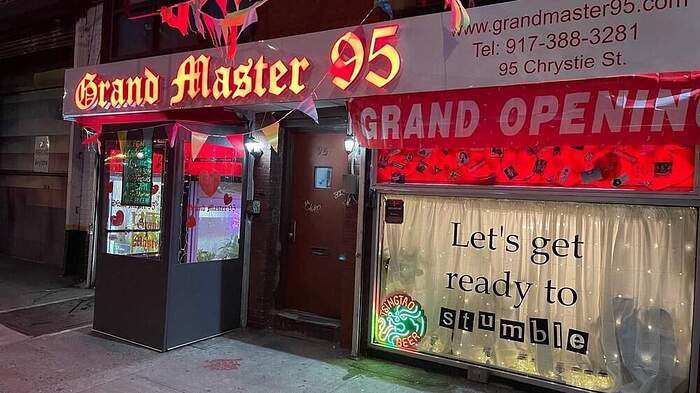 Thanks for this. Looking forward to checking it out.

Sure thing hope you enjoy.